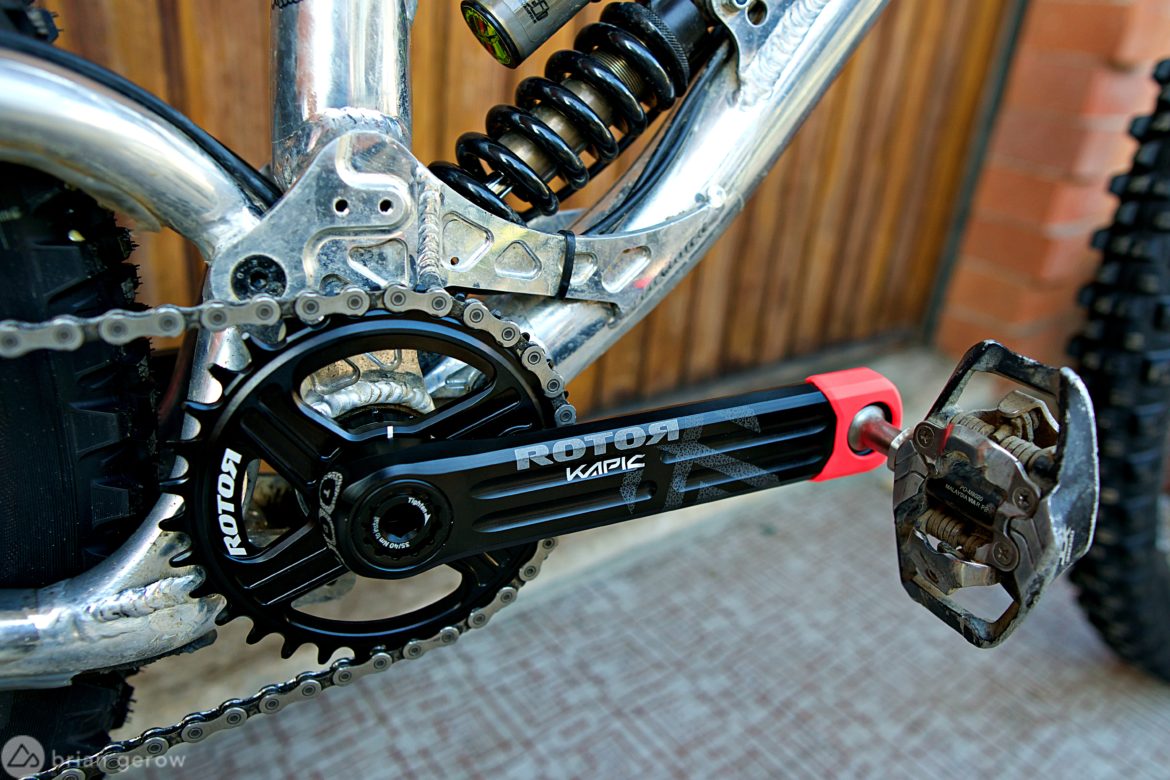 Rotor’s Kapic crankset is named after the famed Cape Epic marathon stage race in South Africa, and yet it’s tough enough for full-fledged gravity riding. In January I contacted Rotor to request a set of their cranks to test, and I let them know that I wanted a lightweight crankset that was tough enough to mount on my enduro race bike. Without hesitation, they recommended the Kapic.

The Kapic Crankset is a four-piece design, similar to modern BMX cranks. The 30mm hollow spindle feels as light as one bottom bracket (BB) cup in the hand, and the drilled-out hollow cranks are similarly feathery-light. Rotor makes a variety of bottom brackets to fit any frame, including a threaded model with an internal measurement of 30mm that allows riders to mount cranks with the larger spindle diameter in frames that traditionally would only accept a 24mm crank spindle. 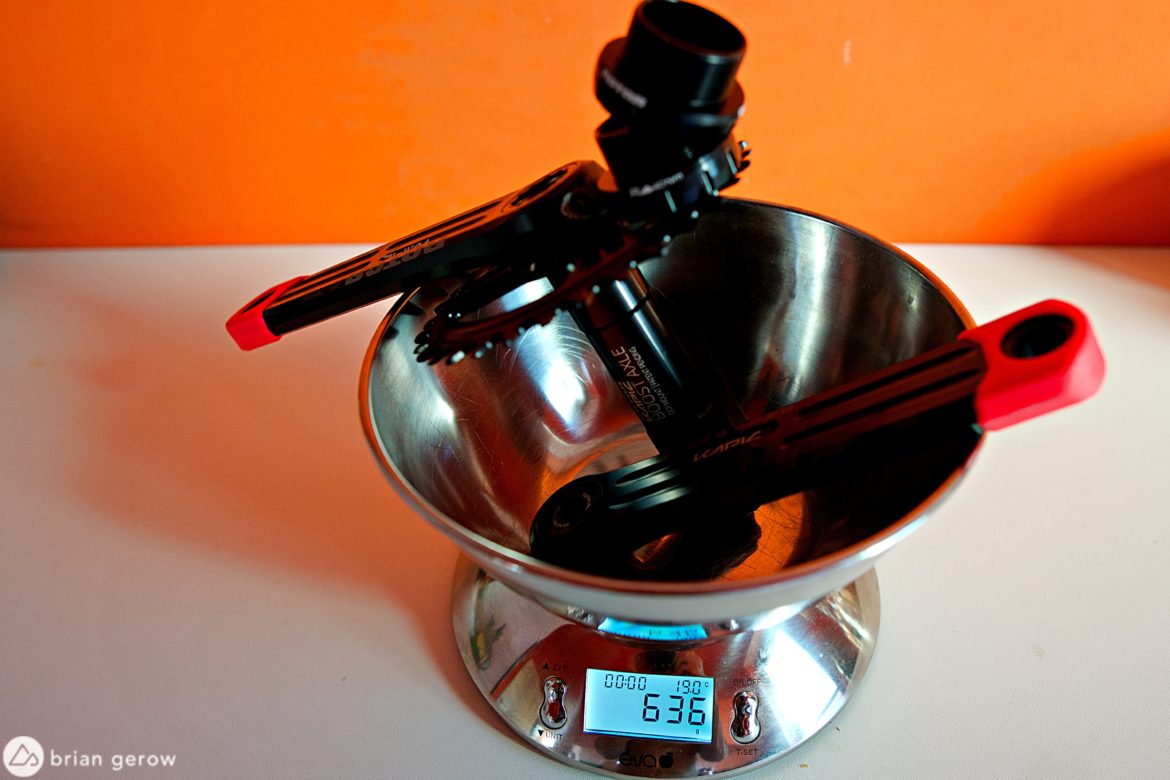 The crank, protective boots, chainring, and BB all together weigh about 70g less than an XT crankset by itself.

The connection points and tension tolerances for these cranks feel similar to most others I have tested, with precise machining and clearly indicated torque specs throughout. All of Rotor’s cranksets use 30mm spindles, so I tested their 30mm external BB to ensure they play well with my bike. I mounted the BB without the center tube, as there wasn’t enough space in my frame for it. 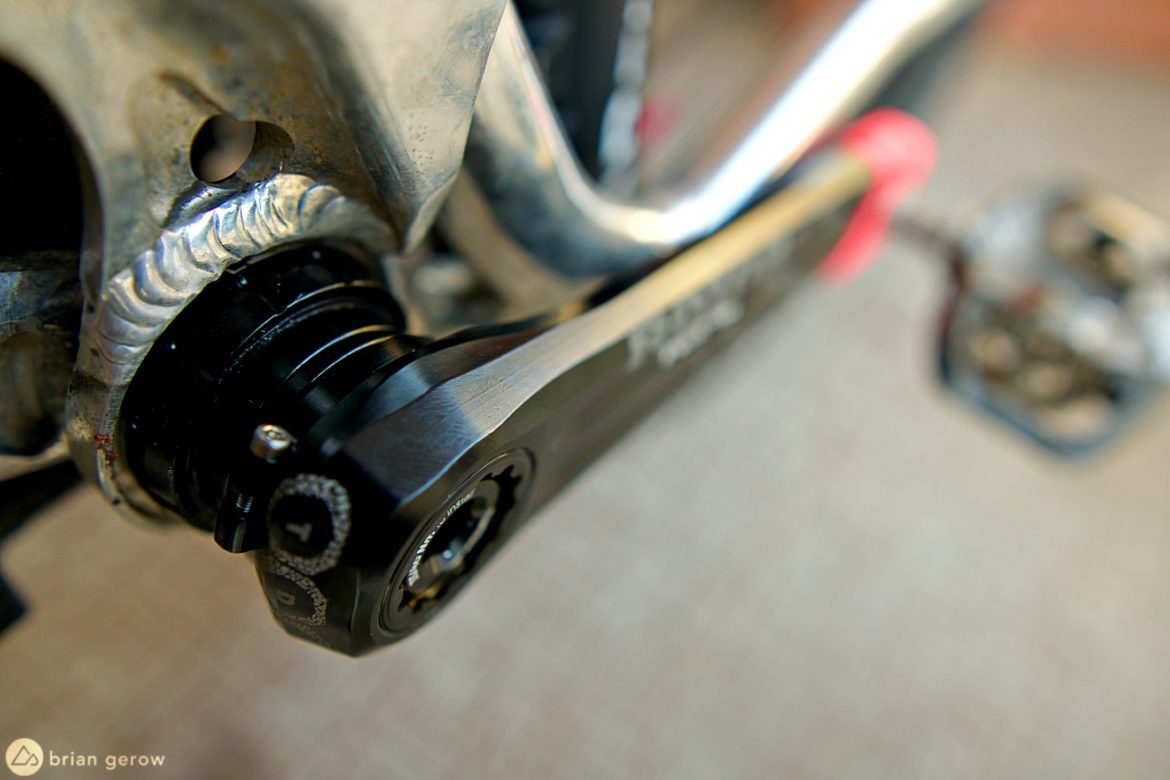 After installing the BB cups I inserted the crank spindle, then placed the recommended spacers where they needed to go for a proper Boost chainline. Finally, installing the direct-mount chainring and crank arms was a quick process, requiring a 10mm and 2mm hex key, and some grease. Rotor’s chainrings use a proprietary spline, so you will have to stick with their chainrings, for which they have a wide variety of round and oval options available.

The bearing preload ring on the non-driveside crank arm was a bit finicky and became stuck against the crank arm a couple of times while I was trying to adjust the tension. This was quickly remedied by removing the small 2mm hex-bolt that holds the preload ring in place, spreading the preload ring apart slightly, and removing it from the crank arm. I then reinstalled it by hand and tightened up the crankset.

The crankset’s primary mounting bolts at the center of either crank arm use a 10mm hex key, which is a heavy tool to carry on the trail. You will want to make sure that the spindle and mounting hardware is well greased and properly torqued before heading out for a ride, to avoid the awkward single-legged pedal home.

I ride 170mm length cranks because I like to have as much ground clearance as possible. Given the low BB height of most modern enduro bikes, 5mm shorter crank arms can make a surprising difference in where you can pedal and where you will have to ratchet the cranks on technical tracks. Nearly all of my testing with the Kapic crankset was done with a 32-tooth round chainring. I tried the oval Q-Ring on a few rides, but I don’t have enough experience with it to write anything conclusive.

The Kapic cranks have performed fantastically over the past few months, with very few issues to speak of. They feel every bit as stiff as the Shimano XT cranks that I was riding previously. I weigh about 70kg (154lbs) and I am certainly not the most powerful sprinter on the trail, but I have noticed very little flex in the Kapic cranks thus far. I had the chance to slam the cranks into a good number of rocks, slashing through two sets of Rotor’s rubber protective boots, and the crank arms took the banging without issue.

I had a problem early on with the spindle spacers squeaking at one point, and I was able to silence them by removing the crank arms and spacers, then cleaning and re-greasing them.

I also banged the chainring numerous times while trying to clear stumps or stones, so I like how easy it is to remove the ring for inspection. Once you remove the driveside crank arm you can simply pull the chainring off of the spindle, then lie it on a flat surface and check for unwanted aberrations. The original ring that came with the Kapic cranks remains perfectly round, and its teeth have retained their original chain-gripping shape. I was impressed that the teeth didn’t deform or “Sharktooth” after all of the time I spent cramming them full of mud and grit this winter; the alloy has held strong.

The bottom bracket performed flawlessly until its sudden death, a few weeks ago. It started making noise, and when I checked the bearings they both felt gritty and in need of replacement. I am consistently hard on components, but I would have expected the bearings to last longer than they did, and I might search for a different manufacturer to replace them.

Given the crankset’s feathery weight, I was a bit skeptical that they would be stiff enough to take all of the rock strikes and sprinting that I had planned for this bike. The Kapic cranks have performed admirably in terms of stiffness, maintenance, and durability. I am happy to keep pedaling them into the future. I would have expected the BB and crank-protectors to last longer than they did, but these are inexpensive parts that are easy to replace.

The proprietary chainring and the small number of companies making threaded external bottom brackets for 30mm spindles do limit those options for the Kapic crank. Depending on your frame’s BB style you may want to research some BB manufacturers before picking up a set of these cranks. There are a few options available, though they may not be in stock at your local bike shop.

Thanks to Rotor for sending the Kapic Crankset for review.