During my recent media trip to Park City, I had the immense delight to spend four days of hard riding beating a brand-new, just off the Interbike showroom floor, 2014 Scott Genius LT 710 into submission. 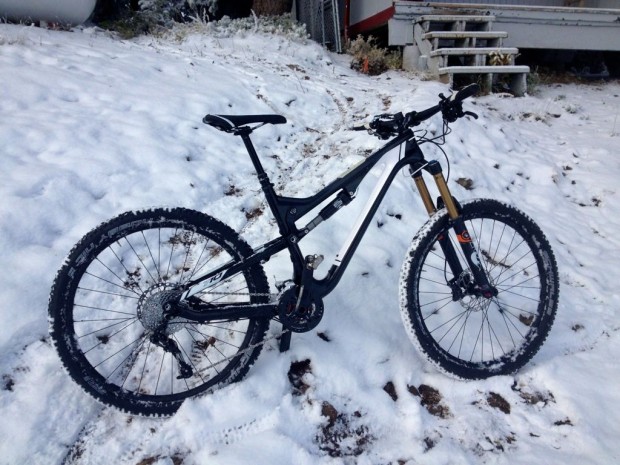 At the 2012 Interbike, Scott was one of the largest companies displaying a full complement of 650b/27.5 mountain bikes. While 2013 was a whole different story, with just about every company sporting a 650b bike (if not multiple bikes), Scott has been dialing in their 650b geometry for years. The 650b/27.5 Genius LT 700 series is the result of years of progression and enhancement.

The Genius LT 710 is undoubtedly an all-mountain slayer, complete with a 67.9-degree head tube angle, long-and-low geometry,  170mm of travel front-and-back, and an aggressive component setup.

While the 700 is available in a number of different build kits, the 710 features a  34mm Fox Float CTD fork up front, custom-tuned Fox Nude / Scott Custom shock in the rear, and a TwinLoc handlebar remote to control the three compression settings. The drivetrain is  SRAM X9/X7 with a clutch-style rear derailleur and Shimano SLX brakes. Syncros  XC67 wheels handle rolling duties, and a stock Rock Shox Reverb Stealth dropper post makes for an excellent touch when compared to all of the FS bikes that don’t ship with a stock dropper.

Despite a full 150mm of travel, this carbon-framed wonder bike weighs in at a scant 27.5lbs. 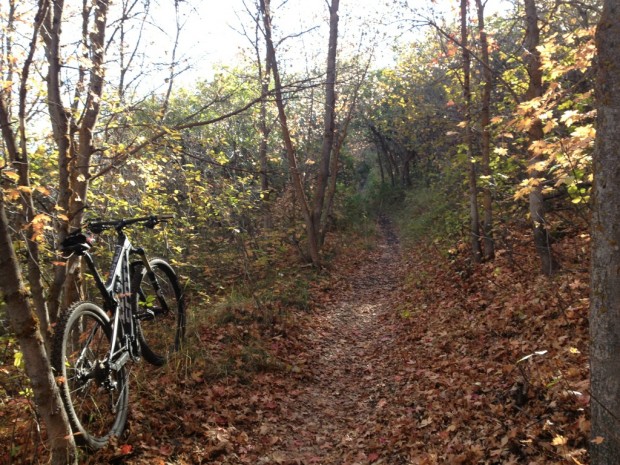 While I only got to spend four days aboard the Genius LT 710, those four days were packed full of thrashing. We pinned it on numerous back-to-back shuttle runs on chunder-filled trails, smooth terrain, pedal-driven loop-style rides, chairlift laps on all-mountain terrain, and even tore up the local dirt jump park. All told, I put in over 75 miles of riding in a few short days aboard the Genius.

Sometimes it takes a little while for me to get acquainted with a new bike. Not so with the Genius LT 170. Hopping on board, this bike felt natural and dialed after standard cockpit, suspension, and seat setup.

Despite switching from smooth, flowy terrain to rocky gnar, to jump lines, to steep-and-fast, and then finally to XC, the Genius took absolutely everything in stride. The 27.5 wheels, 150mm of travel, and dialed geometry made descending challenging terrain a joke. The joke is even calling it “challenging” aboard this bike. 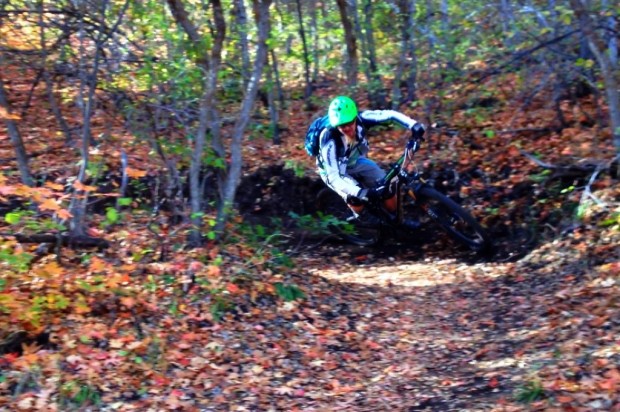 The 150mm of suspension soaked up everything from rock gardens to off-balance jump landings and drops. While I’ve ridden 150mm 650b all-mountain bikes that lean more toward the nimble/playful end of the spectrum (check out my Santa Cruz Bronson review here), I definitely felt like the Genius LT favored an aggressive bull-moose approach to riding. Pick a line and shoot, and the Genius will plough straight through. Of course, many of the guys I was riding with chose to get stylish on their rigs. Since I tend to favor a hard-charging riding style whenever my bike can keep up, it’s quite possible that the Genius LT 700 is just versatile and competent enough to accommodate riders of both styles.

For some GoPro footage from my time aboard the Genius LT 700 in Park City, check out this video:

And for some killer footage of some real riders putting the Scott Genius LT 700 through its paces, check out this video of Brendan Fairclough and Nino Schurter (talk about two different riding styles) riding the EWS final in Finale Ligure, Italy: 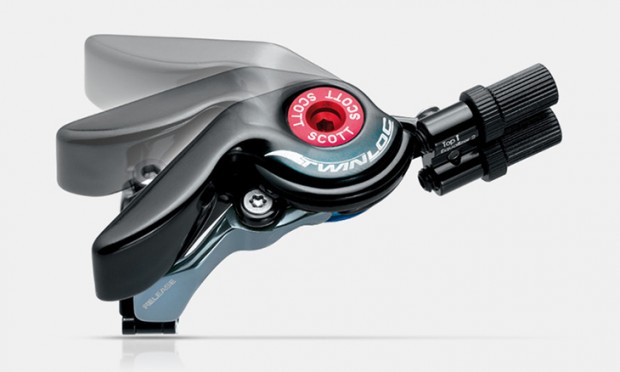 While the Genius LT 710 would be a fantastic bike in its own right, the one feature that really makes this rig stand above the rest is the TwinLoc suspension remote. Yeah, that’s right: I’m claiming that a handlebar remote is the most outstanding feature on this entire bike.

The TwinLoc remote is mechanically connected (ie via cable, not electronics) to the rebound-adjust dials on both the Fox CTD fork and the CTD shock. In case you aren’t aware, Fox’s CTD acronym stands for the three rebound settings: climb, trail, descend. The TwinLoc remote quickly and intuitively flips between those three settings on the fork and the shock simultaneously.

Push the upper black lever forward one click and it switches from descend to trail. Push it all the way forward, and the fork and shock simultaneously switch from trail to climb. Then, to dial back up the travel amount, click the silver lever to release the spring tension and drop back down to trail. Click it a second time and drop back into descend mode. If you want to jump all the way from descend to climb, you can do that in one fluid motion, and you can rapidly double click down from climb to descend almost instantaneously.

While this TwinLoc remote sounds simple, the implications on the trail are huge. It solves a number of suspension-adjustment problems that you might not have even known that you’ve been struggling with:

While several seconds might not sound like much, if you’re coming into a short, punchy climb or you suddenly drop into a rock garden after rounding a blind corner, a few seconds can mean all the difference in the world. With the TwinLoc, you can change your suspension rebound as quickly as you would shift gears or drop your seatpost… actually, make that even faster, as the cranks don’t need to be moving and you don’t have to push the seat down with your body weight. To adjust both your fork and shock rebound, all you have to do is push one lever.

Problem 2: Adjusting shock rebound requires you to take your hand off the bars.

While many forks have featured handlebar remotes in the past, until recently rear shocks have not. Taking your hand off the bars to adjust the rear shock drastically reduces your control of the bike, since not only do you only have one hand on the bar, but your balance is all off as you try to reach down and fiddle with an unseen lever beneath your top tube. This summer, a local Salida rider was airlifted off the Monarch Crest Trail after suffering a serious crash and injury while trying to adjust his shock, according to an article published in The Mountain Mail. Don’t be that guy.

Personally, when I do lock out my shock and fork for a long climb, I often forget to unlock them when it comes time to descend. With the dials out of sight, you can be sure they’re out of mind. Since the TwinLoc is always in your peripheral vision, you can instantaneously tell what setting you have your suspension set to. There’s no more guesswork, and no more forgetting until half-way down the descent.

Electronic suspension adjustment was big news at Interbike 2012, but ornery-uptight-mountain-bike-journalist that I am, I instantly thought to myself: “I’m never putting a single electronic component on my mountain bike.” With this cable-actuated system as easy to adjust as it is, there’s absolutely no reason to go with an electronic servo motor.

Granted, I have seen other bikes at expos that feature similar remote controls for suspension from companies other than Fox, but the Scott Genius LT 710 is the only stock bike I’ve ridden that has implemented such an intuitive dual-control remote.

In my opinion, the TwinLoc is the biggest advancement in on-the-fly bike adjustment and control since the dropper post. After spending four days of quality time with the TwinLoc, I am going to look for it or a similar equivalent on every bike that I ride from here on out. And if I don’t find one, I’m going to complain about it here on Singletracks.com until these remotes become a standard stock spec on high-end mountain bikes

The Scott Genius LT 710 is hands-down one of the best mountain bikes I’ve ever ridden. With fantastic on-the-fly adjustability, extremely light weight for an all-mount rig, spot-on geometry, and superb overall performance, I have to honestly say that while I was stoked to ride the fantastic singletrack in Park City, I was almost just as stoked to be riding such a fantastic bike.

Now THAT sounds like a fun bike. You didn’t come right out and say it, but it sounds like you enjoyed riding it more than the Bronson…even without the TwinLoc feature. I have a friend with a Genius 26er and he shreds on that thing…

Oh, I hands-down had more fun on the genius than I did on the Bronson, but I think a lot of that is simply because the Genius LT really caters more to my preferred riding style (like a bull in the china shop)… and now I think that any bike without a TwinLoc is lacking 😉

I test rode the Bronson C with XTR and ENVE wheels for about 2 hours. It was on a local trail that is not very technical, except for very steep climbs and rocky fast descents. I wasn’t as impressed with it as I thought I would be, and while I was riding it I was daydreaming about riding my own bike, the Niner RIP.9.RDO (half the price). It did not climb as well as my Niner, and definitely was not as stable roaring downhill over loose chunder. I imagine that with a slacker head angle, smaller wheels, and more travel I would have had a blast on a tight rocky trail with drops…but I only ride features like that about 10% of the time and my Niner handles them just fine anyway. The only jumps I ever back off on while riding my 29er are 6-8 foot drops…and that’s not the bike…that’s me. I’m chicken..plus I work for a living and I like to live to ride another day. The SC Bronson is undoubtedly an amazing bike….in fact I think of it as the definition of what 27.5in bikes were meant to do…but that also speaks to the heart of the wheel size debate: it all depends on what kind of riding you want to do, and where (it’s still hard to huck a Huffy off of the ‘Diving Board’). It’s not only the bike, but also it’s the rider. I have friends on ‘older’ Yeti 26ers that slay me on drops and are better riders than me overall…but then there are parts of trails where my 29er kills them too. I don’t think riding a Bronson or a Genius would give me any more courage or skill…unless I was coming from a hardtail or an older bike. Bottom line: you nailed it. You can put your leg over a lot of newer bikes and fall in love with any of them, but there will be a select few that accommodate or improve your riding style more than others.

I’m a twinloc addict, too. I’m between a spark and a genius 910 right now. Can’t decide how much travel I really want. If I can afford a new hardtail too, then the deal is sealed with the genius.

It doesn’t sound like you were on the LT model, though. I think that comes with a 34 and 170mm of travel. It’s an even more impressive review if it was the lower travel bike.

Good catch. Since I didn’t have the bike with me anymore when I wrote the article, it turns out I pulled the wrong stats from Scott’s website. I’ve updated the post with the correct stats for the LT 710 2014 model.

I couldn’t agree more on the Twin-Loc .. all FS bikes should have this.

I got a chance to ride the non-LT Genius at Outerbike and it is a solid performer.