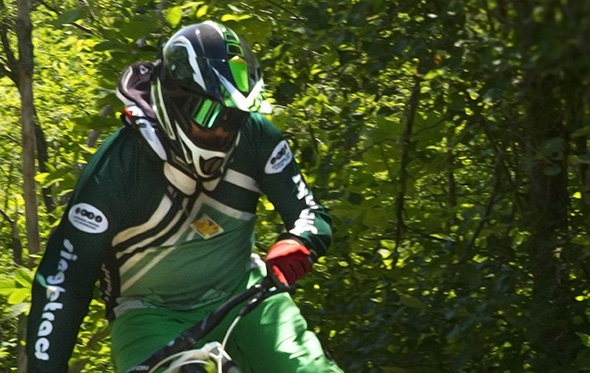 As a long-time downhill mountain biker I find that I am constantly pushing myself to get better, faster, go bigger, etc. Over the years, I have had my fair share of over the bar excursions. Landing on one’s head is never fun. Having done so with a Leatt, and walking away from the crash, is also not fun… but hey, I’m still here. During the brutal crash I just mentioned I was wearing Leatt’s flagship brace (at the time), the DBX Pro. As I said, I walked away, and the brace did exactly what it was intended to do.

Fast forward to the beginning of this season: I received a new DBX Comp 4 Neck Brace to review. Leatt redesigned their best-selling bicycle neck brace, the Comp 3, and named it the Comp 4. 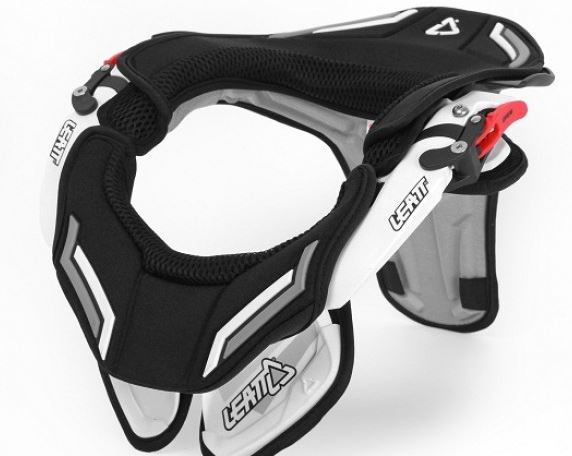 The brace chassis is still constructed from Leatt’s high impact polymer (LHIP), but the front has been completely re-sculpted, now using a split design that was pioneered by the Leatt STX brace in 2011. The split allows for independent movement of the two “wings” for increased comfort and better fit. The “split” design can be found in the wider rear thoracic strut. This strut, called CoreFlex, allows the rear, downward “fingers” to flex independently of each other during operation. 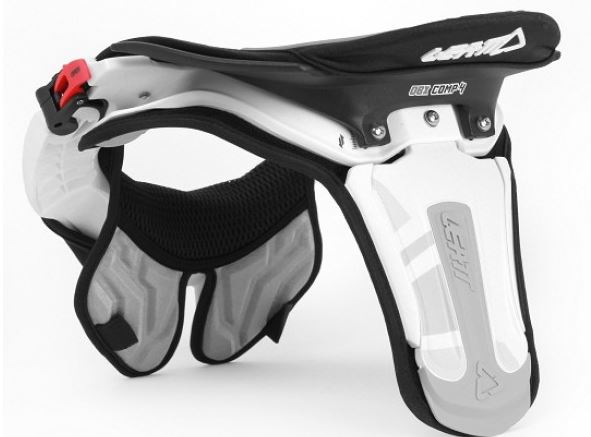 For that perfect fit, the Comp 4 uses a  rear table height adjustment with 28mm of travel, providing the safest way to mesh the brace with your helmet, your body shape, and your riding style. Using Leatt’s patented Alternative Load Path Technology (ALPT), the Comp 4 is, like all other Leatt braces, CE certified as personal protection, PPE 89/686/ee. 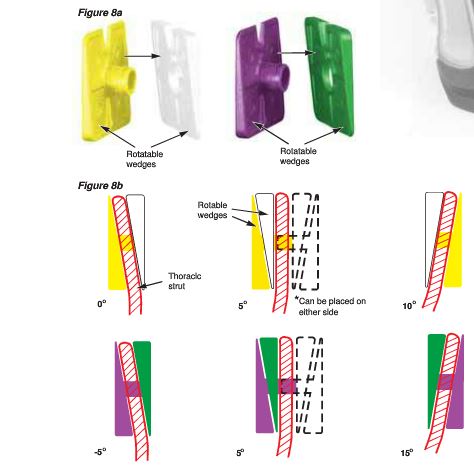 A host of other features have found their way into the new Comp 4. New color-coded rear thoracic strut angle wedges provide easier angle adjustment. Not only is it easier to adjust, but the brace now offers a wider range of adjustment in the rear thoracic strut, with -5°, 0°, 5°, 10°, and 15° for the perfect fit. Rear height adjustment matches helmet clearance as well as matches the rider’s preferences. A wide assortment of newly-redesigned hinges help further tune and allow for greater chest depths. 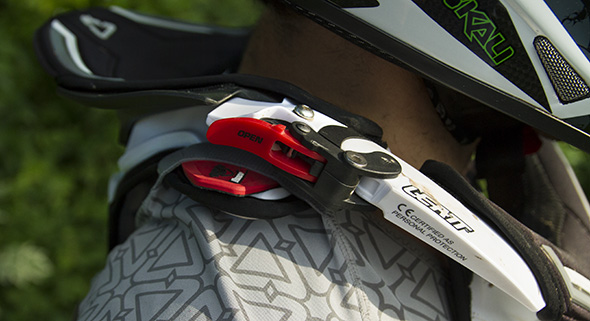 The side hinges are clearly marked, making it easier for Paramedics to removed the brace on the left or right side. As with all Leatt braces, the brace has clearance cutouts around the clavicles to prevent possible fractures. A redesigned optional clear strap comes included, but was not reviewed as I used the hoops from the Leatt chest protector.

The brace is available in small/medium or large/x-large sizes.

The single most important thing with all safety gear (I’m starting to sound like a broken record) is to try before you buy and follow all instructions carefully during set up. Leatt literally provides a small book of instructions, so be prepared to spend a good hour setting up your own brace. All the tools you need come with the Comp 4, as well as all the extra spacer clips and chips. 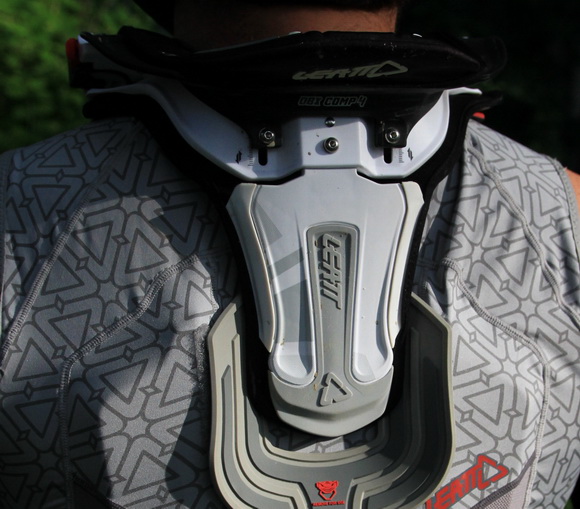 Due to the important nature of fitting the Leatt I won’t go over the setup process, but will say that when you do set up your brace, it might be wise to read over the instructions twice. Do not be afraid to experiment with the settings until you feel comfortable with the Leatt. The measuring portion of the setup would be best done with a friend reading off the front and rear measurements. 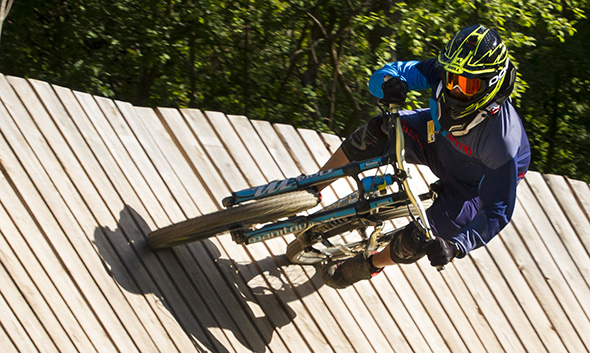 Using the Leatt has become second nature for me. I have never had a single issue with any of my Leatt braces. I feel comfortable and confident knowing the brace is there when I need it, and have had a major accident with one on (crashed so badly that I actually fractured the rear thoracic support on my Pro) with no harm to my person other than a badly bruised ego.

I choose to run the brace with no straps (which Leatt provides) and use the hoops from the armor instead. At times, when I don’t use upper armor, I still don’t use straps. I found that with careful setup, the brace barely moves at all.

For an MSRP of $359, I think the DBX Comp 4 is worth every penny. For those of you who are considering one, last year’s Comp 3 retailed for $40 more. Not only has Leatt been improving their models, but they’ve also found ways to reduce the cost at the same time!

A big thanks to the folks at Leatt for sending down the Comp 4 for review.

I see to many riders on the slopes not choosing to protect themselves. Knowing the patrol very well at Blue, we talk often. And to often I hear about people leaving in an ambulance with head and neck injuries. Not being overly cautious, but I feel if the technology exists to reduce the chances of injuries, then people should take it.