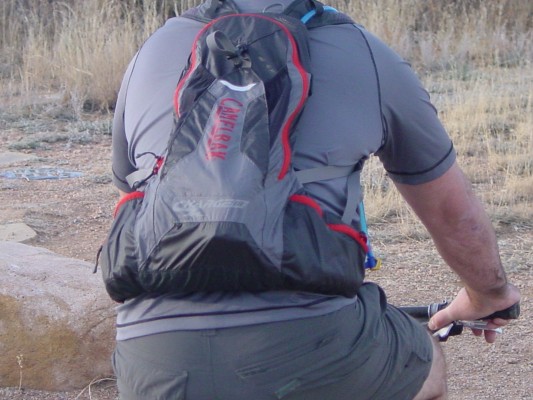 Having not purchased a new, lower-capacity hydration pack for short rides since my first Camelbak in 2000, I jumped at the opportunity to review the Camelbak Charge 10LR.  When I reviewed the larger capacity Dakine AMP 12L a few months ago, I marveled at the features now being incorporated into modern hydration packs relative to those early, primitive models.  I was anxious to see if that trend had hit the 70oz packs as it had the 100oz packs, and I was not disappointed.  The Charge 10LR is a marvel of trickle-down technology… and incorporated a few new tricks of its own for good measure.  Lets look at those features and how they perform in real riding conditions.

Before we get into the unique features, let’s cover some of the basics.

Among the newer features, the first thing I noticed was the hip belt.  This reminded me of another progression, one that took place in the backpacking world and has now found its way into smaller hydration packs.

I went a very long time before buying a quality backpack to replace the painful old packs of my youth.  When I finally did, I marveled at the hip belt, which did an amazing job of redistributing weight off the shoulders and placing it on the hips, making it much easier to carry heavier loads further with less fatigue.

Now, that same hip belt shows up on many hydration packs, including this little 70-ouncer.  Moreover, like my sweet, new backpack, this hip belt also contains a zipper covering a small storage area within the hip belt itself, again placing the weight where it is most easily supported. The hip belt pockets also make for easy access: you can now grab those gel packs or energy chews without breaking stride.

Verdict on the hip belt:  This backpacking innovation translates nicely to the small hydration pack, although it’s not entirely necessary.  This is a small capacity pack, so it’s not going to be carrying a lot of weight.   Furthermore, given the shorter-ride nature of this pack, I’m not going to be needing those power bars or gels which are now so easily accessed.  Again, there’s nothing wrong with adding these features, they just might not get used a lot.

The next feature that grabbed my eye, and an even bigger departure from tradition than the hip belt, was the placement of the reservoir.  Rather than running vertically up the spine, the reservoir in the Charge 10L runs horizontally across the lower back, with arms extending into the hip belt.   This is yet another feature designed to distribute weight into the most comfortable and stable configuration possible.

Verdict on the bladder arrangement:  For me, this was a mixed bag.  There’s no doubt this placement of the bulk of the weight (water) near the rider’s center of mass contributes to the pack’s unshakeable nature.  Again, this is just a 2L reservoir, so we’re not needing to secure a lot of weight in the first place.  I also had three problems with the layout:

In the end, I saw this pack as one with a bit of an identity crisis–like a hardtail with a 6” fork, what exactly are you supposed to do with it?  The Charge 10LR has many of the features and capabilities of an all day pack, but has the smaller liquid capacity of a pack for shorter rides.

It’s important to repeat that there’s nothing wrong with the pack, but if I was to buy another 2L-type pack, I would likely opt for the simpler Camelbak Rogue, which strikes the efficiency freak in me as more appropriate for the quick rides and comes in at a mere $68 MSRP versus the $110 MSRP for the Charge.

The Charge 10LR is more likely to be right for you if you can get by with 2L on a 3+hour ride (I usually can’t, especially in the warmer months), but still want easy access to your goodies after the ride has begun. It’s also a superb choice if you prize load stability above all else.

Thanks to Camelback for sending the Charge 10LR over for review.

Great review. I often wondered how it would feel to have more water distributed across the hips after the hydration fanny-pack craze a few years ago. I also agree with most if not all of your points: I want a smaller grab and go back to be just that, with no fuss. I’ve found that my Camelback Octane does a great job at a double duty.