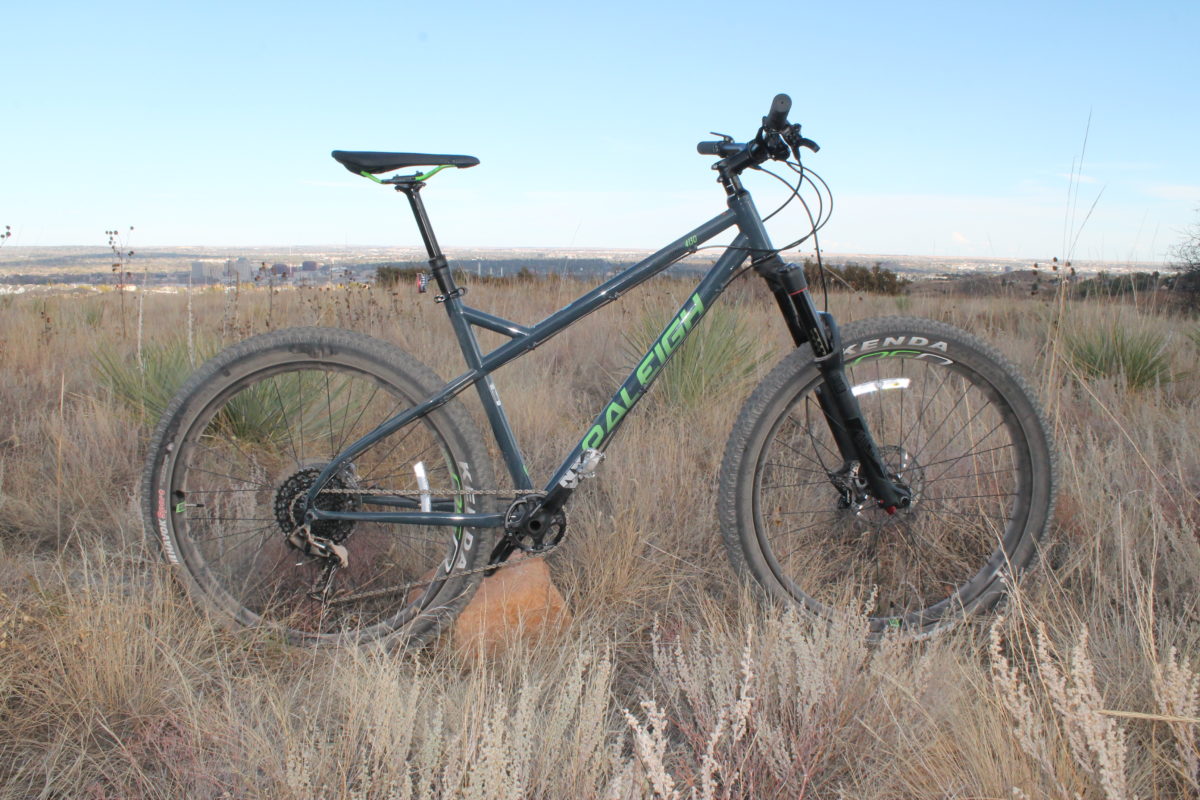 Raleigh Bikes and the Tokul 4130

Founded way back in 1885 and having survived countless changes in the market, boom and bust cycles, and shifts in consumer preferences, Raleigh is one of the most venerable names in the bicycle industry.  While Raleigh has enjoyed occasional success at the upper end of the product line, these days their bread and butter is quality, but entry to mid-level bikes designed to provide better bang for the buck. The Tokul 4130 fits right into this niche.

When plus-size bikes started catching on, there was little to choose from in a quality hardtail. An affordable fully rigid plus bike was easy to find, but as soon as someone slapped a suspension fork on a plus-size bike, it also seemed to come with all other sorts of upgrades and a basic $1,000 sticker price suddenly jumped to more than two and a half times that. Raleigh spotted this gap and jumped in with a front-suspended plus bike carrying a more midpoint spec and price. 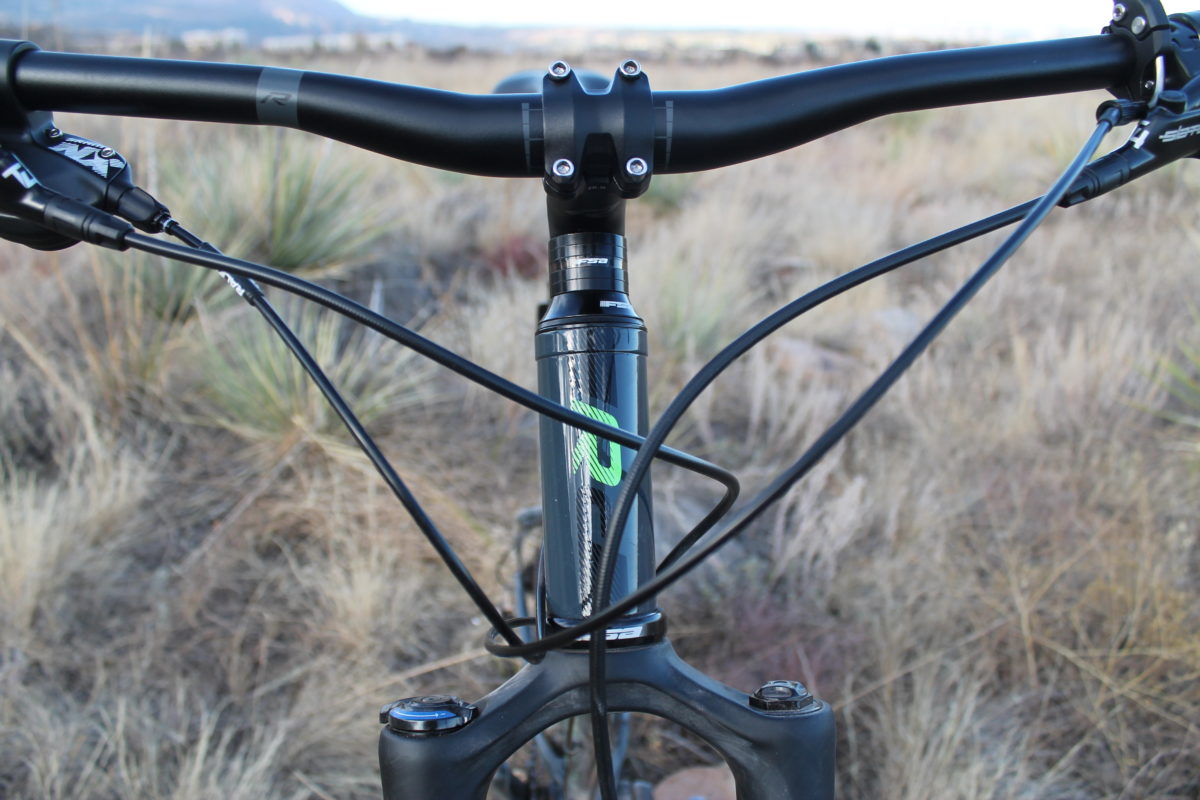 Originally introduced in 2014, the Tokul 4130 has enjoyed modest upgrades each year, and the 2017 model is fully mature. With boost spacing, 1×11 drivetrain, and a dropper post, the Tokul 4130 has most of the goodies we’ve come to expect on a modern mountain bike.  All these goodies and the plus size wheels are hung on a fame of more traditional 4130 chromoly steel. The dropper post is a JD Stealth 125mm and the drivetrain is SRAM’s new affordable NX.  The rest of the parts kit includes a 130mm-travel RockShox Yari fork, TRP Slate T4 bakes, Weinmann rims spinning Kenda Havoc 2.8” tires, and a host of house brand components.   Raleigh delivers this package at an MSRP of $1,799. 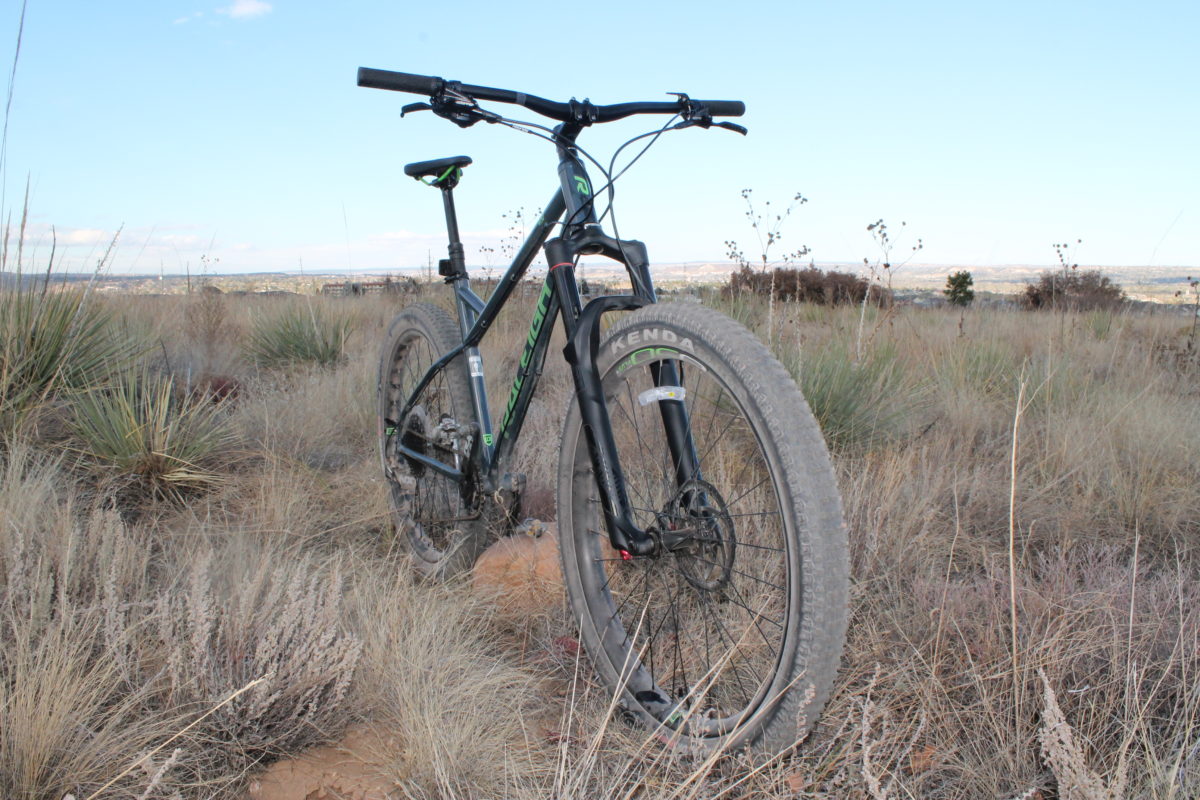 At a hair under 6’ even, I’m at the high end of the recommended range for a size L, which is what I had. Since I generally like a long cockpit, the XL may have been a better choice for me. I compensated by sliding the saddle back to the extreme limits of the rails. In my opinion, the Tokul felt taller than other bikes in its category. This is due in part to the bottom bracket sitting 10-30 mm higher than other bikes in this category.

After riding a few miles, any concerns about the shortness of the cockpit on the size large disappeared. While a longer XL cockpit may be desirable for stability at high speeds, the big tires compensated nicely and helped maintain comfort when cranking up the speed. However, despite the big tires, this is still a hardtail and will buck a bit if recklessly charged into the gnar. The good news is that the stability and comfort makes recoveries relatively easy, and the wheelbase also allows easy negotiation of tight, technical switchbacks.

The second thing I noticed about the Tokul 4130 is the weight.  When you combine a steel frame with big wheels, a dropper post, and house-brand components, you get a bike that tops the 34lb mark. The weight makes itself known when charging long climbs on steep grades, which is the predominate trail configuration in my area.

The plus side to this steel frame combined with the big wheels is the stability and comfort provided. The Tokul 4130 always feels well-grounded; a sort of security blanket for the rider.  That comfort and rider-friendly character really made itself apparent when I headed from Colorado Springs to Pueblo, where the thousand-foot climbs give way to more level prairie and roller coaster terrain. The bike spun up and maintained momentum through all the dips and shorter climbs.

The upright riding position provided by the cockpit allowed me to ride comfortably over the longer distances the Lake Pueblo network offers.  The big tires transitioned seamlessly between hardpack, sand, gravel, and both loose and embedded rock.  Not only did the bike “handle” these conditions, it made them an absolute pleasure to ride.  This became one of my most joyful test rides on any bike. By the time I returned to my vehicle, I had logged 44 miles; the first time I had done over 40 miles in 7 years, and it wasn’t a sufferfest, but rather every mile reveling in the ecstasy that comes when bike and rider and trail blend into a seamless unit.

The third thing I noticed about the Tokul 4130 is the handling.  Not only was it a hugely fun bike to bob and weave through twisty trails, it did so while being a great learning platform.  All bikes give some feedback to the rider on the quality of their cornering technique. Most bikes, especially twitchy cross country types, punish bad technique, which can be demoralizing to a novice rider. The Tokul 4130 on the other hand, generally forgives bad technique, but at the other end of the spectrum, really rewards good technique. You can really feel the bike telling you when you’re doing well, and it invites you to take those positive motions even further.  Just drop that inside knee into the turn a bit and the bike communicates how good that works.  Raise that outside elbow and again, it tells you you’re doing it right.  Apply a little counter pressure to that inside grip, and the bike flat out tells you this is good and invites you to lean even more, comfortably. The Tokul 4130 kindly informs you that you can lay it over much more than on your usual bike, even if you’re not an accomplished cornerer.

Lastly, this bike while heavy, is a wonderful technical climber.  The wide tires combine with a super maneuverable cockpit to make climbing extended rock gardens a technical snap. With a little leg strength, you can power over just about anything.

Raleigh has done a good job coming up with a components package that provides solid performance without launching the final price into the stratosphere. Of particular note are the TRP Slate 4 brakes.  They were initially a little squishy, but after a very brief break-in period, they performed exceptionally well, providing plenty of stopping power with reasonably good modulation.  They are attractive looking, with excellent fit and finish, and more importantly, top-shelf ergonomics.

The Yari didn’t feel inspiring at first; I never got that “this fork is really kicking butt” sensation. But out on the trail, when not focusing specifically on the fork, I often forgot it was even there, which means that it was doing its job and not holding me back, despite my initial reservations. Once I had the pressure and compression dialed in, it never let me down, even if it didn’t make me want to get all-out crazy.

The JD Stealth dropper post didn’t spring back up with the conviction of the most expensive dropper posts on the market, but it was also reliable and more than up to any task thrown at it. I give Raleigh big kudos for speccing any kind of dropper post at this price point. 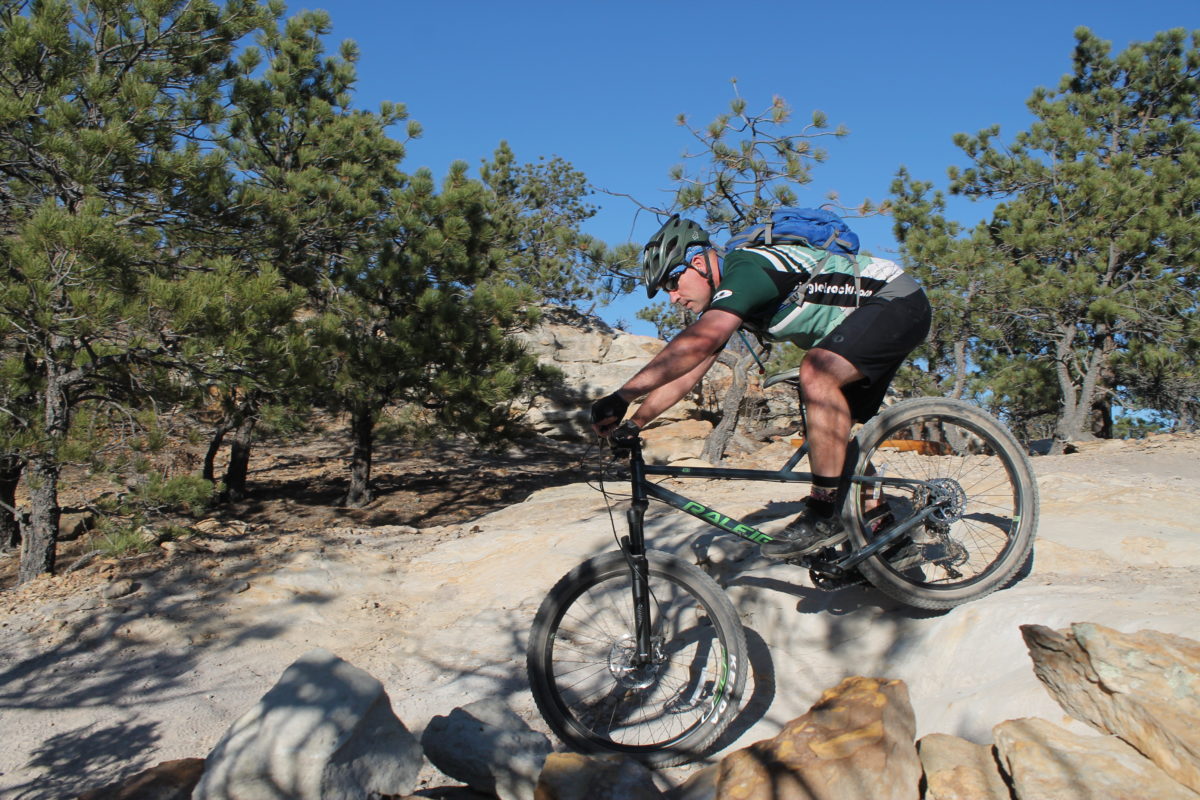 SRAM shook the mountain biking world when they introduced a midrange 1×11 drivetrain in the GX, which is what I’m currently running on my main bike.  The performance offered by GX given its price relative to XX or Shimano’s XTR made it a real winner.  That success led them to take 1×11 to an even more affordable level with the new NX. Did that value magic carry down into the new product? Alas, no. The NX on the Tokul did not shift with the crispness of more expensive offerings, but again, it was still fully up to the task and someone who hasn’t spent years spoiled by top-level components wouldn’t notice the difference.

I was initially concerned with the unimpressive looking tread of the Kenda Havoc tires, but actual time on the trail alleviated that concern.  Only when I dropped into Colorado Springs’ worst, deepest gravel did the tires seem undergunned.  For all other conditions, including ruts, roots, and even firmly packed snow, they were ideal.

The one genuine complaint I had with the spec was the house brand saddle, which was a real rump buster.  I used it for all of two rides before switching to my tried and true, trusty old spare WTB. However, that may be as much a function of the shape of my backside as it is the build of the saddle itself.

Raleigh has definitely succeeded in producing a solid and, more importantly, fun mid-fat at a midpoint price, and kudos are in order.  This bike is not going to help anyone KOM their next Strava ride, and it isn’t going to rock any enduro races, but it will provide plenty of stable, comfortable fun, and likely some rider development, especially for a novice to intermediate. If you’re looking at getting into mid-fat, or just want a bike you can use to log many miles on variable conditions without breaking the bank, the Tokul 4130 is worth a look.

Thanks to Raleigh for providing the Tokul 4130 for review. 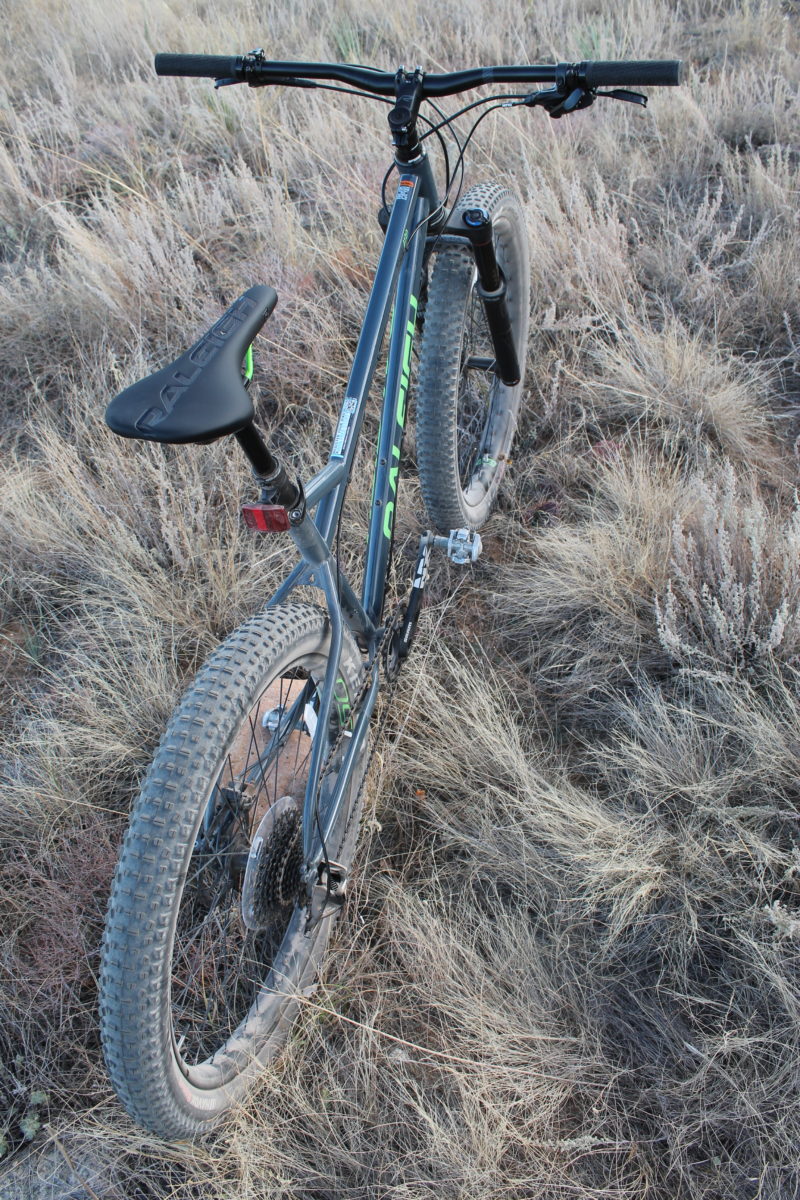