…and for the experienced mountain bike consumer, that shouldn’t come as a surprise. But for those still thrashing about on a bike that’s about to give up the ghost, who’ve become middle aged people with a decent job (prime industry targets), and for those who haven’t checked in with us since fork boots and bar ends were still a thing, mull this one over like 6 – 10,000 of your hard-earned dollars depended on it. Despite weight, materials, engineering, price tag, and every dialect of marketspeak, there is not currently nor will there ever be a do-everything-no-compromise mountain bike. 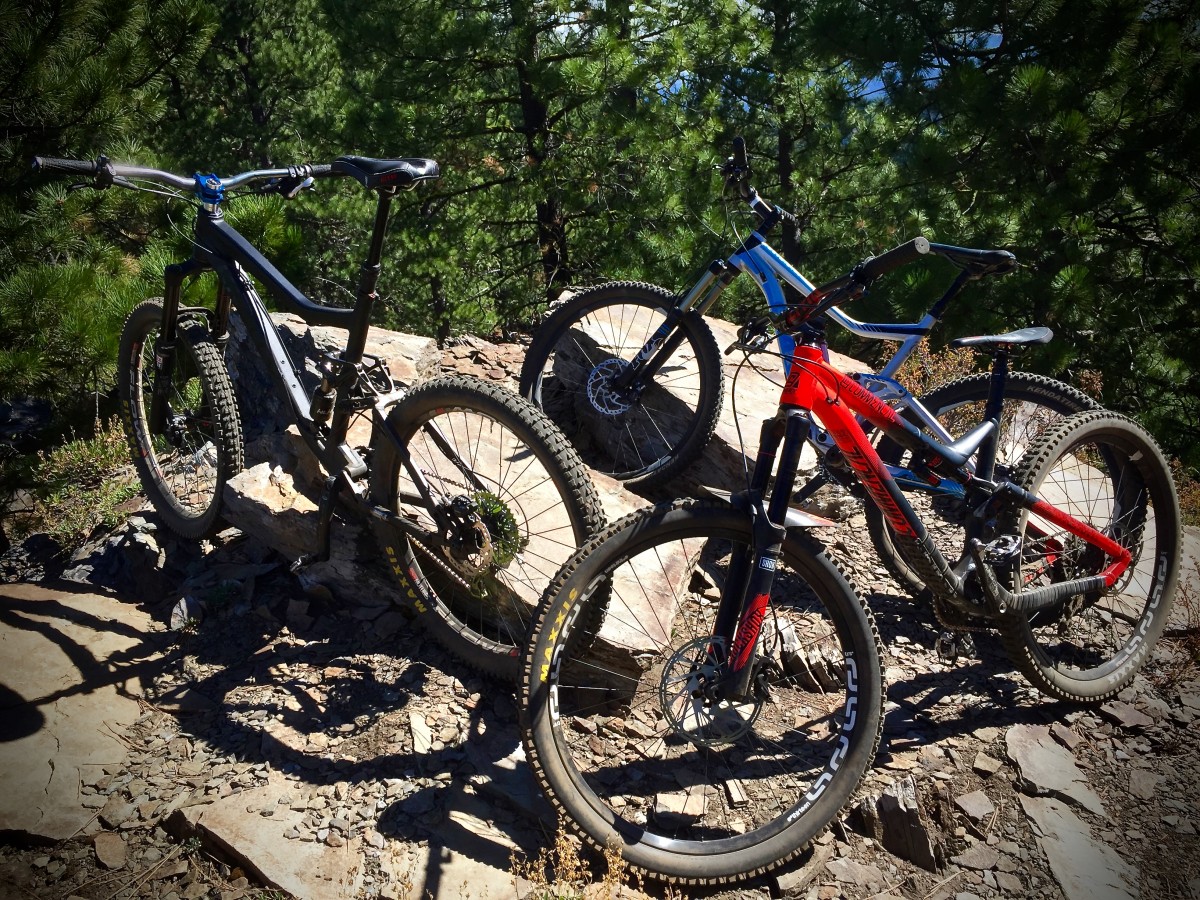 As a mountain biker, mountain bike consumer, and reviewer of things mountain bike-related, nothing grinds my gears harder than reading things like this from a bike manufacturer:

“…brings you the most efficient climbing full suspension bike on the market that won’t sacrifice anything on the descents.” (emphasis added).

Surprisingly, I’ve found very few examples from bike manufacturers officially coming out with claims as strong as the one above (although they come pretty damn close), so I’m led to believe most of the deception lies with companies like ours whose business it is to test and review products for a global readership whilst maintaining a working relationship with the companies making said products. That said, I think we do a pretty good job here at Singletracks to bring you honesty over subjectivity and fact over fiction. While I can’t speak for all of my Singletracks colleagues, I maintain there will never be a do-it-all bike, for one simple reason. 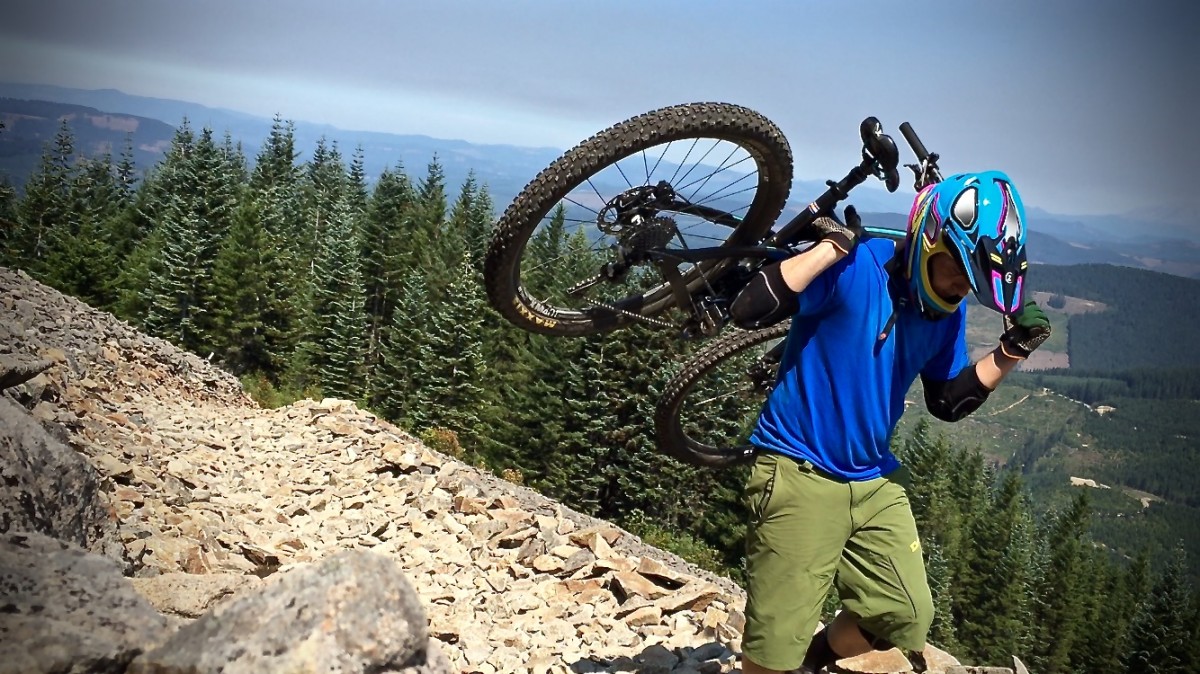 You are not physically impossible. Physics says it’s impossible. We want bottom brackets low enough to rail every corner yet not so much as graze a rock. We want chainstays so short we can manual at just the thought of doing so. We want a nimble but stable wheelbase, the slackest, flop-free head tube angle, and a shock-actuated wangdinger providing 100% anti-squat, zero bob, that’s active under braking, and free of pedal kickback and brake jack. Oh, and it all has to come under 25 pounds.

But the science of matter and motion through space and time, along with other concepts such as energy and force (a.k.a. physics) says the bottom bracket can only sit so low before it starts butting babyheads, chainstay length can only get so short before the front end starts lofting when you least need it to, and wheelbase can only get so tight before you start sketching out on a wide open, downhill bomb. There is a point where more (or less) isn’t always better and whether it’s lower, longer, slacker, higher, shorter, or steeper, compromises are made to meet the demands of the physical laws of nature.

Case in point, in an attempt to achieve lighter steering, early long travel 29ers suffered from steep head tube angles until fork offsets grew. Now, with offsets in the 50mm range, a slack 29er feels like the 26er you once loved long, long ago. Not exactly. Increasing the offset pushed out the wheelbase, reduced the trail measurement, and consequently shoved the handling issue to another area of the bike.The reason there doesn’t exist a do-all bike isn’t typically because one of these geometric features is off, but because all of the angles, lengths, and widths are connected and therefore must work in concert. While most bikes perform well enough, no bike performs in perfect harmony.

Is It Humanly Possible?

As compelled as I feel about the non-existence of the holy grail of bikes, silver bullet, or quiver-killer mountain bike, I am just as convinced about the human capability aboard these pieces of crap. Case in point, Joey Schusler raced the same 26″ wheel, 6-inch-travel full-suspension straight to the top of the podium in the 2012 Collegiate Mountain Bike National Championship, taking the men’s omnium title awarded to the individual with the highest overall score across four disciplines (cross country, downhill, dual slalom, and short track). Yet it would be a mistake to limit my argument only to professional riders when in fact you are doing it all on whatever two-wheeled heap is sitting in your garage right now.

If the bike you currently own, the bikes you drool over, and the bikes yet to come do nothing without us, it’s equally as logical that your bike’s performance is directly proportional to your own and therefore can potentially do anything and everyting with us (can being the operative word). Whatever shape, length, spec, or price bracket of your bike (or the one that costs a measily $2799), the moment you turn in your search and the mindset of the one-and-done, quiver killer bike for a quiver killer effort, the do-it-all bike may in fact exist.

I totally agree: mountain bikes are a case study in the art of design tradeoffs, given that riders expect to go both uphill and downhill.

That being said, all of my mountain bikes are do it all! Well, at least I’ve done it all with my bikes: from hauling kids in the bike trailer on paved paths to backcountry singletrack to DH park riding. Sure, my bikes aren’t optimized for all of these things but I still have a blast.

I’ve had to learn the hard (more expensive) way and will side with the ladder. A $6000 dollar bike is going to be lighter because of lighter components that do not necessarily perform better. Example, XT vs XTR brakes or shifters, etc. Then you have wheelsets which can make a big difference but a $6000 dollar bike is running nice alloy versus the $3000 bike running okay alloy both of which probably do not make a huge difference. Carbon wheels will make a diff but put the bike up around $8000 so that’s a diff argument. Then you have proprietary pedal platforms: NOT SIGNIFICANT! Can anyone actually perceive a significant difference in a DW Link vs a Maestro vs Switch vs VPP vs whatever else? Ok, you can, but can anyone actually say it gives you a significant performance gain? What this does (owning a bike with patented/proprietary part is drive the cost up with no real advantage to the buyer. Lastly there’s carbon. While being very light and sexy, not worth the extra unless you are racing XC. Great question Jeff!

Definitely agree! I’m having a hard time deciding what I want my next bike to be, as not every bikes is perfect for everything. So the question is, “what am I willing to compromise, and what performance features am I unwilling to dilute?”

It depends upon the rider, the terrain, and the style of riding. I was able to buy a bike this year that incorporates the best of XC and trail, for good uphill and downhill performance and fun. For me, and for where I ride, it’s a good do-it-all mountain bike. The price was good too: $3,000.

“There Will Never Be a Do-It-All Mountain Bike”

Which is why I will never have just one bike! 🙂

There will be, simply because we have our limitations.
Technology on bikes is basic as hell, pretty much back to horse and cart standards. we are yet to see the same tools fitted to bikes via computers sensors and little actuators to help manoeuvre as for example motor vehicles from 30years ago.

If the industry could stop doing circles with stats, and stop producing silly things like ultra wide tubes, do some thinking, collect some info, and build something modern..well, theres hope.
ATM its too obsessed with ducking every last dollar out of existing ideas. Its going to take some well funded small company to build this, we need a tesla type. Before all the smaller companies are sucked up by the money giants.

Actually, many innovations in the mtb industry have been brought forth by the smaller companies. Just look at suspension–after Specialized bought the patent to the Horst Link, the rest of the smaller players got their butts in gear and brought us VPP, ICT, DWLink, Split Infinity, etc.

One critical point is missing here. “Consumer Bike Design” is basically a “Fashion Industry”. The better a bike looks, the better it sells. Racing Bike design takes the fashion one step farther, into the land of “performance”, but still relies on branding distinction. So, No bike company will build a perfect performance bike ’cause it won’t cross-sell their consumer line. They have to make money to fund the racing side. Sure, some parts get used and researched, but the true “performance only” parts are slow to get adopted into the consumer lines ’cause they’re expensive and hard to fit into a cool looking fashion bike.

By and large, yes, the industry is somewhat “fashion” driven.

However, it’s worth noting that two of the best bikes I’ve tested this year, each a clear leader in its class in terms of performance (the RFX — all mountain and the Czar — XC race) were Turners. Turner cares not one whit for the fashion angle. Truth be told, Turners are not aesthetically appealing bikes, and that’s not just my opinion; most folks, even Turner devotees think them less than attractive.

It is not the bike, it is the motor on top that makes the difference.

My bikes have always been Do-It-All. I’ve only had one at a time. I’ve had climbing personal best’s on my heaviest bikes (Felt Redemption III, 38 lb). Fastest round trip with big climbing and descending, from home to top of Black Mountain and back, 30 mi, 4000 ft ascent (4000 ft descent, too 🙂 on my worst suspended bike (Mongoose XR1100, 39 lb, $75 Walmart clearance deal). Some of my most fun rides on a mash-up of leftover parts assembled onto an “all-mountain” 5 inch travel single pivot frame—no custom, proprietary, patented, optimized, tuned suspension. The only bikes better than what I have had my most enjoyable times on are, perhaps, the ones in my imagination as I lust after the latest and greatest as written about in their reviews–but, none of them can do-it-all.

A fast racing XC bike will never be good in the snow like a fat bike, and a rigid no suspension bike will never be able to do DH competition runs. That is OK. There is nothing wrong with having more than 1 bike for different capabilities.

I have 2 bikes (29er XC Ultra-endurance bike & a 26er 120mm travel Trail bike) right now. I am now also looking for a fat bike for winter riding. I do not expect any bike to do everything perfectly.