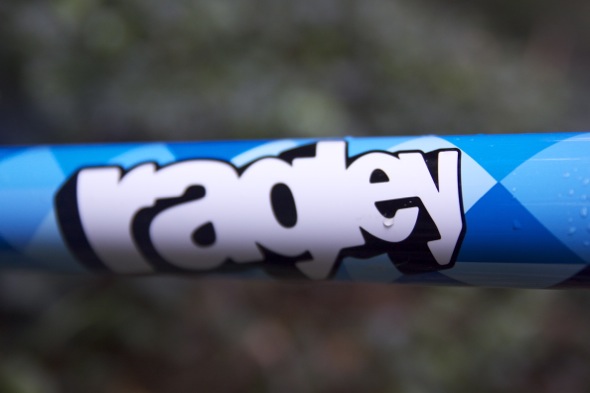 Ragley is a small company out of the UK specializing in aggressive hardtails–something we need more of on this side of the pond. The company make bikes for applications ranging from trail riding to all-mountain hucking, in both 4130 steel and 7005 aluminum. Their bikes are available in 26in- and 29in-wheeled versions, and all at very reasonable price points. In addition, they make some slick-looking cockpit components that seem ready to take a pounding. 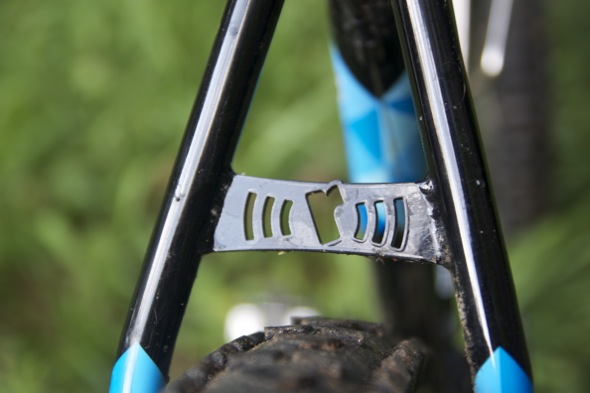 Ragley sent over a 2013 Blue Pig frame in black for us to build up and try out–and man is it purdy, with its gentle curves and checked, blue accent paint. The Blue Pig falls at the aggressive end of the Ragley spectrum, with a 66.5° headtube angle and a recommended fork travel of 130-160mm, depending on your headset choice (internal vs. external). This year’s model has been updated with a steeper, pedal-friendly seat tube and a lower bottom bracket (measured at 12.5in after build). The Taiwanese-built frame is made of triple-butted, heat-treated 4130 Chromoly steel and doesn’t look like anything else on the market. Our 20in test frame (the largest they make) weighed in at 6.25lbs.

It’s immediately obvious this piggy wants to squeal. Gussets adorn both down and top tubes at the headtube junction. One bottle mount is located on the downtube, freeing up the entire seat tube for slamming your post before you hit the gnar. As is standard for a bike with this intended application, the Blue Pig comes with ISCG-05 chainguide tabs, though I built it up with a 2×10 drivetrain without a chainguide. 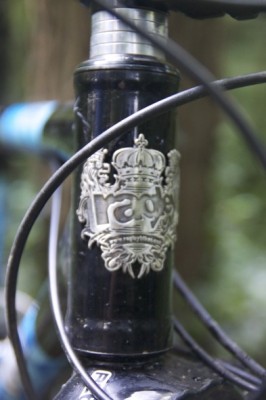 The headtube is 44mm, which gives you several options to choose from in the steerer tube, fork length, and headset departments. I planned to run my old-but-recently-rebuilt Marzocchi Z1 Light, so I chose a headset that would accommodate the 1-1/8 inch steerer tube and allow for 150mm of travel. 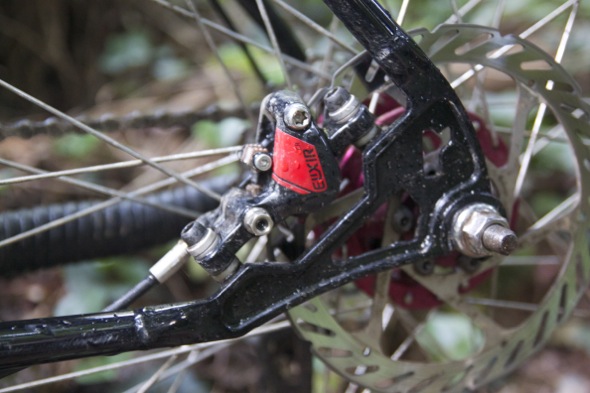 The rear end of this bike is a true work of industrial art. The seatstays are svelte and curve down toward the rear axle. Tire clearance is maximized at 2.5in by the Three Finger Chainstay Bridge – a sort of buttressed plate that still allows for a 36t middle ring. The post-mount rear brake mount is tucked away above the chainstay on a beautiful dropout plate, providing a maximum rotor size of 180mm. 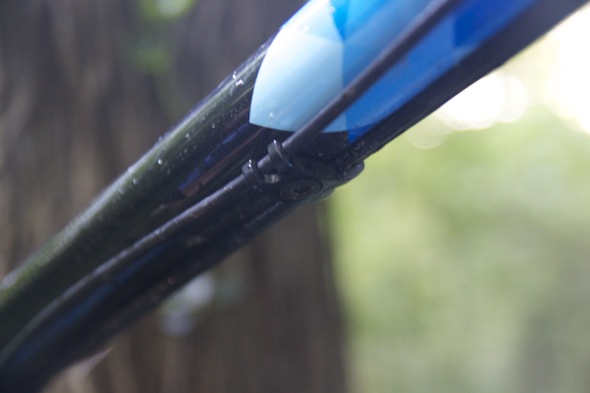 Cables are guided cleanly underneath the top tube via three bolt-on guides that have enough room for all the shifty bits you could want, including a dropper post. From there, zip-tie mounts guide everything down the chainstays. As an added bonus, the cable guide bolts are the same width and pitch as cleat bolts, which could come in handy in a pinch. The bolt-on guides, though a tad finicky, work well and look sharp. The rear brake is guided down the downtube and chainstay with zip-tie mounts. 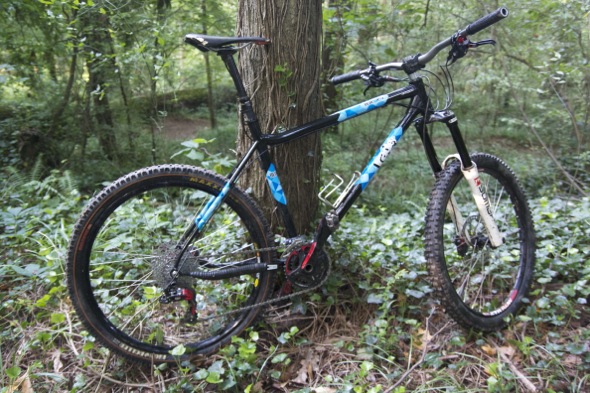 The build-up went relatively smoothly with only minor gripes. On our test frame, standard-size zip ties would just barely fit through the mounts, but only after a bit of tugging–perhaps due to a thick paint job? The bottom bracket threads were a little rough, but I was able to install the BB without having to chase the threads (stop wagging your finger, you uppity mechanic). These are both very minor issues, and can be expected in such an affordable frame.

Here’s my complete spec list for my Blue Pig build:

Thanks to Ragley for providing the Blue Pig for review.

Gear
7 Mountain Bike Tools That Pay for Themselves in the...
Community
Mountain Bike Trends: Past, Present, and Future?
Progression
How to Go from Clipless to Flat Pedals for Mountain...
Gear
8 Waterproof Trail Jackets for Winter and Spring
Subscribe
Login
Please login to comment
11 Comments
Most Voted
Newest Oldest
Inline Feedbacks
View all comments

Great looking bike. I really like the idea of a Trail/AM hardtail, though the 26″ wheels don’t really do it for me. Can’t wait to hear how it rides–I’m sure Nico was able to get pretty rad with it.

Yeah, if it was me I’d definitely go with a 29er… but this looks like a pretty cool rig! Looking forward to the complete review!

Agressive hardtails with a bunch of travel, slack head angles, and chain guides makes no sense…but that’s a sweet looking frame! Some serious attention to details!

Thanks for the write up. I’ve been researching 29er HT’s like the Honzo, Yelli Screamy, Nimble 9, Paradox, etc. This geometry speaks to me for some reason.

@jtorlando25 — curious why you think agressive hardtails make no sense.

I’m just not sure I understand the intended use…it has the geometry and features of a “park” bike minus rear suspension. The head tube is only so slack to make up for the monster travel fork…if you go any steeper with the head angle and bottom out a 150mm fork, you’ll likely go OTB. “Aggressive riding” to me is drops, roots, rocks, DH (and maybe even enduro) type trails. If you ride an “aggressive hardtail” on these types of trails regularly and you ride it hard, you’ll be murdering rear wheels and your body would take a beating. If you want to ride it on less “aggressive” trails…an xc oriented or “trail” bike would be better suited for you. Considering we live in a world of mass produced fat bikes, fixies, and cyclo-cross bikes…my argument is null and void 😛

I’m with JT. The bike strikes me as suffering an identity crisis. 130-160mm travel up front on a hardtail? It would be like trying to sit on a penny farthing backwards under compression.

schwim what! we never agree on things! 😛 lol. The backwards penny farthing is a perfect comparison.

I totally get it. It’s a bike you can get rowdy on without all the weight, complexity, and cost of a DS rig. People jump hardtails all the time (heard of BMX?), its just MTBer that seem to think they need 6″ of travel to ride off 2ft drops. It’s not for everyone, but I see the appeal.

This style bike is popular in the UK, On-One makes several like it too.

Yes, I’ve heard of BMX. They use rigid bikes. A fantastic idea for downhill, IMHO.

Hardtails, on average, cost less than a Full Squish bike. Maybe aggressive hardtails are like the poor man’s All Mountain bike?

Most of the bikes that fall in this category that I have been checking out are 29ers and more in the 120mm range with some being able to accomodate up to 140mm.

I have never owned a 29er, so that is something I am interested in checking out. I do like to jump, and hop, an flick my bike around. Most 29ers I have ridden (which isn’t a lot) seemed to struggle in this area.

I wouldn’t describe myself as an AGRESSIVE rider. And my DOWNHILL is not world cup stuff, it’s just short local runs or some mountain rides here and there.

Some of these bikes, such as the Nimble 9, come out of the box with the ability to run geared or singlespeed. SS is something I’d like to play around with as well.

I ride a Santa Cruz Nickel and it’s a hell of a lot of fun, but to be honest I don’t really NEED it for most trails I ride. I like the versatility that these types of bikes seem to offer.

I guess my point is that it comes down to personal preference — and these bikes just sound fun to me. And FUN is why I ride.