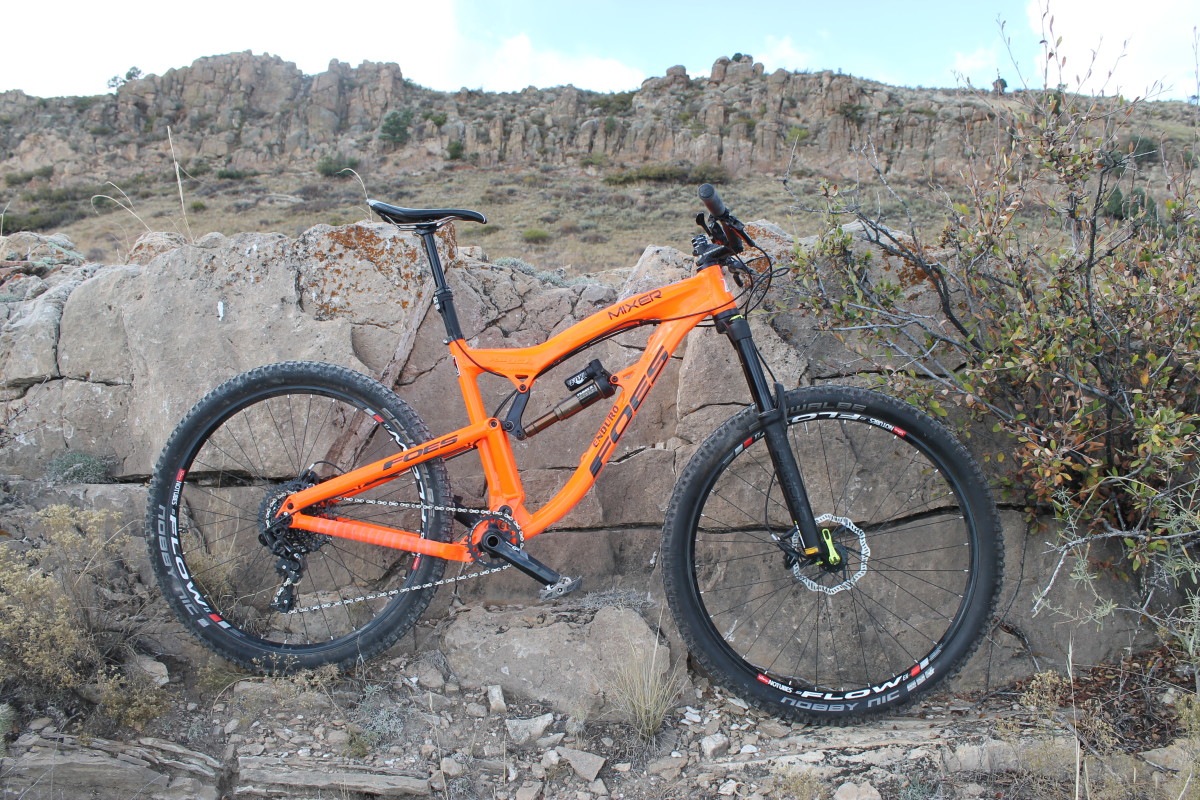 At the 1996 US Junior Downhill Skiing Championships, a then largely-unknown 18-year-old Bode Miller announced his presence by winning three of four events, and placing second in the other.  What was most significant about this event other than the arrival of a great talent?  His equipment.  His weapon of choice?  A “shaped” ski, in this case the K2 Four, which sported a much deeper sidecut to add to the ease of turning.

Until that time, shaped skis were a small niche market to most consumers. Especially racers, who perceived them as nothing more than a gimmick to make things easier for noobs, shied away from. Until that day when a young renegade Bode mounted up and took the skiing establishment by storm on a new design. 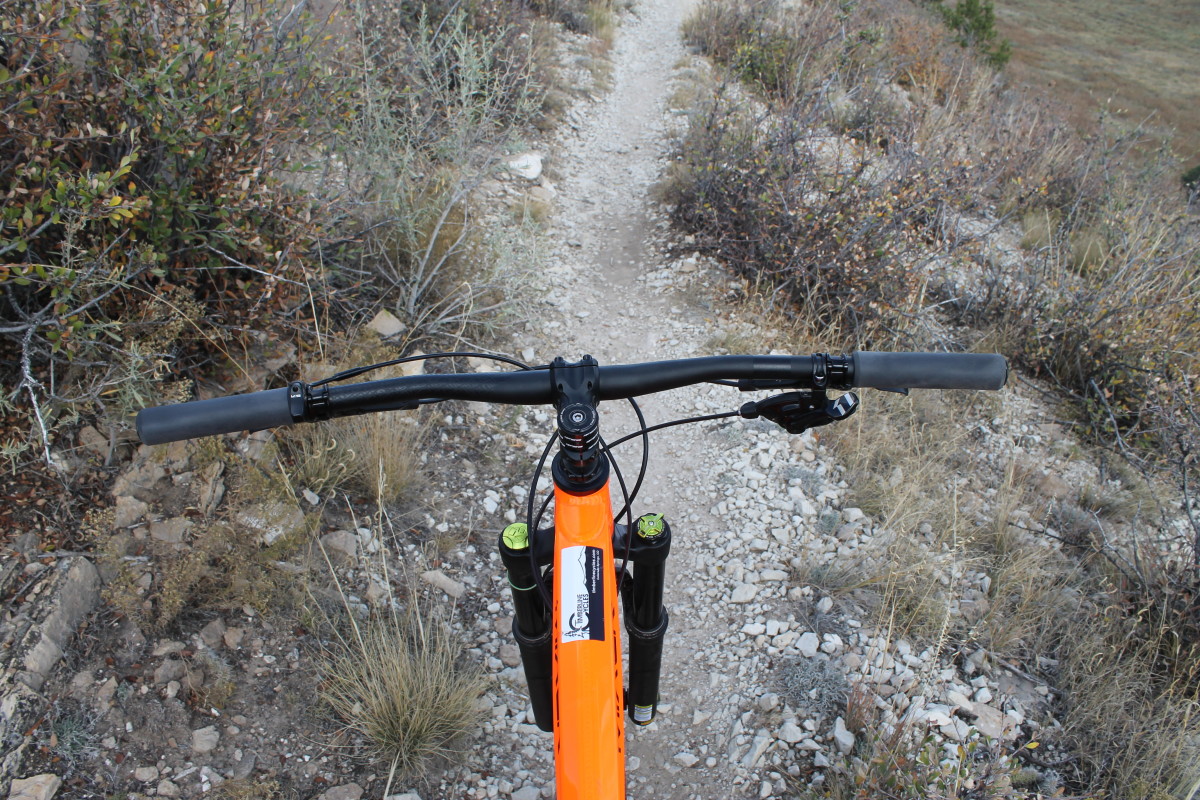 Little-known Tucker Kennedy arrived at the 2015 Colorado Downhill State Championships on a new design: The Foes Mixer Enduro.  The result? First place in one of the two most competitive junior downhill races in the country.  To be fair, Tucker is a skilled and accomplished rider, but finding the top of the podium at such a major event was something new.  The crazy-new mixed wheel bike was his partner for his ascendance to the pinnacle of his division. 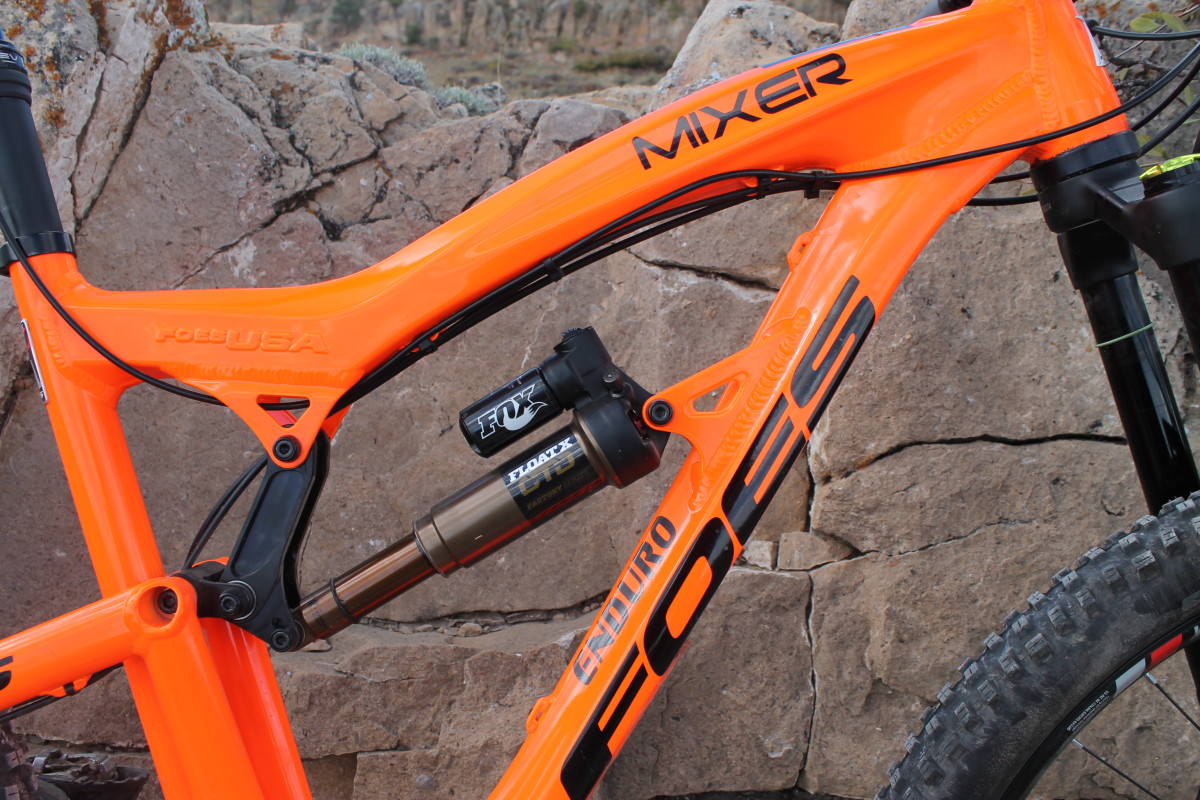 The uniqueness of the Mixer comes from the mix of wheel sizes:  29″ up front and 27.5″ in the rear.  Mixed wheel bikes are nothing new, and even as recently as the 29er wave, numerous manufacturers from garage boutique welders to the giant Trek were making 69ers with a 29″ up front and a 26″ in the rear, in hopes of getting the best of both worlds in one bike.  However, either due to legitimate performance concerns or just plain old consumer reluctance to try something nonstandard, the concept never took root and seemed dead.  However, in his relentless pursuit of performance, MIke Vidovich of Timberline Cycles had been experimenting with almost every possible combination of wheel widths and diameters.  After finding what he believed to be performance that truly exploited the best of both worlds rather than compromising them, he approached Brent Foes with the idea of creating the perfect frame to take advantage of the 29/27.5 mix and fully realize its potential. 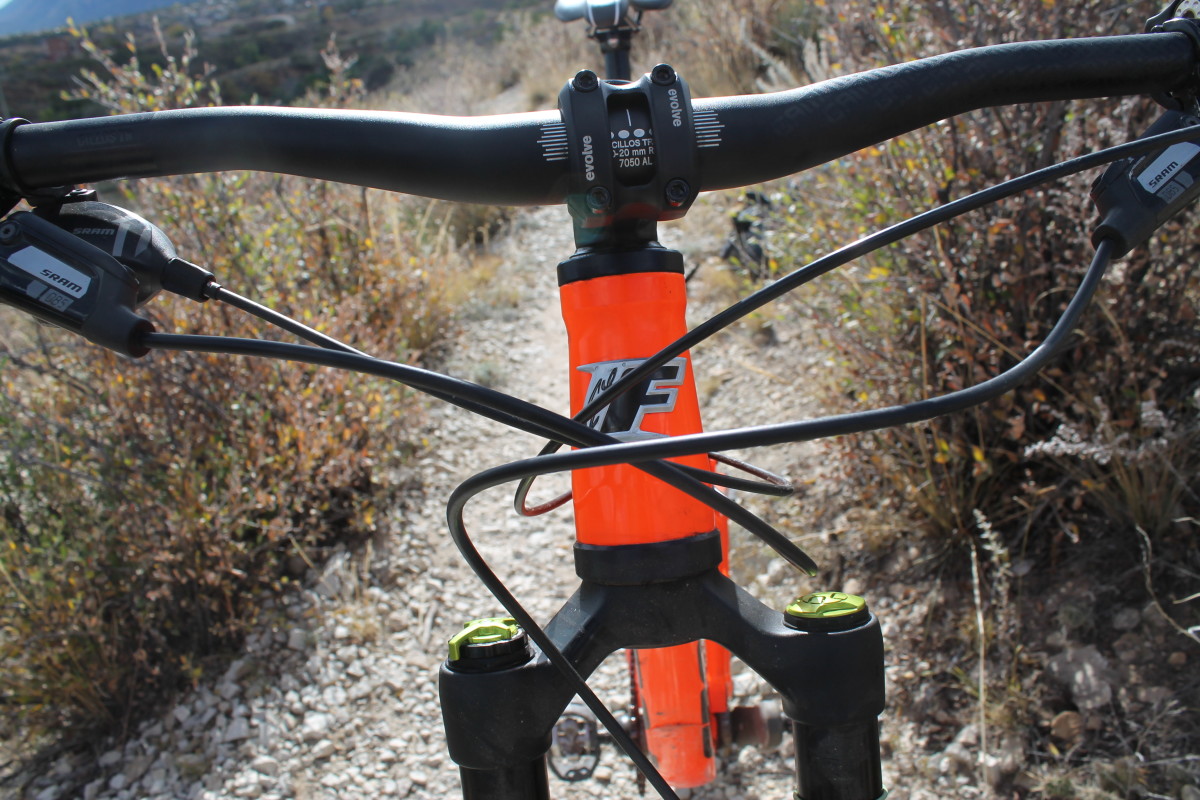 When I got the offer to be one of the first to write a full review of the Mixer, I was more than a little excited. I was, like most would be, skeptical of the mixed wheel concept, but I try to keep an open mind and I rarely turn down an opportunity to try something new.  I was very curious to see if the reality would be anywhere near the claims presented.  Of course, the fact that Tucker had just taken first in Colorado went a long way to ease my pre-ride concerns.  What made this even more interesting is that the Mixer Enduro is a 6″ travel enduro rig, not a downhill rig, even raced with a single crown fork, and yet it had found the top of the podium in a downhill race.  Either this bike had an incredible performance range, it was miscategorized, or there was some kind of a fluke here.  I anxiously awaited my opportunity to find out. 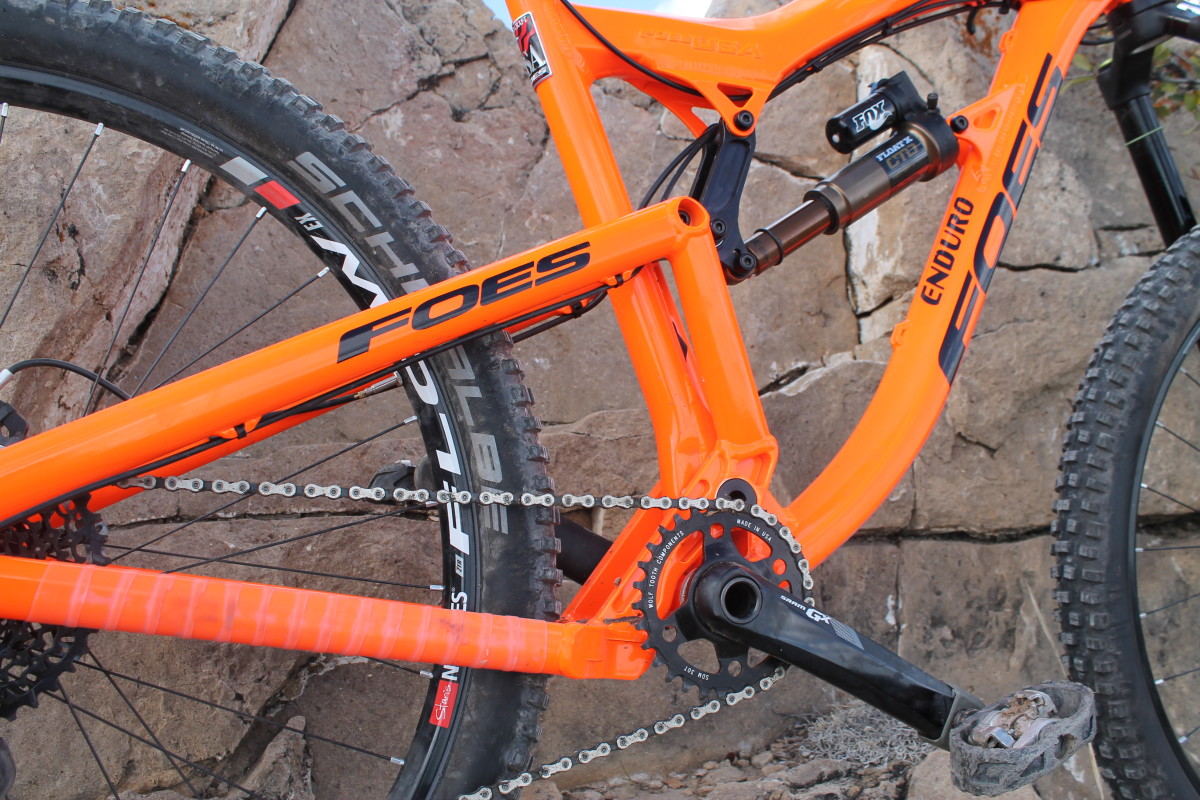 The Foes Mixer Enduro by the Numbers

The Mixer frame is fabricated in the USA by Foes from hydroformed aluminum. So what we have here is a mixed wheel bike with a 29″ front wheel and a 27.5″ rear wheel mated to a frame with 160mm of rear travel (adjustable to 170mm), optimized for a 160mm fork.  The standard Mixer Enduro head angle is right in the middle of enduro-land at 66.5 degrees, although Mike has tweaked it as much as a full  degree in either direction.

Bear in mind that enduro bikes are generally built as pure 27.5ers and larger wheels usually require steeper angles, so theoretically 66 degrees on a Mixer should ride slightly slacker than it would on a standard enduro bike. Similarly, the 13.65″ bottom bracket height is close, but a little on the high side compared to most enduro bikes–but again, that location is no doubt influenced by a little extra rise from the large front wheel. 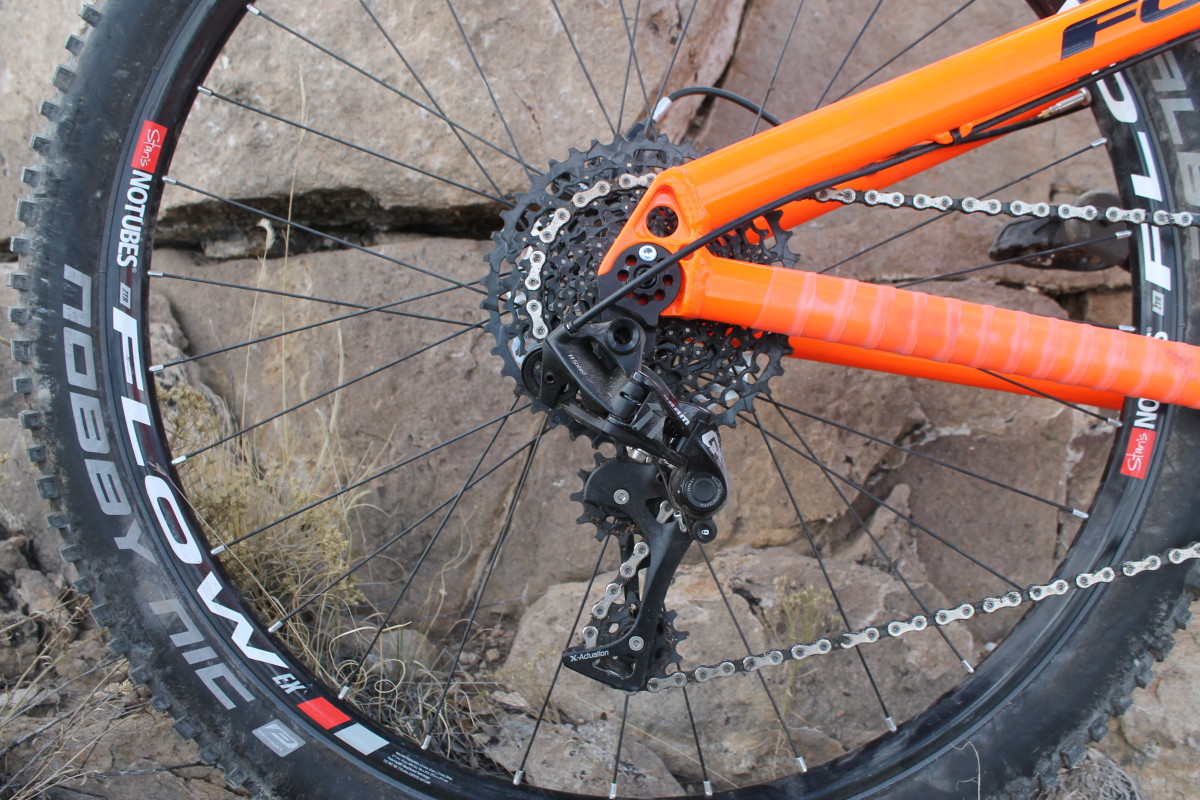 But in looking at the bike and the numbers, it becomes obvious that the significant differences generated by the mixed wheel design render a simple look at the numbers next to meaningless. The only way to make any kind of meaningful assessment of this bike would be to spend some time on it: maybe more time than usual, should the uniqueness of the design end up requiring extra adjustment time. 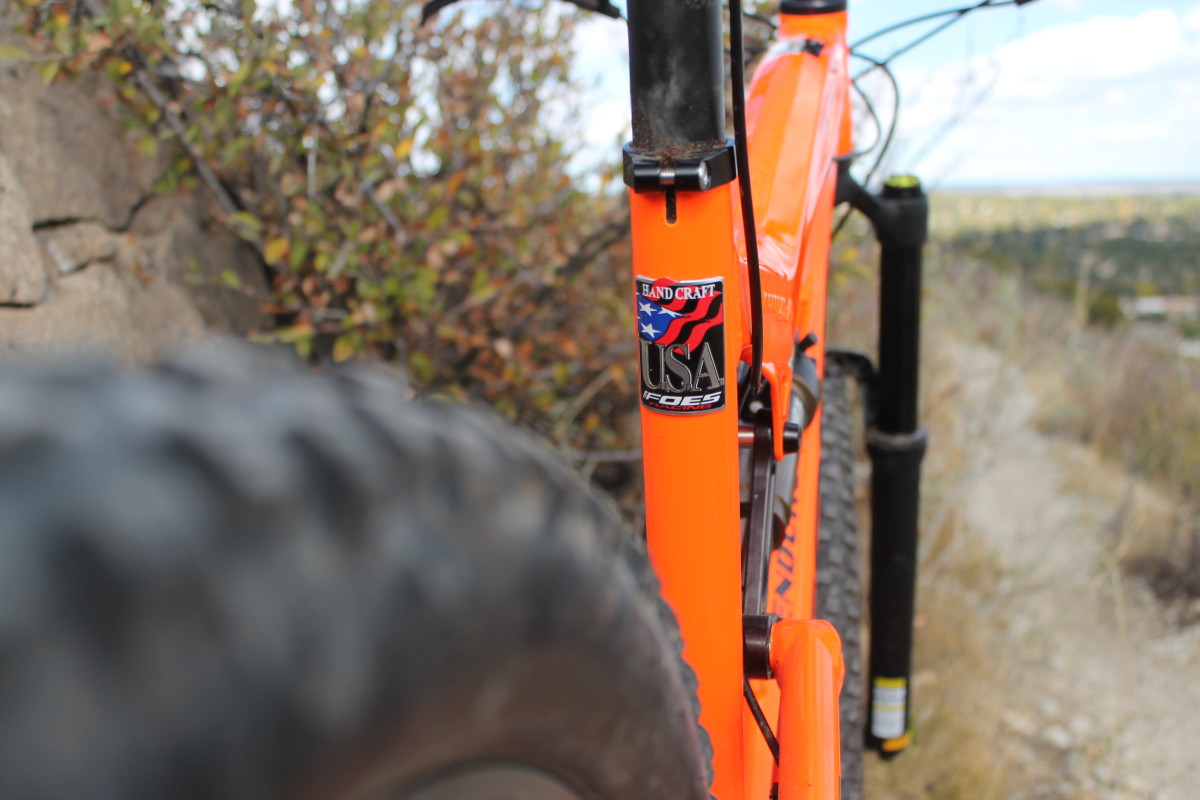 While Timberline will build a bike to any spec, they specialize in custom mixing of quality but reasonable-cost parts to bring high end bikes into a competitive price range.  The standard Timberline build for the Mixer enduro comes with a Fox Float X CTD shock, a RockShox Pike RC 160 fork, a Stan’s wheelset (customer choice of Flow or Arch), SRAM’s GX 1×11 drivetrain, SRAM DB-5 brakes, Schwalbe Nobby Nic 2.35 tires, and quality aluminum controls.  The Timberline build without dropper post or pedals tips the scales at 29.5lbs–not a featherweight, but not out of line with other bikes in the category.  It also taps the bank account at a somewhat-lower level than comparable bikes, at $3,995 MSRP. 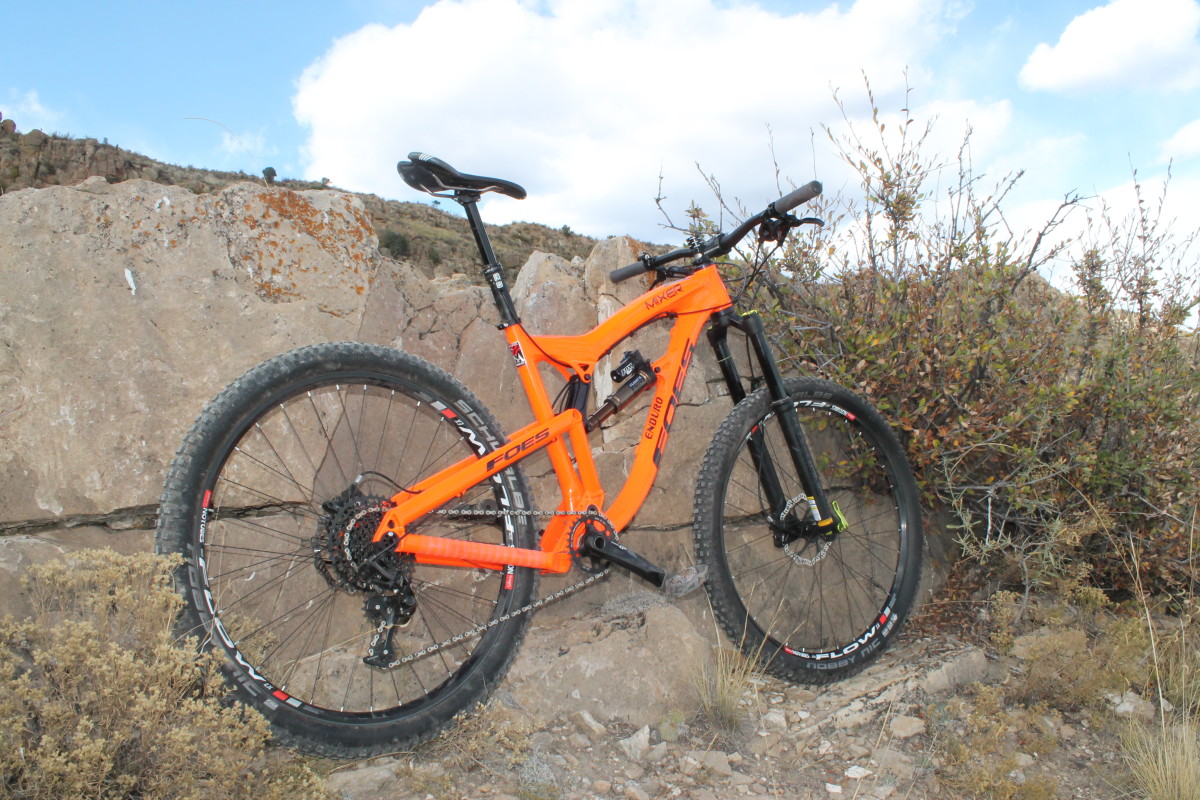 So as I approach the testing period, I have a number of questions. Most obvious among them is: how will the mixed wheel design perform?  Is it truly the best of both worlds, is it a compromise, or is it even less than the sum of its parts? What about that geometry: will that shortish wheelbase reduce stability and will that higher bottom bracket hurt cornering?  Will all that aluminum be no fun now that I’ve grown accustomed to carbon.

Actually, the list of questions is quite long.  Finding answers should be interesting.  I actually have very high hopes, given the bike’s performance on the race course. So will it be a gimmick or a game changer? Stay tuned for the full review, coming soon!

I would love to take this rig for a spin!

Like the author suggested, the numbers don’t tell the whole story because they aren’t compared against a like reference point. You just gotta ride it. I did, and I can’t wait to get mine. Looking forward to his next review after he tries it

Hey Jerry,
We are fans of German engineering too.
However, Litevilles take on this and “goes much further” is that wheel sizes are based on a person height :
small = 24/26 wheels med = 26/275 whees large = 275/29 with no change in wheel size to geometry (FOES CAP GEO) into account , Hmmm . At this point these smaller wheel sizes and lack of tire support for small to med size high performance riders would put many of us at a disadvantage against the 275/29 wheel configuration. Foes design, research and race testing had brought us to our conclusion and the 1st production design of the 275/29 geometry . Yes lots of folks have tried before, too small wheels, too different of wheels, coupled with suspension and geometry choices they made. But just like goldilocks and the 3 bears, one too hot, one too cold and one just right… Foes will be releasing its small and xl sizes soon which will allow all riders to ride this wheel configuration and have a nipple / snappy 275 handling bike that also carries all the great speed and roll of a 29er. In addition, with unparalleled anti-tipping (over-bars) resistance . We hope you get a chance to try one one day.
Thanks for taking the time to comment and feel free to contact us anytime for more info.
Its not just are opinion its our experience .
Mike V.
Timberline Cycles