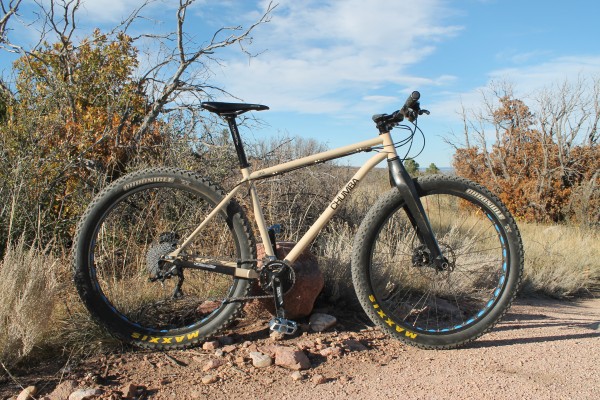 I purchased my first mountain bike in 2000, by which time aluminum had largely displaced steel as the frame material of choice (which has since been displaced by carbon fiber), and front suspension had fully taken over the market, soon to be supplemented with full suspension. So now, a full 14 years later, with all the advances in bicycle technology, I was a little befuddled when offered the opportunity to review a fully rigid, steel-framed mountain bike. While I’m something of a gear freak, I’m not really a technology snob, and decided to look into the Chumba Ursa now dangling before me like a carrot. But would it be a sweet carrot, or one of those bitter, harsh, dirty-tasting carrots? After checking out Chumba’s web site, I decided I was intrigued and agreed to put this rigid, steel beast through its paces.

While the Ursa is retro in its material and suspension choices, this definitely isn’t your father’s fully rigid, steel bike. First and foremost, and what intrigued me to begin with, is the fact that the Ursa is a 29+, which means it’s a 29er, but with fatter tires–in this case a full 3.0″. Do we really need yet another segment in the already exploded mountain bike market? A few years ago, there were just narrow, 26″ tires. Then came 29ers, then 27.5, then fat bikes with 4″ and 5″ tires on 26″ wheels. Don’t we just about have it covered yet? But then again, options are usually good, especially for a gear freak like myself, and I had heard rave reviews about some 29+ers from the few who had ridden, or even purchased, one. I was curious to find out if this unusual hybrid of big and fat (wheels and tires) mated to an old school frameset would be a brilliant melding of styles, a complete waste of material, or something in between.

While even many American boutique manufacturers have outsourced their frames to overseas factories, Chumba takes pride in the fact that all their frames are made in America out of American 4130 chromoly steel. The first run was produced in Portland, OR at ZEN bike fab, owned and operated by one of the original CHUMBA frame builders. Since then, Chumba has completed their in-house production studio collocated with their new headquarters in Austin, TX, and all Ursas are built from the ground up in that facility. 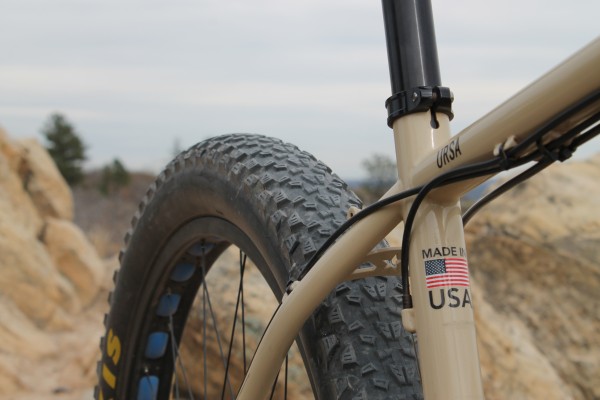 While the Ursa employs a steel frame, making one think “old school” or “simplicity,” it contains some thoughtful extras which add to the Ursa’s versatility.  The frame includes an ISCG mount, a headtube which can accept standard 1 1/8″ or tapered forks, and sliding dropouts so you can buy just one frame and run it geared or single speed.  There are water bottle mounts on both the seat tube and the down tube.  There are also rack mounts on the seatstays, further adding to the Ursa’s versatility as a bikepacking rig (although for that application, the Krampus fork makes for the best choice since it also has rack mounts). The Ursa even has routing for a dropper post.  A lot of quality attention to detail has gone into the Ursa.

Those are the practical and thoughtful elements of the Ursa frame.  The Ursa also has a number of aesthetic details which enhance the beauty and uniqueness of the frame.  First is the light tan paint job, which is a perfect match for the frame and the final product is gorgeous in an understated way.  In this age of svelte, sexy, carbon frames, the Ursa stands out without showing off.  The frame includes a couple of clever cutouts, like the Texas lone star on a brace between the upper seatstays and the company name on a brace between the non drive side lower seatstay and chainstay.

Standard configuration for the Ursa includes Surly’s Krampus rigid steel fork, which can be upgraded to the  Whisky 9 carbon fork in simple black matte.  The Whisky includes a tapered head tube and  internal cable routing for the front brake.  I was stoked to see the test bike Chumba sent me included the Whisky fork, which is a sight to behold.

Like the very concept of a 29+, the Ursa’s geometry seems a bit unusual. To begin with, the geometry seems to be a bit slacker than one would expect for a hardtail 29er. In addition, the top tube and chainstays run significantly longer than other bikes in this class. The rationale is that the Ursa is designed to be a long haul bike, ready to take on epic adventures in endless backcountry terrain, and a comfortable layout would benefit the rider in these circumstances. On paper, this would seem to hinder maneuverability and versatility. But just as we don’t crown a Super Bowl champion based on what’s on paper, we don’t assess a bike by what’s on paper, but rather how it performs in the real world. I looked forward to hitting the trail with the Ursa to see just how it would shake out. 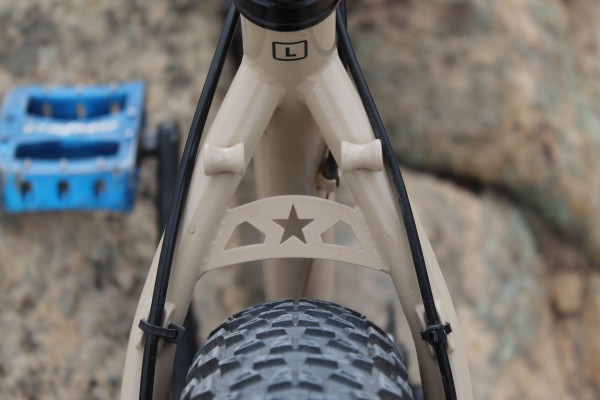 Chumba spec’d the Ursa with a mostly-standard Shimano XT parts kit for long-term, reliable service. Aside from the standard lineup of XT components, the Ursa comes with Surly Rabbit Hole rims mated to 150mm Hope X2 EVO hubs with DT Swiss Spokes and Maxles (15mm up front and 12mm in the rear). Upon introduction the Ursa came with Surly Knard 29×3 tires, but mine was delivered with the new Maxxis Chronicles. Controls include a wide Thompson handlebar and short Thompson stem, and the drivetrain is powered by a Race Face Respond 2X crankset. All in all, the parts kit seems to be right in line with Chumba’s vision for the Ursa–maxing out the performance category without showing off obvious bling.

If you recall your basic constellations, Ursa Major and Ursa minor, you may also recall that “ursa” is latin for bear. Now likening something to a bear may be positive or negative, depending on culture and context. Over the course of several weeks, I would have the opportunity to find out which, if any, bear-like characteristics the Chumba Ursa would display. Stay tuned for the final ride report, I have no doubt it will be interesting one way or the other! 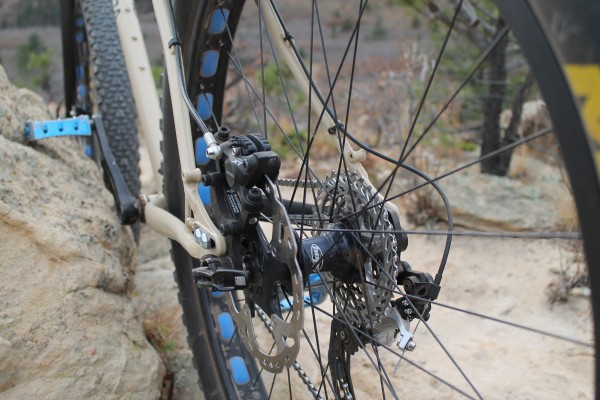 It’s a nice looking bike, like that it’s made in the US even if it is Texas. ????Be hard to top my Krampus though. Looking forward to the review.