Now that I’ve had a few months to give the Niner JET 9 Carbon a proper flogging, it’s time to come back to you and report on my experience. For those that want a more in-depth look at the specs and geometry, be sure to check out my On Review article from December. 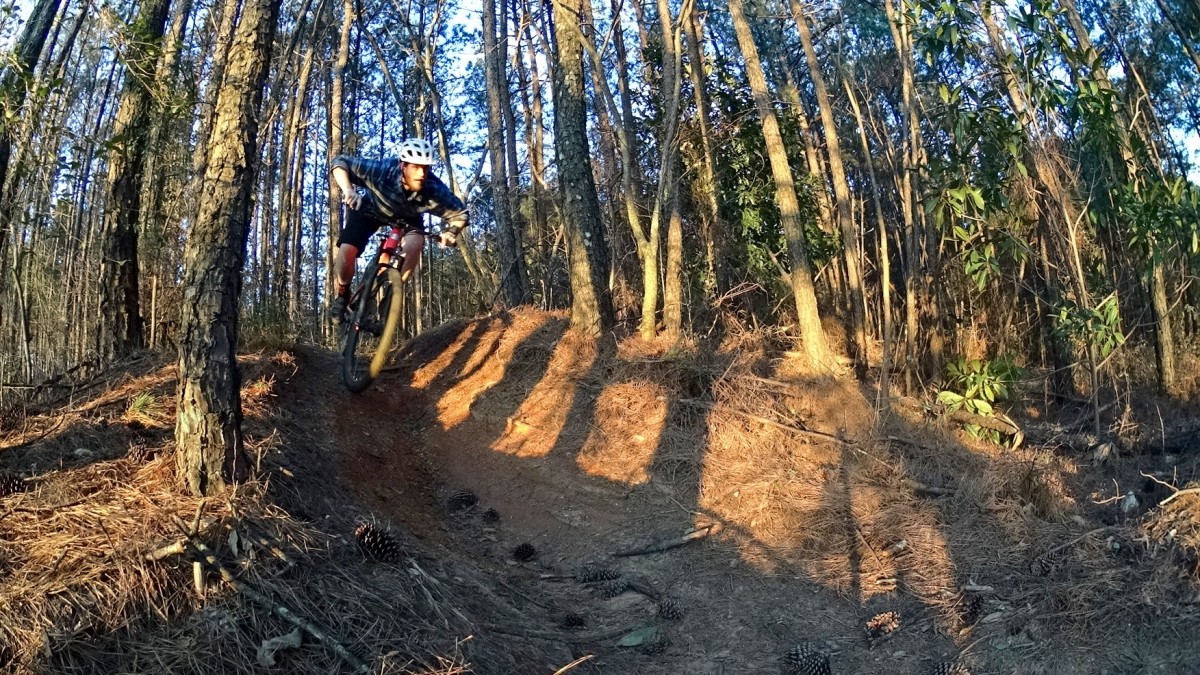 A quick synopsis to get everyone up to speed: 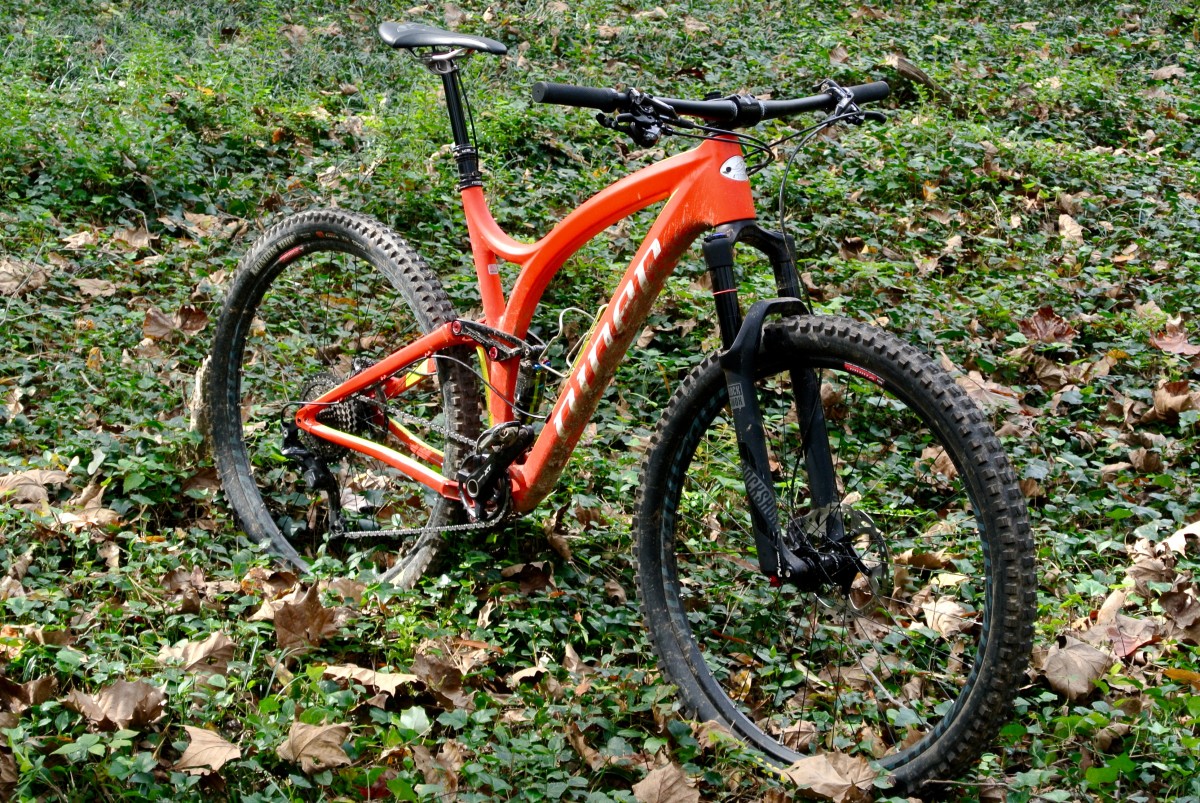 The geometry runs counter to the current long, low, and slack trend, skewing short, high, and steep. But as I mentioned in my On Review article, Niner seems to have found a formula that works for them. Key numbers include:

All of the Niner-branded components were excellent. The saddle was comfortable, the bars were properly wide at 780mm, and the wheels proved to be fairly stout. The rear wheel did require some truing partway through the test. I also swapped out the 70mm Niner stem for a 50mm Thomson stem, but that was a personal choice. Overall, the build kit is solid.

Niner went with Shimano’s new 11-speed XT group for their 3-Star build. XT has always been the workhorse in the Shimano line, and you can find it on a wide variety of bikes from XC to all-mountain. It’s a solid choice, but my time on the Niner revealed a few quirks.

Shifts were quick, but the lever feel was overly firm. I tried adjusting the spring tension on the derailleur, which helped some, but didn’t alleviate the firmness entirely–even at the lowest tension. I’ve ridden the new XT group on other bikes with much lighter lever feel, so some of it may be due to the cable routing on the Niner. Lever ergonomics, however, are excellent.

If I backpedaled with the chain on the largest 42T cog on the cassette, the chain would drop down the cassette. This was the most annoying quirk of the group. Friends and other reviewers have reported the same issue, so it wasn’t just an isolated incident with the Niner. Can’t think of a scenario where this would happen? I’ve got one. You’re climbing something really steep and then have to get off and hike. You hop back on, clip one foot in, and backpedal to get your foot in the right spot in preparation to ride. The chain drops down the cassette, and now you have to get back off your bike to fix the chain.

And finally on the topic of XT, I experienced inconsistent lever feel with the brakes. They never lacked for sheer power, but the bite point could vary greatly day-to-day or throughout the ride. Sometimes it took very little lever pull for the pads to engage–which is my personal preference–and at other times, the lever would get awfully close to the bar before braking commenced.

The only other component I had an issue with was the KS Dropzone R post. It was easy enough to get setup thanks to the clear instructions, and operation was silky smooth. While it was operating, that is. In my experience with the Dropzone, it hated getting the least bit dirty or wet–not ideal for mountain biking. The smallest bit of moisture or grime would wreak havoc on the post, causing it to either not drop, or at other times, drop nonstop. A full-length line of housing runs from the remote to the top of the post, so I’m not sure what else could be done to keep it clean. I found that having a dropper that doesn’t work properly is more frustrating than not having one at all.

If you saw my review of the alloy version of this bike, you know how impressed I was with Niner’s CVA rear suspension design. As before, I found running sag around 30% worked best for my trails and riding style. Maybe the long chain stays help out in this regard, but it’s hard to overwhelm the rear of this bike. It pedals well, it climbs well, and can mow through chunky descents better than other 100mm-travel bikes.

I did have to tinker more with the RockShox Pike to get it feeling how I wanted. It comes from the factory with four “Bottomless Tokens” (volume spacers) installed. The more tokens installed, the more progressive the spring rate, i.e., the harder it will be to bottom out the fork. Generally speaking, bigger or more aggressive riders will run more tokens compared to their lighter counterparts. With four tokens installed, I could not get full travel without dropping the air pressure to silly-low levels. I tried three tokens as well before deciding two worked best for me. There was still plenty of ramp up at the end of the fork’s stroke with just two installed, and small bump compliance was greatly improved.

As it usually does, the tinkering paid off and the bike felt much more balanced with supple suspension at each end.

In a word: stout. With the huge carbon tubes of the front triangle and pivot-less aluminum swing arm, the bike goes where you point it. The Pike is already known as a solid fork, and the Boost-spaced model spec’d on this bike probably adds to the sure-footedness of this package. Niner spec’d its own wheels on this bike with 23.5mm (internal) rims–narrow by today’s standards. Even so, I never felt the wheels were holding me back.

After I swapped out the stock Ikons for more capable tires, the bike stepped it up another notch in the handling department. With some Minion DHFs mounted up front and rear, I was left wondering if I actually needed more bike than this. The drawback to those tires was the weight: climbing was noticeably slower with the Minions. I ended up splitting the difference and went with Maxxis’s Beaver tire in a 2.25″ width. Pro tip: don’t bother with the Beaver in the 2.00″ width; it’s too narrow and has very little volume for real trail riding. But the 2.25″ Beaver is a sleeper! It’s great for winter riding in mixed conditions.

As stated above, Niner is far from the bleeding edge of bike geometry, with them taking a more traditional, conservative approach. But, as we all know, geometry charts don’t paint a complete picture–if they did, we wouldn’t need to test bikes. At times, the JET 9 did feel tall, a trait which required more body english to stay on line while pedaling through rock gardens. However, once the seat is dropped, that feeling disappears. With its longish chain stays, the JET 9 does take more effort to bunny hop, but they also give the bike a planted feel at speed. It may not have the lowest bottom bracket, the longest top tube, or the slackest head tube angle, but the damn thing works as it is.

With the latest updates to the Niner JET 9, namely the 120mm fork, it has taken a full step towards trail bike territory and away from its XC roots. If XC is your thing, check out Niner’s new race bike, the RKT 9. Even with just 100mm of suspension out back, the JET is confident in 90% of trail riding situations. It can tackle steep and technical terrain all day, you just can’t go as fast as you could on a 160mm bike. The trade offs being the Niner is going to climb better, pedal more efficiently, and be less of a handful in tight trails.

This is a bike for most mountain bikers and most trails. There are lighter bikes that will be faster on smooth trails and burlier bikes that can take on chunky descents better, but with the right pilot, the JET 9 can hang in either scenario. While my current personal ride is a 160mm 27.5″ trail bike–which I love–I’ve been thinking more and more about downsizing. When the time comes to replace that bike, the JET 9 will be on my short list.

Aaron, thanks for a thorough and lucid review of a bike currently on my short-list. 2 quick questions for you: 1) Is chainstay length enough of an issue whilst manualing or bunnyhopping to look elsewhere, and 2) Can the Jet be “woven” through twisty trails with relative ease? A little concerned in this two areas as I’m coming off a 27.5 xc hardtail.

Hey Chet – thanks for the questions. Niner just updated the Jet and chopped 20mm off the chainstay length! They also made it slacker and longer. It looks to be a much different bike than this one. Coming from an XC hardtail, there will be a learning curve for any full suspension. That said, I never felt like this bike was cumbersome going through tight stuff.

Thanks Aaron, I really appreciate your feedback! Just checked out the new Jet RDO and they really swung for the fences w that one, looks amazing!