After my review of the Archer D1x, I wanted to go through a weird project that I took on with some help from Archer Components.

While I’ve loved the D1x on my mountain bike, I wanted to play around and see if I could hack it to work on my drop bar gravel/commuter bike.  I contacted Archer about my plans, which basically involved ripping the remote open and soldering in buttons or “blips” to install under bar tape to control the shifter. They informed me that the remote is internally potted to prevent moisture ingress, so that option wouldn’t work. Archer did allow me to purchase an unassembled remote unit, so I could tinker to my heart’s desire.

I started by removing the soldering for the existing remote buttons. I took pictures along the way so I would know how everything went back together. I drilled two holes in the case and ran the wires inside. From there, I soldered each wire to its respective connection. I also soldered in gold plated “banana connectors” on the other end of the wires to act as a quick disconnect if I needed to move the buttons or add more wire length. I bought a bunch of cheap momentary-on switches from Amazon and connected the wires to those.

At this point, I had a bird’s nest of wires, and it was time to test it. Once the battery was inserted, everything worked as it should, so it was time to clean everything up. I sprayed the internals with conformal coating to prevent moisture damage, reassembled the remote, and potted it in epoxy. I mounted the remote to the bar using a matchmaker that I stretched to get on (I’m using 26.0 Nitto bars) but you could use a Paul SRAM Shifter Adapter for 31.8 bars. I then put a pad of hot glue under each brake lever and pushed my buttons into it to create a wide pad around the button to secure it to the bar. Once dried, I taped my wire to the bar and wrapped the handlebars.

This setup is on my Surly Pack Rat, which I use as my commuter but also for hitting a good bit of gravel and light singletrack with it. I’ve been running it to a Microshift Advent 9-speed derailleur. Currently, I’m just using an 11 speed 11-46t cassette as a “budget mullet” set up. I have it set so the right button drops into smaller cogs, while the left brings it back up the cassette. The shifting is actually pretty similar to the SRAM eTap system, and it has worked like a charm since install. I’m hoping that Archer offers a factory drop bar system soon because it could be a really cool and affordable option for doing your own “budget mullet” builds.

Thats really interesting, I took a rather simplistic approach for my 1X Gravel Bike and just mounted the remote on curve of the drop bar so it sits basically where the brifter paddle would be. In my head I thought it would look rather ugly but in practice it looks pretty neat.
https://ibb.co/K7m50r0

I realize this has been a bit, but I’m just about to attempt the same under the lever mounting. What did you use for the drop bar clamp? Just spread the regular 22mm clamp to fit? Any issue with the lever hitting the unit when braking?! (If you respond, I’ll assume you’re not dead, so no issues.)

Very much alive LOL. You are correct I spread out the clamp that came with the unit to get it around the curve you will need a slightly longer bolt as the clamp will not close up enough on the curve. No issues whatsoever with the brake leavers. My only advice would be go for a short ride, with a multi tool before you wrap the bars to tune the position.

Thanks for the pro-tips 🙂 Also, I heard back from the folks at Archer today with a link to this update on an official climbing button remote: https://youtu.be/QgH4ClxCRK0

I’m sure I’ll get this dialed in just in time to get the real thing, lol.

Patrick, inspired by your hack, I’m attempting something similar. I see you got your switches from Amazon. I’ve looked and looked but haven’t been able to find switches that are a low enough profile to use the way you have. I did get switches from Amazon for a similar project, using Xshifter, on my gravel/cx bike but fitted them in the space left after removing the shift mech in the hoods. Current project with the Archer D1X trail is going on a road bike and, as I’m keeping the mechanical front shift, I can’t put a button in the left hood. Also, maybe I should be contacting Archer about this, I haven’t been able to work out how the two halves of the remote are secured together. Also again, do the switches you sourced have a positive click(mine don’t)? 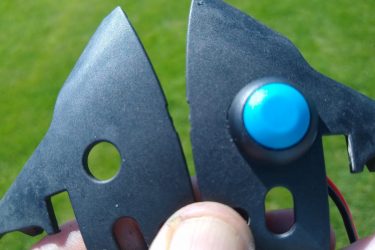