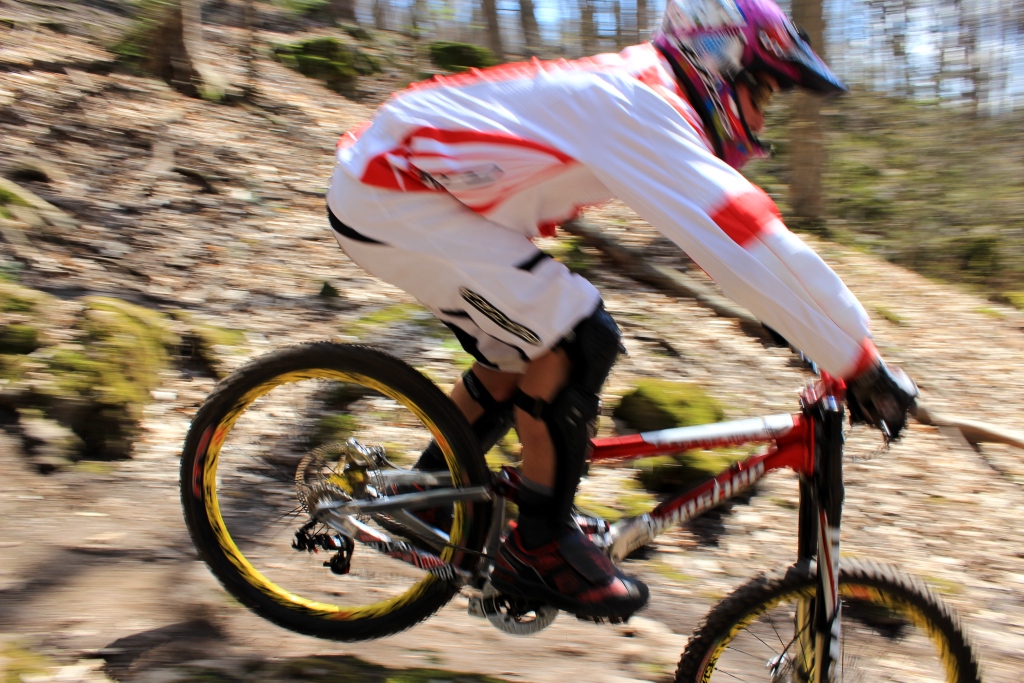 The Mavic DeeMax Ultimate is one of the lightest DH specific wheelsets on the planet! Already an icon in the DH world, many of the top DH mountain bikers run these wheels and it’s easy to understand why.

Mavic has been producing high quality gravity-oriented products for some time now and still manages to improve its products. The DeeMax Ultimate wheels weigh in at 1,965 grams (AFAIK, the only ones below 2,000) while the next lightest competitor’s wheels weigh 2,050 grams. Now that weight is all in, valves included. The Ultimates feature a UST rim meaning there’s no need for rim strips and the UST valves are provided.

Speaking of the rims, Mavic ‘drills’ only one wall of the 21mm internal width rim (good for tires from 2.3″ to 3.0″). This is what Mavic calls their Fore drilling process; essentially the process uses a ton of friction to displace a quantity of material to the side of the hole just before the drill pokes through the wall of the rim. The displaced material is then threaded and becomes the holes for the Mavic-specific spoke nipples. Seeing that the inner wall is not affected there is no need for rim tape and a seal can be formed.

Mavic’s SUP process also helps ensure a stronger, lighter rim. Essentially after bending the rim, the rim gets welded together and its surface is milled smooth. This jointing process really improves the overall strength of the rim. The rim itself is made from an aluminum alloy called Maxtal. Now this isn’t a 6061 material like others use, though I can’t say exactly which type of alloy Mavic is using. It could very well be a similar 6000-series aluminum with a specific treatment process kept secret by the company. 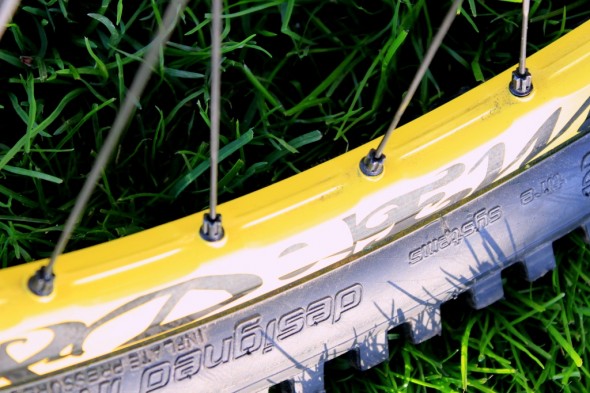 Mavic uses an “Interspoke milling process” to remove non-structural material from the rim’s surface, leaving only what’s needed for strength. Looking at the rim you can see a slight build-up of material around the spoke holes as well as a spine of material along the center of the rim.

On other Mavic wheels I’ve reviewed, the company used Zircal spokes which are not found on the Deemax Ultimates. Mavic decided to go with bladed and double-butted stainless steel spokes here to add to the durability of these wheels. Mavic also specially designed the hub using their SRS system to arrange the spokes and keep them in place, preventing the spokes from popping out of position. This is a great feature since the Ultimates do have a bit of flex built into the rim (which allows the wheels to absorb some stresses without cracking). I spoke with Sean Sullivan from Mavic and he mentioned that the ability for the rims to flex was an important trait that some of the top level DH riders wanted in a wheelset. Because of the small amounts of flex that may happen on the gnarliest of courses in the rocks, they had to make sure spokes didn’t pop out. 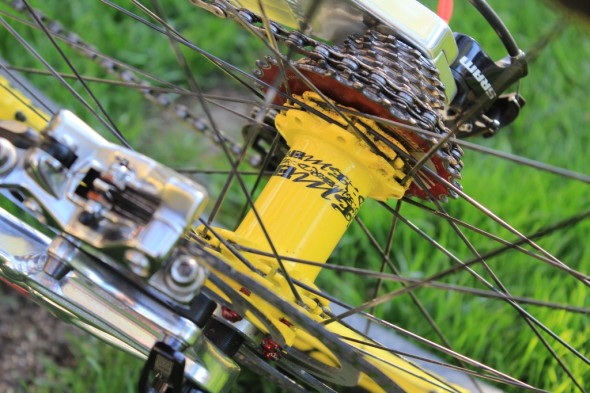 The DeeMax Ultimate hubs are only offered in a 20mm through-axle front and 12x150mm rear configuration. If you have a bike with a 12x135mm rear, go with the DeeMax wheels (slightly less expensive) and 23mm inside spacing on the rim.

The freewheel hub features Mavic’s ITS4 cassette body which uses two pairs of cam pawls for fast engagement. This works great for the rider who wants to just kick the cranks a bit rather than try to stroke the pedals while floating over rocks and roots. It takes very little crank rotation (about 5 degrees) to engage the wheel compared to other hubs I’ve used that need double that or more (though to be fair Mavic isn’t the only company offering quick-engaging hubs).

Servicing the hubs and replacing parts is a cinch thanks to an intelligent design. I really like the way the cam pawls are arranged and how they engage the hub. The cams have been designed with as large of a diameter as possible to engage right under the drive spokes which produces a more direct path of power. With two bearings supporting the cassette body along with the other two bearings supporting the hub itself, this makes for a hub that performs solidly. Up front you get two over-sized bearings sitting within the hub and the stout axle shaft. Freeplay from the bearings cans be finely adjusted using the bearing tool (supplied with the rear wheel). 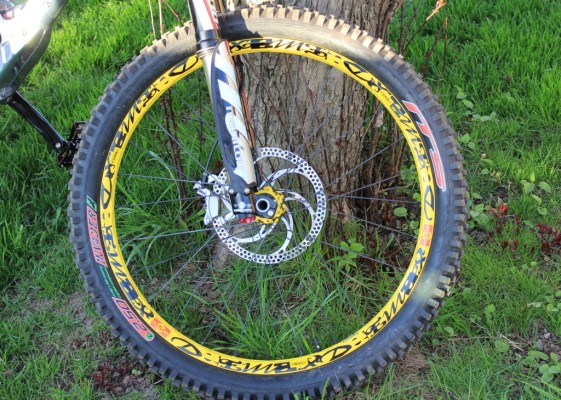 Seeing that these wheels are UST I decided to run my wheels tubeless for the duration of my review. I used Stan’s as sealant (4 oz. with 2.5″ tires was needed to seal things up) and soapy water and away I went. The lack of a tube increases the response of the wheels for sure. There is less resistance to the whole set-up as these wheels are all go when you’re on the pedals. 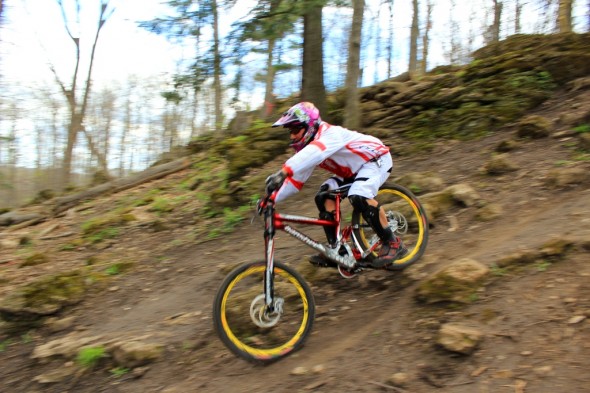 How do these feel on the slopes? In a word: Awesome! The Deemax Ultimates can really send it. The minimized rotating mass makes these wheels feel like someone hid an electric motor on the bike to propel me down the hill. These wheels really do accelerate quickly. When I am off the pedals and descending, I don’t slow down and I got super quick changes of direction and responsiveness all day long. Compared to some wheels that take a bit more effort to get you moving, these just go.

A while back I reviewed the Crossmax SX wheels and loved them. Now, picture the Deemax Ultimates as the bigger, tougher brother. Many of the technologies are shared between the two, just scaled up for World Cup level abuse. At first I was a bit worried that these lightweights wouldn’t hold up to rockgardens and serious gnar. But after hitting the step downs and rock gardens at a few familiar trails, I quickly realized these can take more than I am willing to give them, even with the tires on dangerously low pressure (oops!). At such low tire pressures the Ultimates stood up great – not a single ding and they held my limp tires firmly in place despite the fact that the tires should have peeled right off the bike.

Mavic offers a program called MP3 which, when purchased at the same time as your wheels, will cover your wheels for two years no questions asked. So if you do trash a rim, you’re covered. All you have to do is send them back (at your cost) and they rebuild the wheels and send them back to you. Not a bad insurance policy for those who like to shred! 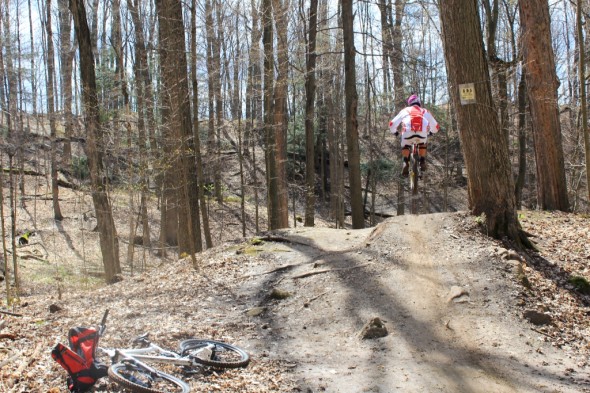 If you’re an aspiring DH rider and really want to step up your game, grab a set of Deemax Ultimates. For ultimate speed and agility these wheels are right up there with an MSRP to match ($1190). Hey, no one ever said high performance would come cheap. If you’re planing on going big (I mean really big) you may want to consider the slightly heavier and less expensive DeeMax wheels ($899 MSRP). Whichever way you go, Mavic will get your rolling.

I would like to thank Mavic for sending up the Ultimates for review. Another quick thanks to the folks at SRAM, Rockshox, Banshee, Loaded and THE.

I recognize those tires: http://www.singletracks.com/blog/singletracks/diamondback-gear-contest-winners/

Good eye. Yes they are ITS but not the 909’s, these are the Invader 2 ply tires… These are good for a variety of conditions.

cuttin’ it pretty close to the tree there haha, do I spy a commencal on the ground?

Nope that would be a Rocky Mountain Slayer

aaah, thanks, the seat-tube split thing just looks smilar to the commecal bikes

nice rig by the way. I’m quite jealous

Thanks….Rocky has had the split tube running the shock like that for years….Slayer, Flatline both have it running the same way.

Owned a pair of mavic wheels, didn’t even make it through a season.will never buy another pair the rear hubs can’t take any abuse.Cassettes tear into free hub making it very difficult to remove cassette.

Which mavic’s did you own