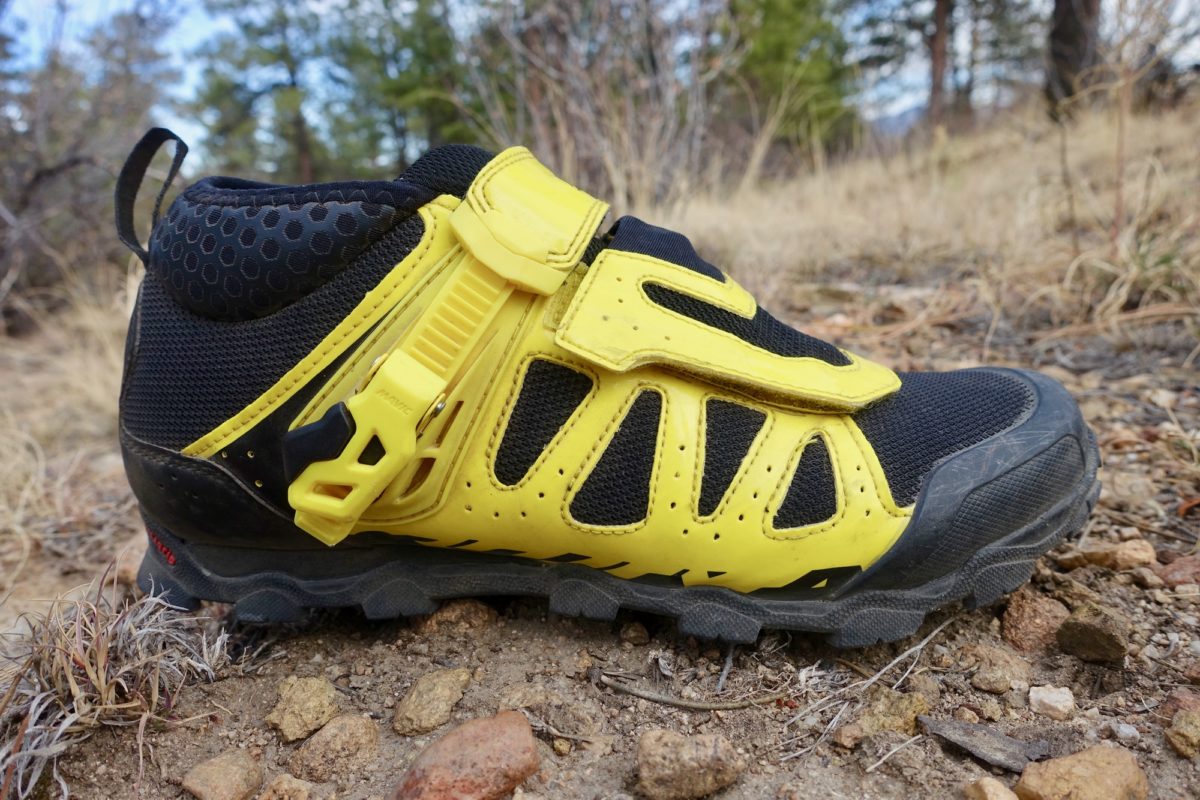 After my Mavic Crossride Elite shoes disintegrated during a hike-a-bike up a Colorado mountain, Mavic sent me a pair of their higher-end Crossmax XL Pro shoes to see if they would handle the brutality with more rigor.

The rubberized, lugged outsole on the Crossmax looks nearly identical to that on the Crossride, but the closure system on the Crossmax is much more advanced. It features a three-part closure: a quick pull lace, which is covered by a flap secured by velcro, and finally a ratchet up top. 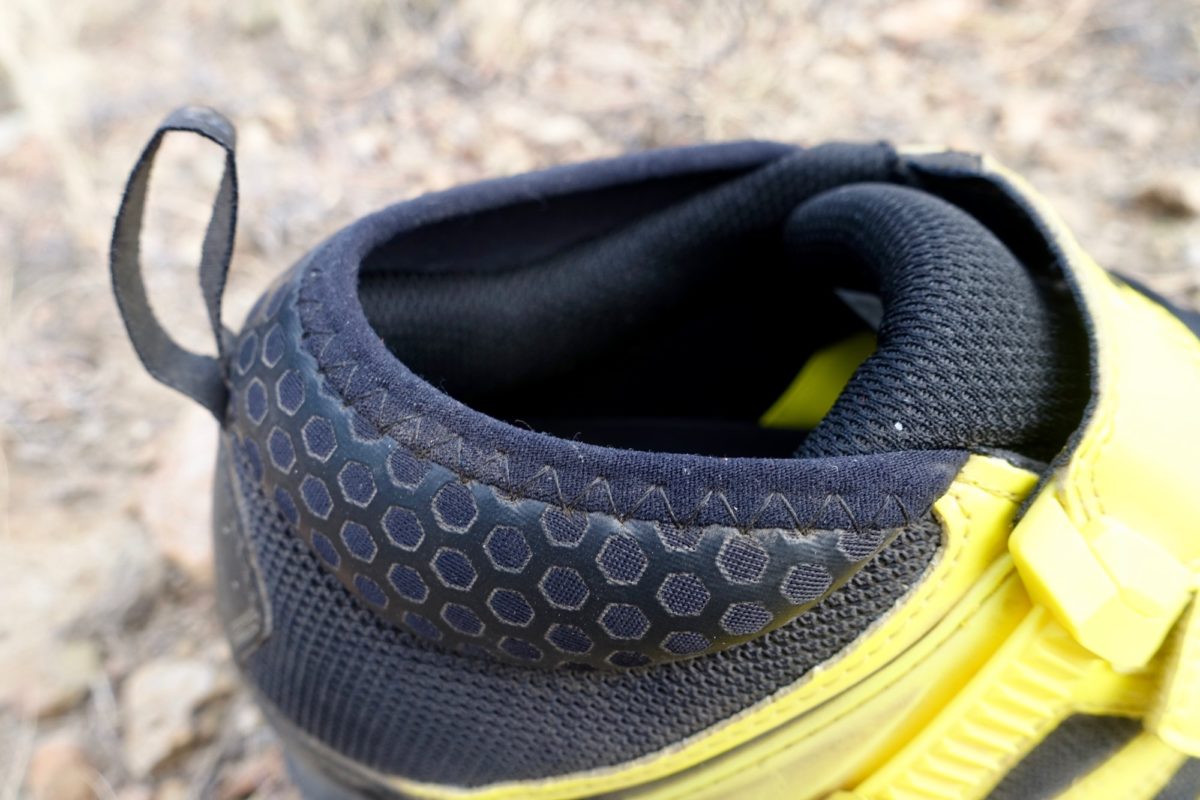 The back of the shoe also features a neoprene sleeve to keep rocks and sand out of your shoes.

Compared to the Crossrides, the Crossmax shoes aren’t significantly more expensive–only $60 more, at $180 MSRP. Compared to many shoes on the market, this is a very competitive price.

The Crossmax XL shoes provide a very secure feel on the foot, wrapping snuggly thanks to the pull-lace closure, the ratchet system, and the built-in elastic in the tongue of the shoe. Specifically, I found the ratchet to be a significant upgrade over the velcro strap of the Crossrides. While this snug fit meant that I couldn’t use a custom, supportive insole in these shoes, it did mean that they didn’t wash around in off-camber hike-a-bikes and while scrambling up and over boulders.

While pedaling, power transfer to the pedal felt efficient, and my feet didn’t complain in these shoes despite several all-day rides. On the surface, in a cursory exam, the Crossrides seemed like a great pair of shoes. Yet as I dove deeper into the test, I found that not everything was as happy go-lucky as it seemed. 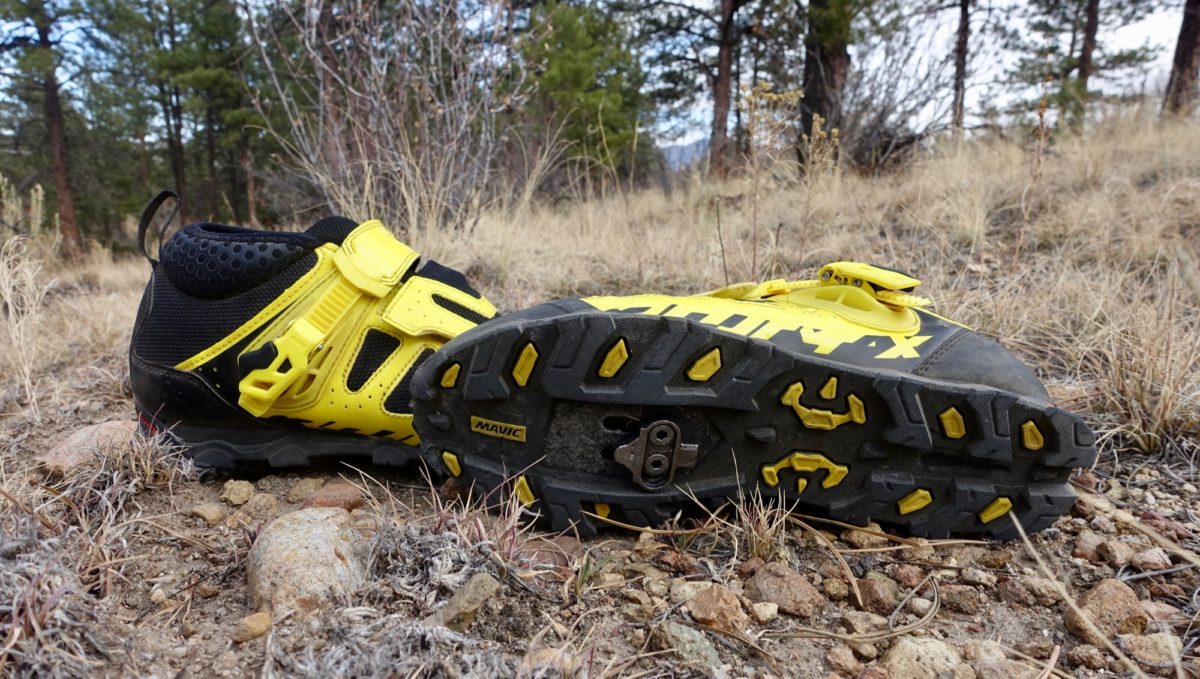 Full disclosure: unfortunately, I was not able to put the Crossmax shoes through the same 14er scree field gauntlet as I did with the Crossrides, as the snow fell and winter set in. The 14er scree field scramble has become my gold standard for testing shoe durability. If I have the opportunity to take these up a mountain peak this summer, I’ll do my best to report back with my findings.

Instead, I used these shoes in what could be considered more normal circumstances–much more pedaling, much less hiking. While of course I’m always pushing my bike here and there, the lower elevation desert trails here in Colorado and some moderate hike-a-bike in the mountains of Scotland didn’t put the same level of punishment on the soles of the Crossmax shoes. That said, I still found the soles to wear rather quickly.

Despite much less use and abuse, small knobs on the inside toe of the shoe disintegrated within just a couple of rides. Over the course of my test, the rubber sole quickly showed wear and tear. 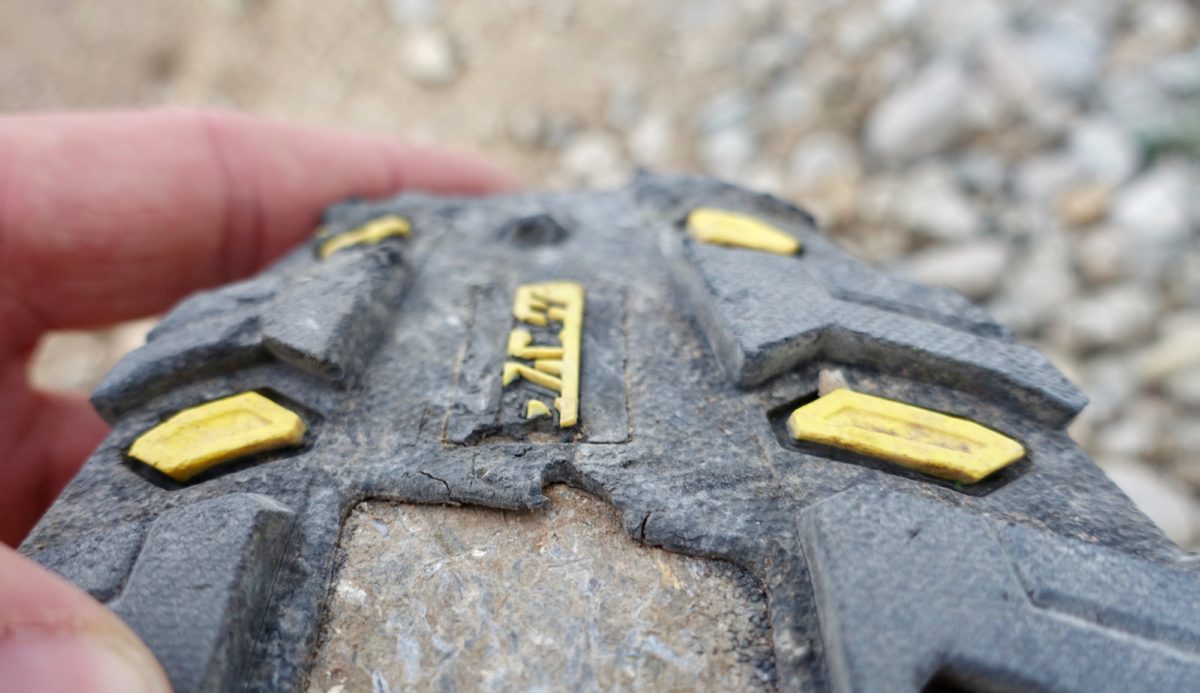 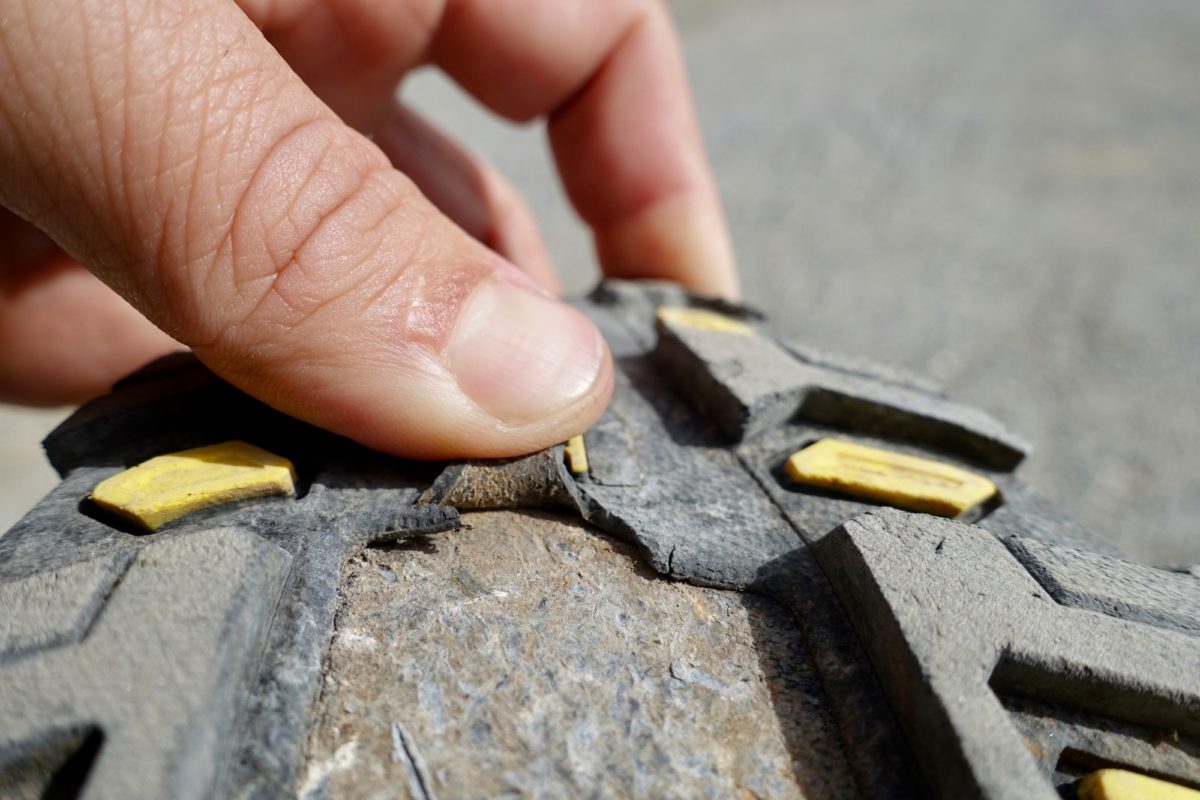 In front of the cleat, the rubber on one the shoes has started to peel back already. If you re-read my Crossride review, you’ll see that this is one of the exact same wear patterns that I noted in the Crossride shoes, just in a less-developed stage. With more hike-a-bike, this rubber will likely continue to fall apart.

I also found the Crossmax shoes to introduce a new issue that wasn’t present on the Crossrides. In the wet and muddy conditions of Scotland, I found the lower velcro flap to be very susceptible to mud and gunk, preventing the velcro from sealing. While not a major issue, I found myself riding along with a big flap of velcro whipping back and forth as I pinballed through Scotland’s slimy rocks. 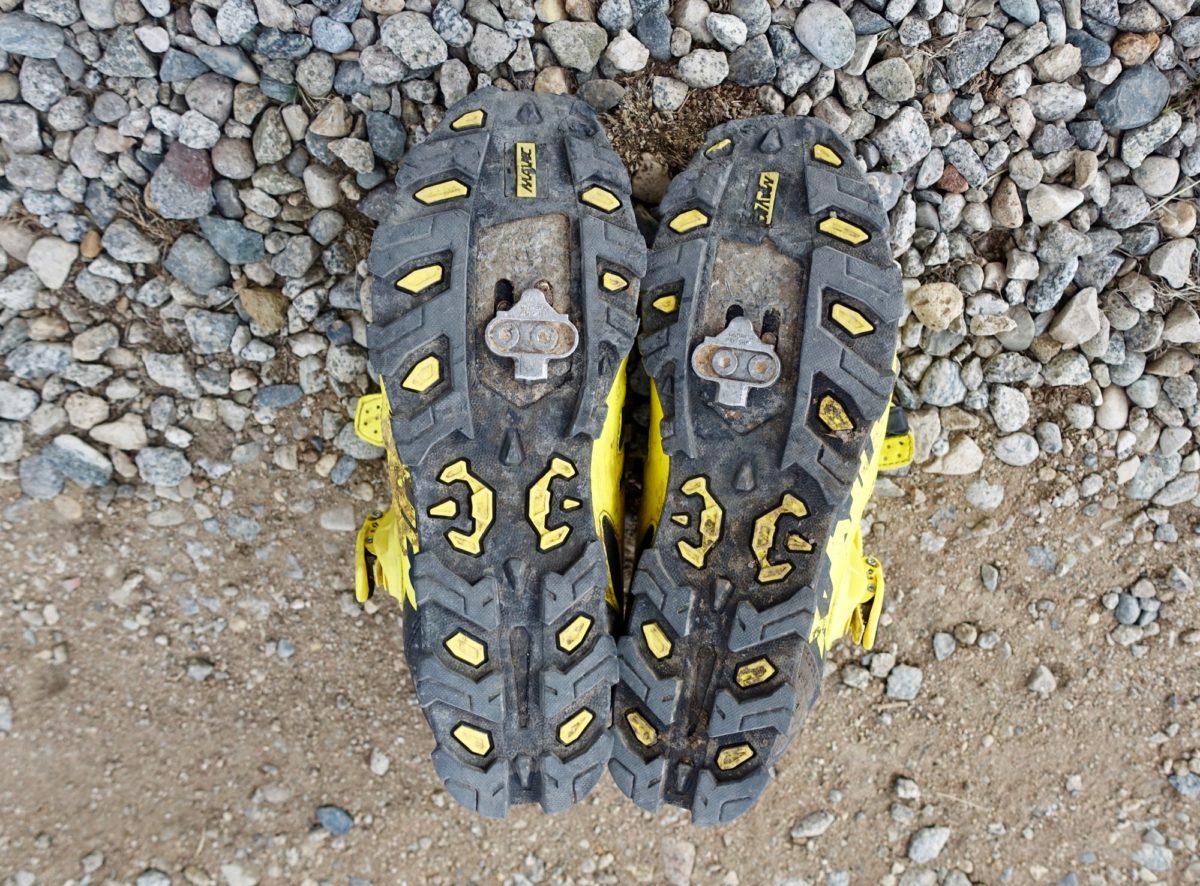 Did the Crossmax XL shoes fail me immediately and utterly? Of course not. Did they stand up to my test like I’d expect a pair of enduro shoes to endure? The answer is also “no.”

According to Mavic, “this was the world’s first enduro-specific shoe, designed in partnership with World Champion Jerome Clementz and pro rider Fabien Barel.” Other acquaintances of mine have reviewed these shoes with glowing accolades. So what gives?

All of the folks mentioned above are astronomically stronger riders than I am. While I can indeed ride all day, I am no Jerome Clementz or a Fabien Barel. Simply put, I spend more time pushing my bike than these vaunted pros.

I’m much closer to the everyman rider than Fabien Barel will ever be.

The more time you spend on your feet pushing your bike up a hill instead of pedaling it, the more wear and tear you’ll put on the soles of your shoes. So if you only need the rubber outsole for the occasional off-bike scramble? Great! If you plan to push your way 8 miles up a 14er? Maybe you should look someplace else.

Thanks to Mavic for providing the Crossmax XL Pro shoes for review.