Back in 2010 I reviewed the Kuat NVbike rack, and I still love it and use it to this day. The rack came with a choice of a 2″ or 1.25″ receiver and if you recall (or re-read that post again), it was finished in a fancy semi-metallic gray with orange-gold anodized parts and retailed for about $550 USD, which could be pricy for some.

Kuat recently released the NV Core, which is a trimmed-down version of the NV offering up just the bare essentials.

The NV Core comes in a cool stealth black, with chrome and anodized aluminum parts. This time around the NV has a dual-purpose hitch that can be easily adapted from 2″ to 1.25″. You still have a 60 lbs x 2 capacity, strong enough for even the heaviest DH rigs. The NV keeps the extruded aluminum arms with welded steel chassis plus the tilt down feature, which comes in handy when you need to get ice in the cooler on the way to a long ride. The lever on the right side still makes quick work of folding up the rack for storage.

In case you’re wondering, the NV can load a bike with a maximum tire width of 3″ and maximum wheel base of 48″… so pretty much any MTB out there will fit (except maybe a Surly with 5″ wide tires). 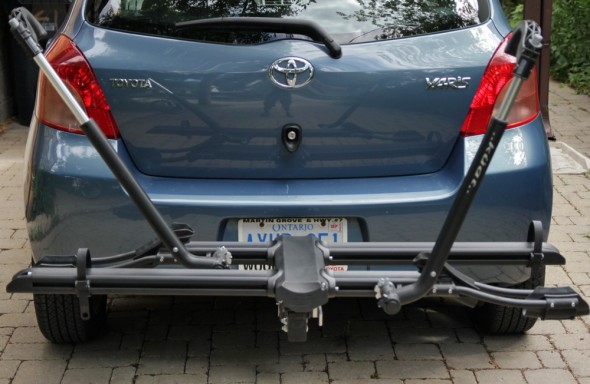 Between the bikes you have 10.5″ of space, allowing for ample room and no bike contact.

Installing a bike on the rack literally takes only seconds. Cinching the rear wheel with a strap and clamping the front wheel close to the fork is all that is needed, so there is no contact with the frame’s paint. The NV Core will easily fit 24″ to 29″ wheels without the need of any adapter. 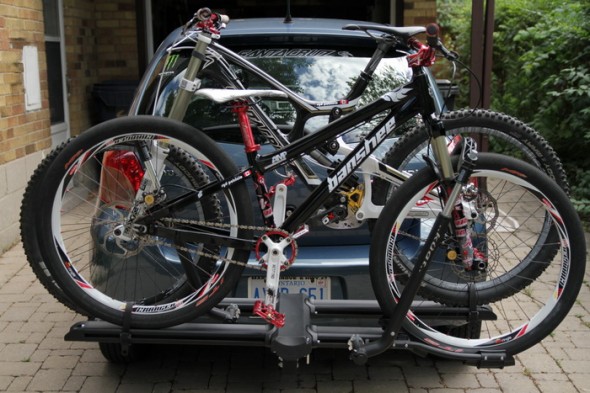 The bikes stay put when installed properly, there’s ample room between bikes, and they are easy to remove. I personally had to move seats around when it came time to carry two of my own bikes as the seats and bars would touch, but that’s nothing new as many other types of racks require this. I did have one minor concern and that is the 1.25″-2″ adapter. For my hitch, it felt a bit slack, allowing for a bit of extra sway which did cause me to raise an eyebrow–but ultimately nothing was going to fall off.

Overall I would say the NV Core is a great rack!The quality of the NV Core has not diminished from the flagship NV at all, and it performed superbly on long trips such as my trip to Mountain Creek Bike Park.

For a price of $439 you get the no-frills NV Core rack that offers great performance in a dependable package. If you feel that you need a cable lock, it retails for an additional $39.

I would like to thank the folks at Kuat for sending down the NV Core for review.

Videos
A Day Riding From the Forest to the Sea in...
Videos
Watch: Trail Bike Trials in the Desert with Aurelien Fontenoy
Gear
NS Bikes Goes Long on the New Define AL 170...
Gear
Banshee Prime V3.2 All-Mountain, 'Do-All' Bike In for Test

Gear
Why Kids Bikes May Need to Take a Hint From...
Trails
Reverberations from the Bike Boom Continue to Rock Trail Traffic
Progression
Feeling a Little Sluggish on the Trail This Spring
Community
Klunking for Kyle: Commemorating a Life with Mountain Biking's Original...
Subscribe
Login
Please login to comment
7 Comments
Most Voted
Newest Oldest
Inline Feedbacks
View all comments

I really like my Kuat Sherpa which has most of the features you mentioned. I haven’t had any issues with the hitch adapter but I do try to wrench it down as hard as I can to eliminate any play in the receiver. Can’t beat the convenience of getting bikes on/off this rack!

How much does the rack weigh? The Sherpa is a little heavy in my opinion but that’s mostly because I store it in the basement and I have to schlep it up the stairs whenever I use it. 🙂

LOL, I’m surprised your Yaris doesn’t do a wheelie with those heavy DH rigs out back!

I’ve just noticed that the clamp on my Thule Big Mouth roof rack is starting to wear out, and it’s not replaceable, so I’m going to be in the market for a new rack soon. I love roof racks, but hitch mount seems to be wear the market is going these days.

Does it still create rub on the fork of some rigid 29er setups? I have seen sub on the carbon fork with niner one9 with niner carbon fork. Do you know if this is the case still?

I haven’t seen that on my 29er fork (rigid or suspension). The padded rubber on the inside of the wheel hook is being worn away on my rack just from vibration on the road. So does the hook contact your fork directly instead of the padded rubber part?

I’d add to what Maddslacker said, and say that hitch mounts with TRAYS are becoming all the rage, and for good reason. I think I’d way rather have a track rack than my hanging rack.