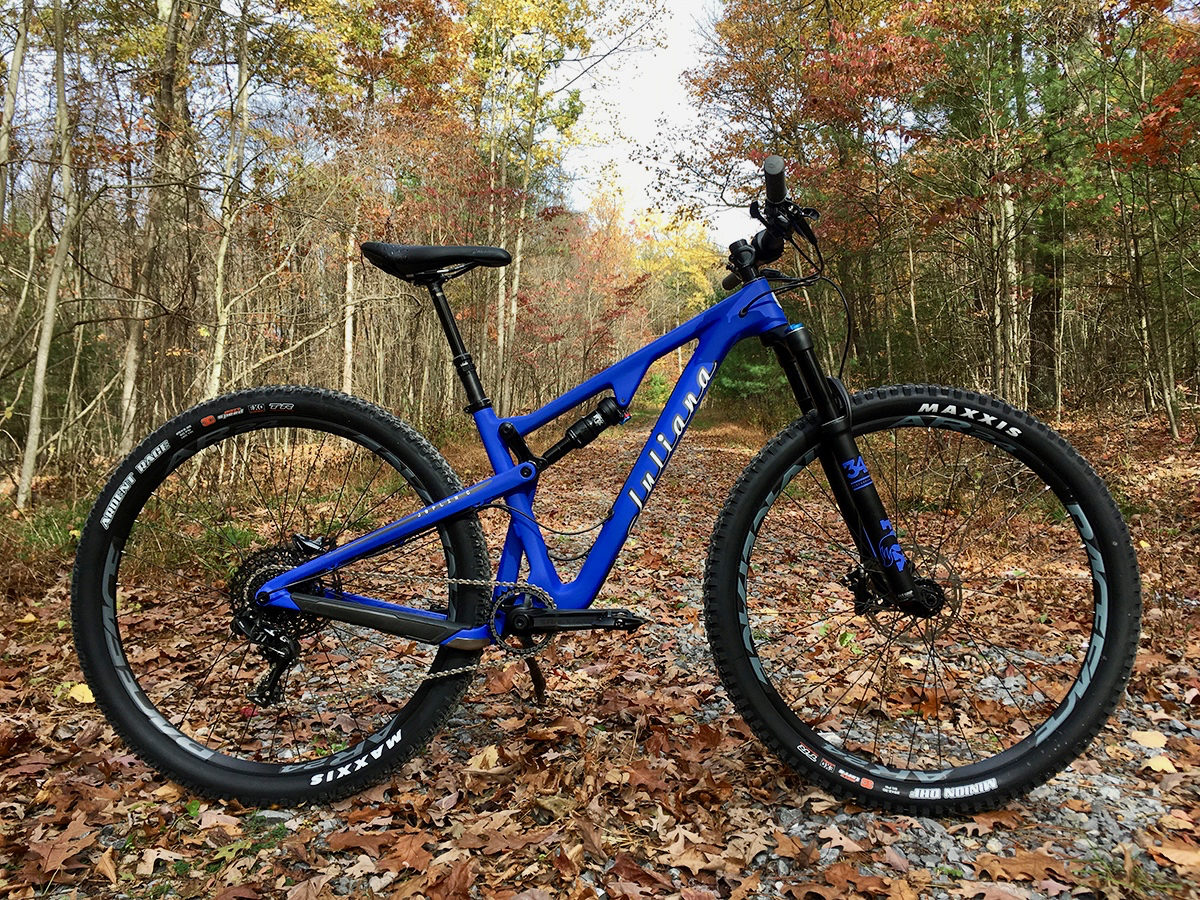 In 1999, pro rider Juliana Furtado created the first women’s-specific mountain bike with the help of Santa Cruz Bicycles. Called the “Juliana,” this first bike eventually evolved into its own brand by the same name. In the years since, Juliana has become a key player in the charge to create bikes for women who can ride just as hard as men, and who need bikes to fit those needs.

Juliana is still affiliated with Santa Cruz Bicycles as its sister company, boasting the same high-quality frames, builds, and performance in three different models. The Roubion is an enduro/all-mountain shredder, the Furtado is a do-it-all trail bike, and the Joplin bridges the gap between cross-country endurance machine and trail rig, with the option to run either 29-inch or 27.5+ wheels with either a 120mm or 130mm fork.

I rode around on the 29er version of the Joplin for the past couple of months and put it to the test on Pennsylvania’s rocks.

All Julianas are built around Santa Cruz frames, so the Joplin is basically the same bike as the Santa Cruz Tallboy. The only differences are the saddle, frame paint, and a shock tuned for lighter riders. But while the Tallboy frame is offered in aluminum as well as carbon, Juliana has stuck with only the latter frame material. Santa Cruz and Juliana offer two different types of carbon frames: a high-grade CC carbon and a more affordable C carbon option that doesn’t compromise on stiffness and strength, but does come with a weight gain of about 250 grams (0.6 pounds). The reason being, more material is used to create an equally-strong frame for less money (C models start at $3,599, while CC models start at $6,099).

Juliana frames utilize Santa Cruz’s VPP (Virtual Pivot Point) suspension linkage, which allows the engineer to manipulate the suspension setup, so each of their bikes is fine-tuned for its intended purpose. The VPP system allows for compact suspension designs, providing an aesthetically-pleasing bike. External grease ports on the links also allow for easy maintenance.

The frame also includes a chip to slightly change its geometry when switching between 27.5+ and 29-inch wheels, which is a nice feature that enables the rider to take full advantage of either setup. Juliana does recommend that 27.5+ wheels should be run with a 130mm fork, so theoretically, you’d want two different forks if you planned to utilize both configurations. I, however, am a big fan of jury-rigging things, so I’d probably just try the plus wheelset with the 120mm fork first and see how it goes. It would be an interesting test to see how much of a difference the fork, as well as the frame chip, makes in the real world. It’s likely that the bottom bracket could be a bit too low and pedal strikes would become a bigger issue. But, I digress.

Each of the two frame options also comes with several different build options, as well as a choice of 29 or 27.5+ wheelsets on the more expensive builds. I personally opted to test the 29er version simply because it had been a while since I’d ridden a 29er full suspension bike long-term. I’ve been riding plus and fat bikes much of this past year, and I figured it would be good to switch it up and give the ol’ 29er some love.

The squish factor is provided by a Fox 34 Float Performance 120mm fork and a Fox Float Factory Kashima 110mm shock. Juliana just upped the travel on the shock from 100 to 110mm for this year. The Joplin also gets a RockShox Reverb Stealth dropper with 125mm of travel on small frames, and 150mm on medium and large. 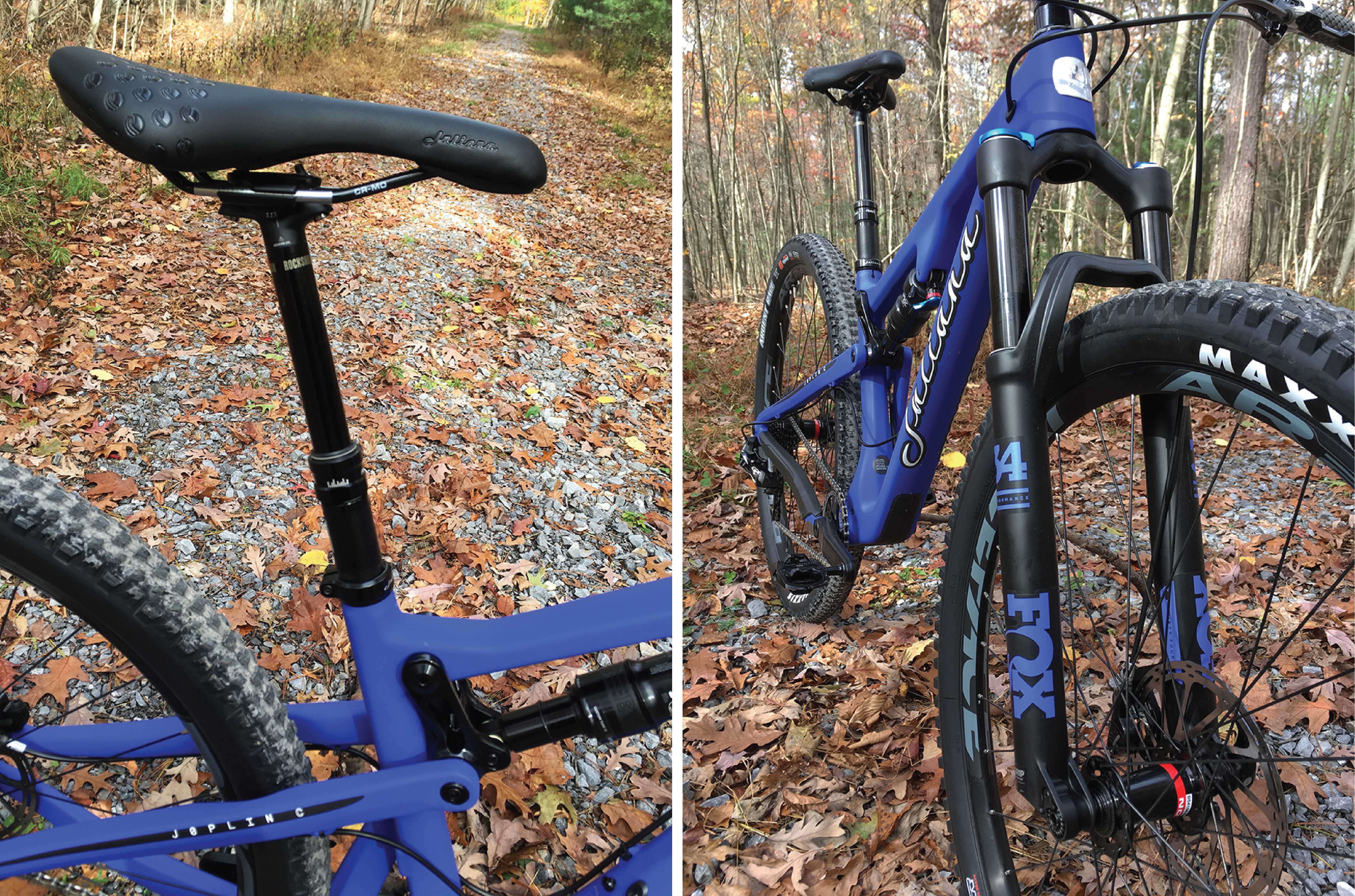 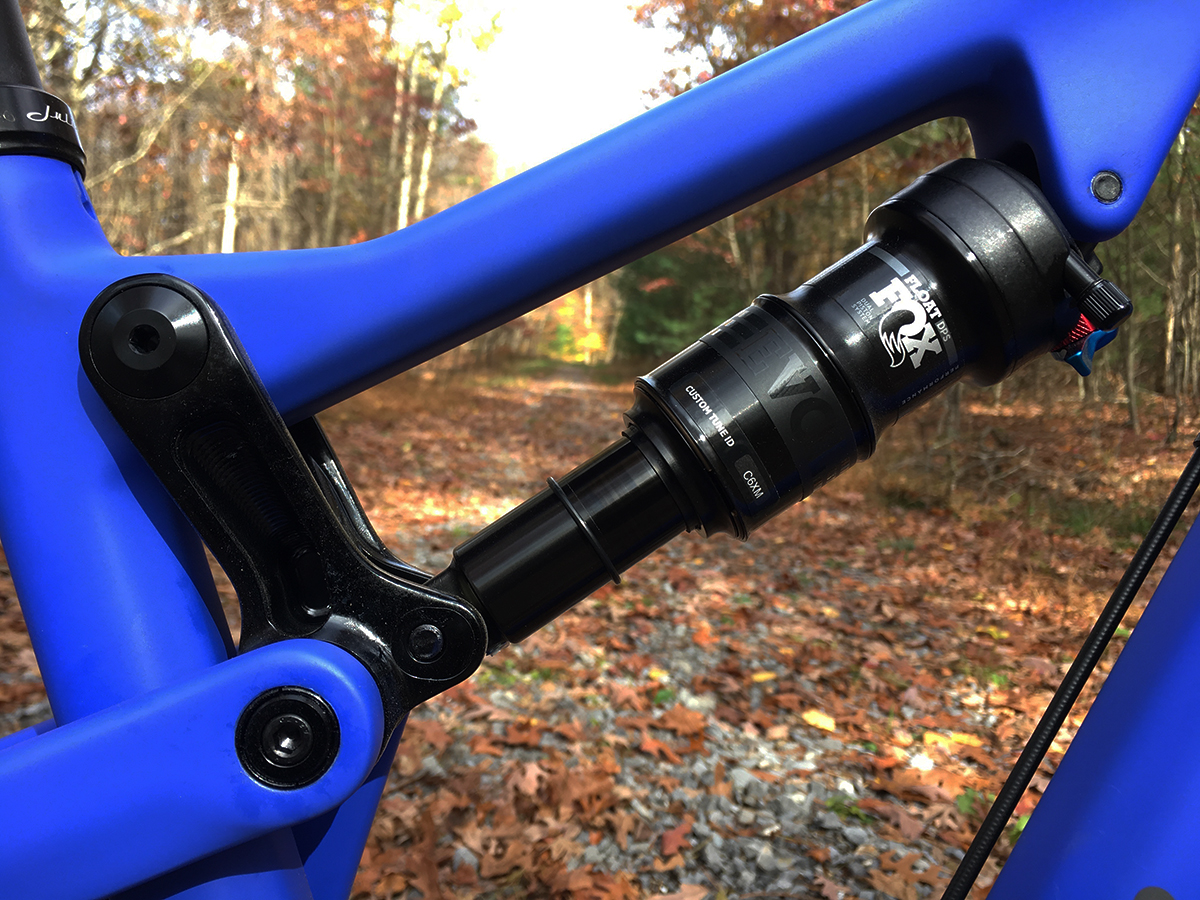 The Joplin is spec’d with Race Face AR 24 rims and Maxxis tires–a Minion DHF Exo on the front and Ardent Race Exo on the rear. Hub spacing is the latest Boost standard: 15×110 front, and 12×148 rear, with Novatec hubs. The cockpit features a Race Face stem and 760mm bars, and a women’s-specific Juliana Segundo saddle and grips.

Other features include a threaded bottom bracket, one water bottle cage mount on the down tube, a front derailleur mount, and internal cable routing. The bike as tested weighs in at about 28.5 pounds. 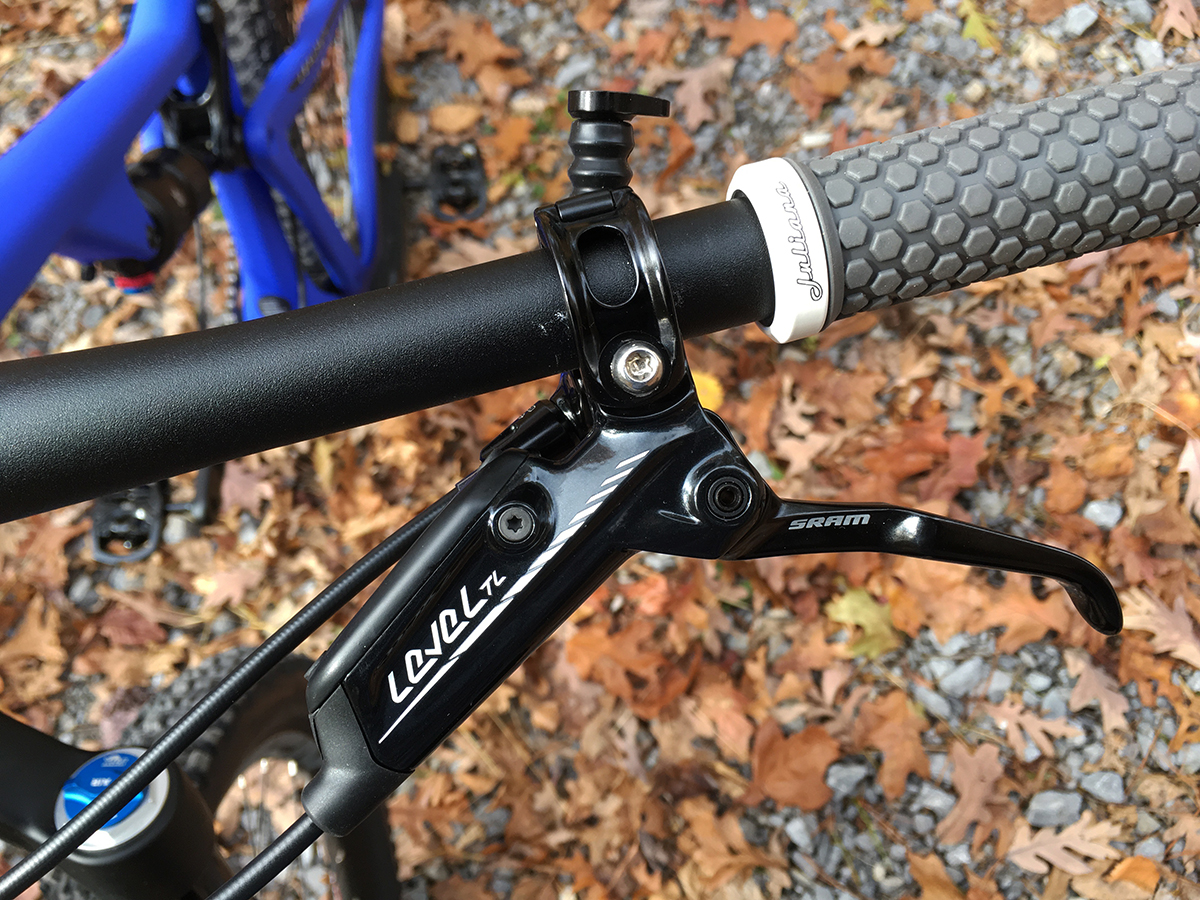 “Dang, that’s a good-looking bike,” may have literally been my first thought when I pulled the Joplin out of its box. The ultraviolet-colored matte carbon frame is undoubtedly pretty–and isn’t necessarily girly. I swooned for a while, took a couple obligatory “look at my new beautiful bike!” pictures, and got to assembling the pieces of my latest test rig.

Off the bat, I was really happy that the Joplin comes with decent tires. I very much share Greg’s frustrations about bike brands putting useless tires on from the factory to shave weight or dollars. Seeing a nice set of treads on a bike out of the box was refreshing, especially a women’s-specific model (which have in the past gotten bad reps for underspec’d components).

Out on the trail, it didn’t take me long to fall in love with the Joplin. It proved to be a comfortable ride, the size small fitting my 5’3″ frame well.

I was unsure how the 29-inch wheels would feel after getting used to riding the plus bike that I was testing all summer. Then, this fall, I was eager to ride my new fat bike, so it had been a while since I’d ridden any tire width less than 3″ other than on gravel. While there was a short adjustment period, I quickly got used to the skinnier tires and larger wheel circumference. As expected, I felt much faster overall than I do on the 27.5 full-suspension bike that I currently own. On the rocks and roots of technical central PA trails, the Joplin rolled over obstacles with ease, though I had to pick a line rather than just barrel over and plow through, as can be done to an extent with plus and fat tires.

Luckily, picking a line was a breeze. The Joplin’s 68-degree head tube angle offers a stable feel, but the bike handles tight turns and quick moves surprisingly well for a 29er. The stock bars were the perfect width for me–not so narrow that I felt like I couldn’t throw the bike around, which has been an issue with some women’s-specific bikes in the past.

I was very impressed with the suspension setup on the Joplin. Once I got it tuned to perfection, it was like riding on a cloud. The rear shock offered just the right amount of plushness–soaking up all the little bumps, while not sagging and bucking too much in bigger holes. I was able to ride across trails full of baby head rocks without getting beat up, or the suspension slowing me down. Even while climbing, I didn’t feel like I was losing much momentum to the suspension with each pedal stroke. On gravel road connectors to get to the next section of trail, I often used the lockout feature on both the fork and shock, and I found that it worked superbly. I could stand and grind without considerable energy loss. The bike felt smooth and efficient while climbing, though the rear tire struggled to maintain traction in wet conditions or on particularly steep sections, a problem that could be partially alleviated by some knobbier meat.

In addition to an ability to hold its own on the climbs, the Joplin also proved its capability on descents. While I didn’t feel as comfortable as I would on wider tires or a more downhill-worthy rig through loose, chunky stuff, this bike is a lot more confidence-inspiring than the numbers may lead you to believe. Smaller wheels and more travel would certainly allow for a more aggressive approach to downhills, but I still found myself keeping up with people who normally descend faster than me, thanks to the Joplin’s stable feel, compliant shock tune, and unexpected maneuverability.

It would have been interesting to get to test both versions of this bike, but that wasn’t in the cards this time around. I really liked the 29er version, but without any ride time on the plus build, I obviously can’t say which is best. As with most things, it’s more a matter of preference–what your riding style is like, where you ride, and how you like a bike to feel. For a more forgiving and playful ride, 27.5+ is the way to go, though you’ll lose the speed on climbs and flat sections afforded by the 29er.

Theoretically, the versatility afforded by a bike that can run both wheel sizes is awesome. In fact, it’s a feature that I’d like my next full-suspension bike to offer. In real world practice, however, I’m unsure about the practicality of switching between the two. Would I actually use both wheelsets, or would I just choose one and stick with it? I’d personally love to go back and forth, but I also know I’m just lazy enough when it comes to working on my bikes that I probably wouldn’t make the change, unless I know I’m going to a particular destination for an extended period of time that would warrant a different wheel size.

Speculation aside, I do know that this is a versatile bike, regardless of what you want to do with it. More options is a good thing.

Sometimes, it can be hard to put your finger on just what it is you love about a bike. You can look at the specs and the numbers, but there’s more to the story. Some bikes just make you feel at home in the saddle, and leave you with a silly grin on your face, dreaming of riding them again. The Juliana Joplin is one of those bikes for me.

For my personal riding style, it checks all the boxes of what I’m looking for in a full-suspension bike. While I enjoy bombing downhill, I also really love to go on long, all-day rides that cover a lot of ground, and I like to climb. That being said, while I do occasionally dabble in racing, I’m not a racer at heart. I want to play around, rather than just worry about getting from point A to point B as quickly as possible. While it might not be the best bike for any one particular application, I found that the Juliana Joplin is all-around fun for a wide variety of different riding styles and conditions.

A big thanks to Juliana Bicycles for providing me with the Joplin to review.