Much of what the Broadaxe is, and much of what it isn’t, hinges on Foundry’s mission statement. According to the Foundry website,

Foundry believes that a bike is a tool, a means to an end – not a trophy. It’s about producing purpose built high-performance carbon bicycles that aren’t traveling billboards – they’re understated, they’re cool, they’re anti-pretentious, and they’re meant to be ridden.

Let’s see how the Broadaxe 29er stacks up against that mission statement, shall we?

Foundry’s purpose statement shines through most notably in the Broadaxe’s visual appearance. Many mountain bikes on the market today go for the all-out bling factor: shiny parts, bright paint job, and more glitzy accessories than you can shake a bedazzeler at. And then there are some mountain bikes that are so shiny and expensive that they really are more suited to being propped up in your living room than they are shredding singletrack. Handmade Bicycle Show, anyone?

The Broadaxe, on the other hand, scoffs at all that glam and focuses solely on performance. The black carbon frame and muted graphics are the epitome of understatement. Of course, while there are plenty of blinged-out mountain bikes rolling down the trails, this backlash against excessiveness encompasses many more companies than just Foundry. Especially in the world of carbon, there are numerous bike companies churning out rather nondescript carbon frames. Ibex, as well as others, come to mind. 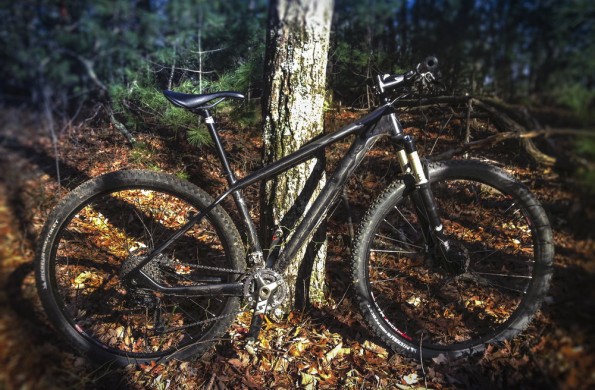 I covered the Broadaxe’s technical details in the “On Test” portion of this review. For more information, click on over and read part 1. But just in case you already read and forgot that previous blog post, here are the Sparknotes:

After spending considerable time pounding the Broadaxe, logging well over 200 miles on it, I can say with authority that the component package and build kit mesh superbly with the overall purpose of the Broadaxe, creating a bike that feels unified and competent in a variety of situations.

Here’s how it handled out on the trail. 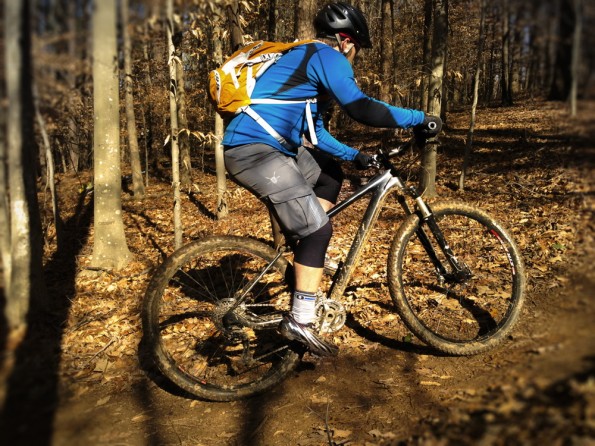 As I hinted near the end of my On Test article, this bike is fast! And at just 23 pounds (with pedals), you’d expect it to be. My first ride on the Broadaxe began with a heinously steep gravel climb up the infamous Winding Stair road in Dahlonega, Georgia. The longest, steepest, most sustained dirt climb in the region, we had been riding it a lot at the time to access a technical singletrack decent. Switching from whatever bike I had been riding before to the Broadaxe was a night-and-day difference. The Foundry seemed to fly unbidden up the endless climb, with superb traction and the energy of a mountain goat. Thanks to the 71.5 degree headtube angle, the front wheel tracks straight and true with no wandering even on anaerobically-steep climbs.

The Broadaxe rolls fast in the flats as well. Pedally sections of singletrack blur by and thanks to the stiff hardtail frame, energy from out-of-the-saddle surges are transferred with extreme efficiency to the rear wheel. While it’s hard to quantify without a laboratory, Foundry’s claim that the design of the rear stays boosts power transfer might have something to it. 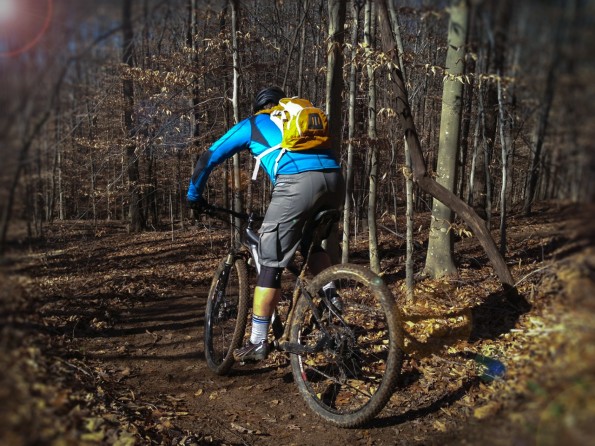 Carbon fiber 29er hardtails aren’t generally known for their prowess on technical descents. In other words, don’t load this bike onto a chairlift and expect to shralp gnarly DH runs. However, there are several key design factors that help the Broadaxe descend technical singletrack competently under normal riding conditions.

Most obviously, the Broadaxe features a 100mm RockShox SID fork. While most 29ers these days are running 100mm forks at a minimum, I do appreciate the fact that Foundry didn’t spec the bike with an 80mm fork.

While the 71.5 degree headtube angle is great on the climbs, it definitely isn’t confidence-inspiring while descending. However, Foundry does try to compensate to some degree by spec’ing the wider-than-average-for-a-stock-hardtail 720mm Whisky No.7 Carbon Lo-Rise bar. The interplay between headtube angle, bar width, and stem length and how they affect climbing and descending performance is complex, but I think that through the addition of a wide bar, Foundry has been able to achieve an excellent balance on all accounts.

Stereotypically, carbon frames are referred to as “laterally stiff and vertically compliant.” In my experience I’ve found this stereotype to ring true, and the Broadaxe is no exception. The carbon frame provides significant vibration damping when ploughing through the chunder, taking a lot of sting out of the rough sections. The carbon bar and padded grips help to further reduce the sting felt in the hands.

Almost all new high-end forks feature a through axle nowadays (and I wouldn’t buy one that didn’t), but rear through axles are surprisingly still not quite as widespread. In my book, the stiffness and wheel security that a through axle provides does wonders to boost the confidence I have in my bike in technical situations. In addition to the stiffness benefit, knowing that my wheel is locked in place and that the quick release won’t loosen up no matter how much chunder I shred does wonders for my peace of mind. While a through axle might loosen up slightly over the course of months if you never tighten it, the wheel will never simply fall out of the frame.

While admittedly I don’t think I’d ever willingly choose to ride a hardtail in Pisgah, I have pinned the Broadaxe through the nastiest gnar we have here in Dahlonega and it has coped admirably! Obviously this bike doesn’t descend like a full suspension trail bike, but for the riding I do on a weekly basis this hardtail is more than capable in all respects.

Foundry intended the Broadaxe to be a workhorse of a mountain bike… and it definitely fits the bill! Day in and day out the Broadaxe is prepared for some serious singletrack punishment and doesn’t slack in any category. Still, with a carbon frame, top-of-the-line build, and $5,600 price tag, this “workhorse” cleans up pretty well too!

As I look forward to the Cohutta 100 this spring, this is exactly the sort of mountain bike that I could see myself racing on. Hint hint, Foundry 😉

Many thanks to Foundry Cycles for sending the Broadaxe 29er down for review.

Gear
Never Underestimate the Power of a Good Zip-tie
Gear
The Maxxis Minion DHF Tire is Still the One to...
Gear
These MTB Deals are Fire, including 40% off Patagonia Dirt...
Gear
Mountain Bike Tire Repair Tips: From Emergency to Semi-Permanent
Subscribe
Login
Please login to comment
5 Comments
Most Voted
Newest Oldest
Inline Feedbacks
View all comments

Great review. It sounds like a well thought out build but to me it seems a bit more like a race bike than a workhorse. Foundry’s use of the term “high-performance” is probably code for racing but then all the other stuff makes it sound like the bike is a bit of an everyday bike. So is it both?

For example, I personally wouldn’t put XX components on a bike “that’s meant to be ridden.” I’d save those for race day–they’re definitely lightweight but have a reputation for being more fragile than say X0 components. So maybe the build dictates which end of the spectrum the bike is addressing?

“So maybe the build dictates which end of the spectrum the bike is addressing?”

I think this is probably the key although, like you, I was a little confused as to the intended purpose. But based on the high-end build and some of the component choices, you could really go either way. This bike is super comfortable as an every day trail bike, but the very high-end build does lend itself to thinking of it as a race bike. Maybe the goal really IS for the top-of-the-line bike to be able to excel at all applications? This would be in line with Foundry’s stated mission, and would also make sense with the $5,600 sticker price too. That’s why I added this line at the end: “Still, with a carbon frame, top-of-the-line build, and $5,600 price tag, this “workhorse” cleans up pretty well too!” 🙂

Also, I didn’t talk much about the drivetrain build much (aside from the On Test review) for 2 reasons:
1) I did have issues with the XX rear derailleur (warrantiable defect on SRAM’s end) and replaced it with a SRAM X0 Type 2. The X0, IMO, is much more of an everyday workhorse than the XX and I absolutely love how it performs!
2) Foundry is changing the top-of-the-line build to Shimano XTR with a clutch-style rear derailleur. I don’t have too much experience with XTR, so I didn’t want to pass any judgement on its durability.

Going forward, the stock builds that will be available on the Broadaxe are SRAM X7, SRAM X9, and Shimano XTR.

If it was me actually putting down money for this bike, I’d personally probably purchase the X9 build and upgrade to X0 components whenever something breaks.

At $5,600, it sounds pretty high-end. Do they have a lesser-spec’ed model with a lower price?

For that price I could get 2 different bikes in my stable. Salsa El Mariachi and a “monster cross” bike. Besides these I would have enough left over to get a bike for the wife and one of the kids.

That being said, that is one sharp bike? Really like the lack of “bling” a bike is for riding, not a fashion statement.