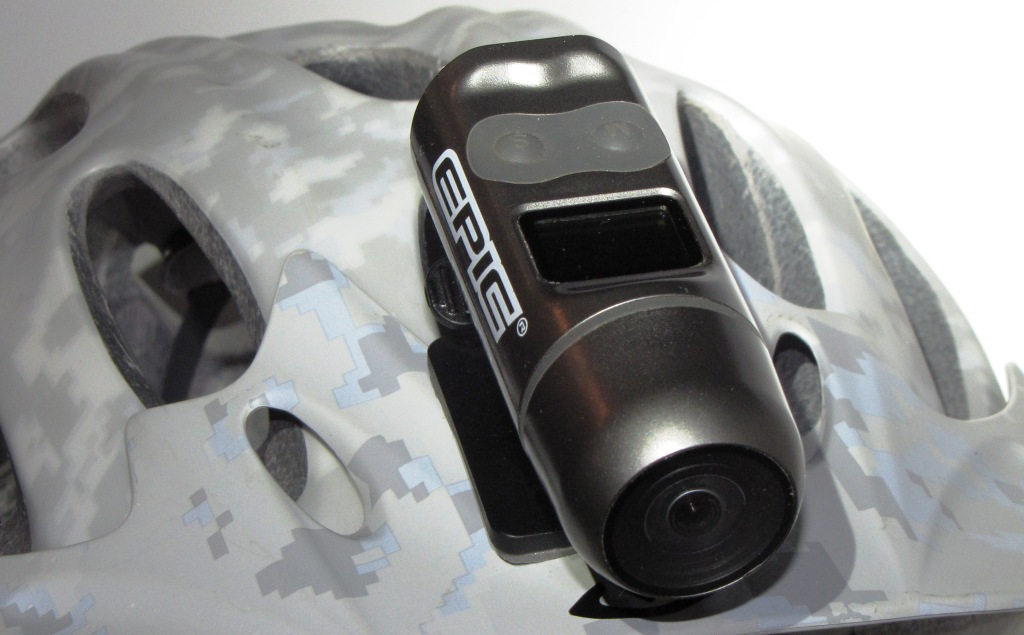 These days anyone can star in their own mountain bike video thanks to powerful and affordable digital video cameras. With a compact form factor and easy set up, helmet cams allow mountain bikers to give a first-person perspective of the trail.

The Epic Wide helmet camera (MSRP $209) features a 168degree viewing angle and is lightweight (2.5 oz) and small enough that it can fit almost anywhere on your bike or your person. Almost everything you need comes in the package, including batteries, 2GB SD card, 2 adhesive mounts, one swivel mount, a strap mount, a waterproof shell, and for an additional $19.99, a handlebar mount. You even get all the cables necessary for connecting the camera to your PC. That being said, the Epic Wide doesn’t include software for editing your movies so the choice of video editing software is up to you.

The Epic Wide Stealth Cam sports a two-button operation which, once you read the instructions, is fairly straightforward. Playing around with the camera before you head out is a good idea and should clarify any confusion with the instructions. This camera shoots video at 640×480 resolution, features a 2X digital zoom, and includes audio recording as well. At 30 frames per second, the Epic Wide captures decent footage, even in fast action (read crash). The Epic can also take photos in a burst sequence, allowing you to capture still images in three different resolutions. 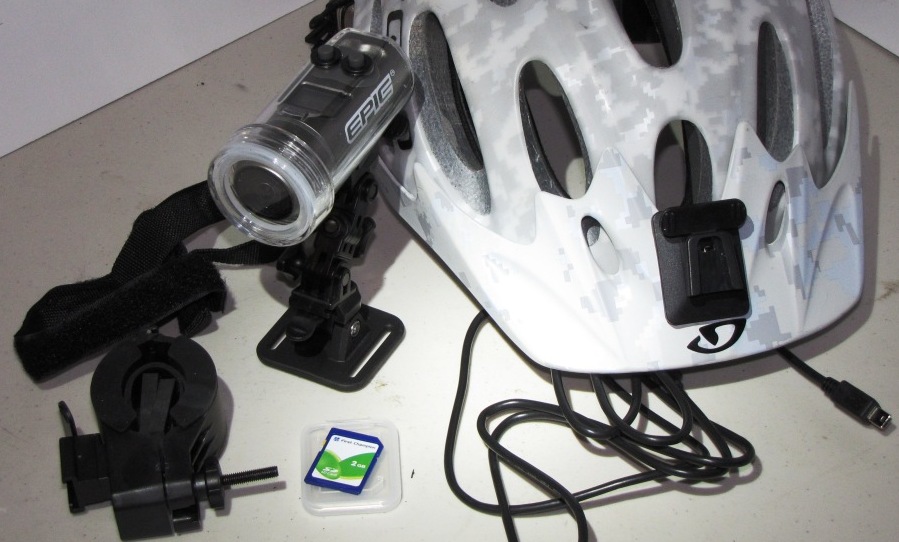 Getting the camera out of the box and onto the helmet took just a few minutes. It may take you a few moments to decide where to place the mounts (on your helmet or on the bike). With the variety of mounts you get, try a few on your helmet and maybe one on your bike. Don’t worry if you’re not happy with your initial choices; you can easily get yourself replacement double sided tape at a Lowe’s or Home Depot (I found the exact same double-sided tape in the tape isle near the painting accessories).

On the trails with the Epic I found that it worked well enough. Mounting it on the visor of my helmets (THE ONE, Giro Xen) I could honestly say that it was so light that once I turned on the camera I couldn’t even tell it was there. Turning it on and pressing record was easy enough and I didn’t have to look at the camera to get things rolling. It did take some time to get used to the other controls and I found myself referring to the manual frequently to remember the button sequence to get the Epic to shoot in different resolutions. After playing around with different settings I found that sticking with the standard 640×480 resolution worked best.

After using the Epic a few times and looking at the playback, I decided to keep the camera in the waterproof container because without the container the microphone picked up a bit of wind noise. In fact I ended drilling two 1/2 inch holes in the back of the container which was a decent balance of picking up ambient sound while minimizing wind noise. That being said, the audio quality still wasn’t that great.

The Epic’s overall video performance was decent but depended heavily on light conditions. As with many digital cameras, I found that in lower light levels it did not do to well; the picture came out a bit dark and needed to be brightened with editing software. On sunny days with some cloud cover the camera was fine and the picture came out clear when mounted on the helmet. Mounting the camera on my handlebars produced shaky video that gave me motion sickness on playback, so perhaps that’s not a great idea. Mounting the camera on the frame was still a touch shaky but not bad compared to the Blair Witch feeling you get with the handlebar mount.

The 168 degree lens tends to flatten out the picture on playback, taking a bit of the ohhh away from those drops. Nevertheless, you do get a lot in the screen at one time and the wide field of view eliminates the “tunnel vision” effect you might see with other cameras. Of course you can spice up your video in post production, adding music and clever editing to recreate the rush of bombing a slope.

The Epic Wide is incredibly durable. During testing, the camera survived without a scratch even after I cased a drop down really bad. According to my good friend who was taking pics at the time, he said it was the best, most perfect 720degree crash he has ever seen!

Here is that crash one more time. I didn’t tank it the second time (just in case you’re wondering).

If you take a look at the videos embedded here, the video quality basically speaks for itself. For the money the Epic is a decent camera and is one of the smaller units out there which is perfect for folks who want a compact camera. The Epic took some serious abuse and survived without a hint of damage which is a big plus in my book. The lack of editing software and the inability to adjust to lower lighting levels could be an issue for those who find themselves riding in lower lighting often (indoors, at dusk, etc.). Most video editing software can compensate for the lighting issues so all is not lost.

Epic also just released an HD version of this camera at Sea Otter this year. The HD camera has the same small body but an improved image sensor. Hopefully I can get you all the skinny on that as well.

A quick thanks to the folks at Epic Stealth Cams for the chance at testing out their video camera.

Good work – looks like a decent camera for most folks. I’m a particular fan of that brief glimpse of gloved hands immediately before impact on the fall. Good times!