Allow me to preach two conflicting sermons: 1 bike for many uses AND a bike for every task. First let’s have full disclosure: I work in the bike industry and I want all of you to buy bikes. Technology and innovation make your hot-shit full suspension rig obsolete in a season or two. Carbon fiber is delicate and I hear it explodes spontaneously if you taunt it. But there’s a less cynical reason to own more than one bike. You can reach your true potential without too many compromises. Do you want a bike that does one thing in a stellar fashion, or one that does a bunch of things ‘just OK’?

However, there are some models, some designs, some features that applied artfully to the final product create a beautifully capable and infinitely variable mount. Come on, I’ll show you around. 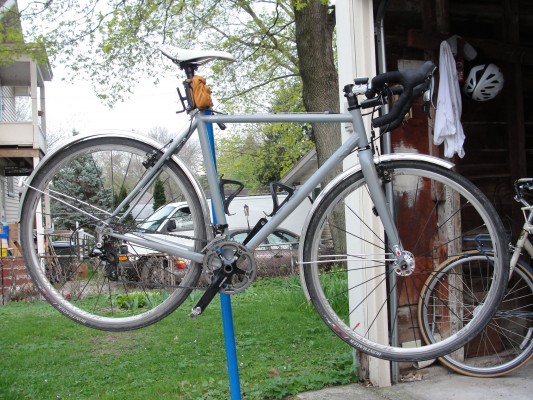 The first bike I purchased when I came to this new job in the bike industry was the 2011 Trek Gary Fisher Collection Presidio cyclocross model. The highlights that caught my attention were a butted 4130 chrome moly frame, sliding vertical dropouts for geared or single speed compatibility, stealthy fender mounts and clearance for big rubber. In my mind it could be my everything: cyclocross bike for races (I did a few last season), touring bike with fenders, commuter, and last but not least a Monstercross crusher. As far as I define it, ‘monstercross’ is a cyclocross bike with the biggest diameter tires you can wedge in there. This experiment proved that 700×44 (29×1.75″) tires fit with room to spare. I started with the configuration pictured above and started tinkering. 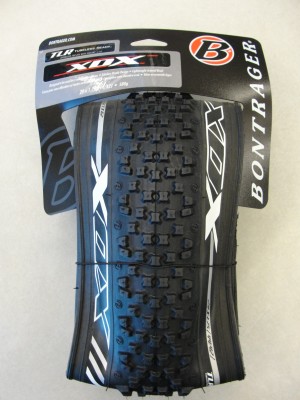 The Bontrager XDX tires (580g claimed weight, 548g measured) in 29×1.75 just happen to be tubeless compatible, oh my. Why not pick up some Stan’s rim strips for cyclocross wheels and some goo and make this beast lightweight, puncture resistant, and capable of low tire pressures that bring wolverine-like grip? Don’t mind if I do! Let’s get busy with the air compressor and heeeeeere we go. 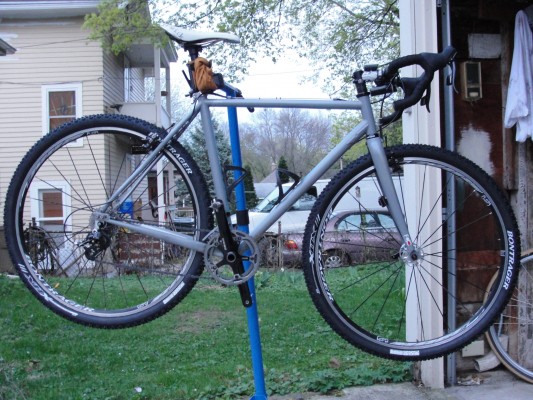 Thus shod I was ready for damn near any mixed-terrain challenge. This is what a drop bar bike should be, at least for those of us who like dirt in their diet. It’s plenty capable on the road with just a hint of drag from the knobs and wider profile cutting through the wind. But when the macadam disappears and the gravel, roots, rocks, and dirt arrive this is truly the right tool for the job.

I am lucky enough to live two blocks from a trail that cuts across the city insulated from auto traffic, joins a suburban commuter path, and feeds into the Military Ridge trail: 40 miles of mostly crushed limestone gravel that goes from the outskirts of Madison to Blue Mounds State Park. Along the way there are side trails to explore that include real-deal mountain bike single track near a local quarry and at Blue Mounds itself. Jump on the Monstercross, rip through the city and before you know it you’re attacking almost everything a mountain bike can with style and grace. On the way you may even bear witness to something as stupefying and life affirming as a tree that grows bowling ball bags: 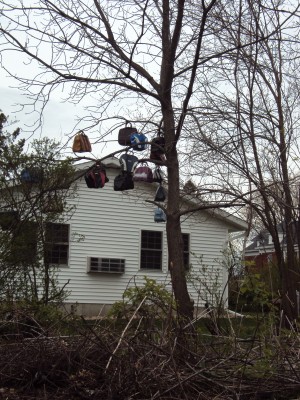 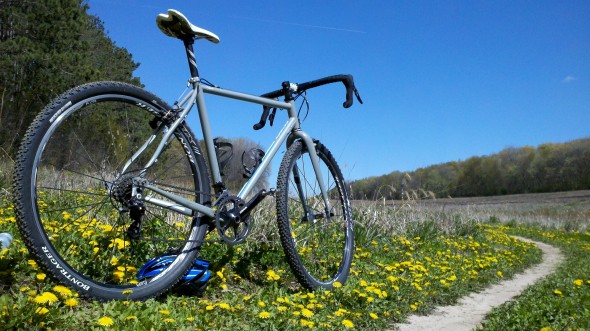 Like a rigid mountain bike, the monstercross relies on the large volume tires for suspension in addition to grip. The bigger the tire, the more supple the casing and the better is it for all-day comfort and trail-shredding tenacity. This here bike has it in spades. And it is DYING to be converted to single speed once I am ready to drop dimes for a single speed crankset, chain, and conversion kit for a single cog. Maybe in time for this year’s cross season? Stay tuned. In the meantime you can find me on the road, on the path, on the trail and just about any other place fit for getting rad. 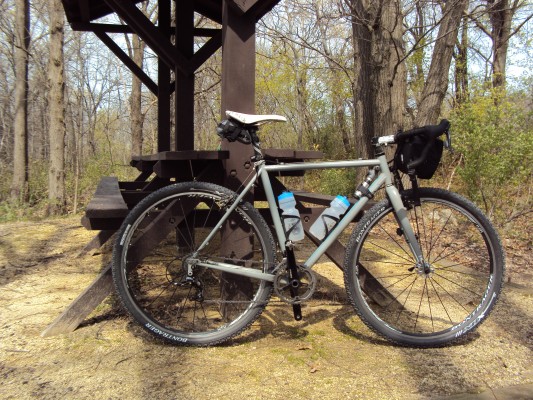 Good looking bike – I’m impressed you can get such wide tires on there! I bet this bike hauls ass on smooth singletrack.

Great write up! I know several people that swear by monstercross bikes.

That looks like an awesome bike. I very much want a disc braked ‘road’ bike that’ll fit fenders and wide-ish tires. Something I could go cruise paved and gravel roads in the rain, or after a rain, when it’s too wet to ride the trails.

Same tires I use on my Vaya! Perfect gravel setup imo. Too bad they’re out of production – I have a stash of 3 and once they’re gone I’ll try something new. Probably Vee Rubber X-C-X 1.75’s or one of their other models.

Digging the “after” photo with the new tires!

Nice write. I have to agree that a cx frame makes a nice platform to build into what I call an “all terrain bike”. I despise road riding but having a bike that is light but durable with low rolling resistance increases my ride opportunities. Now I can ride from the shop on street or chat, hopping curbs and poaching alleys along the way and meet my buddies at the single track. The ride is not as cush, but there is more riding to be had. Keep on Monstercrossing!

Wanna give that rig a real shakedown? Come out to Three Peaks USA in Banner Elk, NC Sept 23, or one of the other American UltraCross Championship Series events.
http://www.ThreePeaksUSA.com
http://www.UltraCross.com

Very nice, I recently built up a Singular Peregrine that I am absolutely in love with. I really feel like I could take it anywhere, AND it has disc brakes.

Awesome overhaul. Would love to feel that thing shred down smooth single track or a nice long rail trail like the Great Allegheny Passage here on the east coast.