After my fantastic experience reviewing the Diamondback Sortie 3 29er this summer, I made it a top priority to stop by the Diamondback booth at Interbike. So, Diamondback was my first stop at 9am, right after the expo doors opened!

All of the popular Diamondback models are returning this year, including the Sortie, the Mission, the Mason Hardtail, and others.

This year, the Sortie comes with a new pivot point for the shock. Instead of having the pivot point welded onto the downtube, it actually runs straight through the downtube, which saves weight and makes for a stiffer rear end.

The top-end Sortie Black model is still an aluminum frame, but comes with a SRAM XX1 build, as well as a little more tire clearance and more rear end stiffness thanks to a redesigned strut. One of my biggest complaints with the 2013 model (granted, it wasn’t a very big one) was the tight rear tire clearance, and Diamondback appears to have alleviated that issue. Kudos.

Last year the big story was the all-mountain Mason hardtail 29er, and it has been received to great acclaim and great sales. Following up on the hardtail’s success, Diamondback is now producing two full-suspension Mason models. These FS rigs run 29-inch wheels, 140mm of front and rear travel, and the base model costs only $3,000. 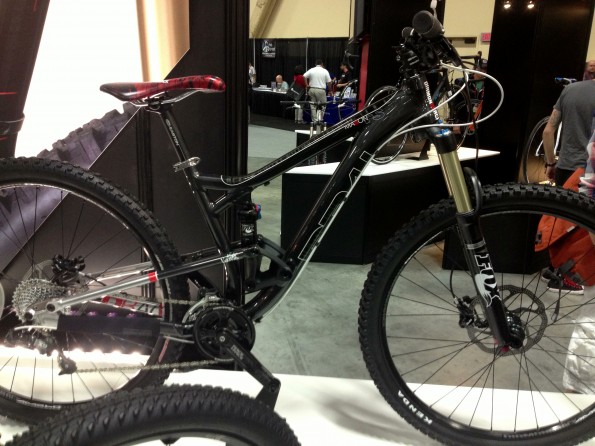