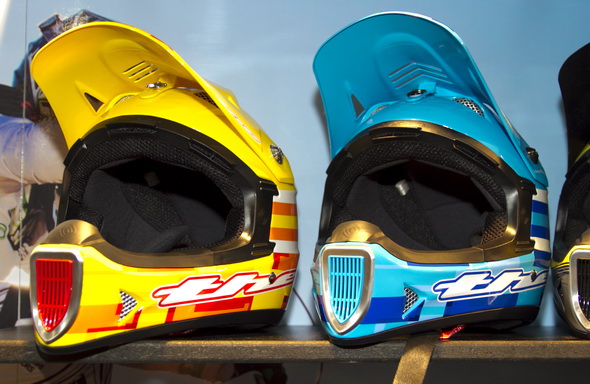 There were plenty of cool helmets and other gear to see on the Interbike showroom floor. Swinging by t.h.e., Bell, Five Ten, Dakine, Osprey, and a few others, I had a chance to see what’s new and exciting for 2013.

t.h.e. has revamped their entire line up this year and introduced quite a few new lids. The Thirty3, pictured above, is pretty badass. This unit has nearly all the bells and whistles you can think of concerning certifications, safety, and innovations. Firstly, the name, as it implies, gets its styling cues from a 33 Ford: 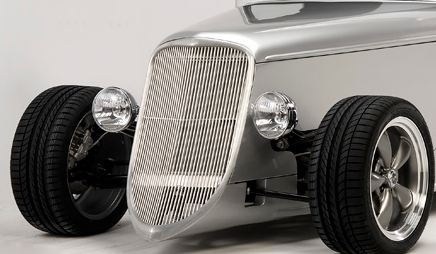 See the similarities? It’s definitely a like it or hate it style choice.

As far as protection, the new Thirty3 has exceeded DOT, ASTM 1956, CPSC, EN 1078, and AZ/NZ 2063 specifications. I have to admit, that’s pretty impressive considering it comes in at about 1000 grams. According to t.h.e., this is the first bicycle-specific helmet to obtain DOT approval. The Thirty3 comes in carbon as well as composite shell constructions. Both have the same approvals, there’s just a difference in weight. The big deal here is that the Thirty3 is t.h.e.’s first helmet with provisions for the Eject helmet removal system (not included in the $399 price tag), and the snap-in cheek pads. 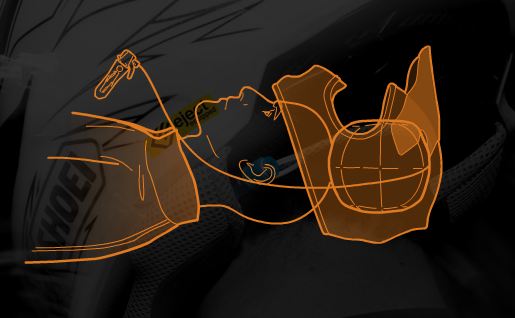 Style and function are both part and parcel with the Thirty3; the shape of the helmet is to the retention of the helmet strap as well as the 18 vents to better manage heat dissipation.

The photo below offers a glimpse of what we can expect to see from t.h.e. in the lid department, with four carbon and four composite color schemes on tap for the Thirty3, as well as four color schemes for the budget-minded Point5 helmet (MSRP $99). 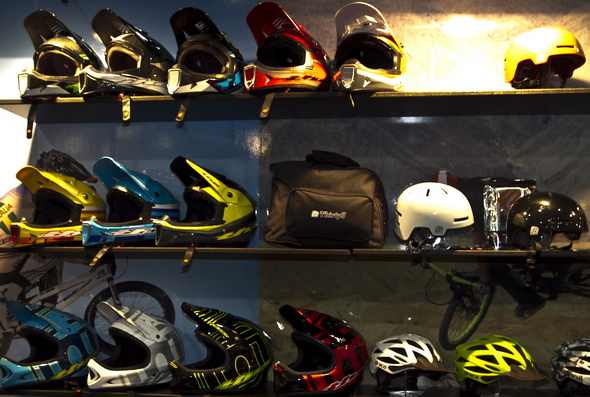 t.h.e. did not stop with the Thirty3: they also created a new hybrid jumper lid called the Postal Stamp. I say hybrid because this is the first design that also incorporates a rear retention system in an in-mold design. With both CPSC and EN 1078 certs, these have been tested safe. 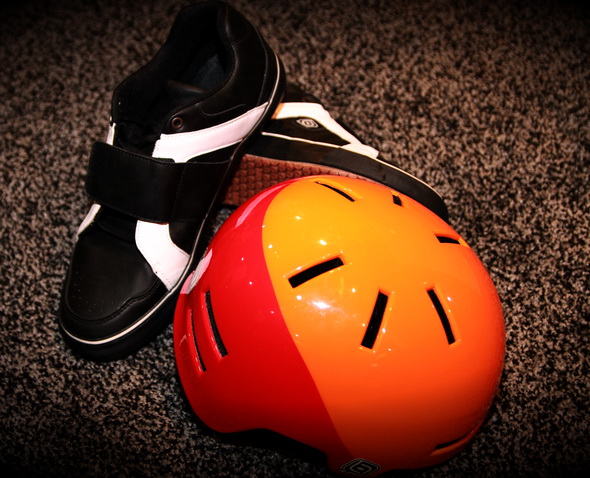 Add to that a cool new SPD shoe called the Hermes with full synthetic leather uppers, the sole from the DZR, a deep heel cup, natural glass-filled shank, and natural gum rubber outsole. The Hermes makes for a cool dual-duty shoe.

t.h.e. has also revamped their technical gear with additions to the Cosmo line. A new jersey and glove now complete the look. 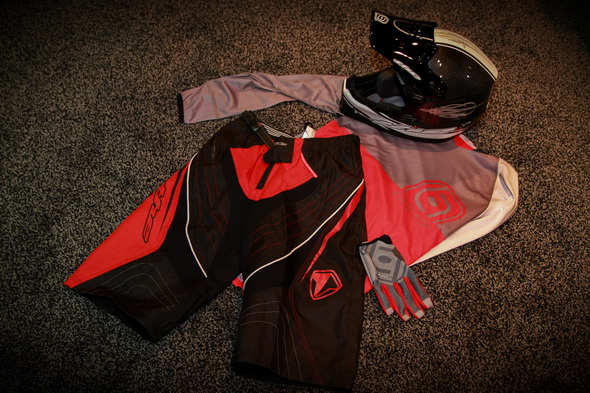 Dakine is no stranger to the action sports industry. Having been around for many years, Dakine keeps coming up with new equipment with creative designs and styles, whether it is a hydration pack, short, or glove. I was able to spend some time with Serene Pelletier and our very own mudhunny at Interbike, and we had a blast going over what looks to be a promising year in gear. 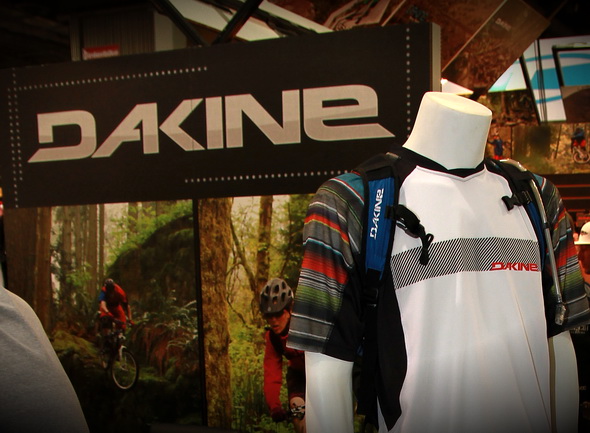 With a vast array of improvements to the shorts and tops, as well as a style refresh, both mudhunny and I were pretty stoked on the changes.

Not everyone wants to look like a DH racer while riding. For next year, a casual stripe look is on the horizon. This isn’t to say that single colors or racing-inspired graphics are gone, but there is definitely more variety in the lineup. 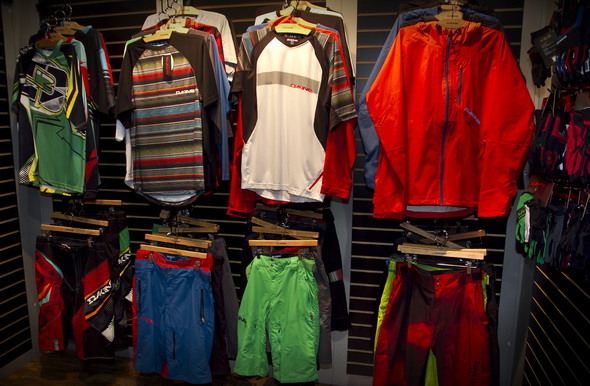 Not too long ago we received a care package from Dakine with a bunch of cool gear which we’ll be reviewing soon–so stay tuned! Among the items that we will write about are two very important pieces of gear that I used at Interbike. To get to and from from Vegas I used the Overhead 42L travel bag, and to carry all my camera gear I employed the Quest camera bag. 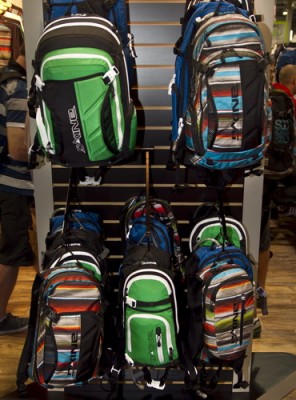 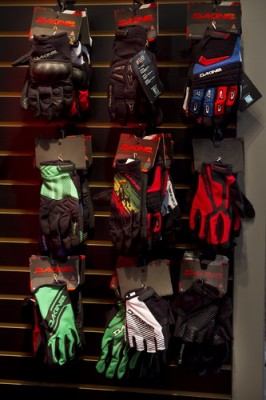 The packs and gloves also received makeovers with new patterns to match the clothing.

Bell’s big deal is the new Full-9 and Super helmets. 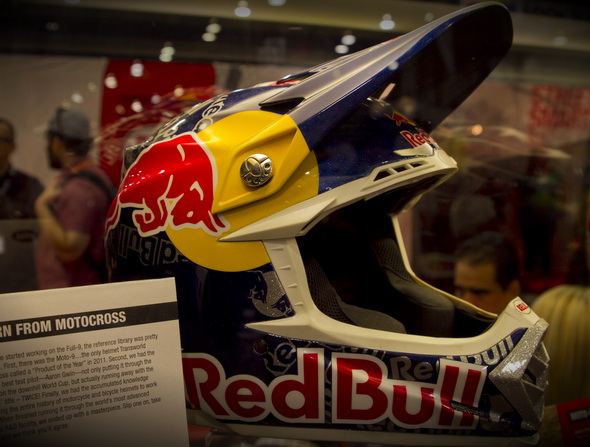 The new Full-9 is the mountain bike version of the Moto-9. Many people who ride moto consider the Moto-9 to be one of the top-dog helmets, and the new Full-9 looks like it is following in the Moto’s footsteps. Constructed from full carbon, this lid incorporates a ton of features. The most important features are all the certifications that the helmet has passed: ASTM (Downhill) F-1952 and F-2032, CPSC and CE EN 1078 standards are covered.

Add to that the Eject system that is filtering in to DH, and this is one uber-safe helmet. For ease of removal, the cheek pads are held in place magnetically, allowing a first response team to gently remove the helmet. Inside the helmet, a hollowed out section and path for an inflation tube can clearly be seen once the liner has been removed. All of this makes for a safer lid. 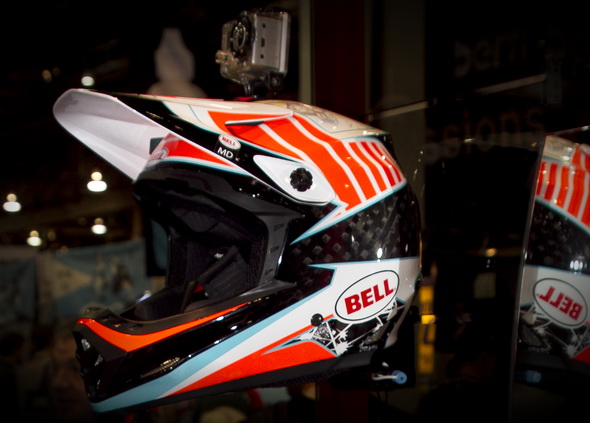 Not everything in life is about safety. The Full-9 also gets some cool features, like an integrated camera mount (the first I’ve seen). Nothing bugs me more than needing to use two-sided tape to stick on a camera mount. Basically, Bell designed a shock absorbing pad and vent plug that allows either your GoPro or your Contour to be held in place.

Bell also included Soundtrax speaker pockets for those who need their tunes while they ride. Heat is managed with 10 ports and 3 over-the-brow ventilation ports. 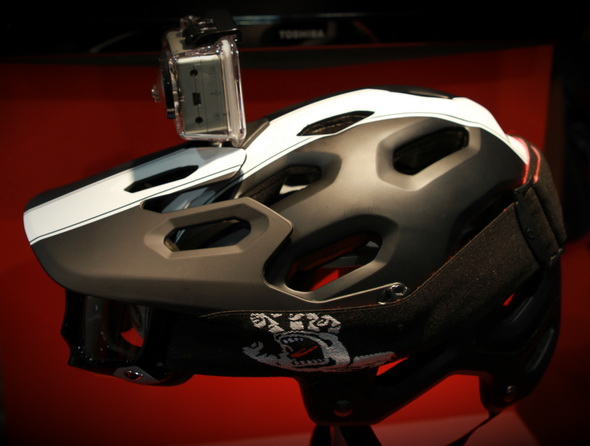 The new Super helmet really is super. It takes modern styling cues from many of the successful brands and blends them, with great execution.

With a nice, close-to-the-head look, the Super takes it further with the ability to run with or without a visor, and with goggles or sunglasses. The Super really blurs the line between XC (due to its light weight of 390 grams) and Freeride: perfect for the growing enduro market, where people are looking for light weight as well as ruggedness. 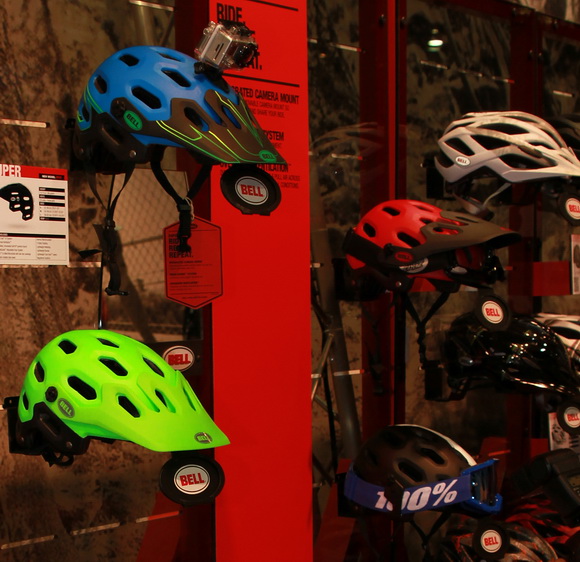 Enduro riders are shredding faster and faster and finding that sunglasses are just not cutting it, so a helmet that can work with goggles was in order. In fact, the Super is designed around a goggle, with an easy-to-remove visor and a retention system to guide the goggle (if you want to use one). The flat back of the Super allows for most straps to easily wrap around.

Just like the Full-9, the Super gets an integrated camera mount that fits nicely into the front vent. Like the Full, the integrated mount will come off when hit hard enough (thanks to the simple velcro strap inside the vent that supports it). 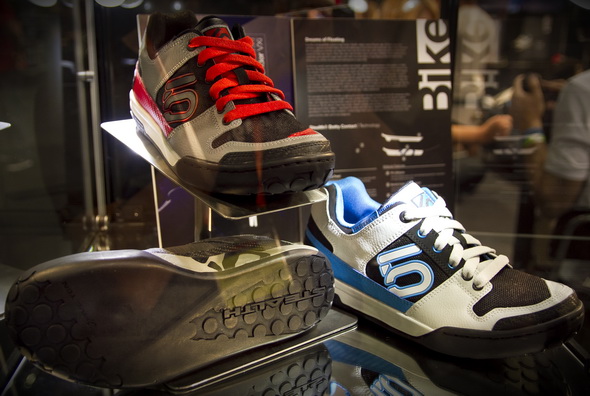 Five Ten was at the show displaying the latest 2013 styles. The Freeride VXI shoe pictured above offered an interesting look at the innovative side of Five Ten. The mid sole is made mostly of slick SI stealth rubber (that’s super-tacky stuff). The thinking behind this move is that the pins of the pedal embed into the rubber “locking” in the shoe, elevating the amount of traction when pedaling. The same slick area also will grip rocks better. The uppers now feature abrasion-resistant, breathable materials.

Not only did Five Ten introduce some new shoes, but they updated some existing models. Greg wrote a review of the Maltese Falcon fairly recently, and the new shoes are updated with the same breathable, abrasion-resistant mesh as the VX1 in spots. The location of the SPD cleat is also set back a touch more for a balanced foot. I hope to get Greg in a new set to compare the shoes for an informed review! 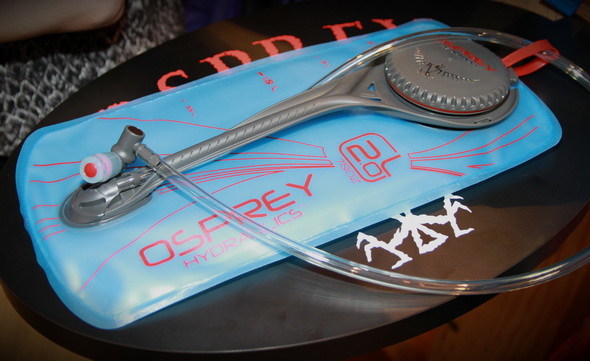 Osprey showed up with some improvements throughout their lineup. The highlight is the new bladder that comes in all the latest packs. This new reservoir rides wider and flatter on the back, with a new hose (now the same diameter as everyone else’s) that’s compatible with existing accessories. 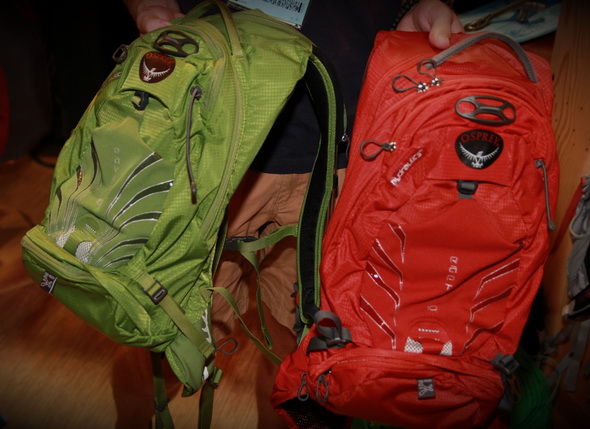 There are also a few updates to the packs, such as the ones above, as well as some all-new packs. One of the updates is a continuous zipper that allows painless access to the bladder and hose. A tool pouch is making its way into many more packs as well. 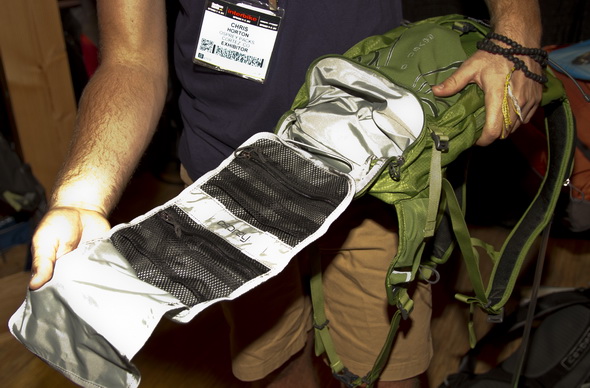 Look for long-term reviews on some of the new gear from Osprey and other manufacturers soon!