Last year we slung a veritable well of virtual ink at the emergence of the 650b/27.5in wheel size. For all of our coverage to date on the ‘tweener wheels, check out our 650b (r)Evolution channel.

At first, when I showed up to Interbike this year, I thought there would be some big 650b news to share. Well, to be perfectly honest, the news isn’t who’s doing 650b, it’s who’s not… because almost everyone has fully embraced the 27.5in wheel size! The only notable exceptions are Specialized and Niner. Niner hasn’t produced a 27.5-er for obvious reasons, and with Specialized… it might just be a matter of time.

Consequently, I can’t even begin to write about all of the new 27.5 bikes this year, as there are so many of them it would make your head spin! However, what is interesting, is that some companies seem to be abandoning the 26in wheel size altogether.

This trend that is just now beginning to emerge, and it might not go anywhere, as there are plenty of wheel, tire, and bike companies that are producing a full complement of products in all three wheel sizes. But even with those companies who are supporting all three, almost all of the 26in products are simple carryovers from last year. Almost all of the new-and-improved products are 27.5 or 29.

Syd primarily noted the slow, but visible, disappearance of the 26er. He noted that Marin and Norco “are dropping 26 on nearly everything, except bikes under $590.” While most wheel and tire companies are running a full three sizes, Syd noticed that “Race Face and Reynolds are exclusively 27.5 and 29.”

Sure, there are still a few slow-adopters out there. Aside from the companies mentioned above, Felt still hasn’t embraced 27.5 like some of the other companies. However, they’ve produced what appears to be a token entry-level 27.5er, essentially just to show that 27.5 is on their mind and that they’ll have something more coming down the road.

Over a year ago, I postulated that wheel size would eventually filter out by application. Here’s how I broke it down:

So far, as I expected, most 27.5in bikes are falling into the all-mountain/enduro category. I expected, even then, for there to be some outliers. Still, this year at Interbike, the number of outliers was a little surprising. Jeff observed, “all the wheel companies I spoke with seemed to be offering wheels in all sizes except at the extreme ends (no 29 for DH, no 26 for XC).”

Personally, I found the number of hardtail 650b bikes to be the most surprising. I already mentioned Felt, but there are many other brands offering this strange breed of mountain bike. Foundry, for one, recently announced their brand-new Tomahawk. With shorter, beefier chainstays, this rig is stiffer and more maneuverable than the Broadaxe 29er. 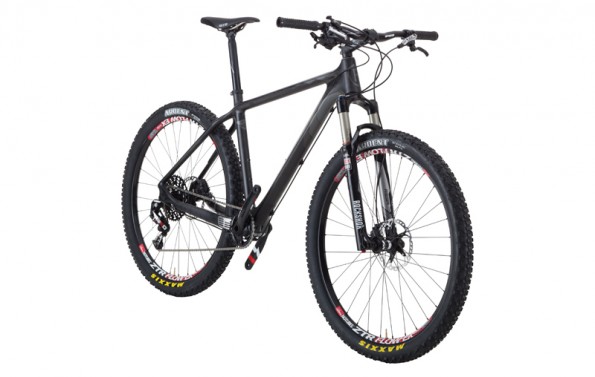 While KHS stirred the pot with their 650b downhill prototype last year, Intense was actually first-to-market with a production 27.5 downhill rig. This actually shouldn’t be too surprising, as Intense has helped lead the 650b charge in recent years and is traditionally a gravity-oriented brand. 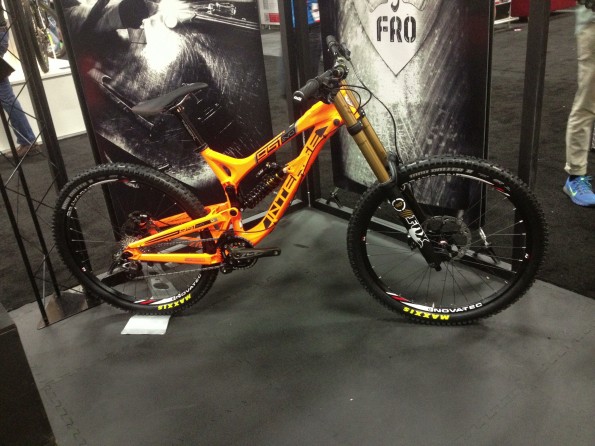 The Name Debate Isn’t Over

While I personally had hoped that the industry would settle on a name for the ‘tweener wheel size by the time Interbike 2013 rolled around, the debate is still far from over. Right now, it seems like most brands are playing it safe, and using both 27.5 and 650b. This makes for some pretty entertaining bike and wheel labels: 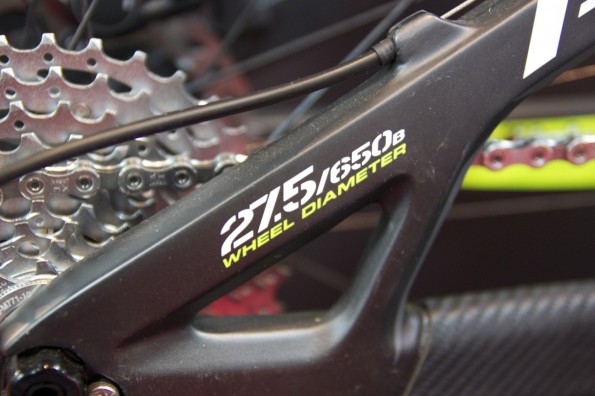 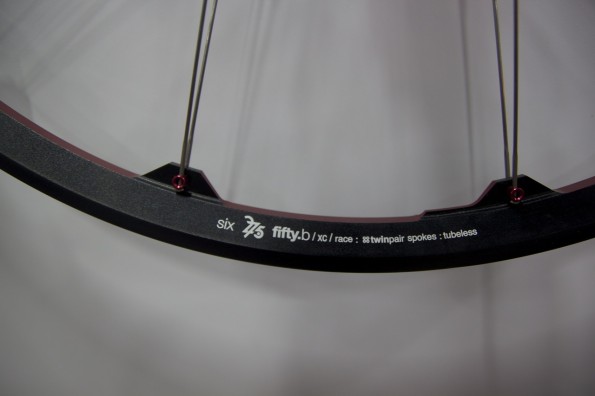 I’ve noticed that “27.5” has continued to gain more traction. In my estimation, while “twenty-seven-fiver” doesn’t roll off the tongue nearly as easily as “twenty-sixer,” “niner,” or even “six-fifty-b,” “27.5” might eventually come out ahead simply because it makes more sense when lined up next to “26” and “29.” Still, this debate is far from settled, so stay tuned to see what eventually shakes out.

I haven’t mentioned much in the way of 29ers in this article, but based on overall trends, the 29er isn’t going anywhere: there were plenty of new full-sus (as well as hardtail) 29ers on the Mandalay Bay showroom floor.

In fact, some companies are running 29in and 27.5in wheel sizes in many of the same bike models. Mostly these are larger companies that have the money to do so, but it’s still an interesting phenomenon. Take a look at Trek’s Remedy lineup: 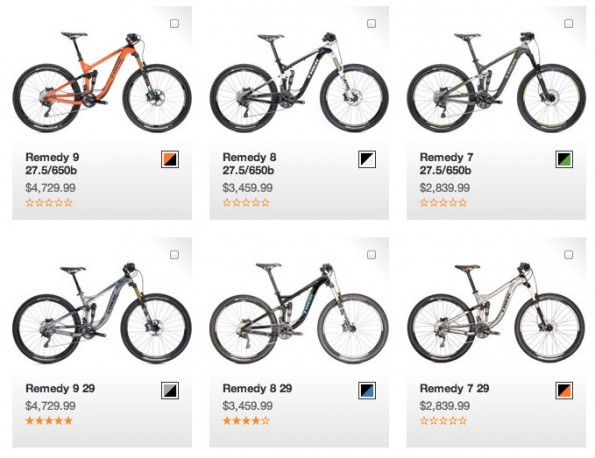 While they currently have six 27.5/650b Remedy models compared to three 29er models, it doesn’t look like Trek has decided which way this part of the market will go, so they’re trying to split the difference and cover all of their bases.

Has the 26er disappeared already? Heck no. Will it ever disappear completely? Probably not, because some people will always want to be different. But if current trends continue, coming by 26in bikes, wheels, and tires might be more and more difficult as the years roll on.

As always, we’ll keep our eye on the market, and see what actually ends up happening, and what doesn’t!

Your Turn: Do you think the 26er will disappear?

Perhaps this article might be better titled “The Disapperance of the 26er for everything except freeride, dirt jump, and downhill” … but that doesn’t quite have the same ring to it.

Good summary. I think the example of Trek offering 29 and 27.5 inch wheels on some models is interesting (I also noticed companies doing the same with 26 and 27.5). It’s almost as if this is one big product marketing experiment and they’re trying to see where people bite on wheel size decisions. Not that there’s anything wrong with that–in many ways it’s a subjective call to see which wheel size works with geometry, travel, etc.

We are far from settled on what to call this tweener wheel size. Joe Breeze calls it “twenty seven and a half” which is a mouthful. I like 650b for this reason.

^I think you’re right, Trek and Giant both are playing the field to see what sizes people like most. Speaking of Giant, they only have 4 26″ MTBs for 2014. Three high end gravity oriented bikes and one low end model.

Re: Giant: wow, that’s exactly what I’m talking about. Crazy.

I just posted my argument on the forum. Great summary Gregg thanks. The bike companies can put them out but the consumer will decide. This consumer…that would be me… would buy a 27.5 over a 29’er if that was my only choice because I do like the smaller wheels but I still don’t think based on the test rides I have taken that there is enough WOW factor for me to justify spending the bucks to “upgrade” to that wheel size. I know people that were happy with their high end 26 inch bikes and tested a 29’er and said, “gotta have it.” I don’t think that is going to happen but of course I may be wrong. I think there will be excess inventory and Jeff can buy me my bike…See forum contest I suggested! You guys did a great job in coverage out there thanks as usual!

Thanks Matt, our pleasure!

I don’t see buying a new bike just because it has the currently trendy wheel size. My 5 Spot will be perfectly useable for the foreseeable future, way better than the rider for sure.
Eventually I may end up building up another bike from a used frame/parts, like all my bike builds, and then it may be a case of going to the different size, but for me, now, I don’t see the need to make the jump.
Of course, by then I’ll be so ancient that I’ll need an electric motor and three wheels 🙂

Yeah, I don’t see everyone dropping their current rig just to get on something new and flashy, but when the time DOES come to upgrade, the question is, what will be available? And especially by the time a lot of folks such as you and me who have been riding and loving 26ers for years finally need to buy a new bike, I just don’t know how many 26ers will still be available…

I can’t say I’m too happy with the decline of 26″ bikes. There will be much less choice when buying a new bike. I guess 27.5″ is okay, but I definitely don’t want a 29er.

Like a lot of people, I demo’d a 29 and couldn’t wait to get home to my 26. For the way I ride and my size, I like the 26….I feel like I am “one” with the bike and that’s kind of important to me when I’m flying off stuff, climbing ridges and weaving between trees at decent speeds. I went to Old Town Bicycle (in Tacoma, WA) to buy a new Stumpjumper last year. They didn’t have one single 26er in stock…..in ANYTHING. The staff was nice but said the owner only wanted to stock 29ers. Stupid. I went to Center Cycle in Renton and got an awesome SJ for a great price. I liked it so much that I went back two weeks later and bought another bike from them. Glad there are bike shops out there who think for themselves and don’t immerse themselves in a new trend….nothing wrong with a 29 if it suits you, in fact, it’s a great option for a lot of people – just not me.

Tried 27.5 for enduro, disliked it completely, will stick to 26 inch size, way better and faster to carve through the tight stuff.