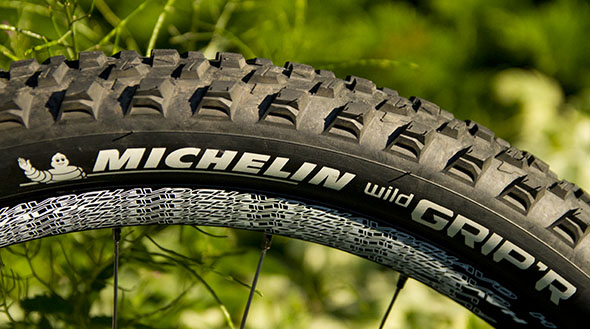 Michelin is pushing the boundaries with its new Wild series of tire rubber, so I had to test it out personally.

For this review, I opted for the 26×2.35in Wild Grip’R 2 Advanced tubeless-ready reinforced tires. Tire weights come in at +/- 950 grams for the double-reinforced 2.35-inch enduro version which I am reviewing. 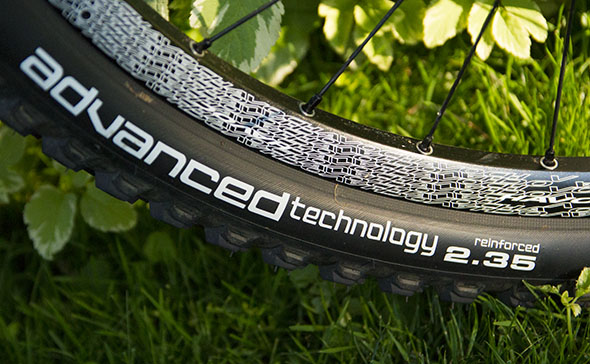 The reinforced version uses a super soft 55 durometer rubber compound in the center and sides with a 30tpi casing underneath.

The tread pattern was redesigned with stepped blocks and rearranged block locations to provide better mud shedding characteristics. Unlike some tires which have mostly solid blocks, the Wild Grip’R uses staged blocks with diagonal sides, which change the deflection characteristics of the knobs. Also, the Grip’R Advanced features a double row of braking / straight line knobs, followed by an alternating patterned intermediate knob. The tread finishes off with an aggressive side row for all-out cornering.

Installation on a set of Easton Havoc UST rims was a snap. With the use of only one tire lever and soapy water, I had both tires mounted with Stan’s in less than 10 minutes. I didn’t even need an air compressor. Using my trusty Topeak Joeblow Mountain Pump, I had the tires over the safety ridges and snapped in place in less than 10 strokes of the pump.

I had high expectations for these tires out of the box. Right now, I currently have a love affair going with a different tire brand, so if the Michelin’s wanted some of my affection, they were going to have to earn it!

Lately in Ontario, we have had a mix of sun followed by a lot of rain. When I mean a lot of rain, I am talking 50mm or more at a time. In order to get a good test on the Michelin Wild Grip’R, I headed to Blue Mountain Resort. Unfortunately for Blue, most of their terrain is clay based, so if there’s any measure of rain, runs start to get shut down. 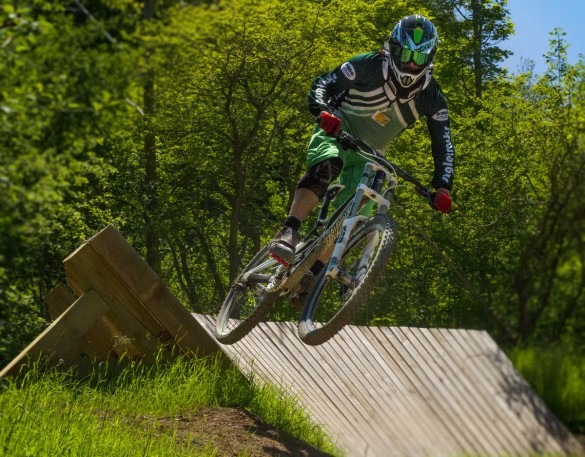 Testing conditions were mostly semi-soft to soft ground with patches of rocks and, of course, lots of roots. There were a few areas of what I can best describe as freshly-tilled earth, which really sapped speed.

The first couple of runs I was feeling sheepish; I just didn’t hit the point where the tire falls away from you as it looses traction. I had to adjust by pedaling harder in between turns to get up some speed (and nerves) to push the tires harder in the corners. Having talked with a few of my good friends about the conditions and how they felt on the mountain, I was expecting a lot of side slip on the steeper sections of the trails or over the roots. The funny thing was… it rarely happened. I was very impressed with the tracking ability of these tires.

I found that some of my good friends who usually pull ahead of me by bike lengths, didn’t. Bonus for me! Seriously, I think I have a winner of a tire here, and feel very hesitant to write about it. Heck, once this article gets published, my advantage is gone!

In the corners, the tires had a firm grip on the terrain: traction was far above my expectations. During braking and even pedaling, there was virtually no hint of slippage. The lack of slippage allowed for later braking and spirited sprinting out of the saddle over roots and softer soils than I might have attempted with a different tire.

With all this incredible traction, there has to be a compromise. If there’s any negative comment I can make about this tire, it’s that I noticed a very slight increase in rolling resistance. Also, I did notice a bit more vibration in the tires due to the open design of the tread pattern.

In one instance I did unseat the tire, but it was totally my fault. Looking at the photos just before I touched down, I was nearly perpendicular to the ground. Once my rear wheel did hit, it came right off the rim with a big bang. Yup, that run was ruined and yes, I was mad at myself, but once I got off the hill, I reseated the tire, pumped it back up again, and all was good. 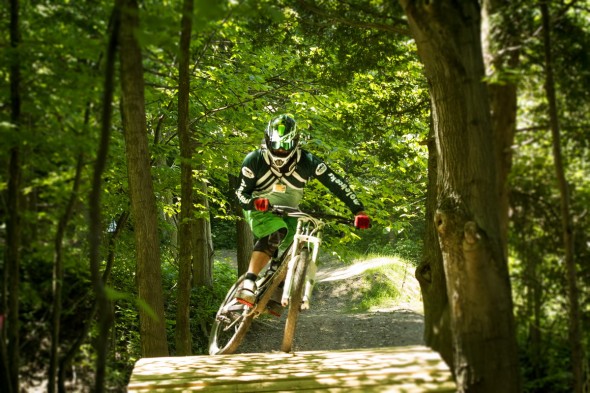 As far as durability is concerned I still see straight edges on the corners and there aren’t any knobs torn off. I think a visit to Mountain Creek is in order to really check the durability of these tires!

All in all, I have had no issues so far on the Wild Grip’R Advanced tires. The 26×2.35in versions I have are a definite improvement over the older models from Michelin. If you’re riding in a mixed bag of terrain, give these tires a hard look.

Many thanks to Michelin for sending the Wild Grip’R tires over for review!

Gear
The How and Why of Building Full Suspension Mountain Bikes...
Gear
Faserwerk Baslerstab Integrated MTB Cockpit Aims to Drop All the...
Gear
Hip Packs and Hydration Packs for Any Kind of Ride
Gear
Which Mountain Bike Technology is the Biggest Waste of Money?
Subscribe
Login
Please login to comment
3 Comments
Most Voted
Newest Oldest
Inline Feedbacks
View all comments

Did you find these to be fatter than the nominal width would imply like I did with the 2.25 Wild Race’rs?

Do you think these give the Hans Dampf a run for their money?

Hard to say, I haven’t ridden Dampf’s so I can’t compare..They are a pretty true to size but the tread does stick out a bit more than the carcass of the tire.