Located less than 100 miles from downtown Los Angeles, Big Bear Lake and Snow Summit Mountain Resort are well within day-trip distance of about 18 million people, thousands of which are passionate mountain bikers. Those lucky dogs! 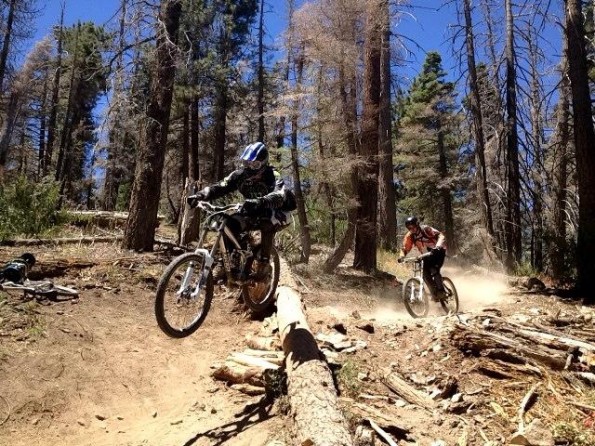 Back in the 1990’s, the heyday of downhill mountain bike racing, Big Bear Lake was the place to be. Many of the professional downhillers from the United States lived, practiced, and raced in Big Bear, and the mountain bike scene helped propel the summer economy. Anyone who was anyone raced in Big Bear, and it hosted several venerable World Cup races over the years. It was like this as recently as 2005–and then everything changed. 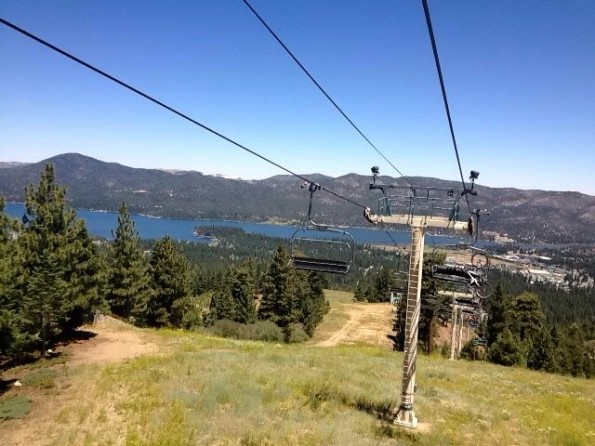 View of Big Bear Lake from the chair lift.

There’s a lot of hearsay and rumors surrounding the cause of the demise of Big Bear as a mountain bike destination, but after talking to a lift operator who had been around since the mid-90’s, we got the inside line on what actually happened.

From what we heard, it was the perfect storm of unfortunate circumstances. One of the main triggers was a man who was paralyzed while competing in a downhill race at Snow Summit(the resort that serves as the focal point for downhill mountain biking in the area). The man brought an eight-figure lawsuit for damages against Team Big Bear, one of the race organizers. He quickly lost the law suit, and thankfully decided to stop pursuing the litigation, but if he had continued he would have had to pursue NORBA, and then Snow Summit.

Since Snow Summit is privately owned, the owner decided that the money made running the lifts in the summer for mountain bikes just wasn’t good enough to warrant the liability coverage he would need to carry if another sue-crazy moron ever decided to come after the resort. 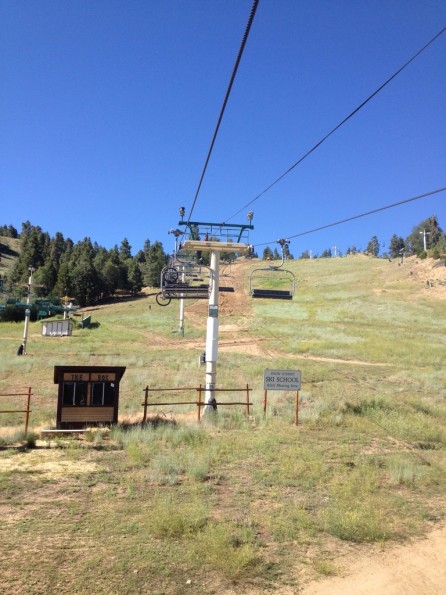 Following my bike up the chair lift.

At just about the same time, the US Forest Service came after Snow Summit too. While not pushing a lawsuit, they asserted that the traffic from the downhill mountain bikes was causing severe damage to the trails in the surrounding San Bernardino National Forest. Despite the fact that all the trails are multi-use and are open to hikers, equestrians, and motorcycles as well as mountain bikes, the downhillers bore the blame for the supposed damage.In addition, there was a significant rash of illegal mountain bike trail building taking place in the National Forest, which didn’t endear mountain bikers to the USFS at all.

After everything was said and done, mountain bikes weren’t banned from the chairlifts, but Snow Summit banned mountain bikers from riding anywhere on the resort property. They were, however, allowed to ride the lift up to the top and then exit the resort property and descend some of the trails that lie outside the resort boundary in the National Forest. Also, there were severe limitations put on the size and types of bikes allowed on the lift. All bikes loaded could only have one crown, couldn’t have more than about 5 inches of suspension, had to have 3 chain rings, and had to come in under a very severe weight limit.

While the lifty we chatted with seemed to want to push the blame for the demise of mountain bike racing and tourism in the area onto the USFS, the National Forest is still the only place where bike-riding patrons of the Sky Chair can descend the mountain. Snow Summit property is strictly off limits to bikes. 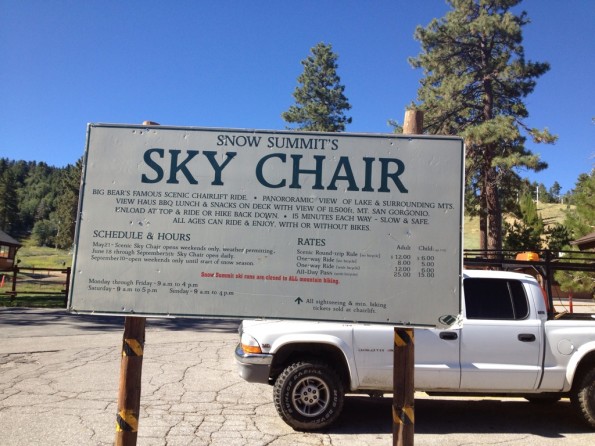 Current rates for the Sky Chair.

However, in the past couple of years, things have slowly been changing. The restrictions on the bikes allowed on the lift have been reduced significantly. According to the website:

Even since these guidelines were published, the restrictions have been loosened further. Most of the bikes I saw on the lift had only one chain ring, many of them had more than 7.5 inches of travel, and the tire size has been upped to 2.7 inches. 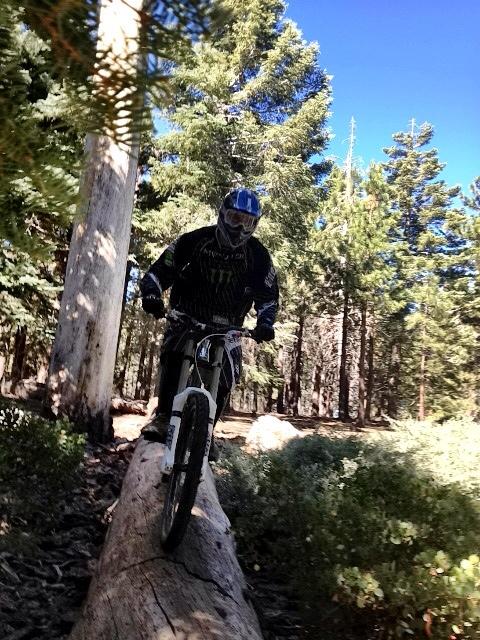 However, the one measurement that the resort has remained firm on is the 38 pound weight limit, which is pretty light for a downhill bike. According to the friendly lifties, the main reason for the continuation of the weight limit is an OSHA policy. Because the chairs aren’t equipped with roll-on bike loading, lift operators must lift bikes and hang them off of a peg, and apparently some regulation keeps the weight of the repetitious loading from surpassing 38 pounds.

Along with the loosening of the bike restrictions, IMBA Trail Solutions has been contracted to build a cross-country singletrack trail dubbed the “Skyline Trail” along the top of the ridge line above Snow Summit and Big Bear Lake. Rumor has it that Trail Solutions has also been recruited to consult on the possibility of constructing a new mountain bike trail on the face of the mountain on Snow Summit’s property. If such a trail ever comes to pass, Snow Summit and Big Bear Lake in general will be headed back on the path to the downhill glory days of yore!

Since there are no purpose-built jump/flow lines on the face of the mountain like you can find at places such as Mammoth, Winter Park, and Whistler, the downhill riding at Snow Summit takes place on highly technical singletrack trails in the nearby National Forest. The lines range from steep with rocky/loose tread to steeper and rockier with bigger baby heads and looser sand! Granted, the Little Saigon trail is lusher and loamier and feels like you’ve been teleported straight out of arid So Cal and across the ocean to the jungles of Vietnam. 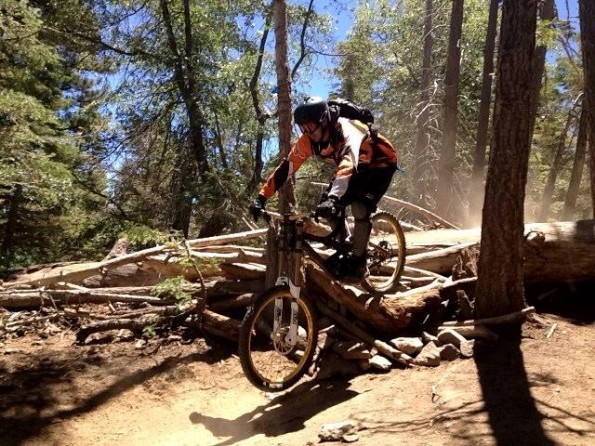 But on the whole, if you make the journey to Snow Summit for the downhill riding, be sure that you know how to ride a rear wheel drift and you can handle your bike in the rough stuff! To be sure, there are opportunities for some air time: there are kickers and wall rides spread throughout, as well as the occasional drop to launch, but most of the jumps have been built where the opportunity has presented itself thanks to a fallen tree or an old stump. There is nothing resembling the purpose-built table tops of most bike parks.

Local riders Scott Durkin and Blake Rennie were kind enough to show me some of the best trails around the mountain, and allowed me to grab some awesome shots of them shredding. They were also kind enough to help me out and wait around after I double-flatted my lightweight trail tires and regular tubes. After purchasing some crazy-thick, and super expensive, DH tubes, I was ready to roll again!

Truth be told, while you might be able to get away with a 5.5″ travel rig like the Jamis Dakar SixFiftyB I was on, I pushed that bike to its intended limits and then way past them. This bike has been holding up admirably to plenty of punishment! While there are no massive booters to send here at Snow Summit, the uber steep, technical terrain is definitely big-bike territory.

While the territory at Snow Summit isn’t nearly as expansive as the mammoth bike park at Mammoth, there is plenty of riding to keep advanced riders entertained for at least a couple of days. Also, if you do want to ride a shorter-travel bike, you can still utilize the lift ride to the top and put together a longer loop running further down the ridge, picking up some smoother singletrack trails that the big bikes generally avoid due to their remoteness. 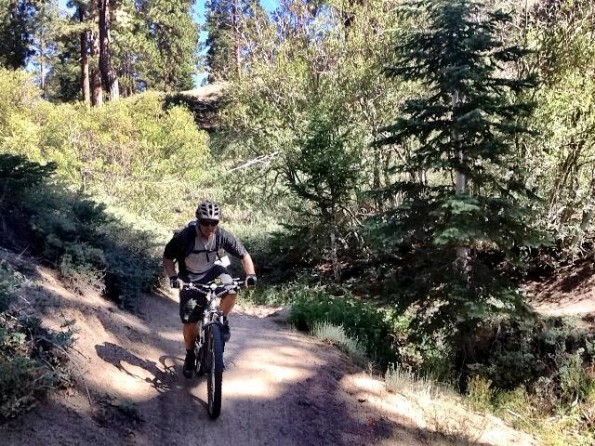 On one ride, my wife and I rode the lift up to the top, traversed the mountain on the gravel roads, and then dropped into the popular Pine Knot trail, which is a smooth but flowy descent down to the highway. Once at the highway, we just followed it back to the resort.

But there’s much more than just DH riding in Big Bear–stay tuned for an XC ride report from the other side of the lake!

Many thanks to Dan McKernan and the Big Bear Lake Resort Association for making this trip possible! For more information on Big Bear, be sure to check out www.bigbear.com!

Great report, especially the history @ Snow Summit. I know Leah went out there for a women’s MTB camp in ’03 or ’04 but I’m not sure which trails she rode…

The bike restrictions seem really bizarre to me, never heard anything like this. I mean, my hardtail 29er wouldn’t be allowed because it only has one chain ring (not single speed). The upshot to keeping bikes under 38 lbs. is you won’t get anyone attempting to ride these trails on a Wal-Mart bike. 🙂 Oh yeah, and no Pugsleys or Moonlanders. 🙂

Yeah it’s pretty crazy… like you said, I’ve never heard of such a thing before! But they are continuing to loosen them up, as most of the bikes on the lift just had one chainring. Hopefully the trend continues, and Snow Summit can transform into a true DH MTB destination again!

Didn’t have a chance to mention it in the article, but Snow Valley Mountain Resort, http://www.snowtoit.com/Resorts–Trails/California/Snow-Valley-Mountain-Resort_73_808.html located a ways down the highway from Snow Summit and under different ownership, is running a small DH race series this summer, which is the first DH race in the Big Bear area in years. Since that resort is a ways away, I didn’t have a chance to check the trails out and see what they’re like. Also, I’m not sure if the resort is open for riding aside from race days… if anyone has the scoop on Snow Valley, be sure to fill us in!

I don’t have anything against those bikes… but Snow Summit apparently does since they don’t allow bikes with tires wider than 2.7 inches. Check it out, RTA.

Edit: I can kinda see how my original comment about the Surly bikes seemed like it was lumped in with my comment about Wal-Mart bikes. Sorry about that, should’ve separated those thoughts with some sort of transition…

How did the lift ticket prices compare with places like Whistler and Mammoth?

Ok, so it was cheaper. I was hoping it would be since you weren’t actually riding their trails.