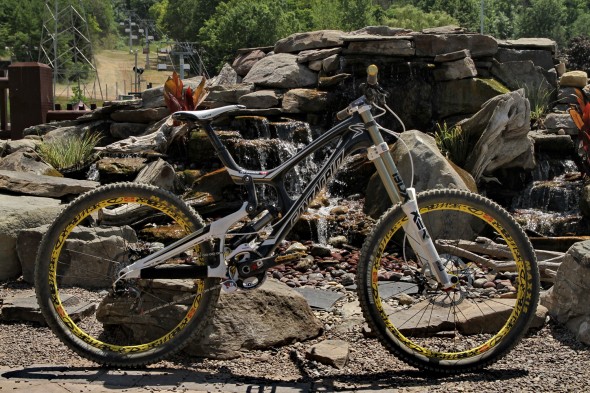 After another restful night, it took us a while to get ready. With two days of riding and the repeated physical battery from all the gnar that Mountain Creek has to offer, we took a bit longer than usual to make it out the door.

Seeing that it was our last day out, we didn’t want to kill ourselves, but we still planned get in an honest day of riding before heading back home. So to make the 12 pm check-out time, we spent an hour quickly going over the bikes and packing away our gear so that we could check out first and then ride the rest of the day.

It had rained very hard over night, and we were all looking forward to the change in terrain. Remembering what John had said about the slopes, we were expecting tacky surfaces: Mountain Creek dries up very quickly. With the 90-degree temperatures, the trails would not be soaked, but should be moist enough to keep the sand from flying.

Sure enough, the rain really improved the trail surfaces! We were worried the rocks would be wet, adding to the “excitement,” but that was not the case. In fact, the rocks were the first spots to dry. 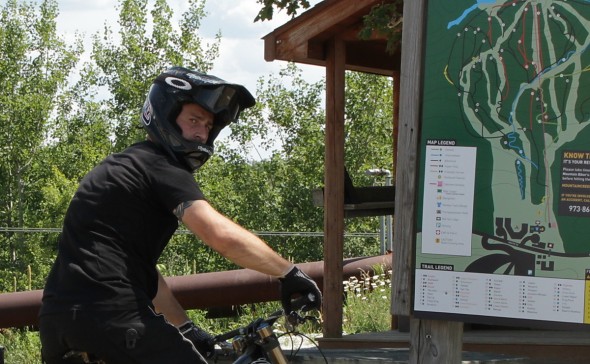 One funny thing I noticed was that nobody really felt like leading the charge. Jay’s eyes above say it all: “I am notpinning it on this run.” We all just wanted to follow and take it easy, unwilling to keep up the pace. In a way it was a good thing, as it took two easy runs before we really got our hearts pumping, thanks to an Upper Dominion to Evil Bob run (double diamond)–which I really think should be a triple! There’s nothing like not being able to stop on sniper rocks with inconveniently placed, off-camber slabs to push your heart rate through the roof! 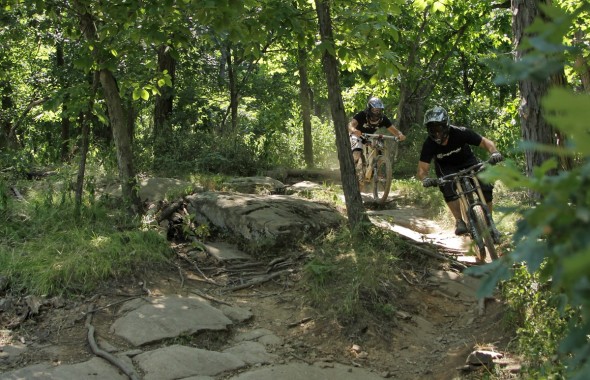 Despite that, it was pretty awesome knowing that the bikes could take it. Finishing off that run via Alpine (full of wooden berms) was simply a blast, especially when you top it all off with the Phantom drop at the very end. Speaking of which, when we made it to the Phantom drop, we met up with a black bear that was just kicking around a large rubble pile.

It was pretty funny, really: just a couple of days ago, John mentioned that there was a bear that hangs around, and he said that if we do encounter the bear, not to look him in the eye. So what were we all doing? Yep, looking the bear in the eye. He was just sitting there sizing us up… I was thinking that I had just to be faster than one of the guys in the group. Glen was thinking of kicking Chris off his bike, Jay was thinking about what John had said a few days back… no problem. Lucky for us, the bear decided to just wander over the rubble pile without bothering us. Now if only the GoPro pics turn out… 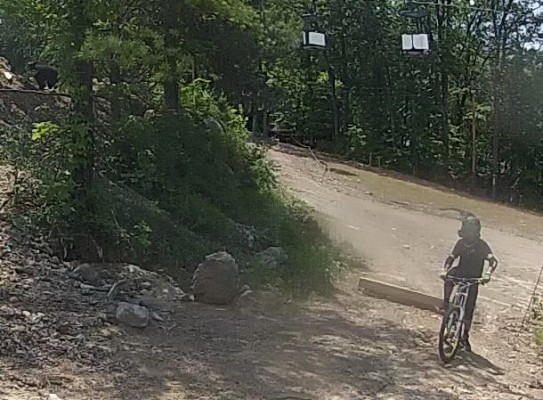 Check out the black bear in the upper left of the frame. 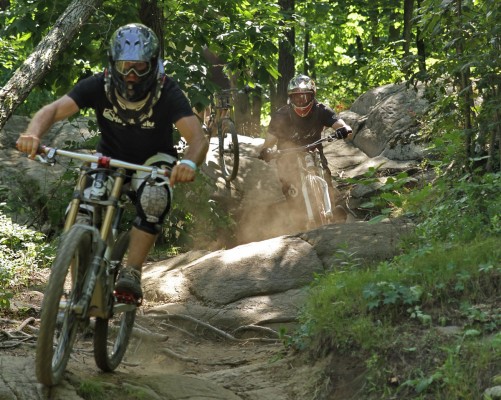 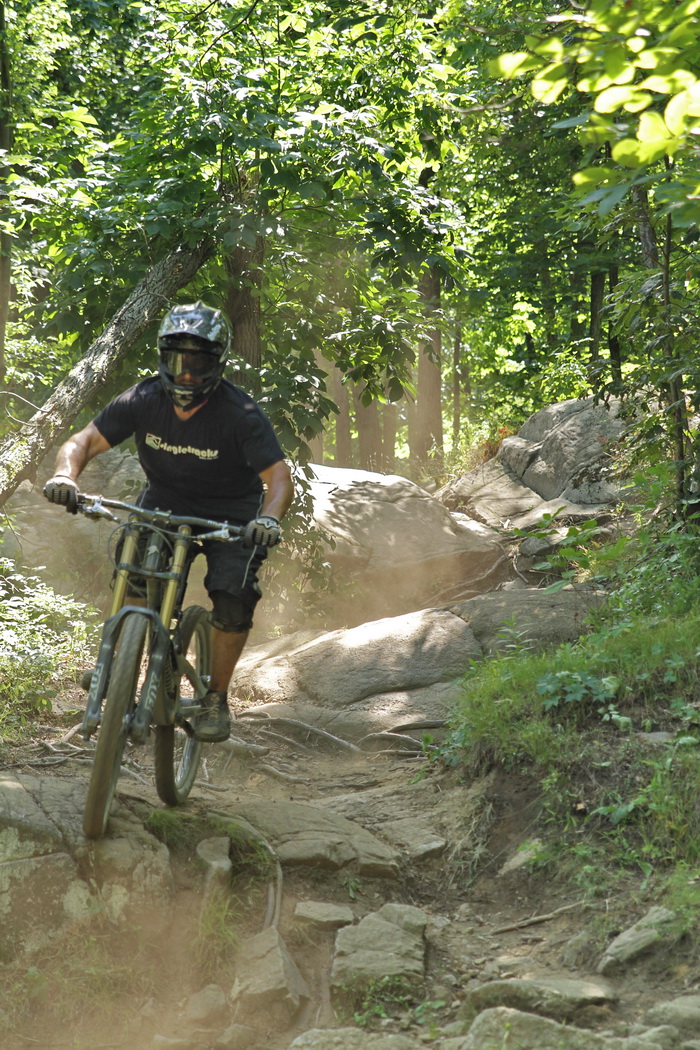 Heading back up the lift, I wanted to hit any run starting off with Outlaw again, so we ended up hitting that along with a mix of Legion, Waterboy, Asylum, and Utah, flowing through to Frog Pond and Indy. Getting a fast, clean run in, I was super stoked, but I knew I should call it a day. The last run through Stalker was awesome: the bike just sailed over all the tops of the rocks with no issues. It was almost as if the bike had control as the steering was surprisingly light. Again, I hope the video from the GoPro HD2 turns out well, as Chris followed me down that entire last run. 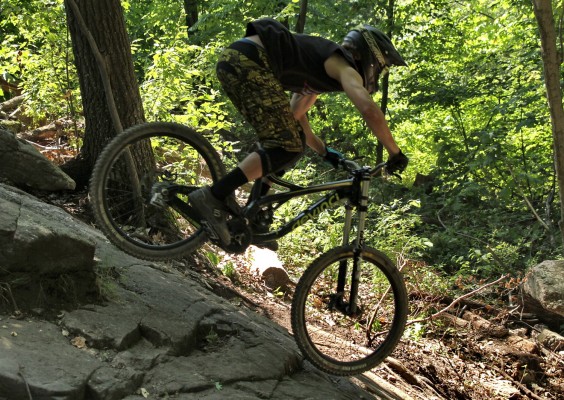 I called it a day a bit early to take a few photos, but the boys ended up hitting the hardest run: BMW to USO (US Open). From what I hear, it was an extreme challenge, filled with big, gnarly sniper shark tooth rocks and holes that will swallow a front wheel whole. Totally masochistic!

Check out this video that Chris put together from our time at Mountain Creek:

When I was done taking some photos, I happened to meet up with the guys cleaning up the bikes for the ride back: 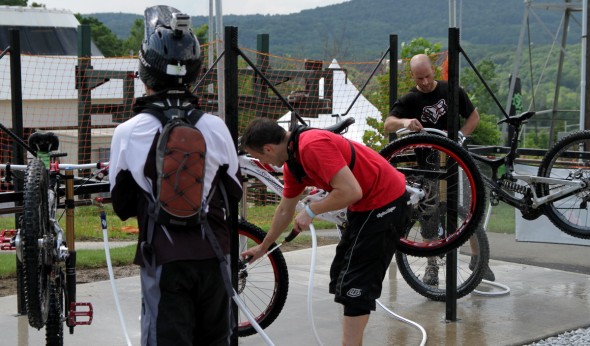 Mountain Creek is definitely worth a stop if you are into the downhill scene. There are a ton of other activities here as well, with an XC loop that just opened up and a full-featured water park that many people from all over take advantage of. There are even small sports fields where you can play on soccer, football, and baseball. There’s also an Alpine Mountain Coaster that should be up and running soon!

So when you get a chance, be sure to check out Mountain Creek! As far as my experience, I had an excellent time and plan on returning many times, and not just for the DH–on my way down I noticed a bunch of possible trailheads that are begging to be explored.

As far as equipment, the guys and I came away with a more intimate understanding of a few different things:

A big thanks to Hugh at Mountain Creek for arranging the accommodations while we checked out the bike park! For more information, click on over to Mountain Creek’s Bike Park page.

Great read! Sounds like such a fun day of shredding! I’m totally digging all of the uber rocky gnar shots. Call me crazy, but when I’m riding DH I actually prefer to pin it through a massive, steep rock garden as compared to sending it on big, smooth booters. There’s just something so gratifying about blasting through something that just looks impassable and coming out the other side in one piece, and not only surviving but crushing it with style!

@element22 : Very nice read. Looks like you had a good time out there. Being new to MTB this is one i def want to do moving forward. Might be a little rough for my hardtail though lol (Trek Marlin 29er) which is very good for my parts in East Texas (Mainly thick pine forest gaurenteed to have under 1000 ft elevation change.) Everything flows great with good man made features and technical creek stuff but thats about all of the excitment for my area.

Anyways, back to your post. Thanks for the tips, i go crazy trying to stay as educated as possible and the more info i know about DH the better the first time is goning to be.

Nice work with the #gopro. I have a couple of the Hero2’s and i love em. One thing to note, the #gopro bolts have the same thread pattern as the little bolt up places on the frame of your bike. i bolt mine hanging upside down on the frame near the drop outs. You get a pretty wicked view looking forwards and back. Ill post pics and vids soon, because im pretty sure i didnt do good explaining.

Anyways after a couple of months of just browsing every area of this site i finally decided to sign up so i could leave my fisrt comment. So… thanks!

Thanks castro. Had fun writing it, I hope you enjoyed it. If you do head out there have no worry as they do rent equipment so that you do not have to damage your HT. You will love it. I believe they have folks there that will take you around as well with instructions but follow up with them.

Great post and writing style. Especially I like that part where you mentioned about being the fastest in the group 🙂 That’s how people set new speed records

Thanks…If you have a chance you should check it out…I had a great time. Looking forward to going next year.