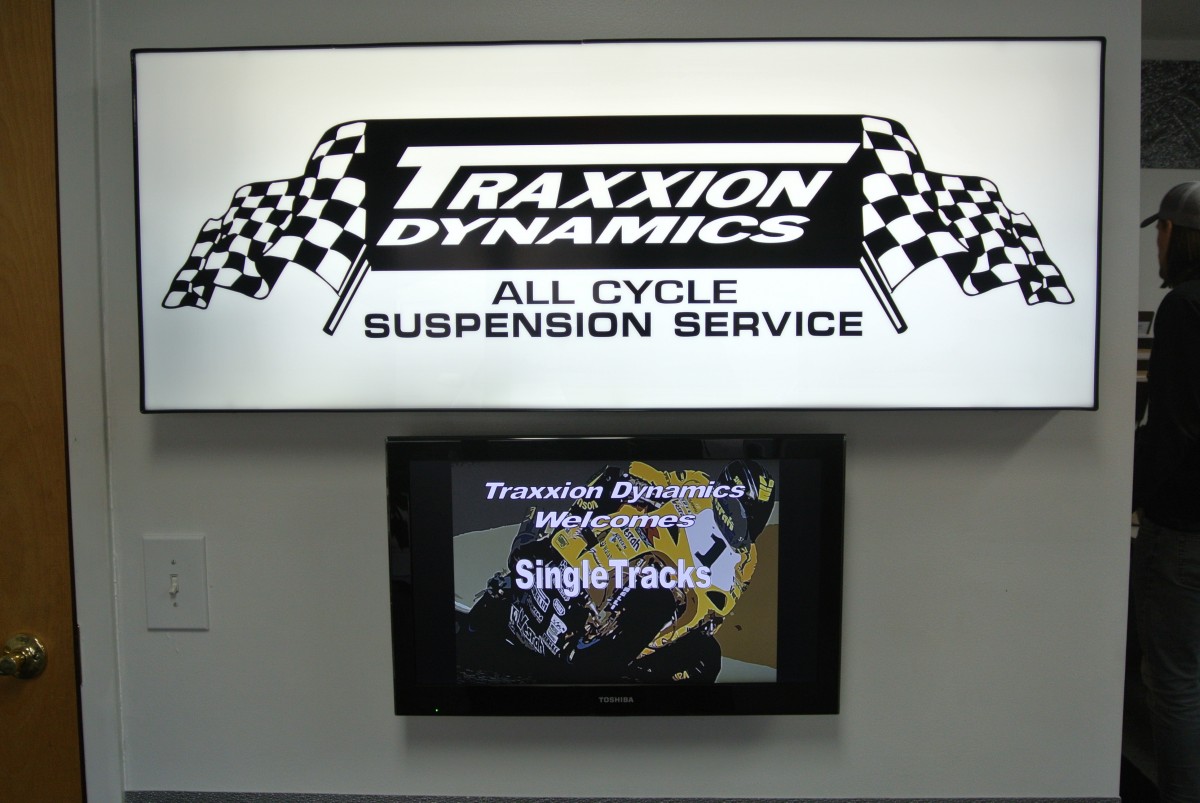 While checking out the race schedule on the Mountain Goat Adventures website, I noticed a company called Traxxion Dynamics listed under the sponsor section. I have lived and raced bikes in Georgia for years, but I had never heard of this company. Intrigued, I clicked the link over to Traxxion Dynamics’ site. There was a lot of information on motorcycle suspension and a small section on mountain bike suspension.

I reached out to their president, Max McAllister, about doing an interview and his response was an unequivocal, “HELL YEAH!!!” Recently, Jeff and I made the drive up to Woodstock, GA, to check out Max’s facility and talk about how he got into bicycles.

The most immediately noticeable thing about Max is his passion. He is passionate about his business, American manufacturing, bikes, and, of course, suspension.

Max has been around bikes his whole life, but the kind with gas–not human–engines. He began servicing race bike suspension by pushing a mobile workstation around the track. Eventually, he graduated to a full-on mobile shop in a truck before expanding into his current brick-and-mortar facility.

It wasn’t until three years ago that Max even started riding mountain bikes. His buddy had recently gotten a mountain bike to ride around the nearby Blankets Creek trails and as Max put it, “What is a best friend supposed to do? So, I went down and bought a bike.”

He recalled being worn out after just a few miles on the beginner loops at Blankets. Then, just a week after getting his bike, Max crashed hard, breaking both hands, a couple of knuckles, and his collar bone. It took seven hours of surgery to piece everything back together. Ten days later, Max was back out on the trails with cast and all.

“I was fully hooked. It didn’t discourage me at all.”

We talked about why people don’t understand their suspension as much as their other components. Max said it was analogous to what happened in the motorcycle world. For decades, motorcycle suspension technology lagged behind the development of the rest of the bike. People learned to work on the latest engines without investing time on the suspension. He thinks mountain bikes are going through the same learning curve, but it will be shorter, with access to so much information on setup and tuning available online.

Max encourages people to do some research on their bike and suspension to see what has worked for other riders. Use those settings as a baseline, and make adjustments from there. But he mentioned that, when turning knobs, “Less is frequently more.”

“Unless it’s blatantly obvious that it’s ‘oh my God’ better, you can just put it back and make sure you’ve done the right thing.”

As to why setting up your suspension matters in the first place, “Properly adjusted suspension is going to enhance your entire experience.” You will be more comfortable, confident, faster and even safer.

“A huge component of the suspension is safety. It really can save you when you get in over your head.”

Since Max is relatively new to mountain bikes, he hasn’t suffered through the growing pains of early suspension. He is amazed at the technology in current forks and shocks, but thinks there is room for improvement. His personal ride is a Specialized S-Works Epic–with some custom modifications, of course.

According to Max, mountain bike suspension should evolve to emulate what Specialized is doing with their Brain technology. Your fork and shock should have plenty of platform (firmness) until they need to react to trail features. And once your suspension hits a bump, it needs to rebound quickly to its initial position. It seems that suspension manufacturers and bike companies are already moving this way as “riding high in its travel” and “mid-stroke support” seem to be the marketing buzzwords of the day.

After spending a couple hours chatting in his office, Max took Jeff and me on a tour of his facility. He showed us their bread-and-butter component, a gas-pressurized damper that drops right into a variety of motorcycle forks, from race bikes to cruisers. Modern day mountain bike damper cartridges (FIT from Fox, Charge from RockShox) look remarkably similar to their moto counterparts.

They manufacture the vast majority of their components in-house. Some items, such as springs and seals, are sourced from other domestic vendors. Traxxion Dynamics also sends parts out to be anodized, as that’s an involved process that requires lots of nasty chemicals. All the little metal bits–and there are a lot of them–are made in the machine shop. 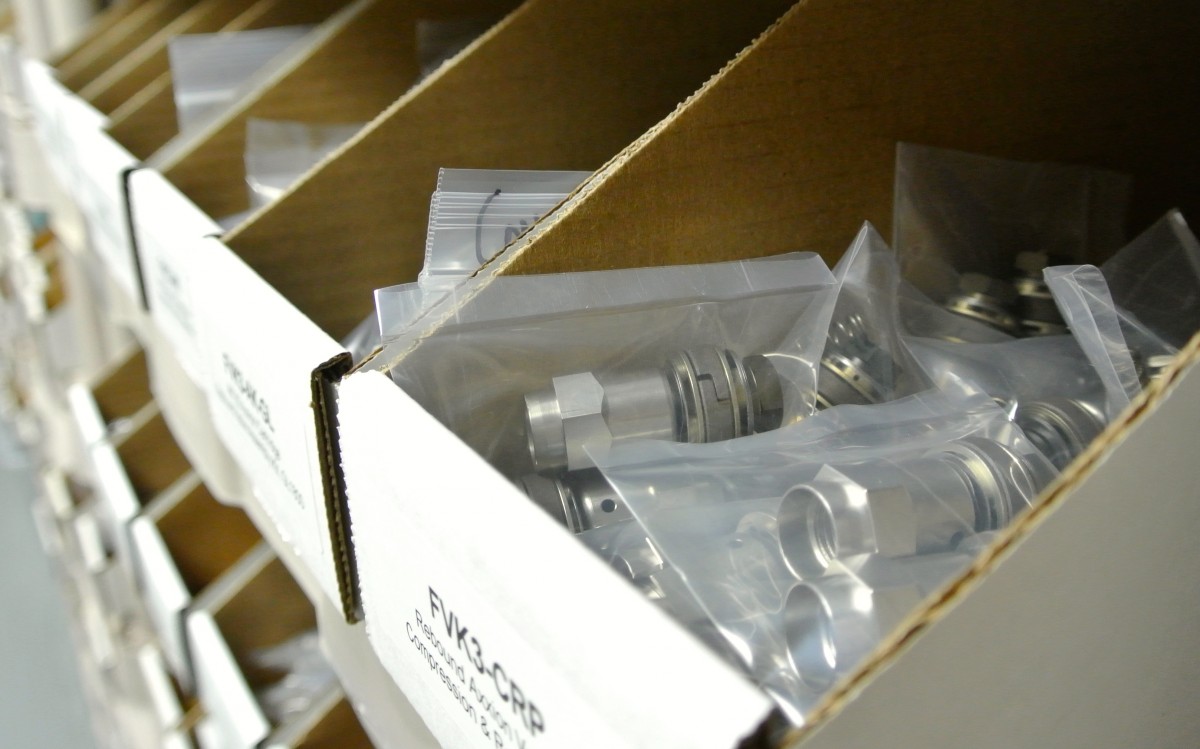 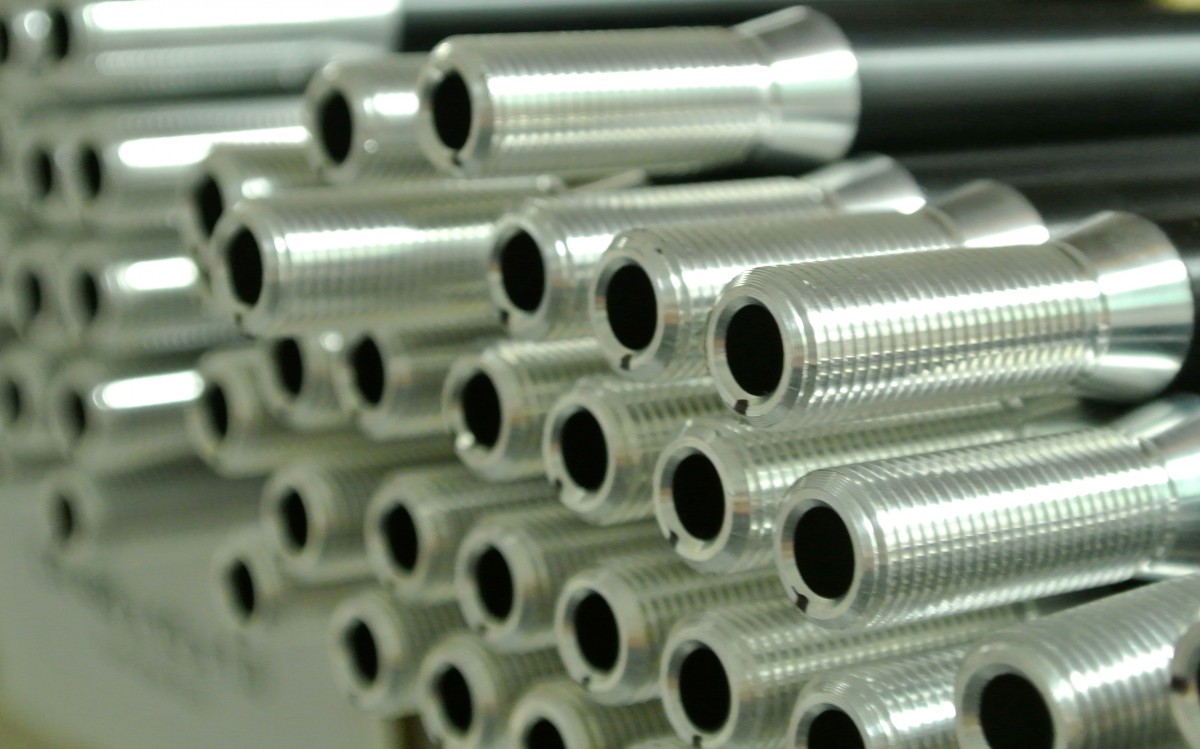 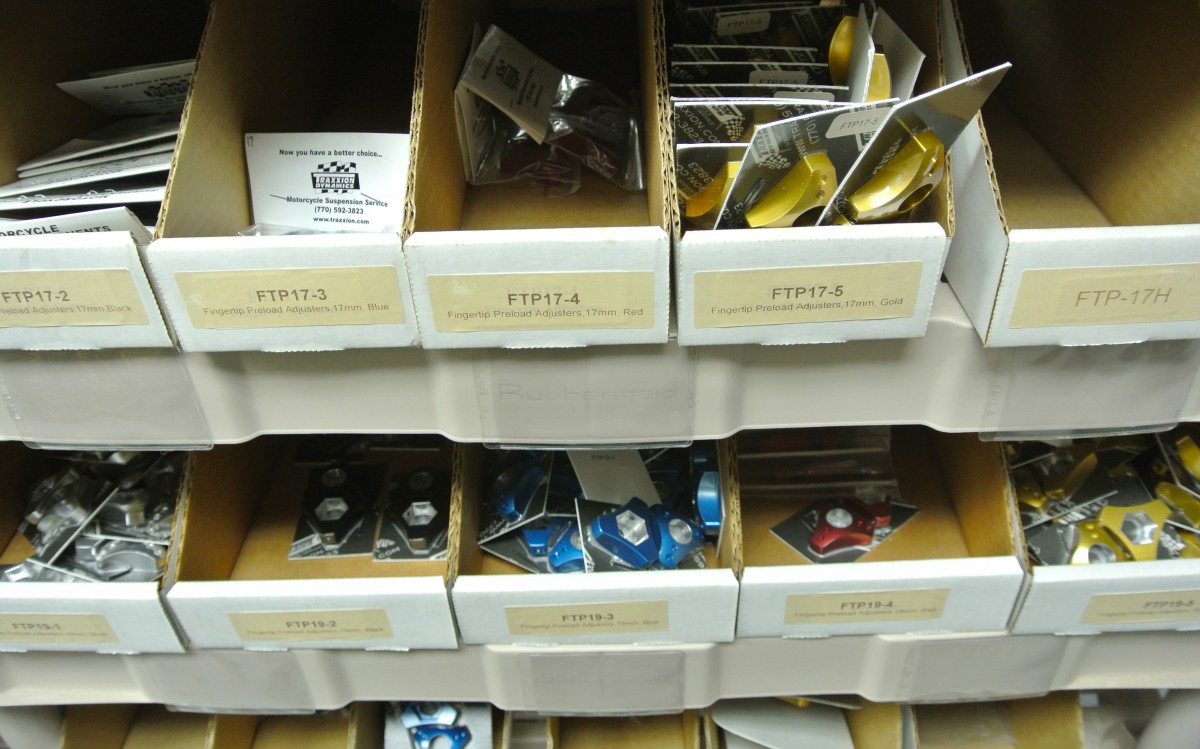 Every room at their facility is clean, bright, and organized. It’s an extremely professional operation. I know we all get caught up in how expensive bikes are, but when you compare them to a 1000cc racing motorcycle, they start to look like a bargain. Traxxion Dynamics is used to working on motorcycles that cost as much as a small fleet of well-spec’d carbon bicycles.

Traxxion Dynamics will work on any brand of suspension: RockShox, Fox, Marzocchi, Manitou, etc. Assuming parts are available, they are confident they can tear down and rebuild any suspension component.

Another service that Traxxion Dynamics offers is their ultrasonic parts washing. The washer uses a mild, non-toxic detergent and gets parts extremely clean. If you send your fork in for service, it will get this level of attention. Max threw a dirty shock in for just a couple minutes to demonstrate, and it was much cleaner when it came out. If it had been left in for longer, it would be pristine.

Max wants to prove that American manufacturing is still alive and well. He pointed out that his machines were made in California, the light fixtures came from Georgia, and even the coating on the floor was made in New Jersey. As much as he can, Max buys American.

Seeing the excitement Max has for his business and for riding was inspiring. This is a guy who knows his stuff and is more than happy to share the knowledge he’s gained over decades of working on suspension.

If you live in the Atlanta area, you can visit their shop in person to have your suspension serviced. You can also ship your fork to them to get it worked on, with a turnaround time of one week.

Thanks to Max and his team at Traxxion Dynamics for taking the time to answer our questions and show us around!

Gear
Never Underestimate the Power of a Good Zip-tie
Gear
The Maxxis Minion DHF Tire is Still the One to...
Gear
Mountain Bike Tire Repair Tips: From Emergency to Semi-Permanent
Gear
These MTB Deals are Fire, including 40% off Patagonia Dirt...
Subscribe
Login
Please login to comment
1 Comment
Most Voted
Newest Oldest
Inline Feedbacks
View all comments

AWESOME article. I love reading about American manufacturers, especially ones as dedicated to buying American as Max!