If you were following the Singletracks feed on Instagram, you probably noticed Greg and I posting a lot of 27.5+ and 29+ bikes, components, and tires. While there was plenty to see at the show (and some exciting things in the works that will debut later this year), the majority of manufacturers that had truly “new” stuff were showing something related to the plus-sized wheels.

There were a handful of 29+ bikes — a size which has been around for a little while now — but most of the buzz was around the more recent 27.5+ size. Some bikes were attempting to cover a range of sizes from 27.5+ to 29 to 29+. Is that enough numbers for you?

Below is a collection of all the plus-sized mountain bikes we found while traipsing around the dust bowl that was Sea Otter 2015. 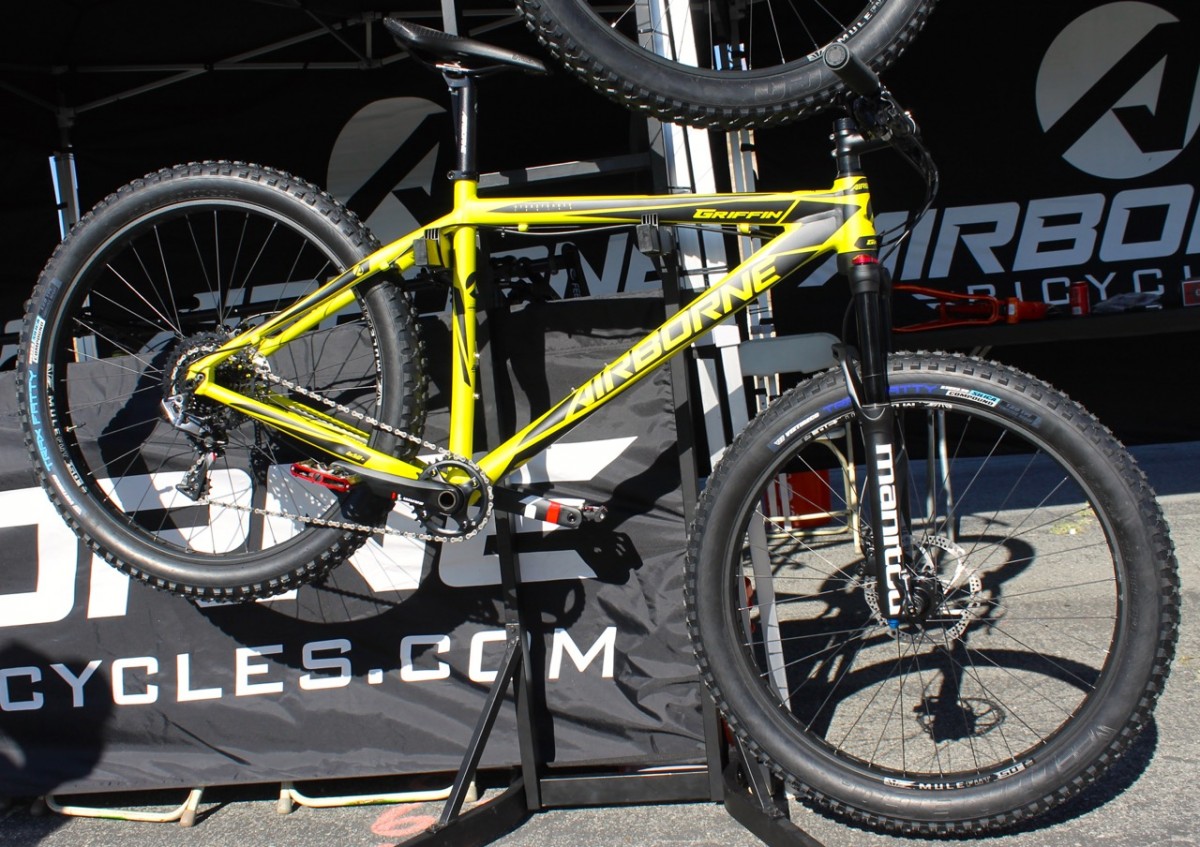 The Airborne Griffin is still in the testing phases, and the bike pictured here is a prototype that has already been modified. The latest version of the bike should be showing up at Airborne HQ soon for more testing, and hopefully we’ll see the production version of this bike soon!

While it’s a bit difficult to predict what the final build spec will be, the rig we saw from Airborne was sporting the new Manitou Magnum fork, VeeRubber 2.8″ tires, and Sun Ringle’s MuleFut 50mm rims. -Greg 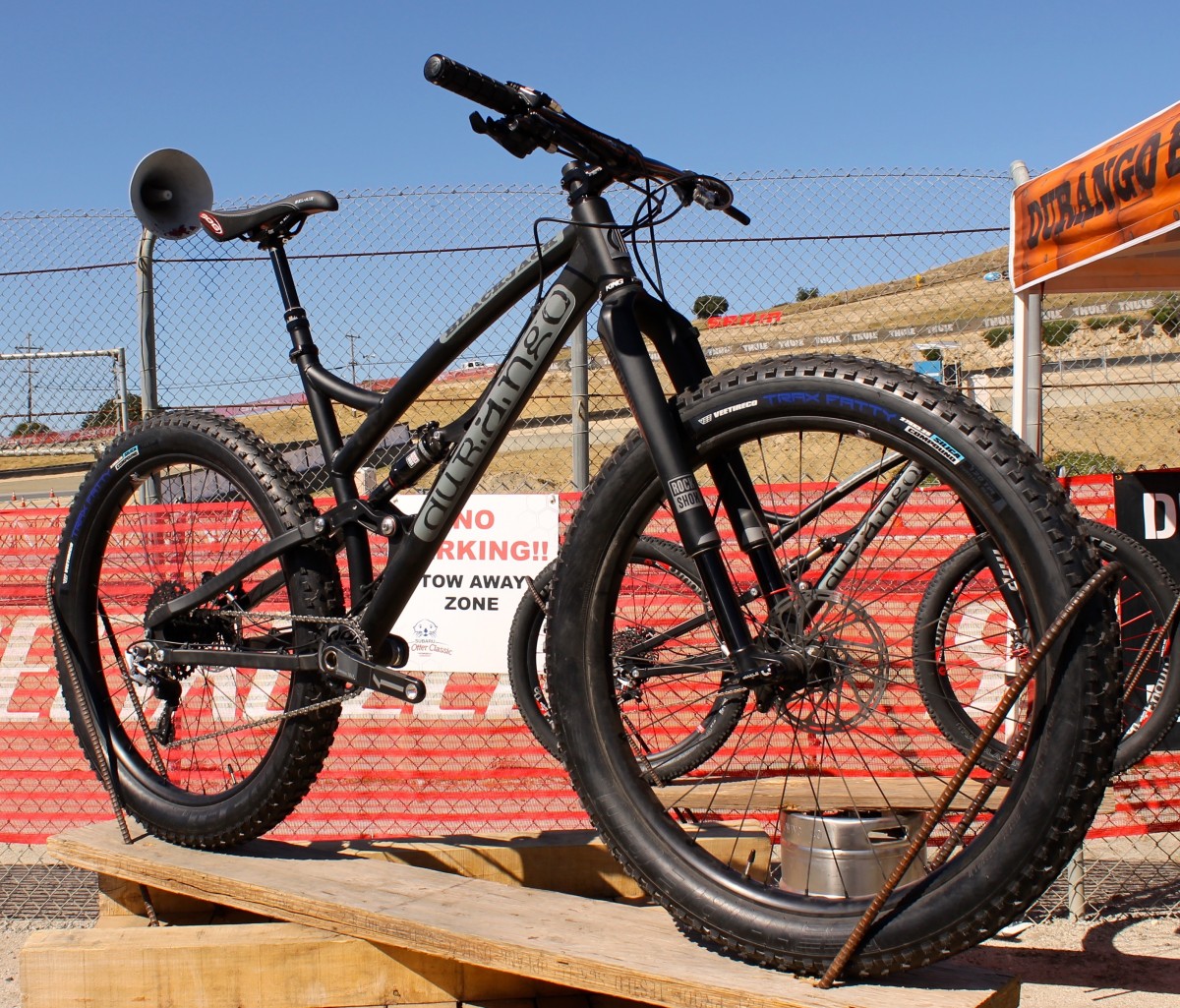 Erica already reviewed the Blackjack–but setup as a regular 29er. However, the main goal of the Blackjack was to be a leader in the 27.5+ trend. I believe this is the only production–as close to production as you can get with a small handmade-in-the-USA company–full-suspension 27.5+. The Blackjack we saw at the expo was spec’ed with a RockShox RS-1 fork, RockShox rear shock, VeeRubber Traxx Fatty 3.25″ tires, and a SRAM XX1 drivetrain.

There was also a different build kit in the booth featuring the MRP Stage fork, WTB’s 2.8″ 27.5+ tires, a Cane Creek DBAir, and a SRAM X01 drivetrain. Pricing will vary depending on the build kit and will roughly run $4,500-$6,500. If you want this bike, get your order in ASAP before Durango Bike Company’s queue gets filled! -Greg

Fezzari sells their bikes direct to consumers, which allows them to provide some pretty incredible value. They are legit riders that care about giving the customer a bike that works well out of the box. Before bikes leave their Utah warehouse, they are fully assembled, tuned, and ridden (inside, of course) to make sure that when you get it, you’ll be ready to go.

The Cascade Peak is a 27.5+ full suspension with 120mm of travel. The photo above is of a prototype that Tyler from Fezzari assembled in his hotel room before the show, which is why you may notice the uncut steerer tube. The Cascade Peak will be available later this year with Fox suspension and a Shimano XT drivetrain for $2,800 MSRP. 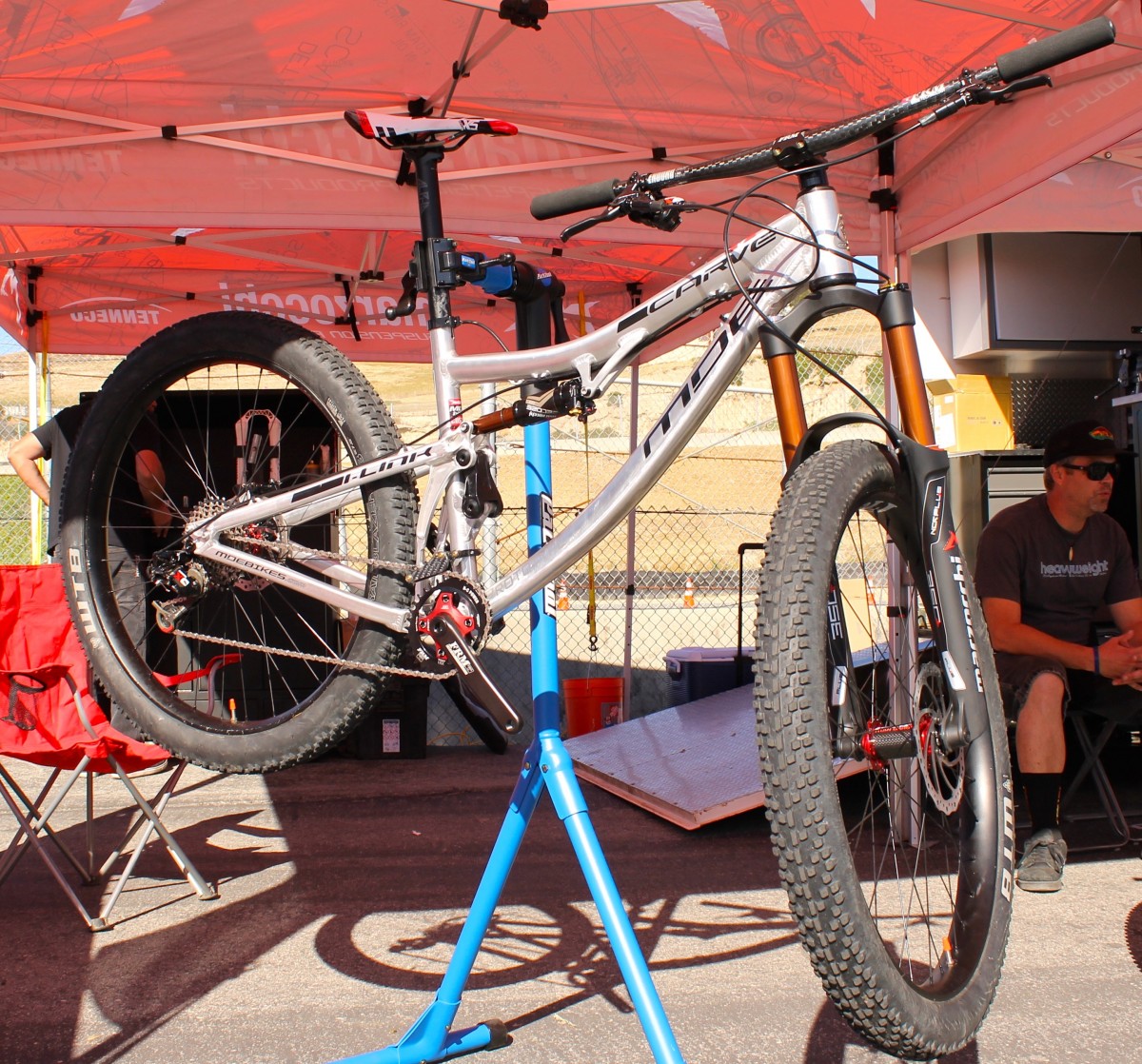 We spotted this MDE Carve 27.5+ in the Marzocchi booth. It’s hard to say whether or not this is a production bike or a prototype (I’m guessing prototype since it’s not listed on MDE’s website), but this specific rig is sporting WTB Trailblazer tires, WTB Rims, and a Marzocchi fork. -Greg

Mongoose is getting into the plus game as well with their new 27.5+ hardtail, the Ruddy. It’s a 2016 model that will be available direct from Mongoose this fall. Two spec levels will be available, the Comp and Expert. The Expert will use a Shimano drivetrain with an XT rear derailleur. Suspension duties are handled by the (seemingly) ubiquitous Manitou Magnum fork. Retail will be $1,899 for the Expert build. Another nice touch on a bike at this price point is the 35mm clamp diameter on the bar and stem. Mongoose claims that it really helps with the steering response, considering the amount of meat you’re pushing around. 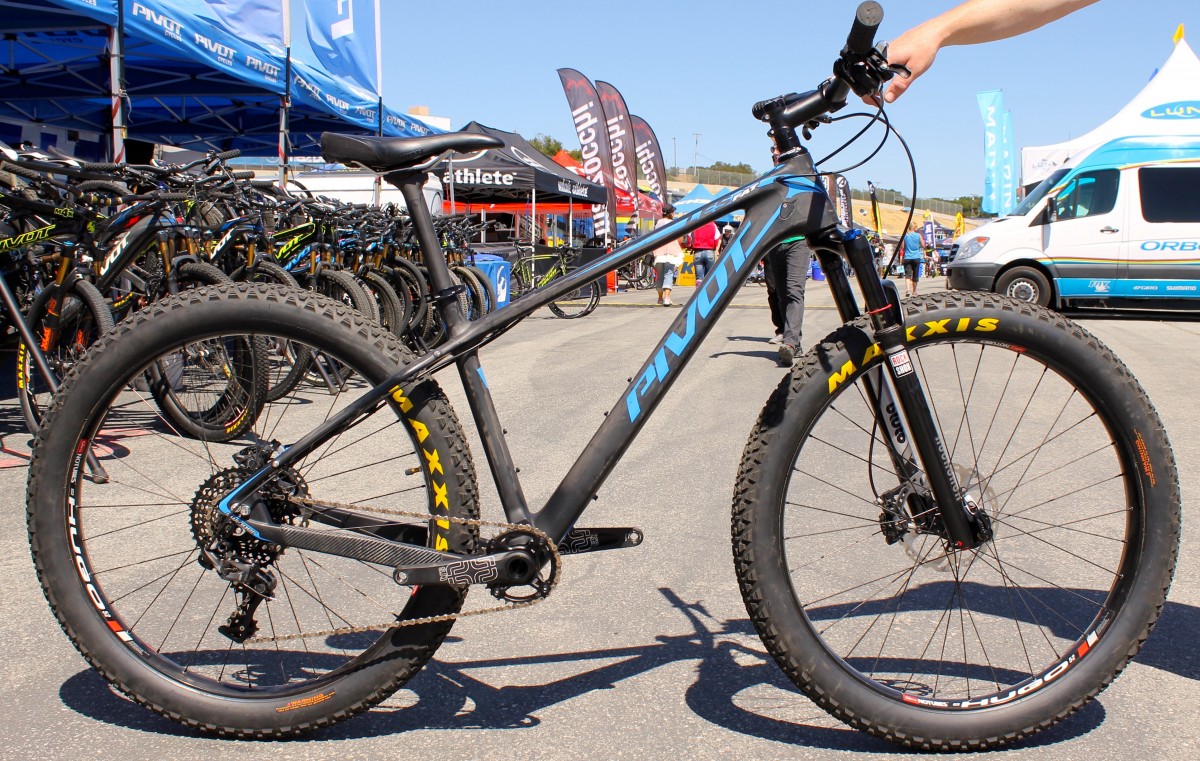 Now it’s no secret that most fat bikes can run 29+ wheels/tires, and can even go 27.5+. But the LES Fat has been specifically designed to do so, and to adapt to the geometry changes that the changing wheel and tire sizes create. It does so by means of Pivot’s proprietary “Swinger II dropout system.” For more tech information, be sure to read this news article. MSRP: $4,699 -Greg

Rocky first showed the Sherpa as a concept bike at Sea Otter in 2014. This year it made its primetime debut as a full production bike. If you haven’t already, check out the first review of the Sherpa here. Christophe’s review is full of details and great pictures, so I won’t go too much into it here. Expect to see the Sherpa at your local Rocky dealer in May with an MSRP of $4499.

The bags in the picture are from Porcelain Rocket. The handlebar and seat post bag are stock units, while the frame bag is custom to the Sherpa. Porcelain has the templates for each size frame, so if you get this bike and you want a high quality frame bag that will fit, get in touch with them.

WTB was arguably the first company to embrace the 27.5+ wheel size. Their 45mm Scraper rim was part of the inspiration behind Rocky’s Sherpa. The 27.5×2.8″ Trailblazer was the first tire in the game.

At Sea Otter, they were showing a new 27.5+ tread pattern called the Bridger. At 3″ the Bridger is wider than the Trailblazer and decidedly more aggressive. It will be available in two casing options: TCS Light and TCS Tough High Grip. Weights will range from 1,200g for the Light to 1,500g for the Tough. Expect to see them in your shop this August with a starting retail price of $67.95.

The display bike that WTB had in their booth was a 27.5+ full suspension prototype from Salsa. It had a carbon front triangle (maybe from the Horsethief?) with an aluminum rear triangle. The bike also had the new 27.5+ RockShox Pike up front. Honestly, we thought we’d see more bikes in this vein rather than the large crop of plus-sized hard tails that were at the show. 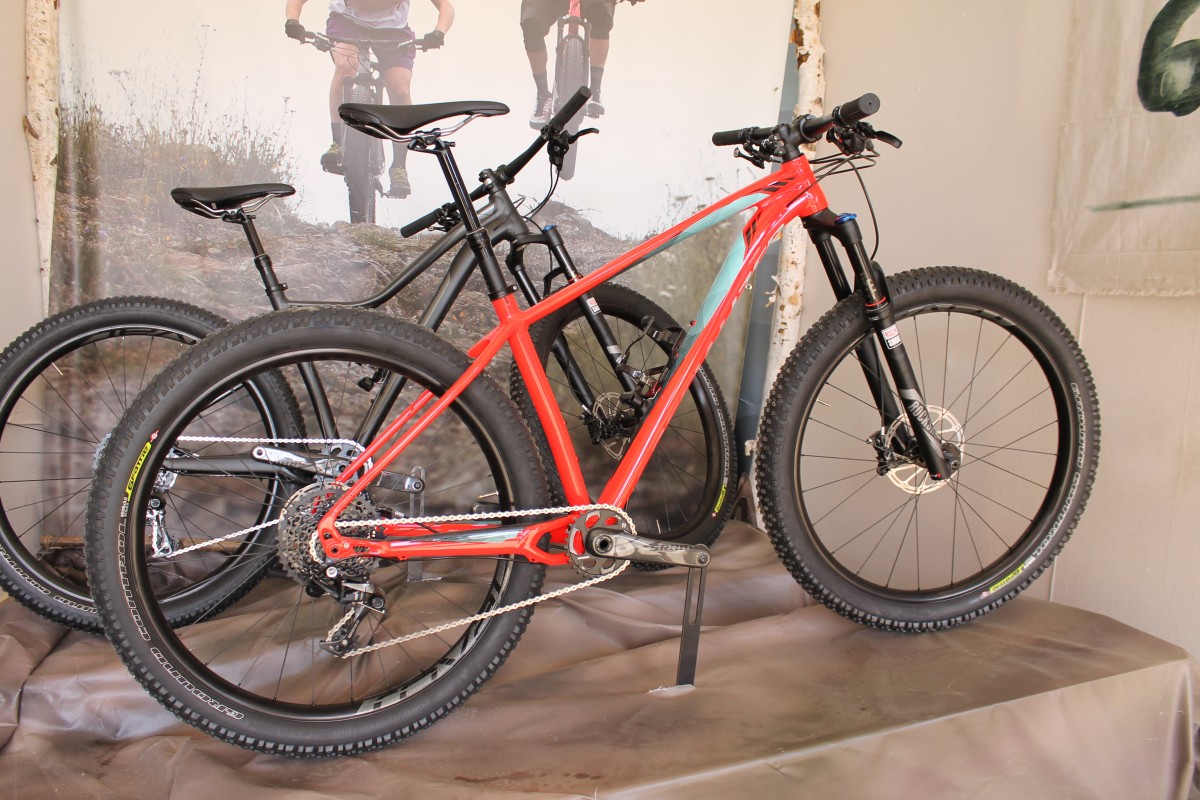 The Fuze and the Ruze are both two sides of the same 27.5+ coin. The Fuze is the male-specific bike and the Ruze is female-specific. These 27.5+ rigs run on Specialized’s own tires and their own 38mm rims–they claim 50mm rims are too heavy and negatively impact the tire shape and handling characteristics. 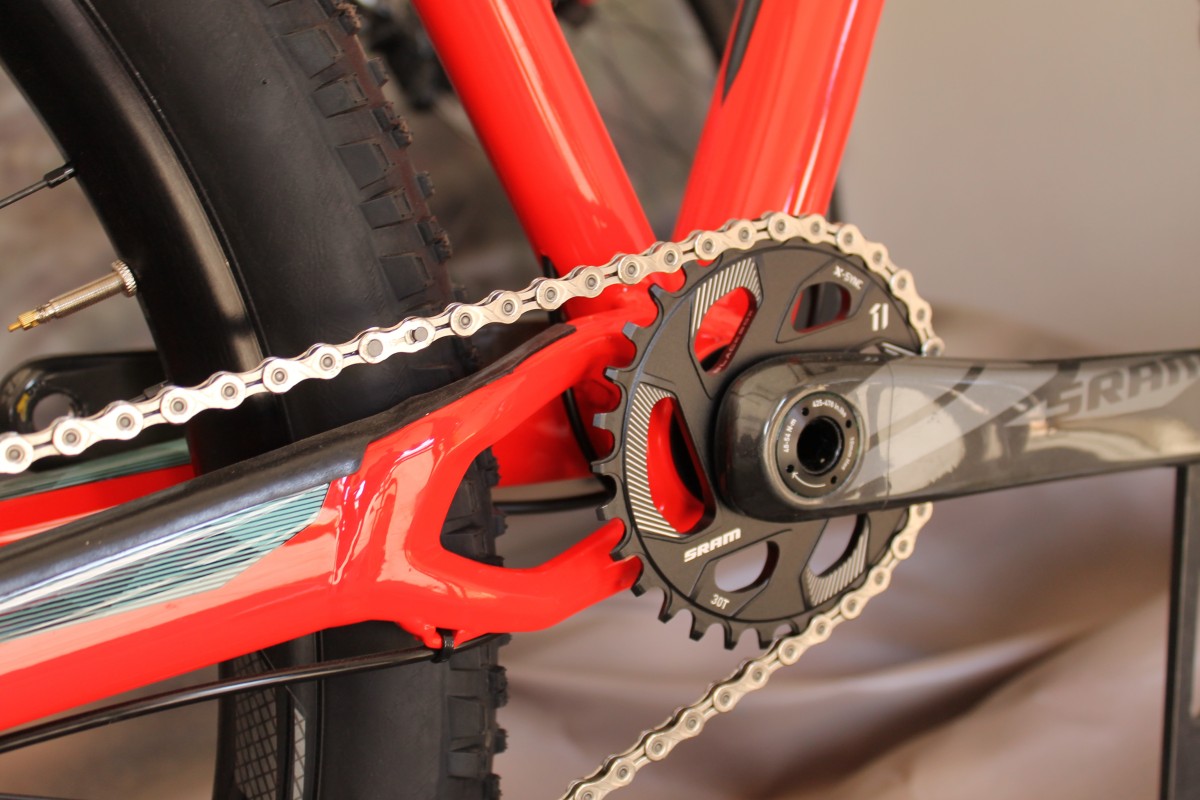 While Trek chose to elevate their chainstay, Specialized chose to use a cutaway in the stay itself in order to give the chainring clearance. The Pro version of the Fuze will retail for $3,100 MSRP, with prices going down from there. -Greg 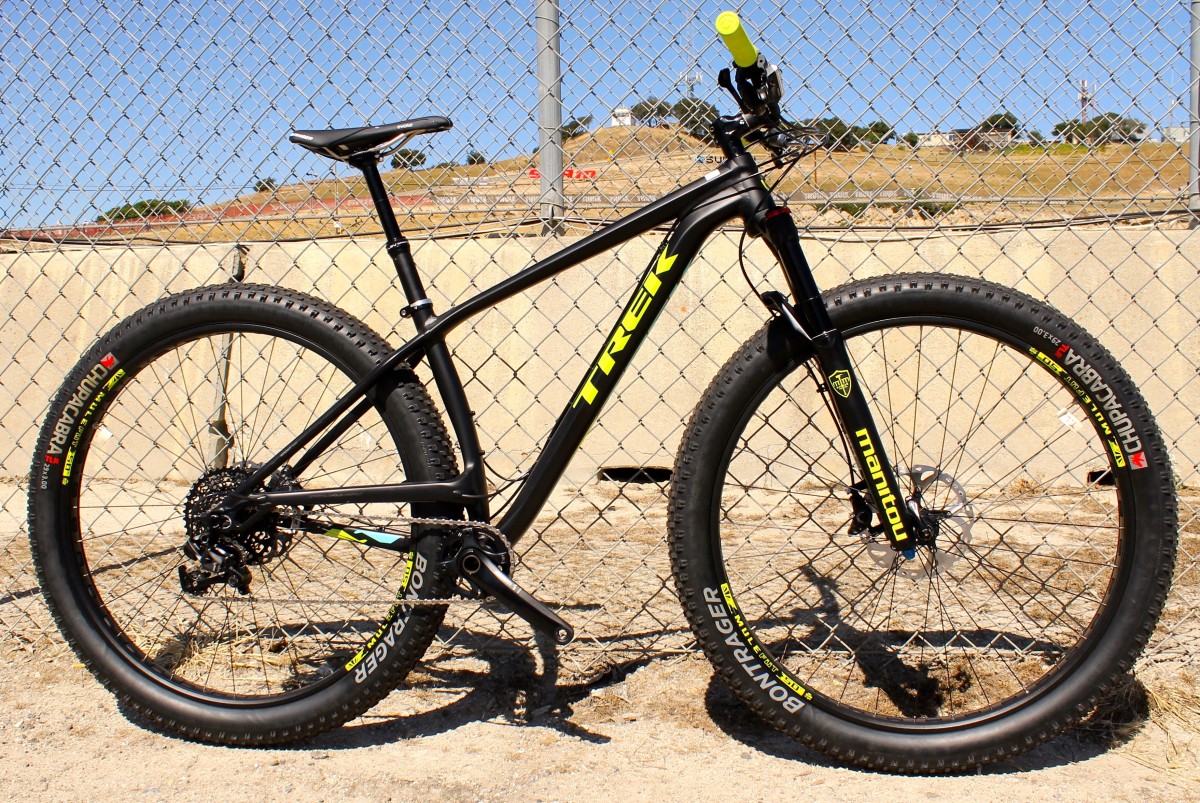 I’ve already reviewed the Trek Stache in detail, and you can read all about it here.

To make a long story short, the Trek Stache actually comes stock with 29+ wheels and tires, but it can be converted to run 27.5+ or regular 29″. There are several different build kits available, but I reviewed the top-tier build spec’ed with a SRAM X01 drivetrain and a Manitou Magnum fork. This top build retails for $3,879.99, and prices on the other builds go down from there. -Greg 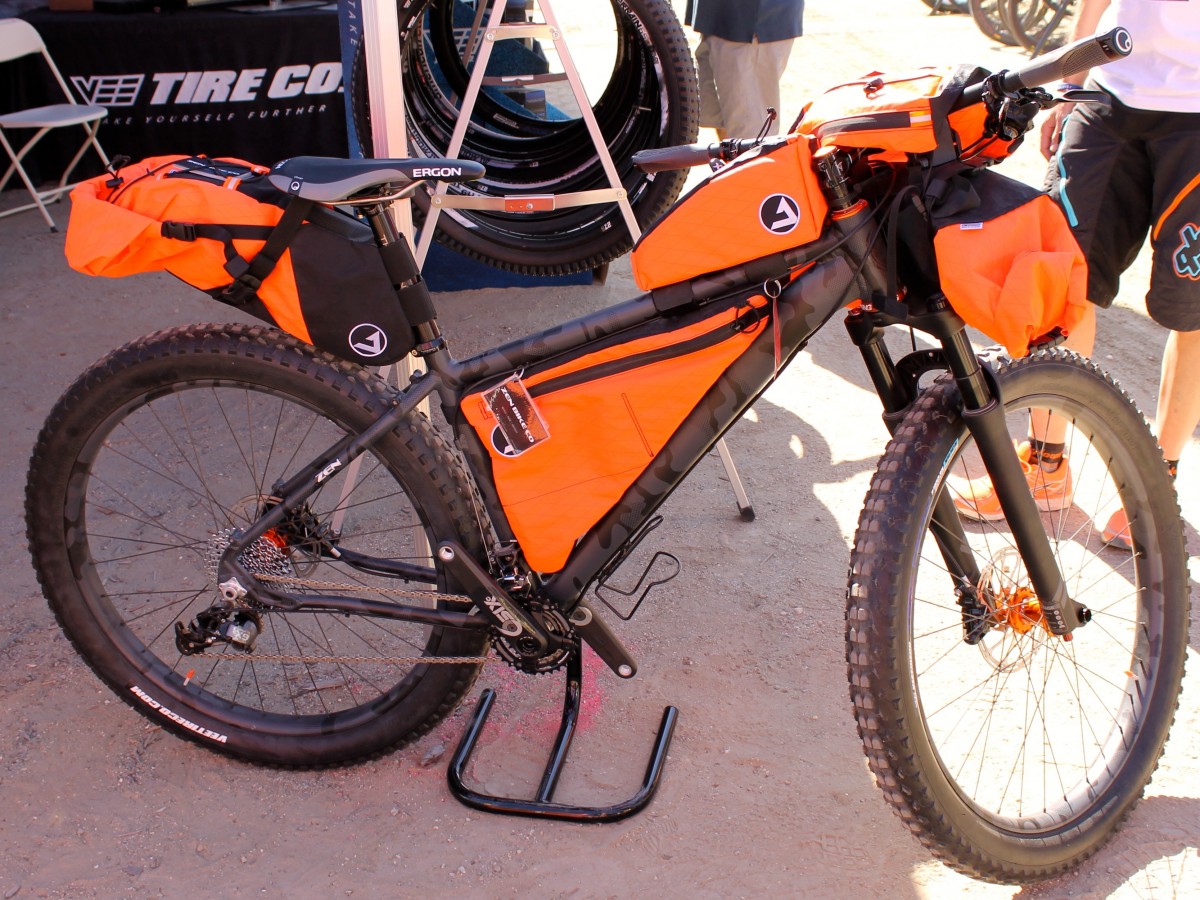 Zen Bicycles is a small made-in-the-USA bicycle company, and they have been showing off their talent with a 27.5+ bikepacking setup. Their website lists the bike for $3,500, but claims that retail is $6,500 with a full bag setup. -Greg

Your Turn: Are you going to be snagging yourself a new 27.5+? Why or why not?

What is the handle bar on the MDE Carve? Those are BEAUTIFUL