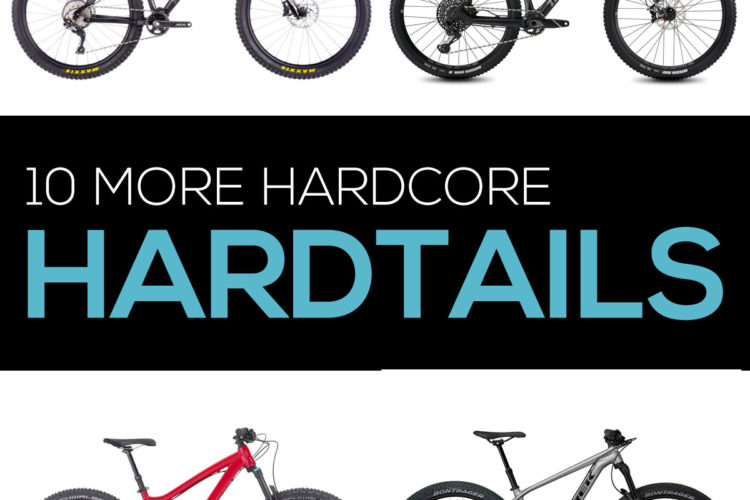 10 More Hardcore Hardtails: These Mountain Bikes Get Down
By Michael Welch    on Jun 4, 2018

These aggressive hardtail mountain bikes are designed for trail riding and beyond, and each offers at least 120mm of front suspension travel. Recommendation: To begin, when I first started riding (like most of us) I started off with a fairly light and inexpensive XC hardtail mountain bike. At first, I was giddy at the thought of being able to ride on dirt, blasting in between trees and flying through rock gardens. Then reality hits and I felt every root and rocks in my teeth, knees and back. In short, in only less than a year of riding, I traded in the bike for a plushy full suspension bike and vowed never to go back on a hardtail. Ever since, I've been using a full suspension bike and has transitioned from riding in singletracks to jumping in bike parks. Fast forward to yesterday when I got a chance to demo a 2017 Orange Crush S. Just by looking at it, the bike's low standover and short chainstay hints more on dirt jumper bikes, 11 speed cassette for XC bikes and the long slacked out 150mm fork seems out of place for a hardtail. With an aggressive and wider WTB Vigilante 2.3 tire up front and faster WTB Trail Boss in the rear, the bike's overall appearance looks aggressive. Even without a rear shock, the bike's back end looks like it has been bottomed out and just waiting to explode. Adjusting to the fit, it reminded me right away that I'm riding a hardtail. I did not get that plush soft feel of the rear sag when I sat on it, and when I stood up, the long travel fork made me feel unbalanced as it compressed down and made me lean forward. The long top tube combined with the 50mm stem and 760mm wide handlebar was spot on as it made the cockpit roomy yet you don't feel overly stretched. Warming up in the parking lot, I started doing figure 8s. The bike was nimble and very responsive. At one point I leaned too much into a tight turn and compressed the fork. For sure I thought "This is it! I'm hitting the ground, in front of everybody and in the parking lot!" But this did not happen. Amazingly, I was able to catch myself and the bike straightened itself out. Was not sure what just happened, but if it was any other bike, for sure I would have gone over the bars. After composing myself from a near death experience, I started getting more comfortable. The long top tube with the short chainstay made the bike very easy to manual and bunny hop. The 11-speed Shimano SLX coupled with the 11-42 tooth cassette were perfect and had enough gears on the climbs. In the trails is where this bike showed its true colors. It seems to want to be thrown around. Instead of rolling over rocks and roots, this bike begs and dares you to jump over them. The fork, which seems out of place, now makes total sense as it soaks up the initial impact as well as the landing when you start to get air born. The low bottom bracket, aggressive front tire combined with fast rolling rear tire wants you to push into the berm and drift the rear end. Oh yeah, I'm having fun on this bike! My smile was from ear to ear with the occasional mud and dirt in between my teeth. My initial thoughts on hardtail bikes were starting to drift away. Afterwards, I felt a bit confused. How can a hardtail be this fun to ride? My knees were yelling at me, but I was having such a blast! This "Jekyll and Hyde" of a bike was unexpected. For beginners in the sport, you can cruise along with this bike. But when once you start progressing (and start losing IQ points), you will find yourself pushing your limits. For the advanced riders, this would be a great addition to your arsenal. Your small sidearm for those quick draws. With an MSRP of a little over $2,000, plus the need to add a dropper seat post, it is bit on the expensive side, but a bargain premium brand bike. If you want to have just one bike to take in most of the trails, in my opinion this would be it. And yes, I want one!