Keeping your bike tuned-up is very important. Regular tune-ups help riders catch problems before they turn into major disasters. They also ensure bikes operate at peak performance. However, not all tune-ups are the same. Different bike shops offer different tune-up packages. So what does a tune-up involve? For help in answering that question, I turned to my local bike shop. 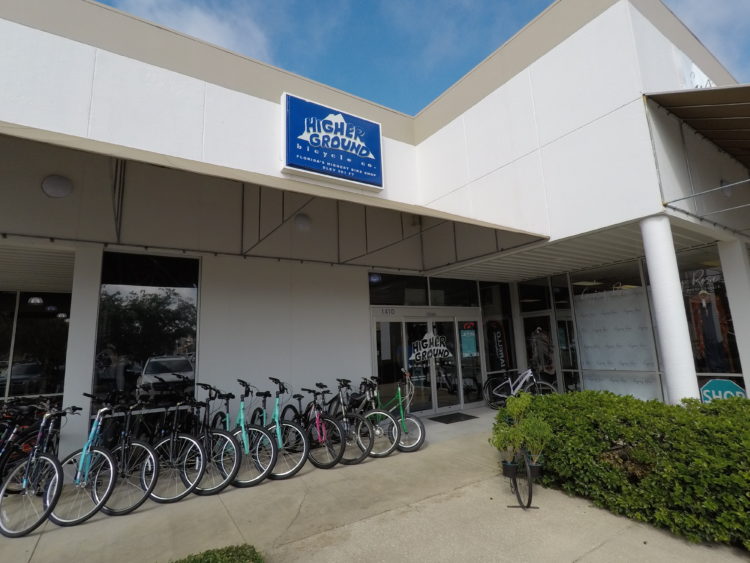 Higher Ground Bicycle Company advertises itself as “Florida’s Highest Elevation Bike Shop” at 201 feet above sea level. It has been a fixture in Tallahassee since 2001. Higher Ground has a full-service repair shop that handles all kinds of bikes. As its website proclaims, the staff at the shop live and breathe bikes. Not only do they sell and service bikes, they also organize weekly group rides, participate in trail workdays, and volunteer at local races. I have been a loyal customer since 2012, and know most of the staff by name, including Scott Hulslander, who gave me the low-down on tune-ups for this article.

Scott began working on bikes in 2012 when he was at college in Pensacola, Florida. He has worked for Higher Ground for nearly three years. Scott grew up around cars, and has an extensive mechanical knowledge that translates well to bikes. He knows me and my bike very well, and was happy to walk me through the basics of a tune-up.

The different kinds of tune-ups

A tune-up is a term of art that can have slightly different meanings depending on what bike shop you go to. Shops often offer various tune-up packages. For example, Higher Ground offers two different packages. The first one is the safety tune-up, which costs $45. For that price, the shop will check over the “nuts and bolts” of the bike. They will also check the operation of the bike (drivetrain and brakes), and inspect the frame, wheels, and suspension, but won’t make any adjustments except for a barrel turn here or there.

The second package Higher Ground offers is the standard tune-up, which costs $75. This package is more expensive due to the additional labor involved. The shop looks over the frame and fork of the bike carefully, checking for any cracks or defects that might render the bike inoperable. They check the torque on every bolt, tighten the lock ring on the bottom bracket if needed, and adjust the hubs as necessary.

They also check the shifting and the brakes to make sure they are operating correctly. The tension of every spoke in both wheels is checked, and the wheels are trued if needed. As Scott explains, “the things that need to be adjusted are adjusted, and the things that need to be lubed are lubed.” On full suspension bikes, the shop also checks the suspension set-up, and makes sure that it is properly tuned to the rider’s weight.

There are some shops that offer even more robust packages. Scott previously worked in a bike shop that offered a complete overhaul package for $240. For that price, the shop would disassemble the entire bike and build it back up again. The price covered all the labor involved, but the customer saved money on labor costs if any parts needed to be replaced since the bike had already been taken apart.

Scott mentioned that shops sometimes offer a cleaning package as an add-on to the standard tune-up. It involves taking the drivetrain apart and putting it in an ultrasonic cleaner. Higher Ground offers such a package for an additional $30, but the cleaning is done by hand instead of using a machine.

The process of doing a tune-up

To help me better understand the process of doing a tune-up, Scott pulled out a customer’s bike and put it on the stand. “I start all my tune-ups at the rear of the bike and work my way to the front,” he explained as he began inspecting the bike. Scott started by checking the rear wheel to make sure all the spokes had tension, and that the wheel was true. He then inspected the bearings to see if they were binding or loose.

“Once I know the rear wheel is okay, I move on to the derailleur and chain.” Scott pointed out how rusty the chain was on this particular bike. He measured the chain wear, and determined that it needed to be replaced. “Now I’m going to go through all the gears,” he said as he shifted the gears by hand to make sure there wasn’t an issue with the derailleur or cable. “If the chain falls off the cassette when I do it, the derailleur hanger is most likely bent.” He noted there was some corrosion in the derailleur, which was not surprising given the amount of rust on the chain.

Next, Scott took out a cloth, and sprayed some degreaser on it. He then thoroughly wiped down the entire frame, removing all the dirt and grime. Once he had finished, Scott inspected the frame carefully, looking for any cracks or other signs of defects.

After he finished the inspection, Scott removed the wheels and trued them. He plucked each of the spokes like the strings of a guitar as he slowly rotated each wheel on the stand. Scott explained the importance of making sure a wheel was true as he worked. “It prevents metal fatigue on the spokes. Even if you have one spoke that is slightly out of tension from the other ones, over time it is like bending a Coke can. You bend it back and forth enough times, the metal will break. Having even tension among all the spokes limits the possibility of one breaking.”

Additionally, “if you have enough metal fatigue on several of the spokes, you could potentially break the wheel itself.” Lastly, Scott stated that “truing the wheels helps identify damage to a wheel,” such as a dent or a crack that would not otherwise be apparent. According to Scott, wheels that are regularly trued can last the life of the bike.

After the wheels are trued, Scott finishes going over the rest of the bike, checking each cable for fraying or stretch, and each set of brake pads for excessive wear. For this particular bike, Scott needed to call the customer to tell them the bike needed a new chain, which was an additional cost. If the chain had still been good, he would have just cleaned and lubed it.

The value of a tune-up

For riders like myself who are on a tight budget, $75 is a lot of money. Higher Ground recommends riders do at least one tune-up a year, and potentially two or more tune-ups a year, depending on how often the bike is ridden and the types of trails encountered. I asked Scott what was the value of doing tune-ups.  He responded by giving a personal example.

“When I had my first new bike, I knew nothing about bikes. By the time I knew something about bikes, I realized I had destroyed my bike,” he said laughing. “The chain was worn way past where it made sense to keep running it, the brake pads were metal on metal, the whole drivetrain was shot. I had a cable housing that was starting to explode. All the things that, if you were checking it over, you would notice.”

Therein lies the value of a tune-up. “You are going to notice those things before they become big problems,” he said as he pointed out another customer’s bike that was on the stand. It was a high-end dual suspension bike. With the frame turned upside down, I could easily see that the shifter cable under the bottom bracket had exploded, and scored the carbon fiber frame. Ouch.

Scott further explained that tune-ups can also save riders money on labor costs because, in some cases, it is more expensive for riders to have a shop address issues individually rather than as part of the tune-up. For example, the customer’s bike he used for the demonstration needed both wheels trued, and needed both the front and rear derailleurs adjusted. If the customer had asked Scott to do those things individually, the labor costs would have nearly equaled the cost of the tune-up. If you then added on the additional labor costs for inspecting the bike, and lubricating the parts, the amount would have risen to $150 or more.

Things every rider should do between tune-ups

I asked Scott what non-mechanically-inclined riders like myself can do between tune-ups to help cut down on expenses. He emphasized the importance of keeping the chain lubed and checking chain wear on a monthly basis. “I equate chain wear to changing the oil in your car, and lubing the chain to putting gas in your car” he stated. “If you replace your chain before it completely wears out, you could go for 3 or 4 chains before you need a new cassette.”

Scott also suggested checking brake pads when you check your chain wear, so you can catch worn out pads before they reach the point of metal-on-metal contact. Additionally, Scott added it is important to clean your bike regularly to keep dirt and grime from building up on the components, but not to the extent that you remove all the grease and lube that protects those components. Finally, Scott encourages riders to bring their bikes to a shop whenever something feels a little off, so that a small adjustment doesn’t turn into a major repair.

Tune-ups are an essential part of mountain biking

Riders will spend thousands of dollars on a bike. Tune-ups ensure that the bike will last for many years to come.

While the cost of a tune-up might seem steep to riders on a tight budget, it is far less expensive to do on a regular basis instead of waiting until you have a major parts failure. If it’s been a while since you’ve done a tune-up, take your bike to a shop before something breaks. You won’t regret spending money on it. Plus, it will give you an opportunity to talk to some really cool people, like the staff at Higher Ground.

Special thanks to Scott Hulslander and Higher Ground Bicycle Company for their assistance with this article.

Richard Shoop
Richard Shoop resides in Tallahassee, Florida, where he first discovered mountain biking in his mid 30s. He enjoys sharing his love of the sport with others, and passing on the lessons he has learned.

Gear
Watch: The $50 Bike Repair Stand - Quality or Crap?
Repair
Watch: How to Install a New Chain on a Full...
Mountain Bike Podcast
Podcast: What's Grinding Our Gears and Stoking Our Spokes in...
Opinion
How do you Plan to Purchase Your Next Mountain Bike...

Beginners
How to Prevent Leg Cramps When Mountain Biking // Tips...
News
Bentonville Crowns Itself Mountain Biking Capital of the World™
Gear
5 Mountain Bike Chest and Back Protectors for Gravity to...
Gear
Lucky 13? We Put the New Rotor 13-Speed Hydraulic Drivetrain...