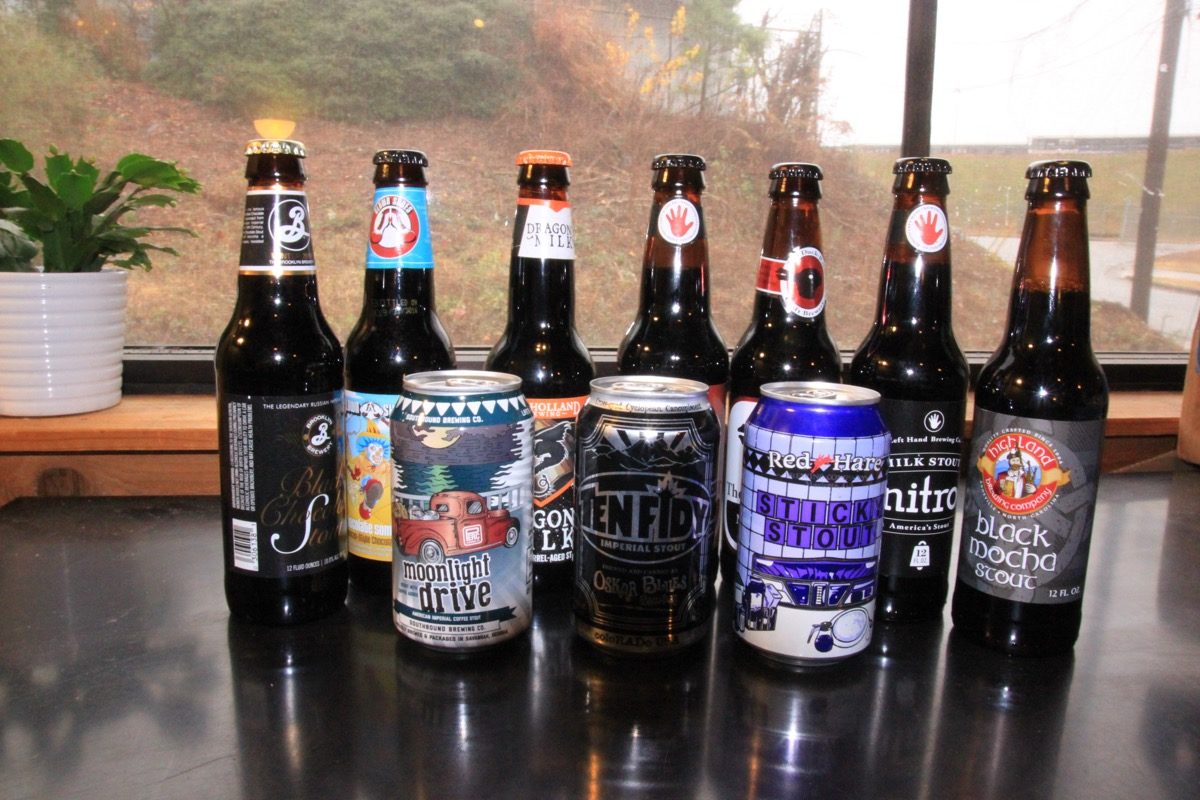 Editor’s Note: Singletracks neither encourages nor condones underage alcohol consumption, alcohol abuse, or excessive drinking. If you’re underage according to local law, choose to abstain, or just can’t stand when people geek out over beer, we ask that you choose another article to read–perhaps this one.

Following our successful blind IPA taste test earlier this year, we figured now would be a great time to taste different stout beers… you know, for science. For this test, we selected 12 different stout beers representing national, regional, and local breweries, and covering several styles of stouts including imperial, milk, American, Irish, and oatmeal. There were chocolate stouts, coffee stouts, and even nitrogen-infused brews. Everyone was tasting blind, except yours truly, though we did mess up one beer which I’ll explain below. My own rankings were not factored into the overall results. 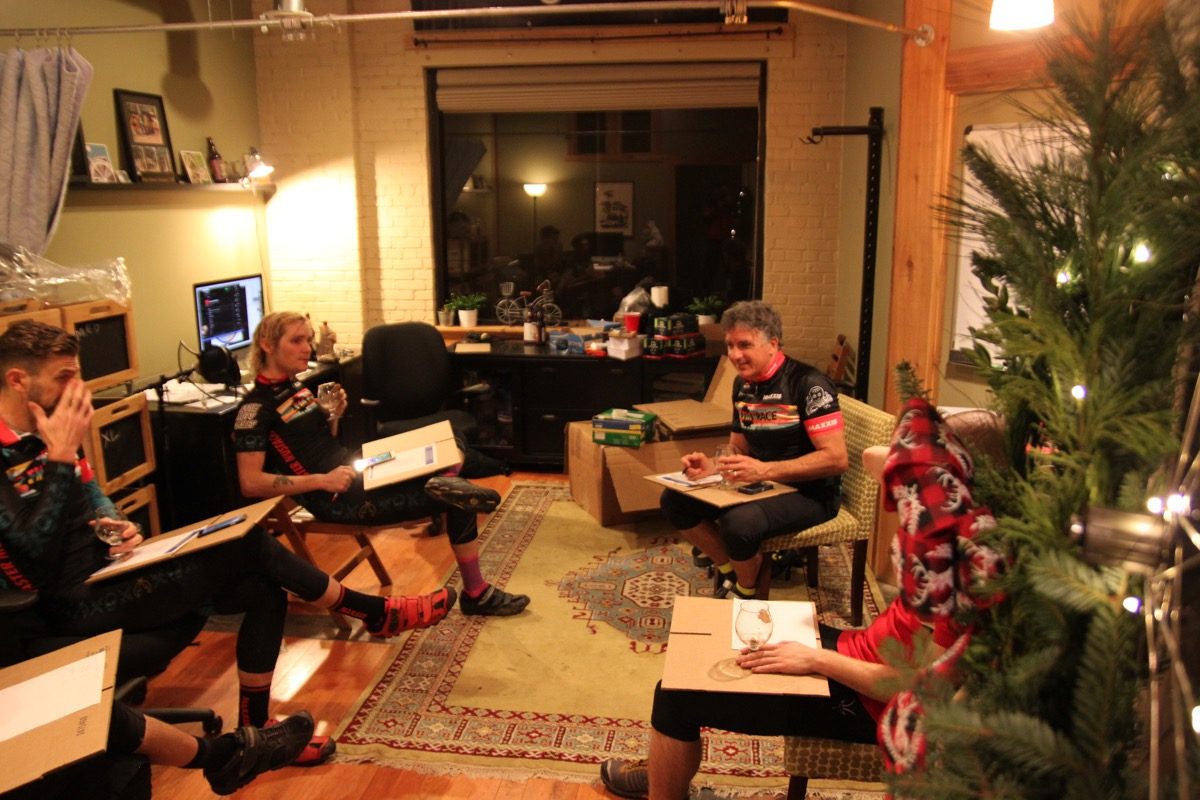 We conducted this test following a chilly, wet night ride, which IMO is the perfect situation for drinking stout beer. This is how the stout beers stacked up in our taste test, ordered from worst to first.

On paper, Left Hand’s Wake Up Dead Nitro has a lot going for it. For starters, it’s from Left Hand brewery which has made a name for itself among stout drinkers for its highly-regarded Milk Stout. To capitalize on this popularity, the company has seemingly produced countless takes on stout beer to slake its fans’ thirsts. In fact, Left Hand is the only brewery that has two beers in our test.

Not only is Wake Up Dead from the venerable Left Hand brewery, it’s also a Russian Imperial stout, a style which many drinkers regard as the pinnacle of stout beer.

Yet, our reviewers just weren’t that into this beer. It turns out nitro beers in general didn’t do well in our test (we found the same thing in our IPA test), and this beer in particular tasted a bit like medicine according to multiple reviewers. This could certainly be due to the high alcohol content (10.2%) in Wake Up Dead Nitro. Also, I didn’t really give a proper pour on either of the nitro beers in our test because I was trying to pour just the right amount each time. (The instructions on the bottle recommend pouring vigorously down the center of the glass.)

Our panel’s rankings of this beer were perhaps the most consistent among all the beers in our test, ranking 11th or 12th overall by all five of our blind tasters. 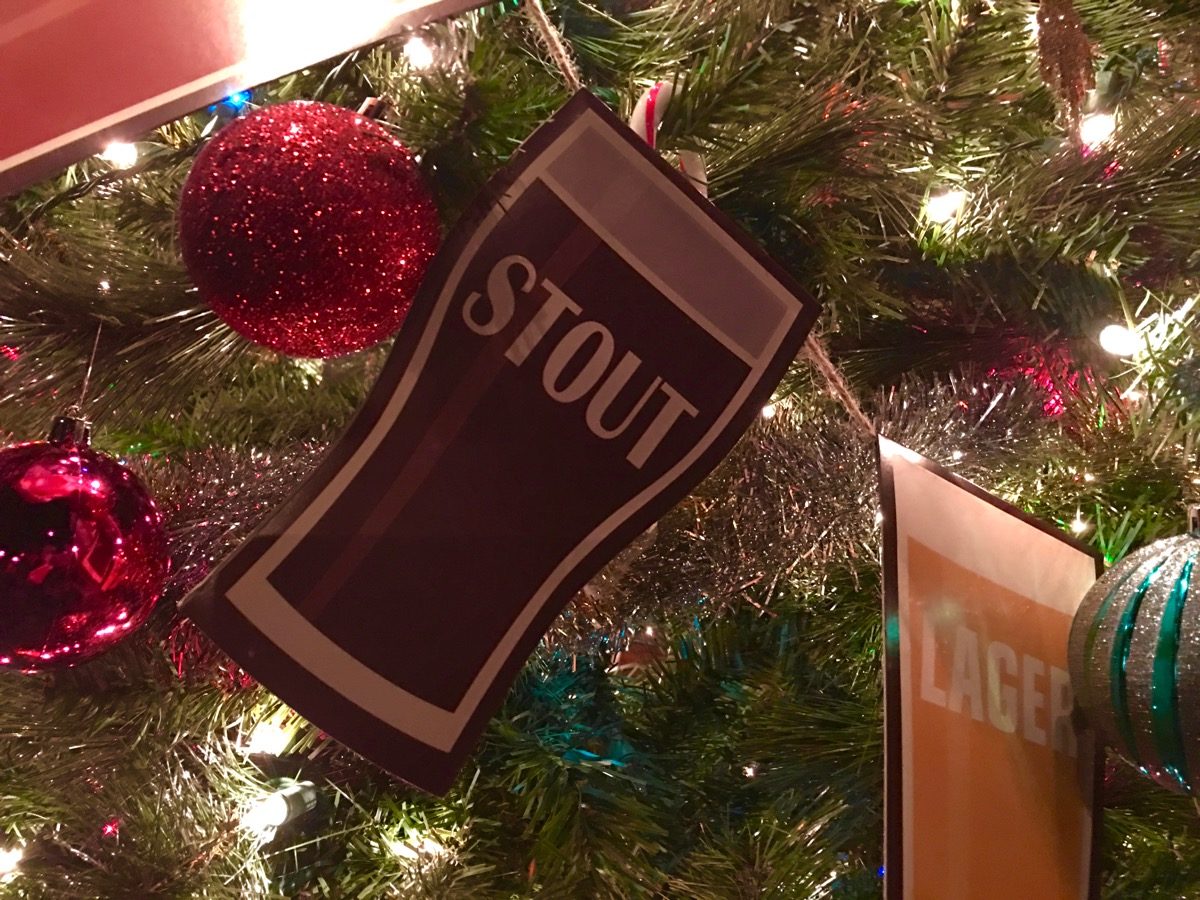 Had this test not been conducted blind, I’m pretty sure Red Hare Sticky Stout would have ranked even lower due to the name alone. Red Hare is a local Atlanta-area brewery known for its bland Long Day Lager, though I can recommend their SPF 50/50 IPA Radler and even Long Night Lager, which is coffee-infused. Anyway…

Sticky Stout was the only oatmeal stout in our test, and features a fairly mellow 6.3% ABV. One taste-tester said it tasted like cardboard while others noted it was sweet and malty. I personally ranked this one in my top 5, but then again, my votes didn’t count since I wasn’t tasting blind. 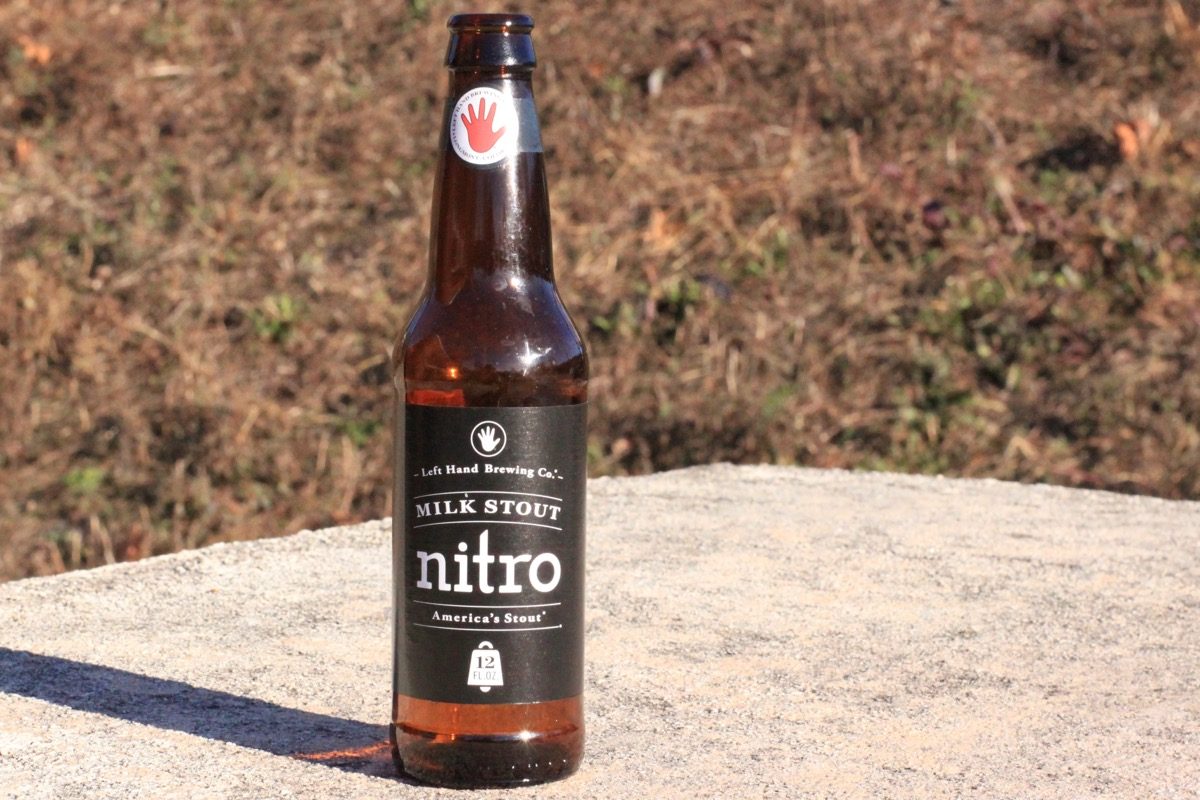 Poor Left Hand didn’t get a break in our test. The thing is, nitrogenated beer can be really smooth and delicious, especially when it comes right out of the tap. But in my experience, nitro beer in a bottle or a can just isn’t that great, and perhaps that’s why both Left Hand stouts ranked so low in our test (the improper pour could have been a factor too.)

This milk stout features 6.0% ABV and our reviewers weren’t kind in their descriptions: weak, flatish, watery, and light. Those last two definitely aren’t adjectives anyone should use when describing a stout beer! While two reviewers ranked this beer 11th place or worse, Chris K. ranked this one highly. Though to be fair, Chris K. made it clear at the beginning of the test that he doesn’t really care for stout beer.

Left Hand Nitro Milk Stout was the second to last beer we tested, which could explain its poor showing, particularly with regard to the adjectives used to describe it. However, our #1 pick overall was actually the last beer we tasted. Then again, it’s totally possible these guys have no idea what they’re talking about. Beer Advocate gives this beer a 91, which would place it 3rd among the beers in our test. 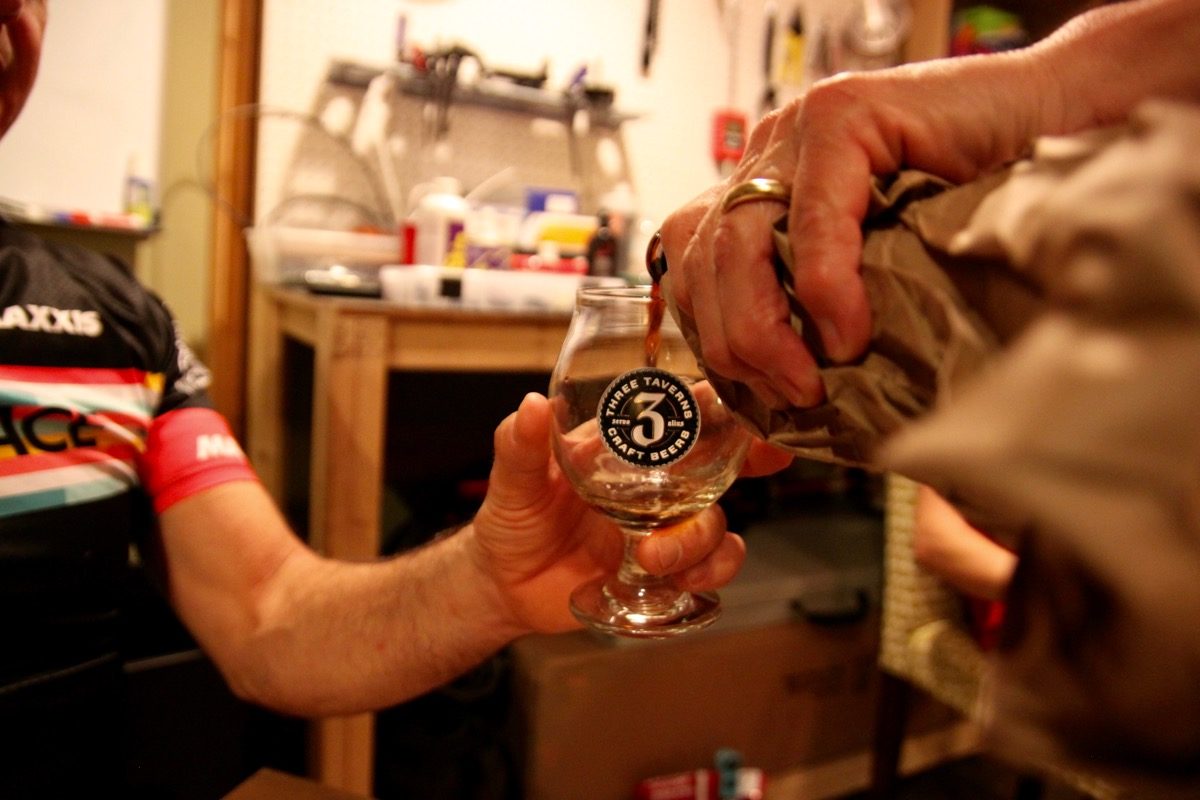 Dragon’s Milk packs the biggest punch of all the beers in our test, with 11% ABV.  It’s an American Imperial / Double stout, and according to the brewer, it has notes of vanilla and oak. Most of our tasters picked up on the barrel-aged taste and all noted how boozy it was. Personally, I was a big fan of this beer, ranking it second overall. Then again, I definitely go for the high ABV, barrel-aged brews whenever possible.

Three out of five of our tasters ranked this beer in 7th place, though that wasn’t enough to get it any higher than 9th overall.

Highland brewing is located in Asheville, NC, and the company is fairly well known for its Gaelic Ale. This stout is said to have a “very malty body with a large, roasted chocolate flavor” and 5.3% ABV. A couple tasters noted tangerine and citrus notes from the hops, though the panel couldn’t agree on whether the beer was flat or highly carbonated. I suppose we should chalk that one up to inconsistent pours on my part during the test. 🙂

I was personally looking forward to this beer the most since I tend to dig complex tastes. Clown Shoes notes this beer contains not only chocolate malts but also ancho chile, cinnamon, and vanilla. It’s a fairly boozy beer at 9% ABV, but that’s to be expected since it is an American Imperial / Double stout.

Most of our reviewers ranked this one in the middle of the road, noting coffee flavor (wrong!) and that the beer tasted semi-boozy. It should be noted there was a big jump in rankings between the previous beer, Highland Black Mocha Stout and this one. From here on out, the margins started getting much tighter.

Click below to continue on to our top picks!

I know, I know. I really like that one and wanted to include it…

Jeff, clearly I have to be a part of these in the future. Not that you did a bad job. It’s just, because, you know…

Also, an oldy but a goody I re-discovered the other day: Founder’s Breakfast Stout. A standard bearer of the stout style in my opinion.

Swing down to Atlanta and we’ll deal you in on our next test!

I would have loved to included Founders Breakfast Stout–such a great beer.