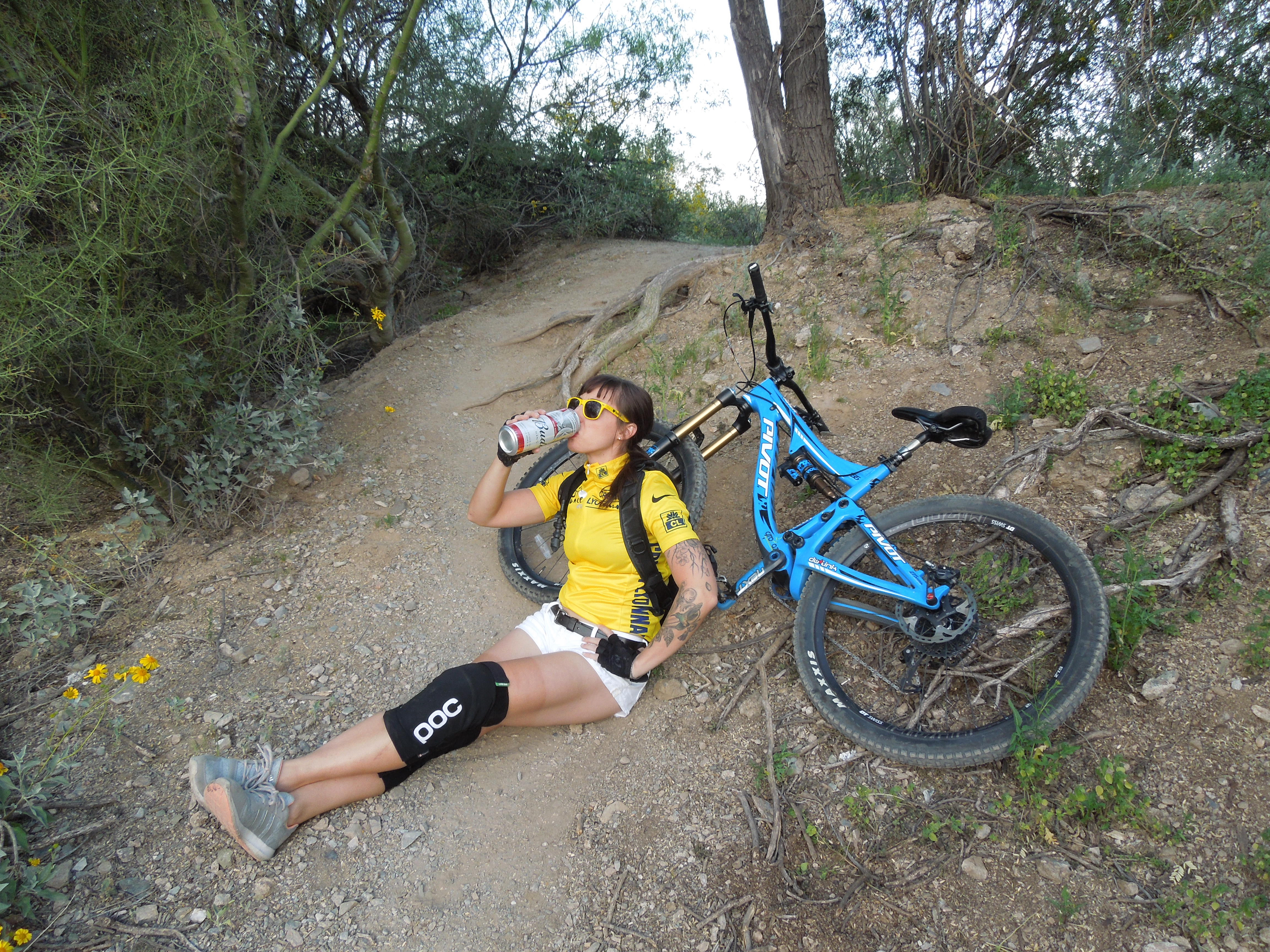 Y’all know what I’m talking about. Those “rare birds” on the trail, well… just taking up the trail, suspiciously lazy with no matchy-matchy attire. Terrible at their sport (and likely questionable at daily life duties), they are the Ronnie Mac’s of mtb, goonin’ all day long. No one understands why these exaggeratingly awkward riders exist, but when encountered, they possess the ability to make you cry like a Celine Dion song turned up to 11.

According to historical British etymology, the term “Jerry” stems from early 20th century English vernacular. During WWI, the Brits used the term as a dearly affectionate handle for the Germans–their helmets resembled the same shape as a 19th century chamber pot, which was referred to in Queen’s slang as a “Jerry” (similar to “loo” or “John”).

In similar fashion, the name is used to describe things that are poorly (or crappily) constructed, or a bloke who lacks clear, non-lazy understanding of how to perform. (“That dude is such a Jerry – look at how he’s zip-tied his bars to his stem!”)

You’ll notice them littered among many other modern-day athletic populations, to include skiing, motocross, and road cycling (often referred to as a “Fred”). Curious how they do it? Just follow the simple steps outlined below and you’ll be totally dialed.

Garbage in, garbage out, bros!

1. To fully emulate a Jerry with superb authenticity, one must achieve a balance between two important and foundational attributes: $6 worth of skills on a $6,000 bike. Let me stress… it must be THE bike. We’re talking at least 6 G’s – more is always better.

2. Do not remove the following items that come on your carbon steed, no matter what anyone tells you (this is very serious): plastic spoke protector/dork disk on the rear cassette, those cute lil black valve stem caps, and the rear, front, and in-spoke wheel reflectors. To comment further on the last part – bling is important. Everyone should be able to see how well you bodaciously shred gnar and Jerry the hell out of some whoops, especially at night.

4. To help emphasize your delicate musculature, wear a race-cut zip-up jersey with baggies (or skinny jeans à la #3 above). If you’re attending a shop ride, make sure your jersey has mail-order logos all over it. Some choose to pair this classic outfit with white socks, white shoes, and a white helmet. Perfect for your upcoming video edit.

6. To make sure everyone else in the area can hear you coming (see #5), never, never, EVER lube your chain.

7. The safest place to rest is in the middle of a trail or in the landing of a jump. These are the choice spots to open up a trail Budweiser and really take in your surroundings. Totally zone out, meditate, and appreciate your impeding interference with everyone else’s flow.

8. Make sure you always look just in front of your front tire. Better yet, just keep your eyes on the tire, or even the stem if you really start to feel unsafe. Why look down the trail at all? You might hit that giant rock or hole right in front of you and taco your wheel. No one likes compromising their own stoke. Even worse, you may not see another rider coming the opposite direction – Refer back to #5… come onnnnnn.

9. Ensure your elbows are always locked. Straight arms are strong arms. A great time to practice this technique? When you’re cleaning some tree roots or a small set of drops.

10. Who needs a rear brake when attempting to clean some steep-ass descent? Pffft… not a Jerry. Squeeze that front brake lever HARD… I promise you’ll get all the attention you’ve never thought to ask for. Remember: skidding is rad. Skidding uncontrollably is radder… and the only thing radderer is going OTB, guaranteed.

11. For the ladies: “Boobs to bars” has nothing to do with bike handling skills. (This idea can also be applied to those with moobs, however, a word of caution: you’ll probably be drinking that ice-cold Budweiser alone.)

12. For those late afternoons you just don’t wake up early enough, you can always ride in gym shoes or flip flops. And forget a helmet: there’s no time to waste when you’re wasting time. 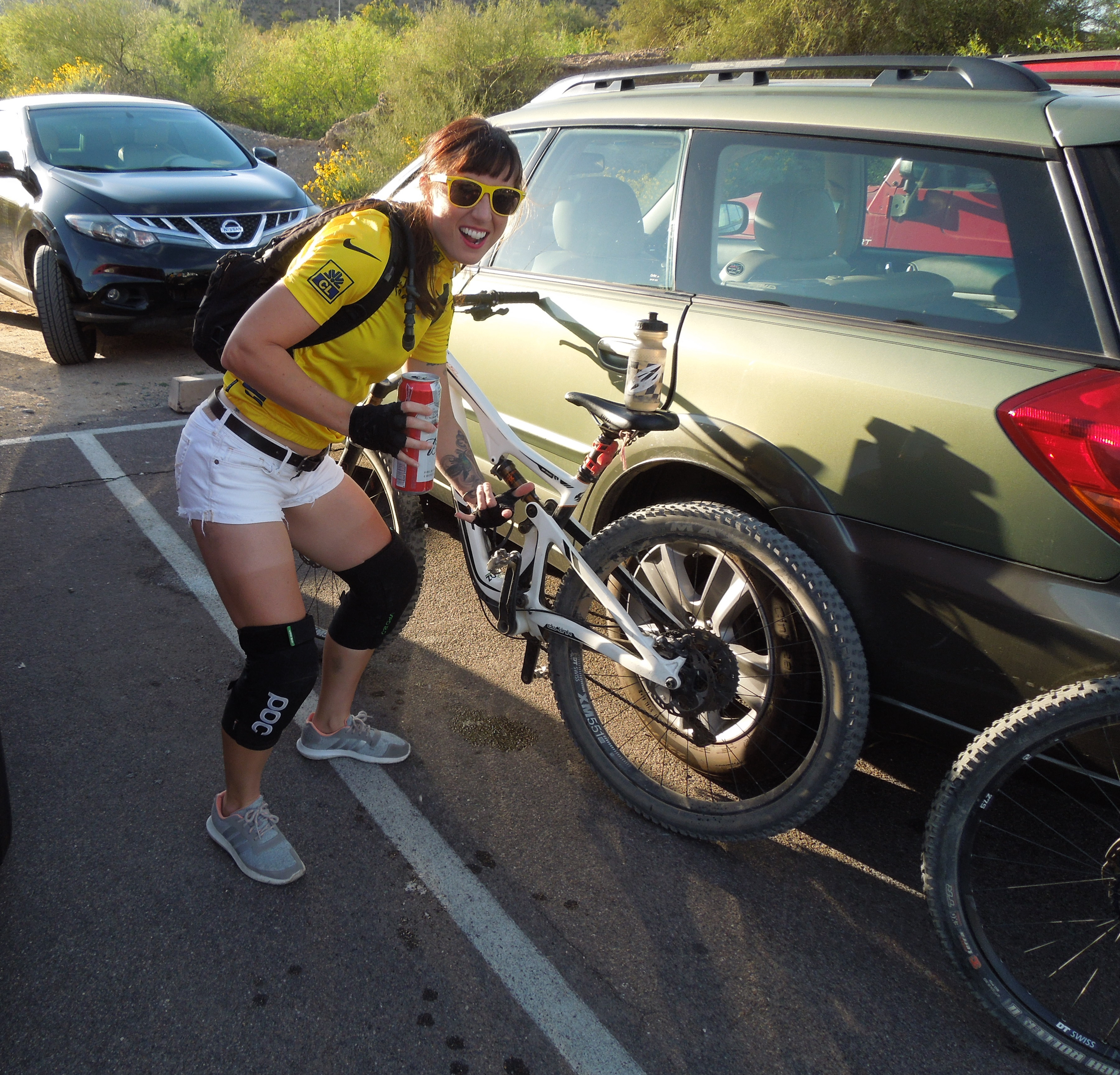 Jenny Kukral
I am a professional scientist, biochemical exercise physiologist, USA Cycling coach and lover of all things mountain biking. I am dedicated to delivering the most current, science-backed knowledge to coaches, athletes, and anyone that is curious about their health and training. And, much of what I do is appropriately mountain bike biased - live your life!

I’m 60, I’ve moved away from my road bike because of being taken off the road by a truck mirror. They never even stopped. So here I am just getting into MTB. I love the trails, yes I’m slower than many. If I’m in your way my apologies. When I crash I may be slow to get up, but I’m living in the moment that I’m having fun and didn’t break anything. I’m hoping for the most part this article is written in fun. I’m working on staying happy and healthy. Cheers all

Pockets do rule! I wear them all the time for the same reason – breaking my own rules, ha. Cheers!

The comments are almost funnier than the article.
Lighten up.
My dork disk is still firmly attached to my bike, and I hardly ever snack in the middle of the trail ????

Who’s the “Jerry” when you have to hike-a-bike 10 miles out, dragging your wreckage behind you because you clipped a rock and didn’t notice. You were shifting into granny for that grueling climb ahead and BANG!!!, your rear wheel has eaten your chain and rear mech because you removed the dork disk.

I say, come as you are, but please do be considerate on the trails.

Funny stuff right there, Jenny. It’s great that we can make fun of ourselves but weird that people are so touchy about this. Taking ourselves too seriously, I see.

I wrote one time here on Singletracks about five time national champion Cameron Chambers, one of the nicest guys you’re likely to meet on the trail or, say, at the grocery store. Just a regular dude with enough built-in badass to totally crush it on the bike.

He used to show up at races in a pair of coveralls cut off at the knees and just wail on people while riding a rigid, singlespeed Karate Monkey. I think this was his way of saying that mountain biking is supposed to be fun and that people were taking themselves far too seriously.

All that to say, I know what you’re going for and I think it’s good fun. Cheers.

The post does sound elitist although I realize she was just poking fun in a satirical way. I ride a nice bike and i’m overweight and not in the best shape of my life, but enjoy the quality of a nice bike and groupo. I have paid off my student loans and can afford a nice bike so, I think I deserve it. Realize that is was probably sold to me, and many of these pricey bikes ares sold by the same people who have this same view as the article. So, really you can’t have it both ways. Up sell us the expensive bike and crazy clothes, then make fun and look down on us on the trail. That guy (person) your making fun of just might be your lawyer, nurse, judge, sheriff or ER doctor you will be running across later in your time of need. After all those expensive bikes aren’t going to buy themselves.

Some of the tips are well understood and need to be out there. I’ve have heard of cyclists getting hit by cars, suing and because they did not have their reflectors on, they were held at fault. I realize we don’t need them on the trail but perhaps some of the bikes are ridden to the trails or in town too.

Just my 2 cents worth. Enjoy the ride.

Been riding for over 20 years and have seen a lot of changes out there, mostly good… For those that choose to ride I have only a three things to say.
1. Stay safe, always wear helmet and gloves… got the scars to prove why!
2. Be courteous, exercise should be a by product of having fun on your bike not the most important part!
3. And whatever keeps you riding even if one day you have to do it on a three wheeled bike at 90, don’t worry about the elitists, live in the moment!

FYI: “Jerry” is usually used for skiing, “Joey” for mountain biking, and “Fred” for road cycling. Great article though! I’m guilty of the reflectors, however, they look GNARLY on my $400 hardtail! On my local trail, I hit all the jumps and drops, some over old, rusty cars, and some 8-10+ foot drops, while people whose bikes cost 20 times as much as mine ride past and hit nothing. Who’s the real jerry/joey there? 😀