Well, I can cross another one off the bucket list! Finally, on the last day of skiing at Snowmass for us this season, we hiked up to and skied down the Hanging Valley Wall. 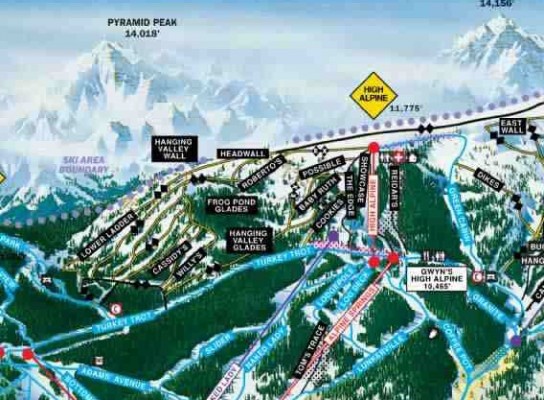 The Hanging Valley Wall section of Snowmass is a gated hike-to area accessible via the High Alpine Lift.  It is considered “extreme” terrain and shouldn’t be attempted by anything less than a strong intermediate skier.  The terrain is steep, and there are sections of steep glades and cliff areas too. On the map above, the Hanging Valley Wall is located just below Pyramid Peak.

Sunday was a rare perfect day at Snowmass, as far as weather goes.  It was a bluebird day with temps in the high 30s/low 40s, and there was almost no wind.  For Snowmass to have a day with no wind seems… almost unheard of.  It seems like every time we’re there, there are gusts above treeline in the 30-40mph range. Still, we weren’t going to take this day for granted! We skied a few warm up runs on Sam’s Knob and the Big Burn, and then headed over to Alpine Springs.

To get to the High Alpine lift you have to first ride the Alpine Springs lift.  The High Alpine is a fast-moving double chair with a center pole.  So, when you slide out to get on the chair, look to the middle!  At the top of the lift, slide off straight, and the gate for the Hanging Valley Wall will be right in front of you. The steepest part of the hike is right here; it mellows pretty quickly too.

The hike up to the next gate probably took about 10 minutes.  From this gate, you can head left to access runs like Possible and Roberto’s. Roberto’s is considered the “easiest” entrance from the top of the wall. 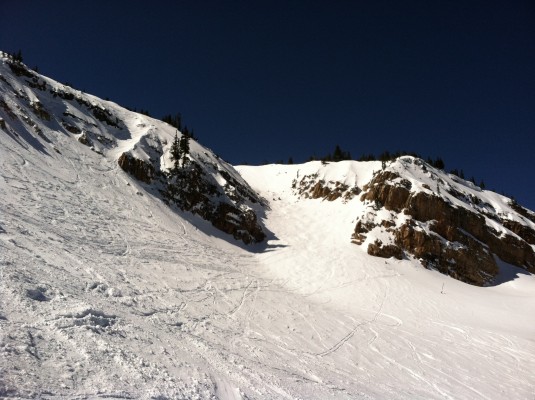 This shot was taken looking towards Roberto’s from where we entered, on the wall.  It is fairly wide, but Roberto’s seems to get skied off quickly.  It looked icier than the soft, powdery entrance we found.

There aren’t any signs here, so by the time we went through the second gate and put our skis on, we realized Roberto’s was behind us.  I could see the entrance, though, and it looked intimidating.  All I could see was a steep drop in and rocks. I was already nervous, and seeing that didn’t help matters. We decided to ski out a little further onto the wall and drop in.

Every year when we go to Snowmass, we’ve looked up at this area from the parking lot, the bus ride, the Elk Camp lift… we’ve pointed out various entrances and where we’d like to exit… but we’ve never skied it.  One reason is that we wanted to wait for a good snow year when there would be plenty of coverage. The other reason is that we just hadn’t gotten up the nerve to explore it yet… but now, here we were! 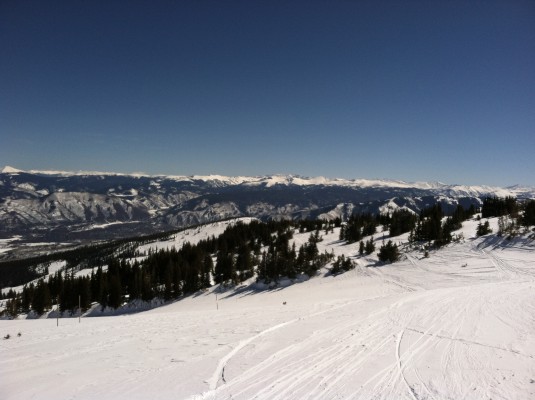 This is the view from the last gate at the Hanging Valley Wall.  You can see tracks leading down the ridge top.  From there, people take various entrances to the left from the Headwall all the way out to Adios Ridge, the last place to drop in. In the distant center you can see some of the Elk Camp area. (Roberto’s is behind me.)

After skiing along for a few minutes, we saw a group of people at the top of an entrance area and figured, “well this one is probably as good as any.” At the top, all I could see were three giant bumps in various places and a “closed” sign to the far left indicating a cliff band.  I couldn’t move. I just shifted my eyes around thinking, “where in the world do I go? What’s down there?” I couldn’t see anything beyond those three bumps! There were trees on either side of me, so I couldn’t really get an idea of the rest of the area around me, and every image of this wall that I’d ever seen went right out of my head.

My boyfriend just went for it. When I saw him heading in I said, out loud, “Oh… oh ok, you’re going for it.” He really left me no other option, which was a good thing.  I was left up top with one other guy who told me he’d skied this the day before.

“Just slide in and make like three really wide turns,” he said. Before I knew it, I was moving.

I could hear my boyfriend shouting encouraging words from below: “you got it! You can do it!”

I slid from the center to my left.  I was eying a nice bump over there that I knew I could easily turn around. I kept my right arm out, ready to make the turn. Honestly, there were no thoughts in my head.  It was like I was on autopilot.  I just knew what I had to do. Once I made the first turn, I could see that this wall stretched way out in front of me.  I could make as wide a turn as I wanted!  Heck, I could traverse 100 yards before I made another turn!  I didn’t, but I could have.

Yes, it was very steep and the entrance was intimidating, but once we got down it, I was able to say, “Oh, well that wasn’t that bad.” 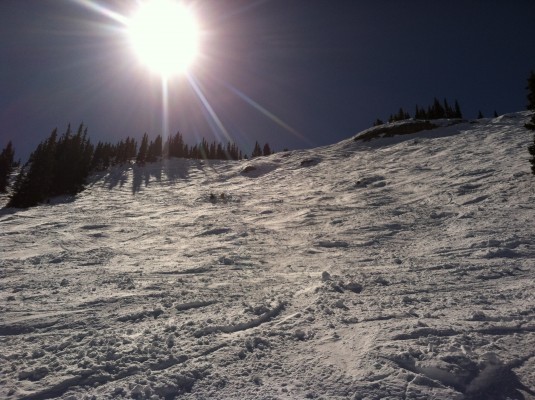 Looking back up at the entrance, I turned around a bump just left of the cliff band on the far right in the photo.

From here, I’d really recommend taking the high traverse over to runs near the Lower Ladder.  On Snowmass’s larger map, there is an inset of the wall and it lists runs over that way called Big Spruce and Wall One that aren’t quite as steep.  We ended up in the Frog Pond Glades and got dumped out onto a steep face near the Glade Two/Willy’s area.  In this part of the run, we ended up using all our ski techniques, from traversing to side-slipping and, at one point, almost a kick turn!

If you’re going to head up to the Wall, do it on a nice day.  You don’t want to be dealing with steep pitches and wind, biting cold, or a blizzard. For advanced skiers, this is definitely a great area to explore.  Even better, once you finish you get dumped out over at Elk Camp, where you can celebrate your latest adventure with a beer on the deck of the Elk Camp restaurant.  We definitely did!

We finished out our day with some of our favorite, but less-used runs, like Sneaky’s Glade and lower Slot. Snowmass is a great mountain to explore with plenty of runs for skiers of all levels.  If you get the opportunity, check it out! 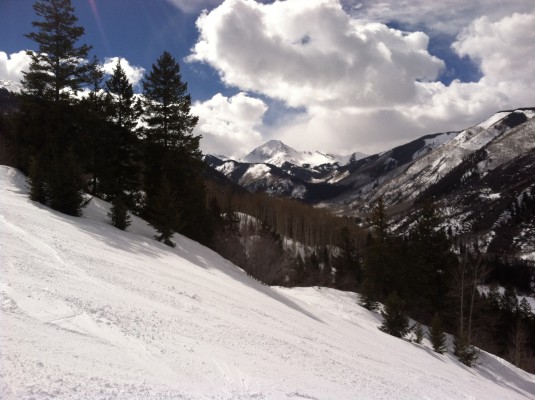 This view of Capitol Peak was taken from the lower Slot run. Clouds often obscure the top of it, but on Saturday we were able to catch this great view of it.

The hanging wall is awesome! Along with Highlands Bowl at Aspen Highlands, that was the highlight of my Aspen trip in 2004.