I lived in Lima, Peru from 2001 to 2009, and I have to say that the MTB scene is a billion times better now than it used to be. However, a billion times something close to zero remains something close to zero. A few minutes in Lima makes you appreciate what you have back at home. No matter what issues you have with anti-cyclists or motorists, it’s nothing compared to what Lima pedal mashers have to contend with.

I love Lima despite the fact that most tour books say it should only be used as a hub for catching a plane to Cusco. The food in Lima is unmatched, and there is a delightful lawlessness that makes the city feel like a massive playground for adults.

Lima is not the type of city you’re going to want to explore on a $2,000 bicycle. Heck, even a $500 bicycle is probably pushing it. The cyclist relationship with traffic is not the entitled fury you see from motorists in the US (who grumble a lot but mainly don’t do more than post passive aggressive memes on Facebook). In Peru traffic laws are viewed as guidelines, and I’ve been hit by cars multiple times just walking around town.

Back in 2007 I purchased a second-hand Goliath for $30 that a guy had managed to restore to functionality using discarded lawnmower parts. I rode that thing from the Ovalo de Miraflores to Plaza San Martin and gave the bicycle away the minute I arrived. The route I took required me to go through several round-a-bouts and it was there that I discovered the local traffic norm was to ignore the lanes and cut as close as possible to the middle of the round-a-bout before exiting. This required vehicles to cross through a meat grinder of hurtling metal. When I finally came bouncing into my destination, they had to pry my white-knuckled fists from the handlebars. I’d snapped both break cables.

Bearing that experience in mind, you can imagine my surprise when I arrived in the upscale district of Miraflores a few weeks ago and discovered a bicycle path! 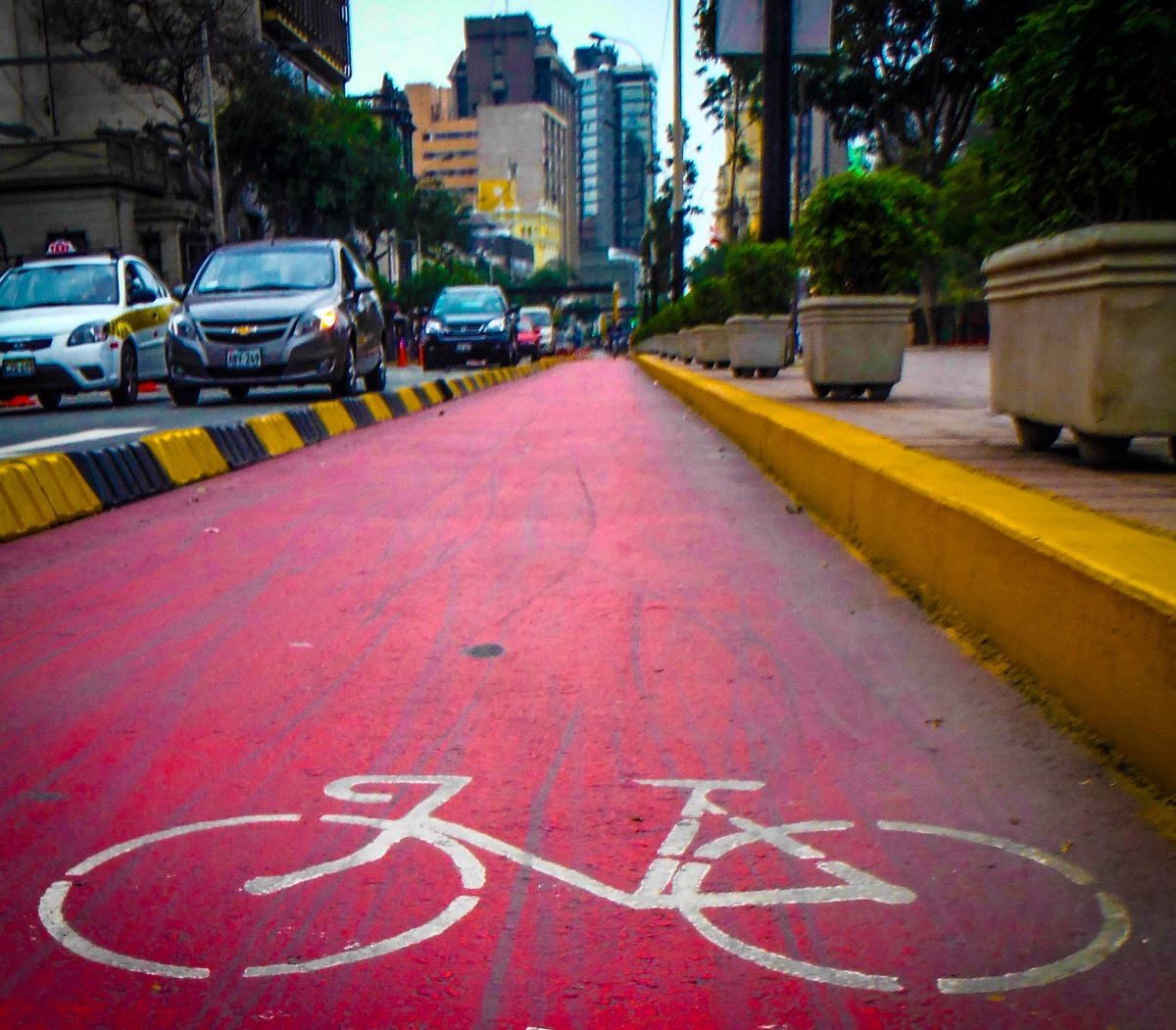 Over the last few years, Lima has made a huge investment in bicycle infrastructure. This is a city with a surging population, and the influx of new vehicles has made driving an absolute nightmare. The hope from the bicycle paths is that it might ease some of the traffic demands. Though the bicycle concept is still in its infant stages here, there are a lot more bicycles around than there used to be. 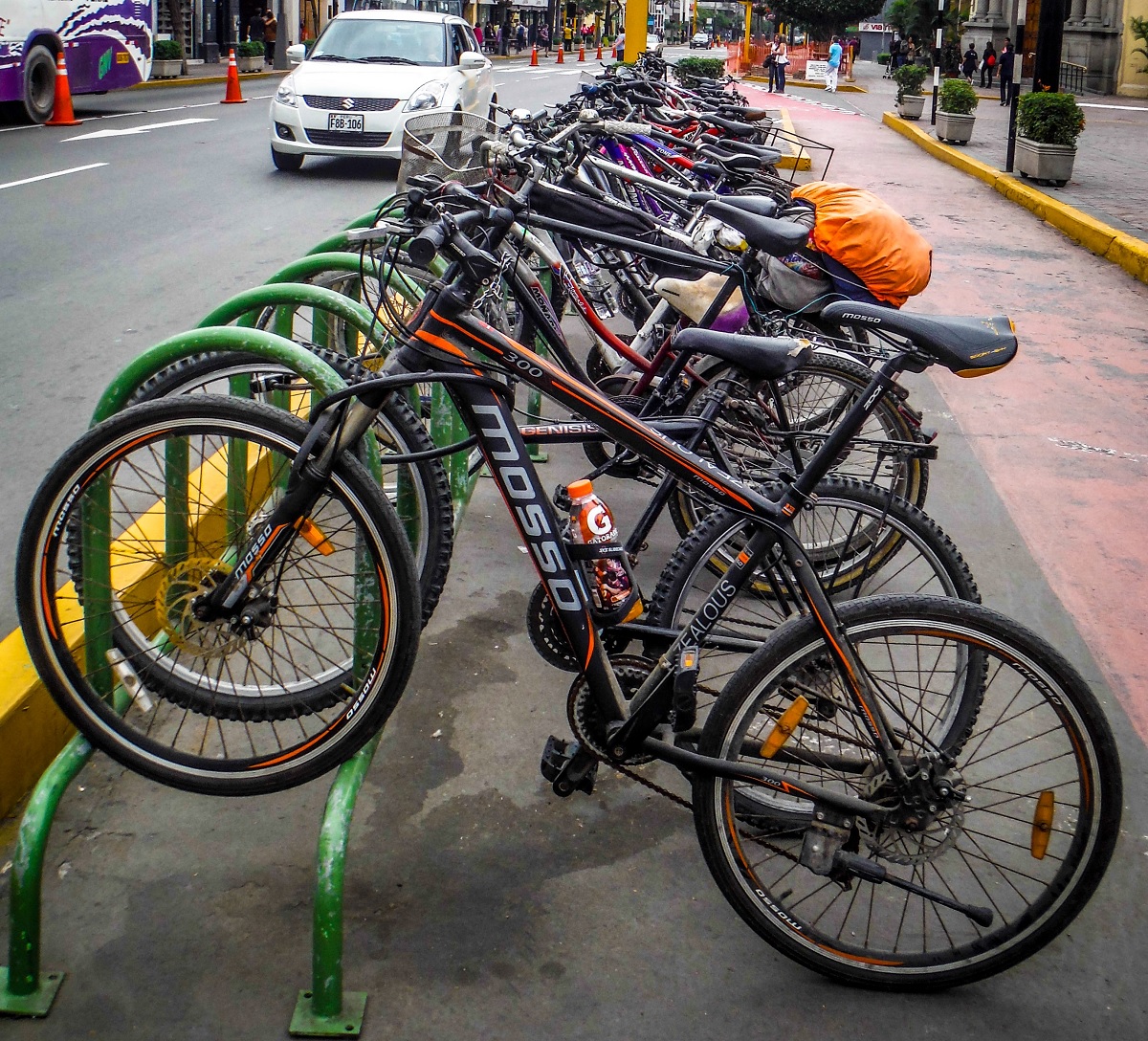 From my perspective, throughout the majority of the week the city remains unrideable. However, on Sundays the municipality shuts down one of the main roads and encourages cyclists and runners to take advantage of a day of exercise.

This is pretty much as good as it gets for cyclists in Lima. If there’s singletrack here I haven’t found it yet, but the rumors I’ve heard suggest there are trails to be found in places like Lunahuana south of the city; also Cusco’s sacred valley is one of the most spectacular places in the world to do any kind of physical activity.

If you’re in Lima jonesing to get in the saddle, your best bet is to head to the Ovalo de Miraflores on a Sunday morning when Specialized has their rental tent set up. 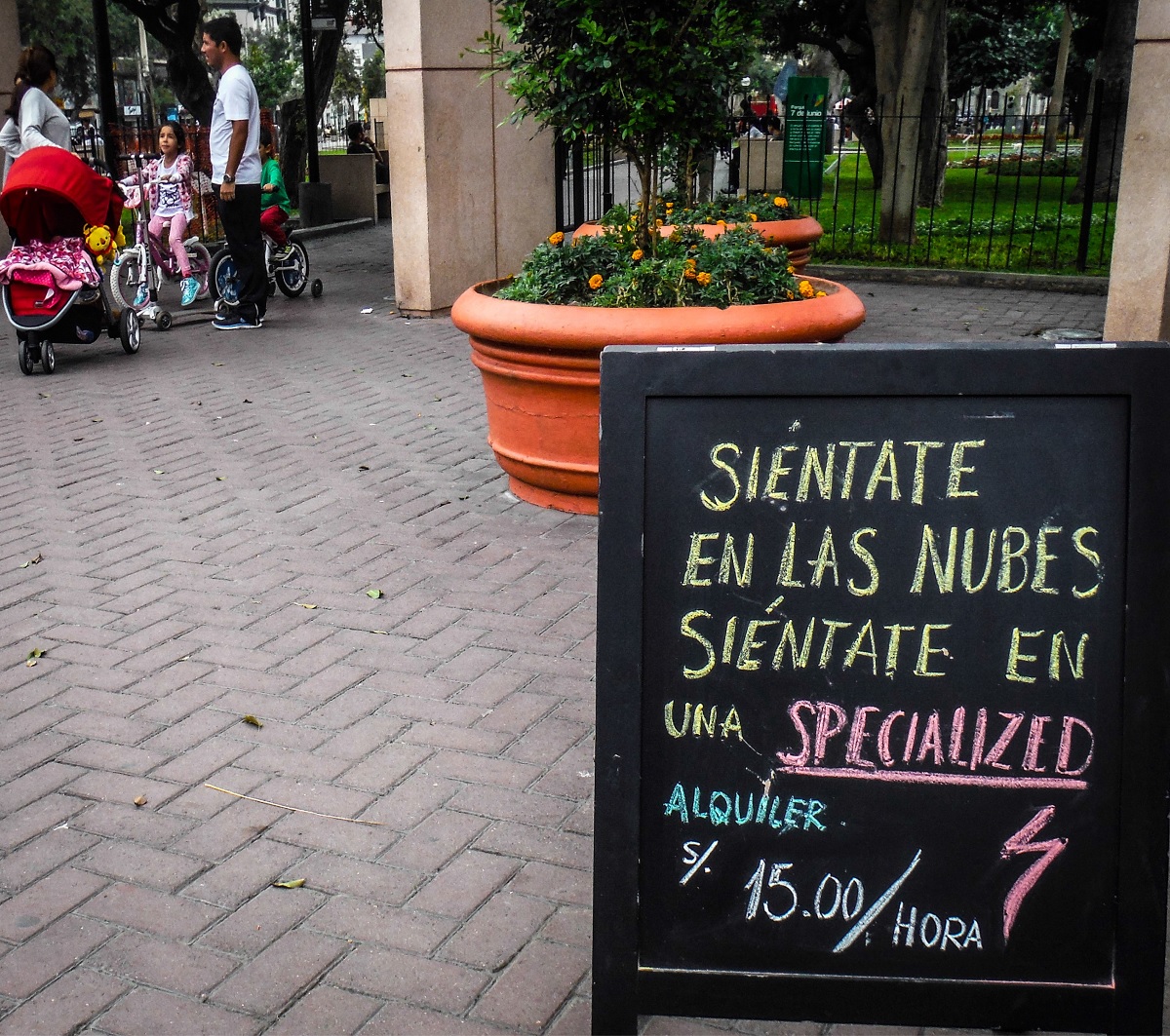 The sign says “Sit in the clouds, sit on a Specialized,” and the charge is about $5 an hour. I’ve ridden bicycles for a lot of years, and I’ve never referred to a saddle as “sitting on a cloud.” 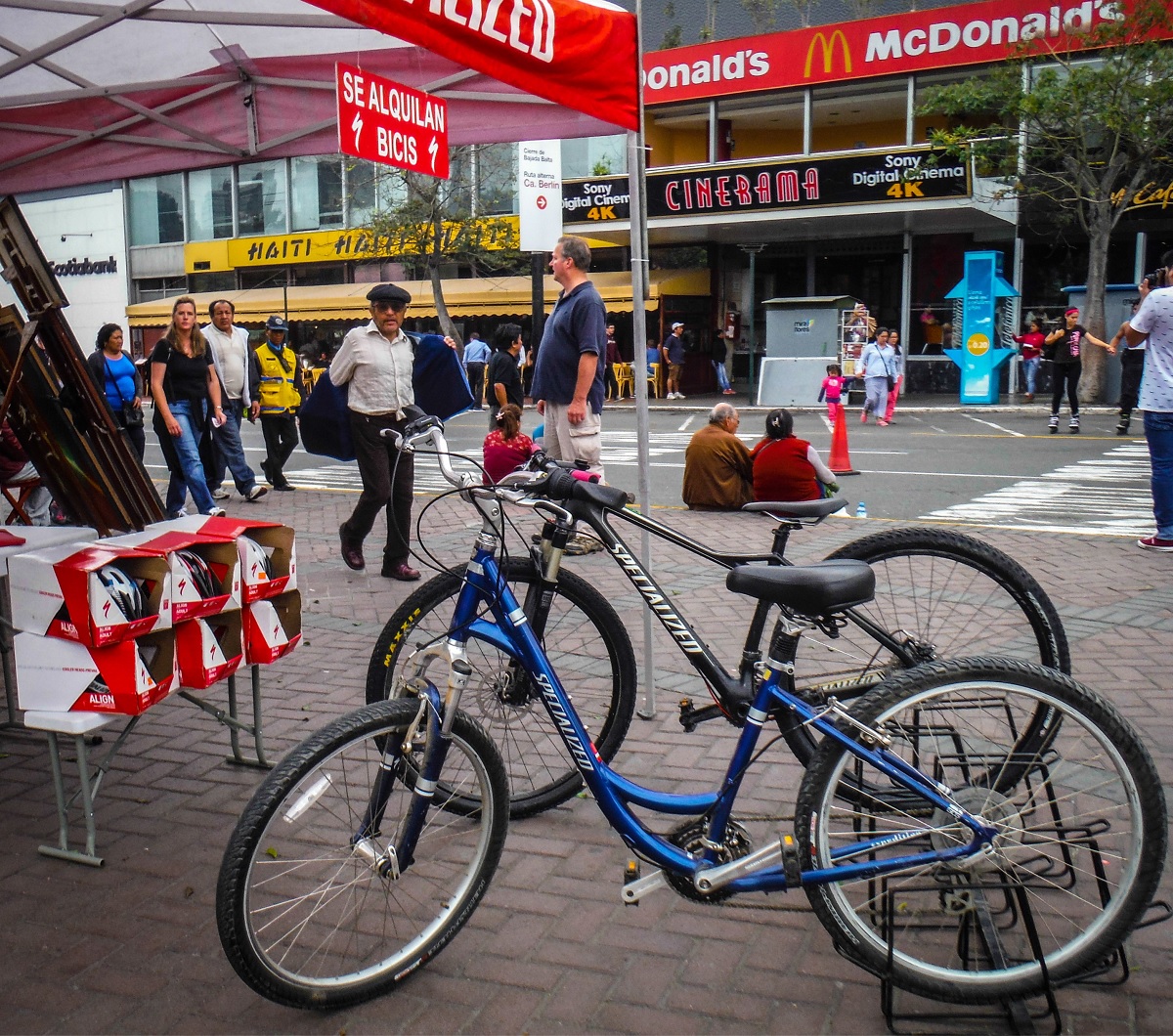 This is only on Sundays, but the event does seem to draw a lot of sport enthusiasts out of the woodwork. You still have to somewhat contend with traffic, though. 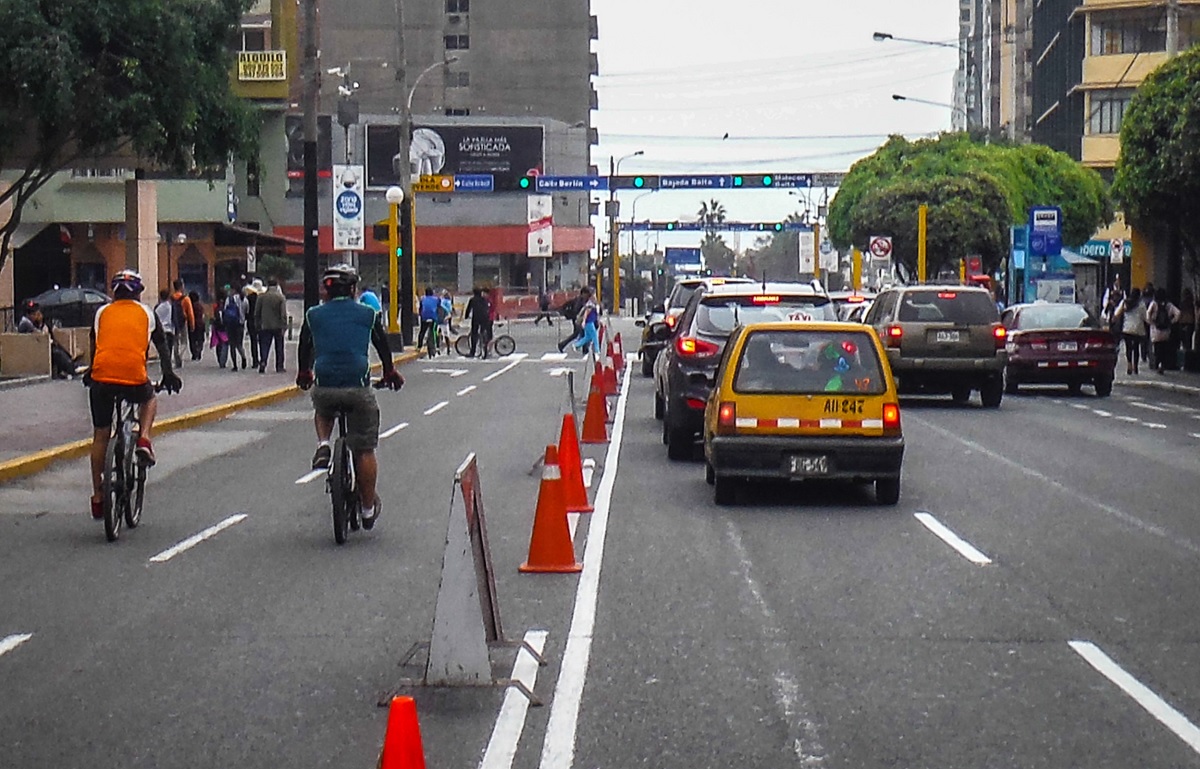 Lima represents a unique problem for the cycling community. I applaud the efforts they’re making here to create a more bicycle friendly environment, but it’s hard to wrap your mind around any kind of long term plan. The traffic is simply too crazy, and I haven’t even seen any sites that could be turned into functional singletrack courses.

It’s a shame, too, because the potential for bicycle tourism in Peru in general is huge. This is a fantastically-beautiful country, and the climate is perfect for riding. This is going to be one of those situations to sit back and monitor. Perhaps 20 years down the line, Peru will be one of the premier cycling destinations in the world. I hope so!

Comments and suggestions for what might be done to improve the Lima cycling scene are welcome!

Thanks for sharing this insight into MTBing in Peru, Walter! Sometimes you have to know where NOT to go when choosing your next trip 🙂

Lima is a little dry, but I’m sure there are plenty of locations for epic riding elsewhere. Somebody just clued me in to Morro Solar which is down in Chorrillios, so I’ll go check that out next!

Can’t wait to read about it!

Greg! Lima as city is probably not the best place to ride mountain bike in Peru. The nearest trails to the city, are fine to train but not to have fun or an incredible experience. I think also that not many cyclists adventurer them self to highlands of Lima. However from those who did it, I have heard stories of the mountains in Lima that sounds really epic, but really hard to get there. Lima is full of potential as Walter said. Just it needs hard work. By the way, I highly recommend you my hometown Cusco to ride bike, it’s a wilderness bike park. Check this article I wrote at beginning of the year http://enduro-mtb.com/en/local-heroes-cusco-the-incas-are-gone-but-the-trails-remain/
Hope to see you in Cusco

If you are talking about Mountain Biking, Lima has possibly one of the longest and best trails on earth. Olleros, it is a 3500 meters / 12000 feet of vertical drop on a 56 km / 30 miles ride of pure and sweet singletrack starting at the top of the Andes and finishing at the shores of the Pacific Ocean.