Mountain biking is currently in the throes of an identity crisis. This isn’t exactly news, but has rather been an ongoing issue in our sport for many, many years. But I think that soon, very soon, this brewing issue is going to come to a head and will, unfortunately, boil over the top of the kettle.

This identity crisis is neatly summed up by a meme shared by The Robert Axle Project, which utilizes a data point from a recent a Singletracks.com survey: 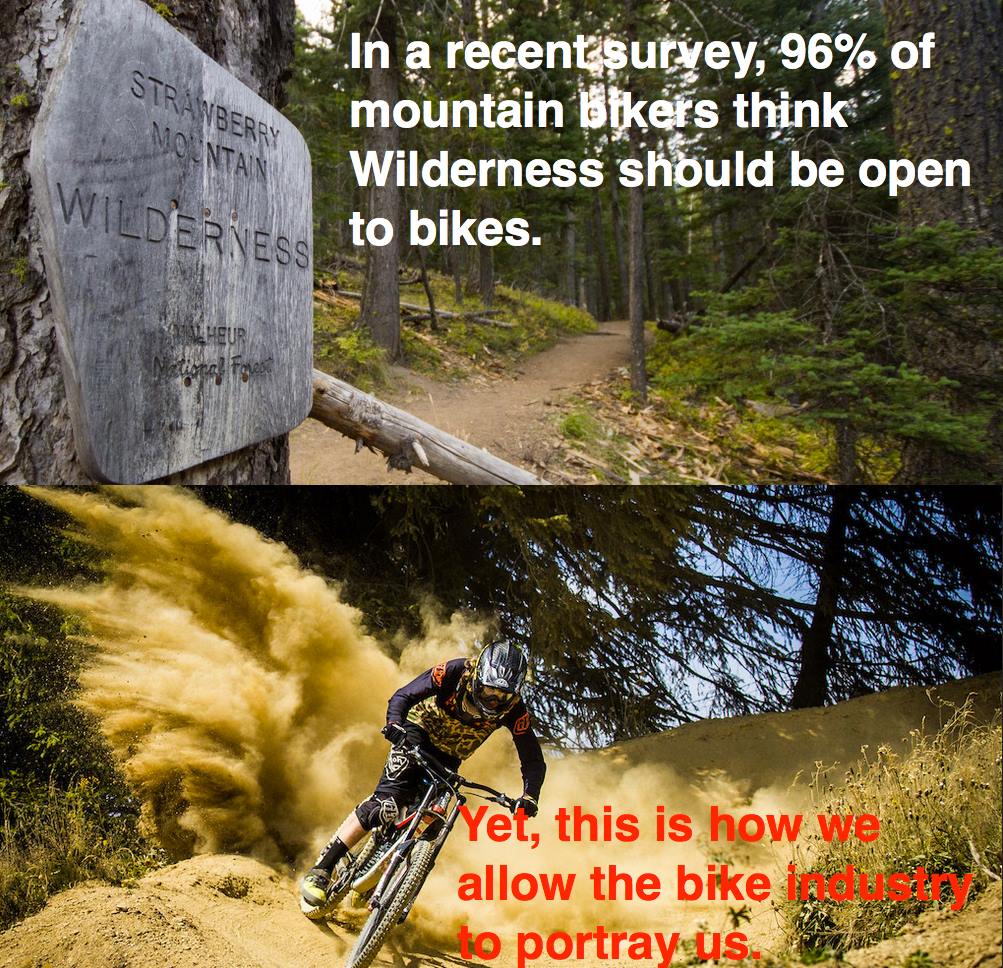 Let’s start with the portrayal of mountain bikers as skidding, dirt-slashing, back-flipping, jump-building vagabonds. Because really, that’s how 99% of the videos, photos, advertisements, and generally any sort of media portrays mountain bikers. Consequently, we’re seen as an attack on the land, a curse on the environment, and Red Bull-swilling nut jobs that only want to go as big as possible, broken backs be damned.

The thing is, how many of us actually ride like that? How many of us are backflipping 50-foot gap jumps and slashing loose dirt turns down the side of a mountain in the Utah desert?

Heck, let’s make it really simple: how many of us even so much as drift our rear wheels around the corners of our local trails? That’s actually more doable by the average Joe, but for the vast majority of us, we respect our local terrain, and we respect the work that it takes to build and maintain the trails—probably because we actually help to build and maintain said trails.

So if that’s not what most mountain bikers do, then how exactly do they ride? I think if you talk to most mountain bikers and take a poll, you’ll find that while they enjoy the thrill of going down hills and some enjoy the technical challenges of rock gardens and getting airborne occasionally, most riders aren’t schralping berms, or freeriding down a slope in Virgin, Utah. Instead, while they do want to challenge themselves, part of that challenge is the difficulty of the climb, and the endurance that it takes to reach a place. And much of the reward is enjoying the views along the way–the beauty of the natural places that we ride through.

Now, it would be the easiest thing in the world to simple condemn the berm-slashing, gap-jumping, death-defying mountain biking as unconscionable, unethical, and something that should be ripped from our sport. The other easiest thing would be to embrace it and simply say, “well yeah, mountain bikers ARE trail-eroding, stash-poaching vagabonds—have you read about our weed-smoking history recently?!”

But here’s the thing: taking the easy route is rarely the answer. And as such, condemning this type of riding outright isn’t the answer either. Because all of these types of riding—the gap-jumping, back-flipping, and the endurance-climbing, view-perusing all have their places.

Simply put, if you’re going to be gap-jumping and berm-slashing, the place for those activities is in areas designed and intended for them. Such areas include resorts with downhill and freeride features that maintain and take care of their trails for just such a purpose, and private property that is intended for such a use case (think: Red Bull Rampage).

Oh, you didn’t know that Rampage took place on private property owned by Red Bull, but rather thought that it happened in Zion National Park? That’s just one more example of how the portrayal of these types of activities plays against environmentally-conscious mountain bikers that want access to wild areas. Instead of advertising that this competition takes place on privately-purchased land, Red Bull instead plays up the proximity to Zion National Park, sometimes simply referring to the area as such. When, in reality, it just isn’t.

Despite what you may have seen in films, a backcountry trail on public land or a seemingly-unused hillside is not the place to be slashing turns or building jumps. Rather, we need to respect the land, and follow Leave No Trace principles as we pass through these natural areas.

So the question then arrises: well, is there also a place where the aerobic, nature-loving version of mountain biking doesn’t belong either? The diehard nature-lovers might argue “no,” but I’m actually going to argue “yes.” Your local downhill track is not a place to be going for a long, aerobic climb. Don’t be climbing up the downhill trails at your local resort! Similarly, don’t ride down those trails, stop, and chill out in the center of the track. They’re intended for fast, hardcore, downhill riding–if you’re hanging out in the blind landing of a jump and you get hit, injured, and/or killed, that’s your fault–not the rider who was making use of the freeride trail intended for such a purpose.

If even these crazy freeriders have a place where their antics are acceptable in certain contexts, the problem isn’t so much that this type of riding exists, but instead the terminology that we use to describe it. Within the industry, the media, and even our day-to-day conversations, if we see someone launching a 30-foot cliff on an 8-inch travel freeride sled, we call that “mountain biking.” If we see someone grinding up a narrow singletrack trail for hours, climbing thousands of vertical feet up into the middle of nowhere, we call that “mountain biking” too. Sure, we have different terms to depict the different sub-genres of mountain biking, but those terms mean nothing to anybody not familiar with the bike industry… and even amongst those deeply-ingrained in this sport, there’s significant debate about what exactly those terms mean.

But really and truly, one of the only tactics we have at our disposal to combat this wrongful association in the minds of outsiders is to create some sort of separation between the two versions of mountain biking. In my opinion, I think this means that we need new terminology. More than that, we almost need two new sports.

The sport of “mountain biking” encompasses so much: it encompasses the freeriders and the backcountry explorers discussed above. It includes dirt jumpers in skinny jeans. It includes fat bikers pedaling on snow in Alaska in the dead of winter. It includes the family of four going for a leisurely pedal on their local beginner-rated singletrack trail. It includes the group of tatted-up singlespeed hammerheads drinking whisky out of flasks as they seek to crush each other, body and soul, on their weekly group ride.

Our sport of mountain biking is an incredibly-diverse sport!

The “how” behind this is the trick, though. And I think some of that starts with the bike industry and the media. Instead of having every single video look like this:

What if we published more videos that look like this:

Instead of every single advertisement featuring some freerider dragging his rear tire, what if there were more photos of backcountry bikers riding some real singletrack, with gorgeous mountain peaks in the background?

Of course, we’re not totally blameless in this identity crisis issue here at Singletracks–as a mountain biking media outlet, we share many of these videos ourselves. In fact, every single image (aside from the initial meme) used in this article was featured at one time or another as a Photo of the Day here on the site.

So why do we have this problem in the first place? And will it ever change?

You might say to me, “Greg, well why does this identity crisis exist in the first place?”

I think part of the reason it exists, and part of the reason it’s not going to be so simple to change, is because the back-flipping, berm-slashing sells. It looks cool, and it sells bikes. And the badass freeride videos are, quite frankly, way more entertaining to watch than someone crushing a long climb on his XC bike. That’s just the way it is.

So do I think that we can simply say “stop slashing berms” or even “stop sharing photos and videos of riders slashing berms” and it will fix all of our problems? Heck no. That’s like saying that companies (not specifically talking about bike companies here) shouldn’t include scantily-clad women in compromising position in their advertisements. The way some of those advertisements portray women may be gross and sexist, but no matter how sexist it is seen to be, sex still sells. And so does berm schralping.

At some point our idealism and our ethics run into a brick wall of money. And when money is on the line, apparently anything goes.

Hopefully, eventually, our ethics can chip away at that brick wall of money. Call me a pessimist, but I think our ethics are more like a chisel than a sledgehammer.

One final note about bikes in wilderness.

While I think the meme that is posted at the beginning of this article highlights an all-too-true disconnect in the perception of mountain biking, I do want to note that the current efforts being undertaken by the Sustainable Trails Coalition to end the blanket ban on mountain bikes in Wilderness areas will not open the door for freeriding in Wilderness. In fact, the draft Human Powered Wildlands Travel Management Act of 2015 is adamantly against building manmade structures in Wilderness–berms, jumps, and ladder bridges seem to qualify. Also, the draft bill allows for the posting of speed limits, and even “adding [trail] features that curtail excessive speed and discourage trail users from creating unauthorized shortcuts and trails.”

Undoubtedly this identity crisis is in full-effect, and the perception of uninformed people on the outside looking in can negatively impact these efforts to allow backcountry biking. But I think it’s important ensure that the record reflects the actual goals and intention of the STC.

If you came to this article expecting easy answers, I apologize, because I don’t believe that I’ve been able to provide any. I think if there was an easy answer to be given, it would have been providing a long time ago, and we wouldn’t be in this predicament of an identity crisis.

I can’t even say that we’re immune from this identity crisis issue here on Singletracks. As a mountain bike media outlet, we share many of these videos ourselves. In fact, every single image (aside from the initial meme) used in this article was featured at one time or another as a Photo of the Day here on the site. And we shared both of these videos. While perhaps none of our staff members are capable of riding Red Bull Rampage and while perhaps we don’t slash berms or destroy our local trails, we like watching a good freeride flick just like everybody else–just like you.

If there’s one take away that I can provide, it’s this: ride responsibly. Don’t be a jerk. Respect the environment, and respect the other users that you encounter on the trail. If we all do our part to conduct ourselves in a responsible manner, perhaps over time this mis-perception of what the average mountain biker is actually like will slowly, very slowly, change. 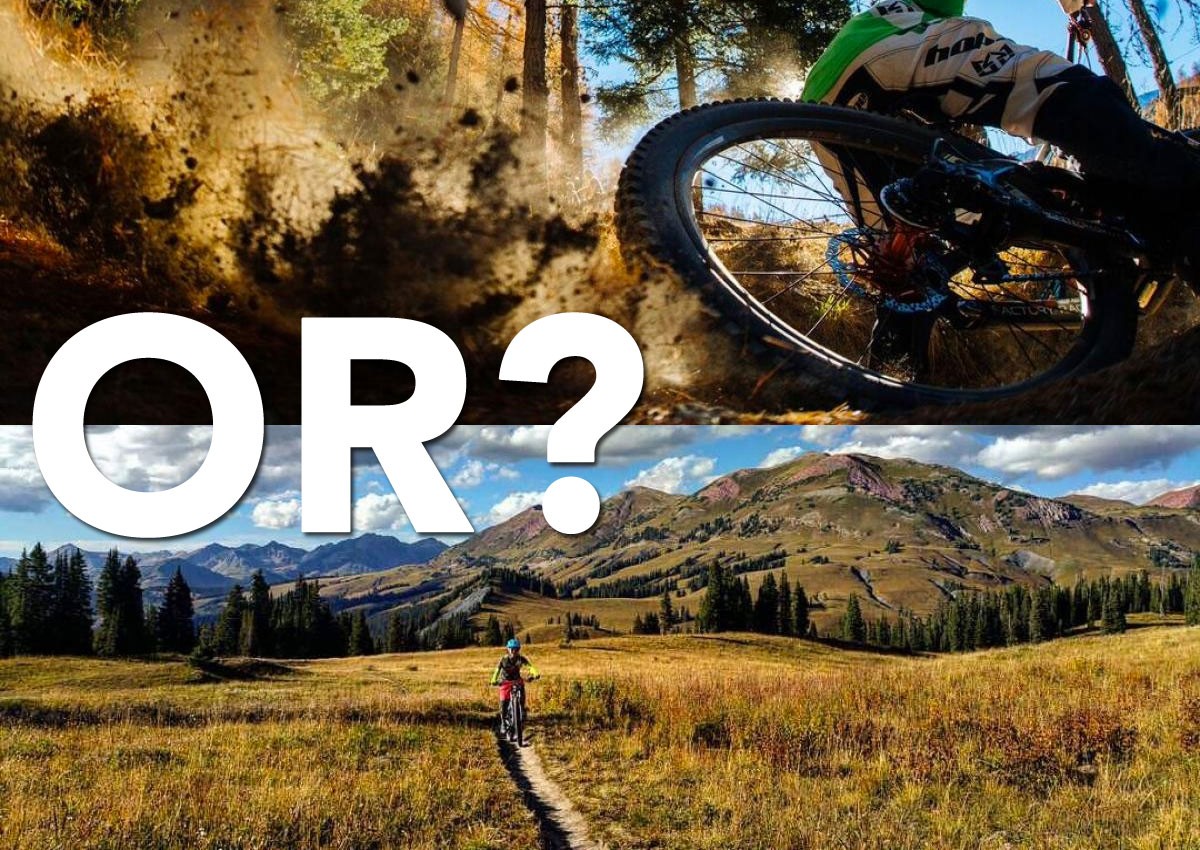 Beginners
How do You Usually Get to the MTB Trails you...
Bike Reviews
Santa Cruz Megatower Monster Sled In for Test
Beginners
Don’t get Bitter, get Better with these 8 Mountain Bike...
News
BLM Approves Plans for 28 miles of New Trails in...