If you haven’t already heard it through the grapevine, the Lunch Loop area in Grand Junction is expanding in a big way!  Over 100 acres of property east of the current area will be modified in the next few years to create more hiking and biking trails. Mesa Land Trust purchased the property, called The Three Sisters, which was then deeded to the City of Grand Junction.  It is now protected through a conservation easement that will preserve awesome views and allow for trail building.

The Three Sisters area is located east of the current parking area and trails.  Three large hills make up Big, Middle, and Little sister and will provide an additional 130 acres of terrain for recreational use.

This past weekend I was fortunate to take part in a trail building day in the Three Sisters area.  Last fall a short beginner trail, “Hop, Skip, and a Jump,” was built just east of Curt’s Lane.  Our trail would branch off from that and up onto a bench between the Big and Middle Sisters. 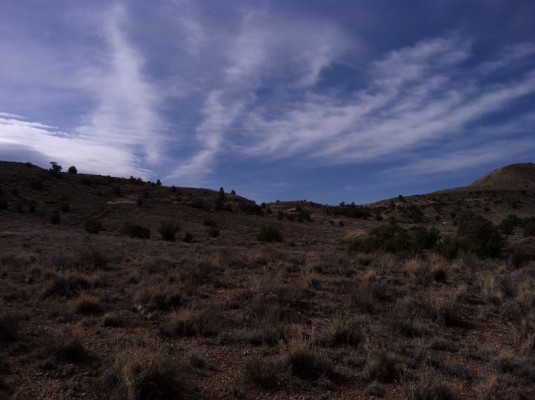 Big Sister is just barely visible in the top right corner; our trail work went around the edge of this bench and then cut across and up toward the saddle.

I’ve never participated in a trail building event before and really didn’t know what to expect.  Probably what I least expected was for someone to hand me a McCloud and say, “Here, you take a stab at it.”  What?  Me?  What if I do it wrong?, I thought.  It turns out that in the desert, when the flags have already been placed to represent the trail, trail building isn’t too difficult!  Wait, let me rephrase that:  our stage of the trail building process was not as complicated as I thought it would be.  Basically we worked from flag to flag scraping off the top layer of soil, weeds, etc.  We made sure to allow for water flow across the trail and left a few rocks here and there just to make things interesting. 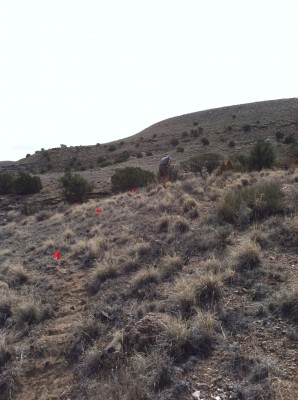 Flags represent the downhill side of the trail and a volunteer slowly makes his way along the path, scraping away dirt as he goes.

I have to say, trail building is something any biker, hiker, or trail runner should experience–and all three groups were represented this past weekend.  I worked side-by-side with a hiker and a man in his late 60s who trail runs at Lunch Loop every day.  Learning that bikers aren’t the only ones volunteering at trail events was exciting; it made me realize that here in Grand Junction, we’re all willing to get out and get dirty in order to create new recreational opportunities. 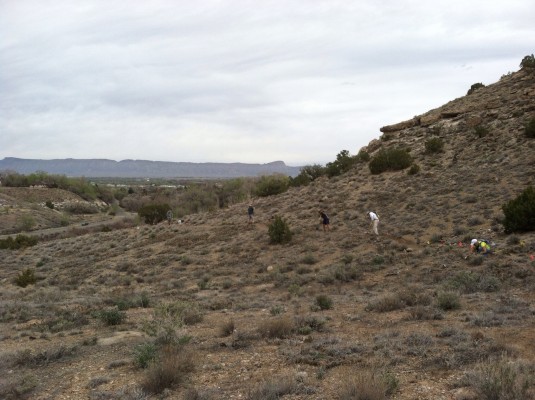 A group of volunteers works to smooth and pack down the last bit of trail we completed Saturday.

We worked from 9am until about 2pm before heading back.  Over the next twenty minutes or so as we hiked out, we packed down the trail we’d just created and marveled at how much things had changed in just one day.  Our “intermediate” trail had come to life.  It was there; I was walking on it.  In the morning it had just been raw earth with flags and now it was an actual trail.

While we were busy working on easier portions of the trail, another group, the “rock crew,” was modifying another area.  On our way out it was clear the rock crew had certainly been busy altering one section of trail.  That morning as we scrambled through a boulder-strewn area I thought, there’s no way this will ever be rideable for me!  But walking out I found myself amazed–the whole section had been transformed into rock ramps and ledges.  I can’t wait to go ride those!  Eventually we caught up to the rock crew; they were busy re-doing an old rock bridge on “Hop, Skip, and a Jump.”  Watching those guys lever rocks into place was probably one of the highlights of my day.  The vision they have to take rocks and fit them together like puzzle pieces is pretty cool. 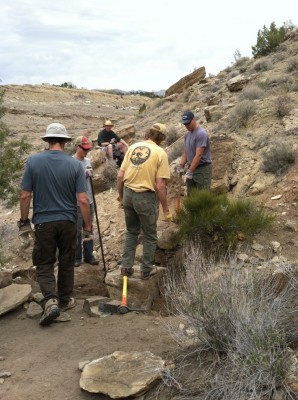 The rock crew at work.

On Sunday Adelle and I rode at Lunch Loop and, at the end of our ride, headed out “Hop, Skip, and a Jump” and rode right across that very same rock bridge.  I have to say those guys did a spectacular job on it.

If you’ve never had the chance to help build a trail, make a promise to yourself to do it this year.  The next time a local group announces a trail building day, be the first one to sign up.  You won’t regret it.

Repair
MTB Lube Theory: Which Oil or Grease Goes Where? We...
Beginners
What is the Noisiest Part on Your Mountain Bike?
Advocacy
Trail Agents from Mountain Bike Orgs are Taking on the...
Repair
Quick Question: Any Tips for Removing a Stuck Pedal?
Subscribe
Login
Please login to comment
7 Comments
Most Voted
Newest Oldest
Inline Feedbacks
View all comments

I have done plenty of trail maintenance on my own but would love it if they organized trail days where I live. Maybe one day I will get a chance for more involvement.

I rode the Lunch Loops when I was at the FTFF…as we finished up we were about to hit Curt’s lane when a lady walking her dog stopped and told us about that trail. She said it was great, but also that it was really easy, so my friend and I unfortunately opted for the ‘gnarlier’ Curts. I wish I had ridden it now. Thanks for telling me; I did not know it was brand spanking new. I rode the Coldwater Mountain trail last year a couple of months after they just finished the first phase, and it was amazing! In fact, one of the top 5 funnest trails I have ever ridden.

I say all of this because after moving to the Denver area last summer, I have been eager to get involved in trail building and advocacy. I not only joined IMBA (right up the road) but also started going to local COMBA meetings and volunteered for the mountain bike patrol (and we have a trails day planned soon). I found myself giving more time, and money (like the donations at the COPMOBA at the FTFF), and I feel that it has made me a better rider. I don’t just ride bikes anymore…I help build and patrol them, and overall that makes mountain bike a part of me, rather than just a hobby or a sport or a way to trump a Strava goal. It feels great to give back, and to communicate with runners and hikers in order to break down social barriers and undo stereotypes….which not only builds community, but increases our access and our trail building capability.

Thanks for the article and your first hand account of your trail building. I was surprised how an entire leg of a trail can be built in a single day with enough help. I encourage everyone reading this to join IMBA, and plan at least one day a year to do trail maintenance or building.

Great article! Volunteering to maintain and build your local trails is truly a rewarding experience.

Re: difficulty of building: building trails in the desert is VERY easy compared to building in the thick undergrowth and forests of the southeast (and some other parts of the nation). This is one of the reasons that trails can spring up seemingly overnight in the desert. In a dense forest, sometimes the hardest part isn’t even building the trail tread–it’s cutting the corridor through the trees and undergrowth!

Yet another reason why fruita/GJ is awesome!

That is very true,Here in southern Virginia in the foot hills We have built 35 miles of Singletrack within the city limits of Danville.We have plenty of hills,rocks and roots to deal with.These trails take a lot of work.They are tight and twisting and cross several creeks.I have built over 45 bridges from 6 feet to 36 feet in length.Lots of trail work is required to keep Angler’s Ridge the best in the state.

I participate in quite a few trail builds, I have been crew leader on the past three trail builds now. The leaders of the club I belong to are working to teach me the finer points of trail design now! They are letting me help design the newest trails in my area now. It is a lot of fun and very rewarding work!

Great to hear all the enthusiasm about trail building! I would say I that these days I do as much trail building related activity as I do actual riding.

Btw, there are lots of places to go look for opportunities. In my area (Colorado Springs) here are a couple good web sites that list opportunities:

Practically every outdoor group has trail work days so check around and get involved.

Thanks for all the great comments! Glad everyone is so excited about trail building and new trails in general. We just got back from riding some of our favorites down in Durango 🙂