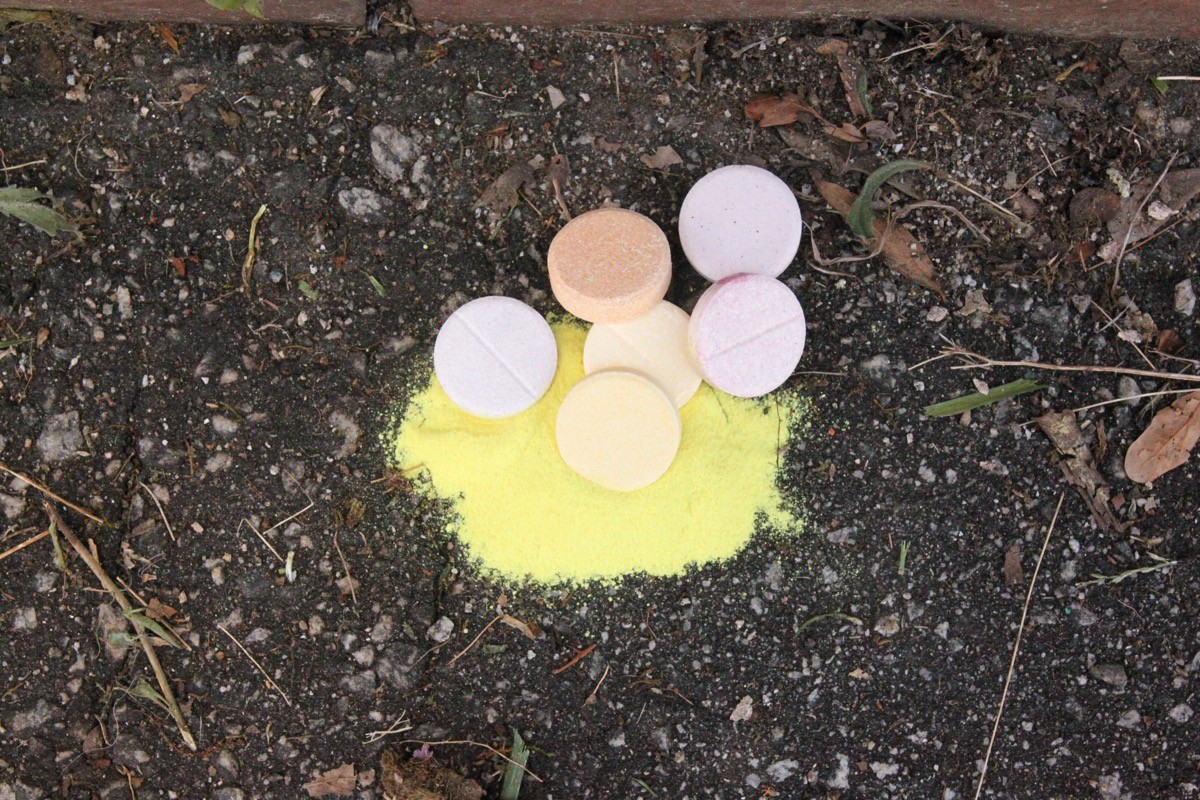 Mountain biking has a tendency to make riders a little thirsty. Hydration is hugely important on the trail, especially in hot summer months, and fortunately there are plenty of products on the market to keep mountain bikers hydrated. Some drinks attempt to replace calories burned, while others focus mainly on keeping electrolytes in balance. Still others add caffeine for an energy boost. 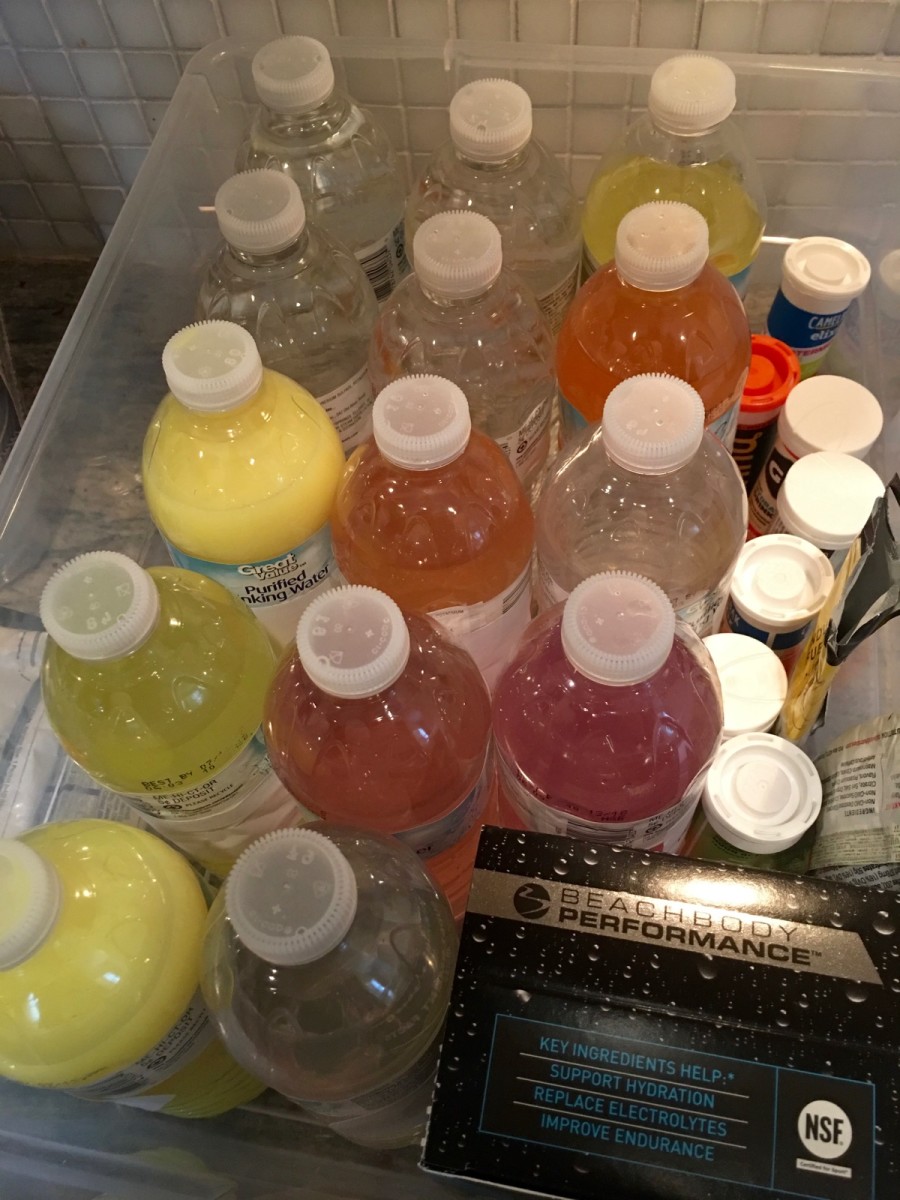 Testing sports drink efficacy would be difficult: we’d need to exactly replicate conditions and intensity for the same rider over multiple rides, which truthfully just isn’t possible. So, for our test we decided to judge sports drinks by taste alone since, you know, the drink that works the best is the one that you actually drink. The thing is, most of us would agree that none of these drinks taste very good, but then again, that’s true of a lot of things that are good for us. 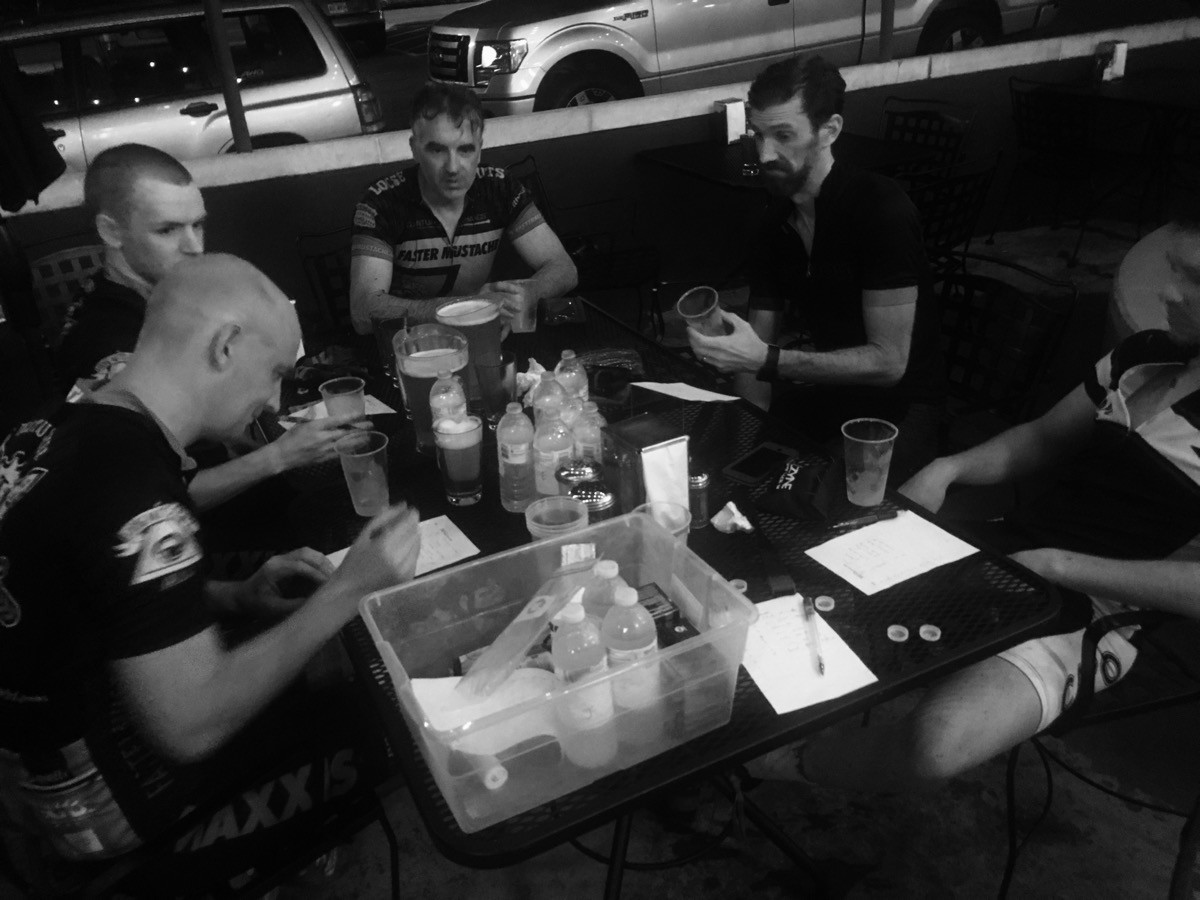 Our panel of six mountains bikers (myself included) completed a roughly 20-mile, 2.5-hour ride in low 80-degree heat with 70% relative humidity. On paper that might not sound hot but by the end of it, we were all drenched with sweat and ready for a cold drink! But the beer would have to wait until after our test, which was conducted in blind, randomized fashion so no one would know what they were drinking. Each taster was asked to rate the drink on a scale of 1-10 and to make notes about the flavor.

After normalizing all the ratings, here’s how our group ranked the taste of these 10 popular sports drinks. 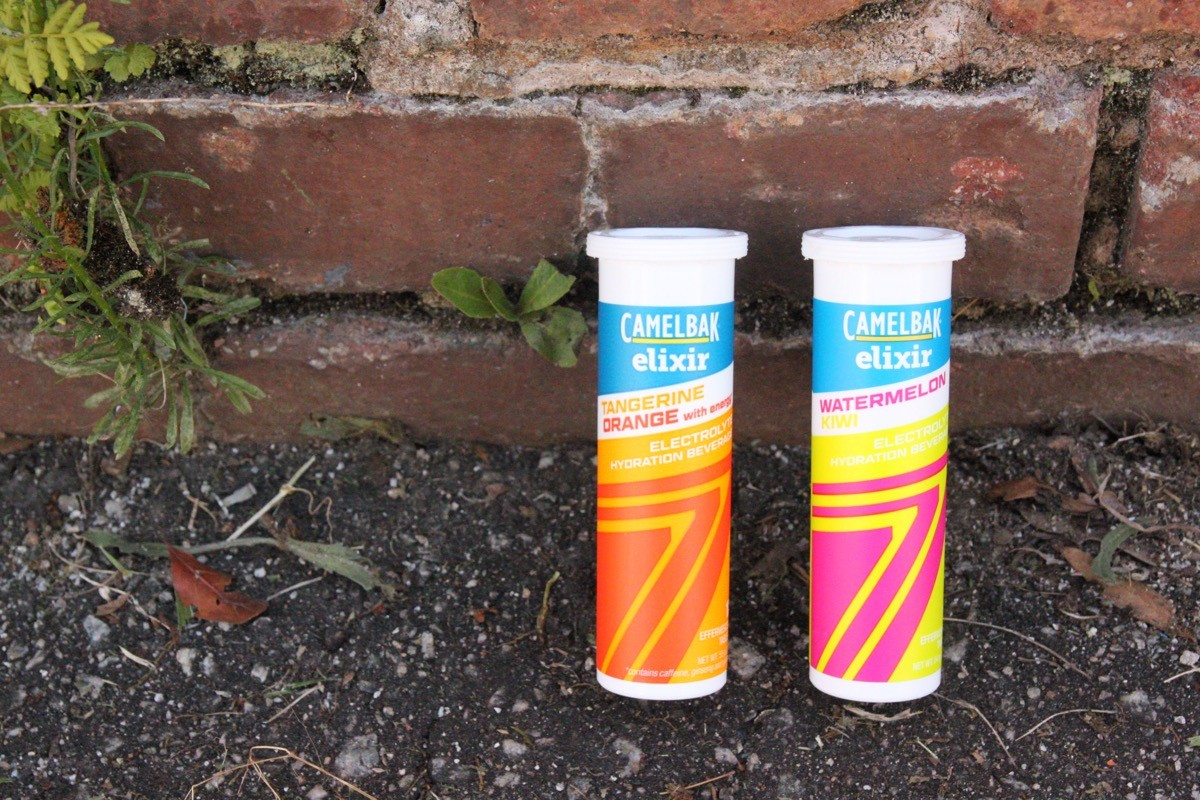 Like many of the tablets we taste-tested, the Camelbak elixir tabs are sugar-free and pack just 10 calories in a 16-ounce serving. The Watermelon Kiwi flavor we tested is high in vitamin C (one taster said it tasted “lemony”). Only a couple of us actually said it tasted like watermelon but hey, we didn’t get many of the other flavors right either.

Camelbak elixir Watermelon Kiwi was described as “candy + electrolytes” by Chris K. and “pleasant” by Nick, the Brit in our group. 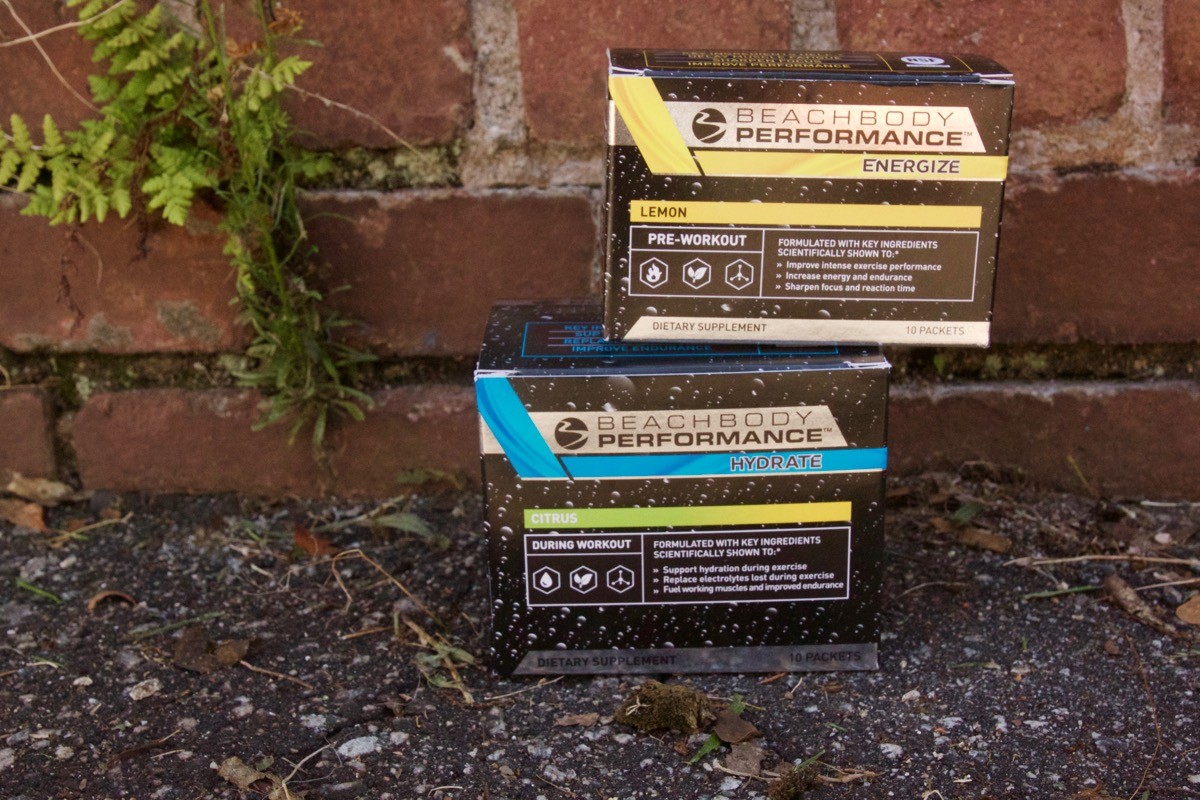 Before this test I wasn’t familiar with Beach Body Performance sports drinks, so as soon as I mixed the powder with water, I was struck with the drink’s bright neon yellow glow. Not only that, unlike all the other drinks in our test, the Beach Body Performance drinks are opaque, almost like a glass of milk. Bright, yellow milk. In the second photo at the top of this article, one of the Beach Body drinks is in the first column, third row. Also, the yellow powder at the very top is Beach Body powder.

The Citrus version we tested is designed to be used during the ride with electolytes and fuel for endurance. Beach Body uses beet sugar as the primary sweetener, along with dextrose and Stevia extract. As one of the more sugary drinks in the test, our group seemed to enjoy this one. One reviewer said it tasted like orange juice, while another noted it was a bit chalky.

Like the Beach Body Citrus drink, the lemon version is also very yellow and a bit on the chalky side. It’s sweet too, thanks to the beet sugar and Stevia. The lemon flavor we tested is part of Beach Body’s Energize line, so it includes green tea leaf extract for an added boost. The ingredient list also includes beta-alanine, which may cause some people to experience a mild tingling sensation. Where on the body this tingling may occur is not specified on the packaging.

Camelbak’s elixir Tangerine Orange tablets come “with energy” and also a not-so-bad taste. The long list of energy ingredients includes caffeine (54mg), guarana seed extract, ginsing, and a few of the B vitamins. Like the Watermelon Kiwi flavor we tested, this drink contains just 10 calories and 230mg of sodium per 16 ounce serving.

One taste tester said this drink tasted “citrusy, watery” while another guessed the flavor was strawberry. I personally tasted the orange flavor, but there was a definite artificial sweetener aftertaste. Finally, Chris B. noted the effervescence from the tablet as “tingly.” 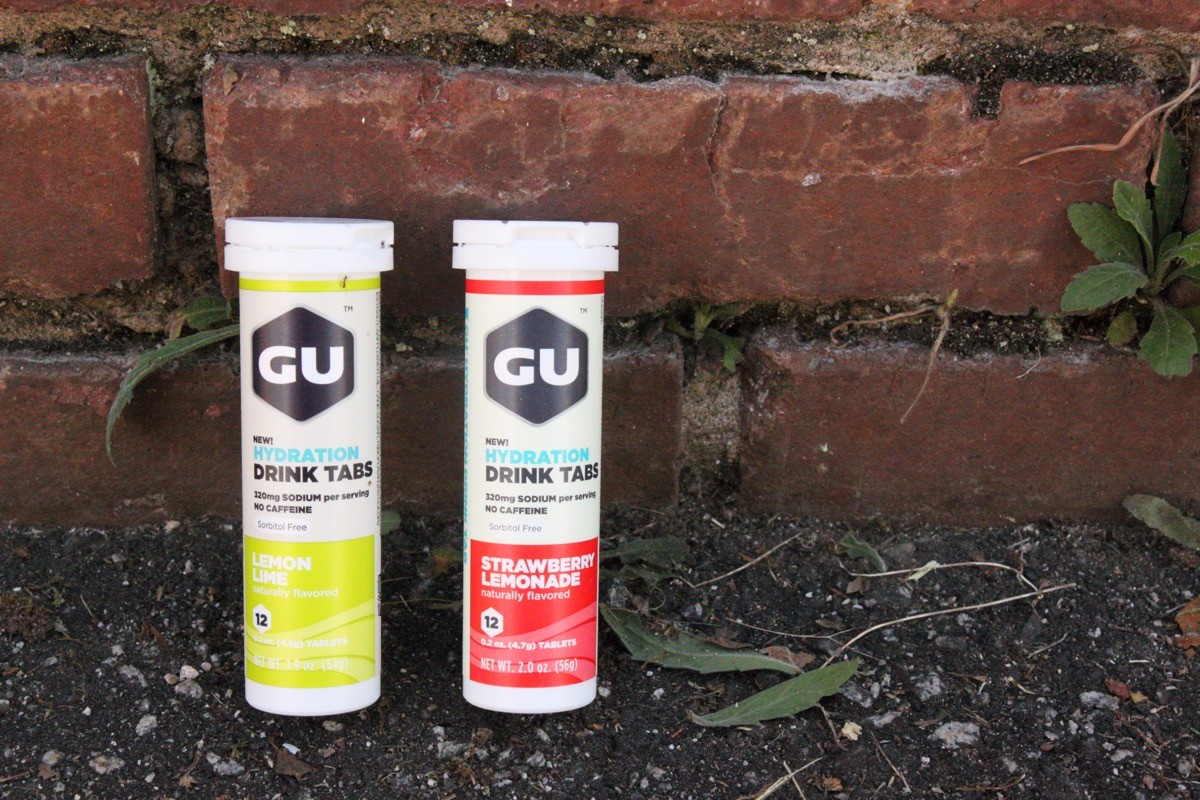 This strawberry lemonade-flavored drink from GU turned out to be fairly polarizing. Paul and I personally enjoyed this one, ranking it first and second best respectively, while Nick ranked it #7, saying it tasted “not good.” Most of us guessed it was supposed to be some kind of berry flavor, while a couple tasters noted the pink color of the beverage.

GU says this drink is formulated “primarily for hydration” and contains xylitol, which is meant to reduce stomach problems associated with other sweeteners like sorbitol. Like the tablets from Camelbak, GU Strawberry Lemondade contains just 10 calories and is sweetened in part from Stevia leaf extract (and the aforementioned xylitol.) At 320mg of sodium per 16 ounce serving, this drink contains slightly more sodium than others that rated more highly in our taste test. So take that with a grain of salt–ha!

GU Lemon Lime offers almost identical ingredients to the strawberry lemonade version that landed at #5 on our list. Our taste testers immediately picked up on the added saltiness of GU Lemon Lime compared to other drinks in the test. Nick said this one tasted like “salty lemonade,” while Chris K. noted it tasted like “bad lemonade with a hint of bleach.” But to be fair, John ranked it his favorite and for me, it ranked in the top half. News flash: everyone’s tastes are different! 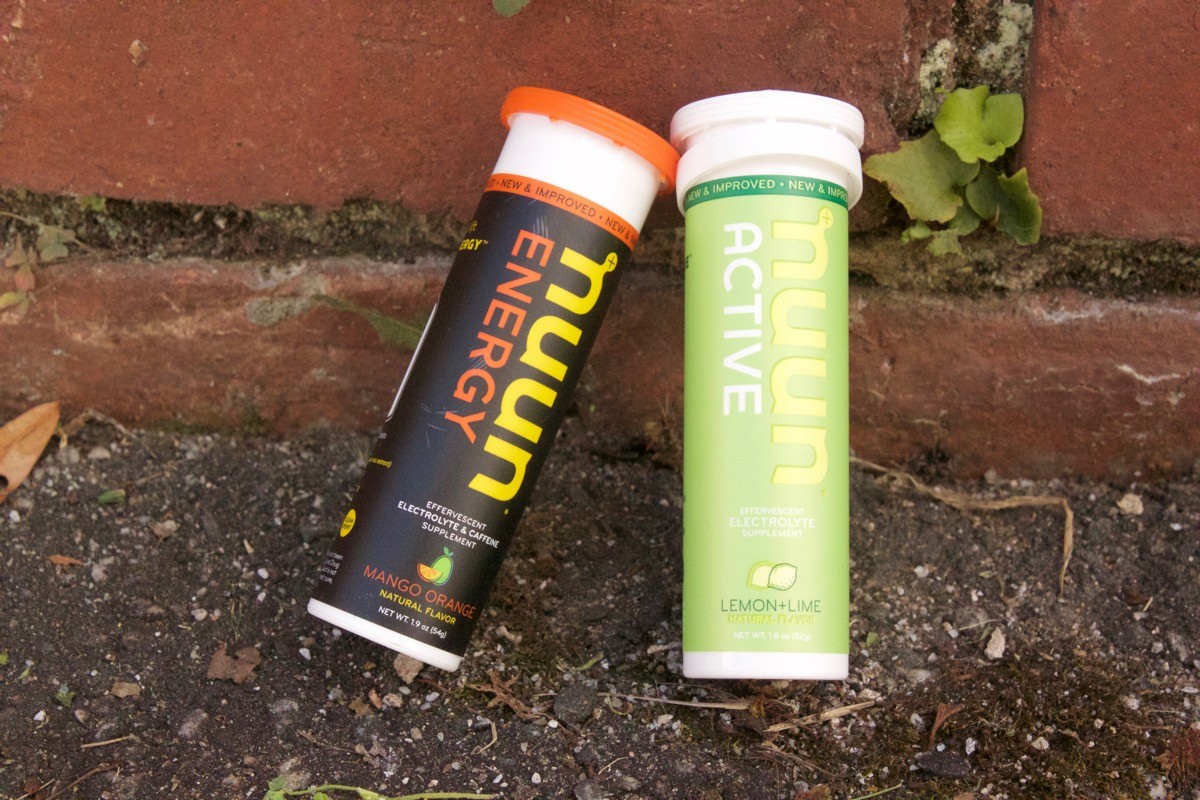 Is it a coincidence that both lemon lime drinks ranked back-to-back? Probably, but there does seem to be a pattern in our test results where the drinks with more sodium content ranked lower than those with less. Nuun Lemon Lime steps up the sodium content over GU and Camelbak, packing 360mg of sodium per 16 ounce serving.

A couple of us noted the flavor seemed weak but generally citrusy. Paul ranked this one his second favorite, while two of us placed it down at #8 overall.

Nuun Energy Mango Orange adds a splash of caffeine in addition to the electrolytes provided, for an added energy boost during your ride. Most of us picked up on the orange flavor this time around. Like Nuun Lemon Lime, this drink packs 360mg of sodium, which gives it a saltier taste than others that were more positively received by our taste testers. 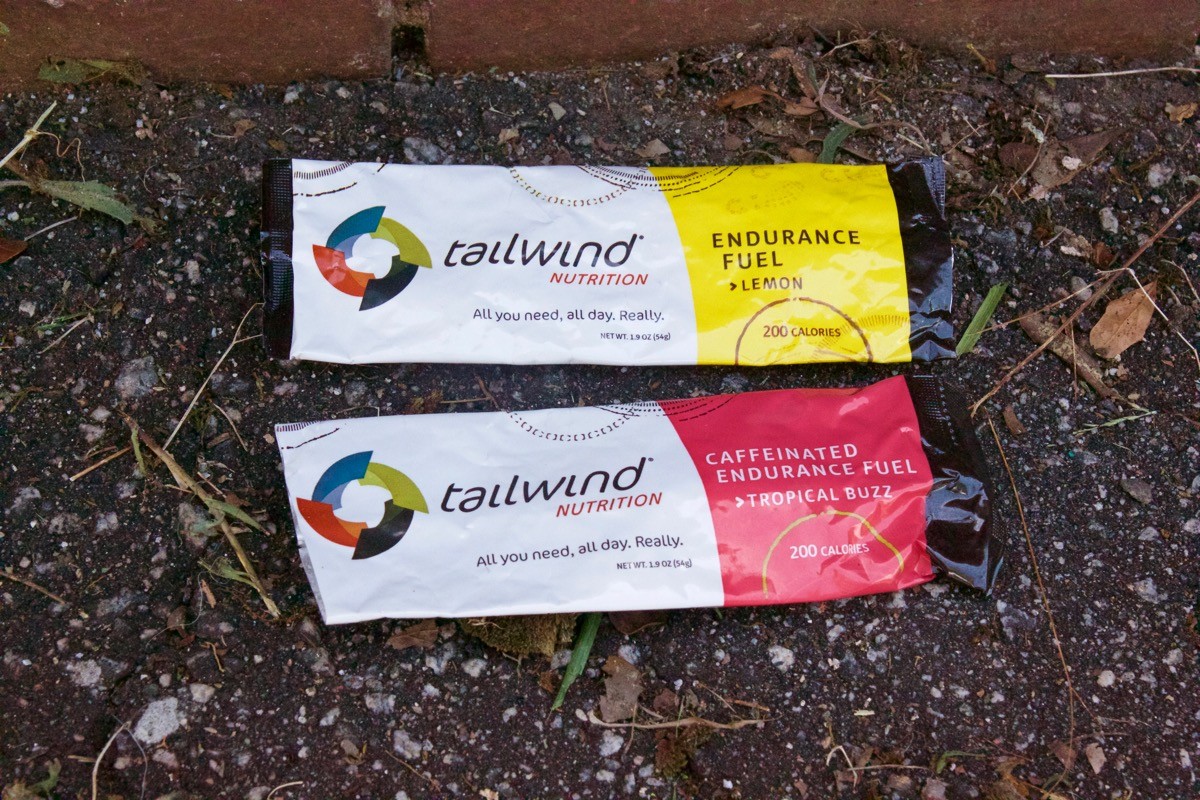 Tailwind is different from most of the other drinks in our test in that it provides both hydration (electrolytes) and nutrition (calories). Mixed according to the recommendations, this drink boasts 200 calories per 24 ounce serving thanks to sugars like glucose and sucrose. It’s also interesting to note that unlike the other drinks in our test, Tailwind mixes up completely clear so that it looks like water.

Now, before I share the comments from this taste test, keep in mind the idea that the foods that are the most healthy often don’t taste very good. 🙂 Perhaps the least harsh feedback came from Chris K. who said Tailwind Lemon Buzz was “clear and bland.” John said it tasted “[redacted] awful” and Paul compared it to “bath water.”

In defense of Tailwind, I’ve personally used it on long rides and it’s worked well for me. The taste is very bland–unlike the others in our test, there’s little noticeable fruit flavor–and it’s also the saltiest in our test with 404mg of sodium per 16 ounce serving.

Poor Tailwind didn’t catch a break in our taste test. Tailwind Tropical Buzz adds caffeine (70mg per 24 ounces) for an added energy boost during the ride but sadly, it ranked poorly among our tasters. In fact, only one person ranked this drink higher than their bottom 3 for the test. Chris K. found Tailwind Tropical Buzz to be “clear, sticky, and crisp” while Chris B. had my favorite comment of the night, describing the taste as “bar mat squeezes.”

It’s interesting to note that these sports drink taste test results lined up almost perfectly from least sodium content to most sodium content. Not only that, among drinks with identical sodium content, versions without caffeine rated higher than those with caffeine. We didn’t test pre-mixed sports drinks like Gatorade or Powerade, but my gut tells me would rank highly because, IMO, they generally taste really good. As it turns out, Gatorade has far less sodium per serving than even our #1 pick, which certainly fits the “lower sodium equals better taste” equation.

Aptly named article!
Tough to find a good one and I would agree that less sodium = more taste.

No Skratch Labs? I like the taste of a couple of their flavors.

I have tried a few of the ones you’ve listed, but I always come back to Gatorade powder. I like to keep my Hydro Flask full of it and a squeeze bottle of water for all rides.