Ok, so I may have been a little over-ambitious in my New Year’s resolutions this year. Earlier this month I signed up to complete my first 100-mile mountain bike ride, the Cohutta 100 in Tennessee on April 28. It’s 100 days to race day and I’m starting to wonder what I’ve gotten myself into.

The Cohutta 100 is the opener in the annual National Ultra Endurance (NUE) Series so all the best endurance athletes from around the US will be there to kick off the season. As far as 100-mile mountain bike race courses go, the Cohutta is said to be a relatively good one for first-timers with a low singletrack-to-fire-road ratio. Still, the route climbs a total of 14,000 feet and crosses the state line into Georgia and back. 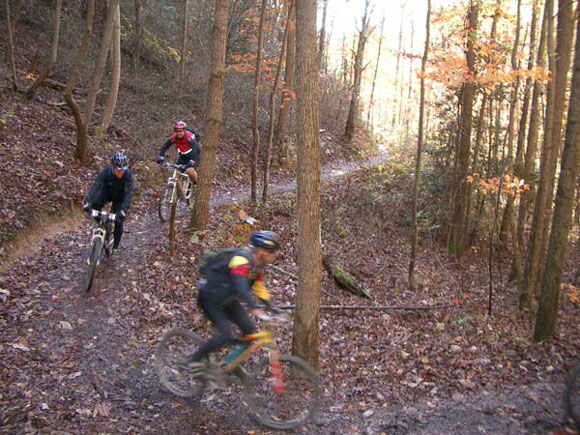 At the northern end, the race starts at the Brush Creek and Tanasi trail systems, located near the Ocoee Whitewater Center before heading south on forest roads through the Cohutta Wilderness area. At the southern end, this year’s course will include sections of the Pinhoti trail for the first time, adding another fun and well known singletrack trail to the mix. The race returns to Tennessee via the same forest roads with a downhill singletrack finish on the well-known Thunder Rock trail.

Training for the race

Completing a dirty century mountain bike race has always been on my to-do list and in 2008 I completed the Sumter Dirty Metric Century in South Carolina. That race was 100K which works out to 62.1 miles – nearly 40 miles short of 100. To be honest, I barely survived that race and at that time I couldn’t imagine going for 100 miles. Apparently time dulls painful memories. 🙂

But here I am – it’s 2012 and I’m committed, having already plunked down my $135 race registration fee. Doing the math, if I average 10mph during the race – which is aggressive – I’ll be on the bike for 10 hours. That’s four hours longer than the longest ride I’ve done so clearly I’m going to need to do some training. 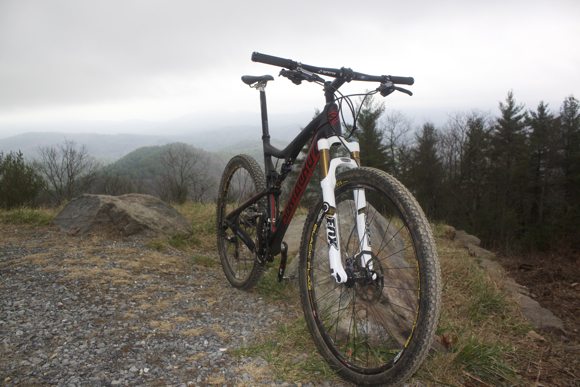 The Bear Creek Overlook on the Georgia side of the Cohutta 100 course.

Unfortunately there aren’t a lot of (free) 100-mile mountain bike race training plans to skim online (one Google search I did brought up my own article about training for the Sumter Metric Century). I did find several 100-mile road cycling training plans but they all seemed way too wimpy (example: a 10-week plan that starts with a 25-mile “long” road ride). From the short paid plan excerpts I read online, a 100-mile mountain bike training plan should be at least 12-weeks long and will start off with a 4-hour “long” ride (35-40 miles for me). 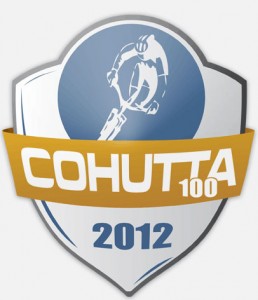 So I built my own training plan. I won’t share the details of that plan until I complete the race (and know for sure the plan works!) but here’s the jist of it: progressively longer rides (distance but more importantly time) each weekend and 1-2 solid rides (20+ miles) during the week. I’ll use my road bike for about a third to a half of my training rides mainly because road biking offers a more consistent aerobic workout than the heart rate spikes you get from mountain biking. Plus road biking usually takes less time since I can start and end my rides at the house instead of driving to a trailhead.

Nutrition will play a key role in my success (or failure) during the race and in training so my plan includes finding the best things to eat during the ride. Think about it: in 10 hours time, even if you’re not exercising, you’ll eat 3 meals. Now add in the calories you’re burning on the bike and you need a ton of fuel to keep going. Eating regularly and often during my long rides will be key.

Although it’s 100 days until the race, my training plan doesn’t officially kick off until February 11, 12-weeks to race day. Even so, I’ve already started building my base with several 35-mile road rides and 25-mile mountain bike rides under my belt.

Training for a 100-mile mountain bike race promises to be a huge time commitment and mentally I know it’ll be tough to get out for long rides this winter. Still, riding my mountain bike 100 miles is something I’ve always wanted to do and there’s no better time than now to saddle up and do it!

Over the next 100 days I’ll be writing about my training progress which should help keep me motivated and accountable. Just one hundred days until I cross that finish line!

That’s one heck of a ride even if it is mostly fire road.

GOOD LUCK DUDE! I’d love to join in on the “fun” but there’s just no way I could get ready in time with the hours I’m working right now. I may sign up for the 65 miler….I’ve done it once before and had one of the worst days I’ve ever had on a bike that day (took me 9+hrs to finish…..) so I kinda want to give that one another run.

The Tanasi/Brush Creek trails are an absolute blast, just super fun. There is a lot of gravel though, just be prepared for it mentally.

So which bike do you think you’ll race? The Tallboy or Redline? The Redline could be built up lighter…but the cush of the Tallboy might be nice too. Decisions decisions…

Still undecided on equipment. I’m leaning toward my hardtail 1×9 Redline but it’d be nice to have a few more gears, especially for the forest road stuff.

Yes, eating is definitely the key. I barely finished the Leadville 100 years ago just eating GU the whole day. That was not smart. I will do a better job planning this year if I hit the Leadville lottery. Good luck.

Awesome! I am planning to do a 40 mile race on similar trails this summer. Keep us up to date on your training progress! We’re pulling for you!

Wow, that does sound like a true challenge! I know you can do it though… it’ll be fun reading about your training.

My vote is ride the dualie. Even if it is mostly fireroad, it will be so much nicer on your rear than a HT. And, even as it stands now, the Tallboy is pretty stinking light!

My goal is to get in shape for the last Snake Creek Gap 34 mile race in March. You should work that into your training schedule!!

I think you have a sound training strategy. However, if you want a professionally prepared 100 mile mountain bike race training plan check out Chris Etough’s web site http://www.chriseatough.com/. As a matter of fact he has a 12 week plan specifically tailored to the Cohutta 100. I will use his plan to prepare for the Shenandoah Mountain Trail 100 this year. The plans are very comprehensive and include additional details about the course itself, pacing, nutrition, etc. They aren’t free, but from what I can see they’re worth the $$.