If you want to get cheap views on your mountain biking videos, just follow this simple formula:

Type in “trail dog” and you’ll see tons of pups chasing their owners through mountain bike trails. A trail dog will get you that Youtube cheese, and I want in.

It seems like you need a pretty sporting dog though, and Drama is anything but sporting. He’s addicted to air conditioning, doesn’t cooperate, and isn’t very courageous. He can’t even fetch, let alone follow me through the trails without a leash. Can Drama be a trail dog? There’s only way to find out.

We’re pretty sure that todays domestic dogs evolved from a common ancestor who resembled the gray wolf. It’s said that even handbag dwelling chihuahuas have wolf blood pumping through their veins. Their ancestors chased things in order to eat, and that same instinct is alive and well today.

In most dogs at least. Drama does seem to follow the person who feeds him, but that’s the only reason he’d trot behind me at 2 miles per hour. If he were driven by wolf instincts, he’d care more about actually catching me. He’ll follow for 15 or 20 seconds, and then get sidetracked to eat grass or pee on something. Drama just can’t stay on task and he has no sense of urgency. He’s accustomed to getting everything he wants without working for it, and that might explain his laziness. Maybe he’s just being a bulldog.

It’s easy to be fooled into thinking that Drama is just a slow pup, but that’s definitely not true. After drying off from a bath he loses his shit. The same thing happens if you try to sweep or mop something. It seems like Drama just doesn’t care about chasing bicycles, but I think I know a way to persuade him.

Okay, so I think we got a couple of decent runs out of Drama this way, but I can’t always ride the trails with a broom. Plus it doesn’t hold his interest any longer than the bike. After 0.1 of a mile he’s done, ready to drink water and lay around. French Bulldogs do have a tendency to overheat, so the tropical climate may have something to do with his reluctance to go full pup. Would he feel like running in cooler weather? Your guess is as good as mine. In another YouTube video, I did find a French Bulldog who seems to enjoy running after mountain bikes.

So I think we’ve proven that Drama will follow me through the trails if I wait up for him every ten feet. Should we give him the title of trail dog? I dunno. My dreams of careening through the trails with the sounds of my paws pitter pattering behind me were never realistic in the first place. Drama is more of a shop pup than a trail dog. If I’m working on my bike or editing videos, he’s always right there. He even co-hosts my podcast.

What do you guys think? Do any of you have trail yorkies, or trail shitzus? How far from wolf lineage can you get before it’s just not feasible? I want to know. 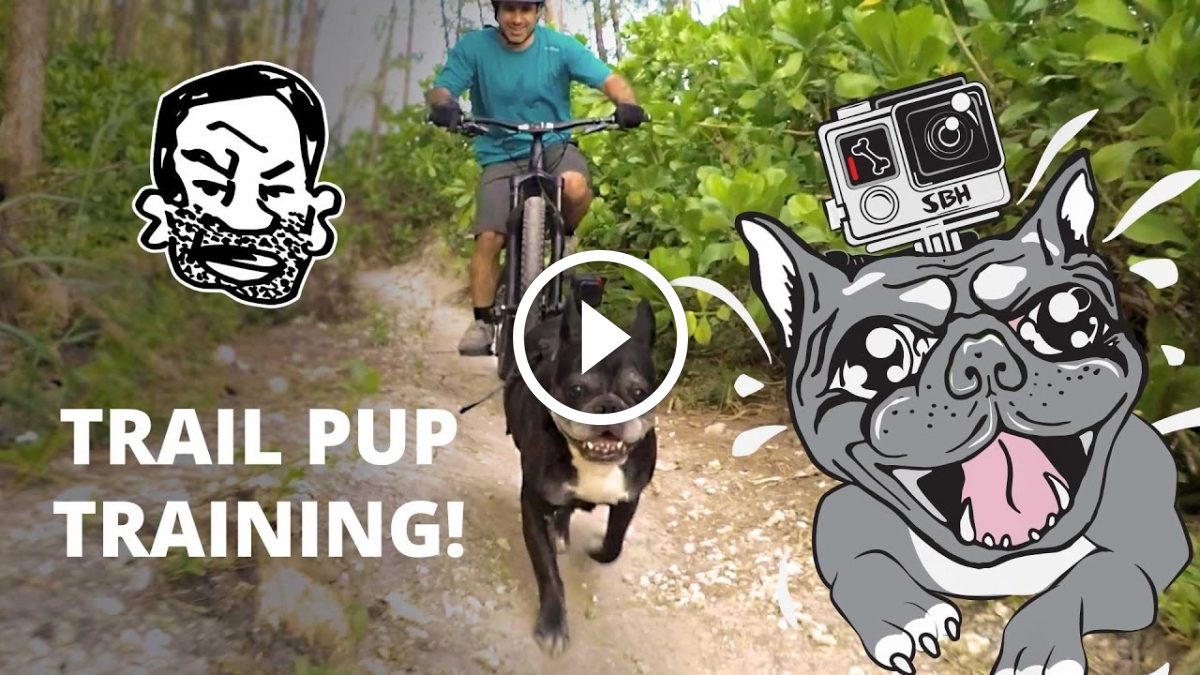 Videos
Watch: Dropping in to Pilot Rock in Pisgah
Videos
Must Watch: This Is Seriously "Rough AF!"
Videos
Watch: An "Absolute Savage" Rides the "Sickest Trail in Northern...
Community
A Dog's Tale [Video]

That was too funny. Nice try.