Editor’s Note: While Greg Heil will never fat bike up Mount Washington this quickly, he has been tackling big, snowy routes in the Colorado Rockies for the past 3 winters. While Greg is the Editor in Chief for Singletracks.com, the opinions expressed in this commentary are his alone and do not necessarily represent the opinions of Singletracks.com.

Red Bull recently released an article + video feature about the “First Ascent of Mount Washington by Bike in Winter.” The article, and especially the video, touted this as an historic achievement and an incredible feat of strength to climb this treacherous mountain.

However, what they didn’t discuss in the video but mentioned briefly, in passing, deep down in the article, is that the road is generally closed to bicycles, except for two days during the summer. So, they had to seek special permission to ride it: “You can’t ride a bike up there, unless it’s on one of the two annual, official race days — so we had special permission to ride up.” What, if anything, is remarkable about this ride is that Tim Johnson and film crew were able to achieve special permission to access the road, unlike your average fat biker. The fact that professional cyclist Tim Johnson won the Mount Washington road climb twice, in 2000 and 2001, undoubtedly helped him attain permission to ride on a normally-closed road.

Now let’s talk about the challenge, shall we? There’s no denying that climbing 4,685 feet in 7.2 miles is a steep climb, and that tackling the climb in one-hour, forty-five minutes and 48 seconds is pretty fast on a fat bike. But just stop for a second and watch the video that Red Bull published (click over to the feature, here). I can wait…

Professional cyclist Tim Johnson was supported the entire way to the summit. If he needed to air down his tires, a mechanic was there to help him. If he needed a drink of water, he got a bottle handup. If his little toes were cold, he stopped and got some warmers out of a snowcat. And he carried little to no emergency gear or extra layers of his own–in fact, in some shots, he’s not even carrying as much as a single water bottle with him. This entire ride was completely and 100% supported.

(For my opinion on self-sufficiency, read this: “Accept the Risks and Be Self Sufficient, or Don’t Mountain Bike.”)

But what about these terrible weather conditions on Mount Washington, which Red Bull plays up as some of the harshest in the world? While Mount Washington did indeed hold a land wind speed record of 231 miles per hour, on this day Johnson experienced wind gusts of up to 49mph, with wind chills down to -19-degrees F. Again, be sure to watch the videos… Johnson and Red Bull play up this wind as brutal and punishing. But if we take a step back and think about it, this is pretty much average for the high alpine in mid-winter in Colorado, or pedaling around a snowy pasture in Wisconsin. Sure, it’s chilly, but we’re not talking about record-breaking winds or record-breaking cold, here.

The final thing that shows me how exaggerated this entire experience was, are the tire pressures he chose: Johnson started with 8psi front and 6psi rear, and then dropped down to about 4psi, lamenting how low he was going: “that’s not a lot of pressure.” If Johnson was a legitimate fat biker and accustomed to riding in snowy conditions, he’d know that 4psi is pretty average, and some riders consider that to be a rather high pressure, especially considering this professional cyclist’s race whip weight of 150 pounds (Source). Many fat bikers would argue that he should have gone lower than 4psi, based on his weight and the steep grades he was climbing.

Sensationalization in the Media

The real problem here isn’t that Johnson went out and rode Mount Washington on a fat bike–that’s a solid ride no matter how you slice it, and at least qualifies as a respectable weekend workout for this pro racer. The problem is how trumped up and sensationalized the Red Bull coverage of this ride is. Red Bull claims that Johnson was “push[ing] the limits of what is capable on a bicycle,” but the data simply does not support that claim. Fat bikers across Colorado routinely ride in conditions this horrendous, and some routinely accomplish climbs of that magnitude. Also, the distance of Johnson’s ride was minimal–fat biking the 1,000-mile Iditarod Trail Invitational in Alaska, in the middle of winter, self-supported, on the other hand, is pushing the limits of what’s possible on a bicycle.

All of the truly extreme fat bikers of our day–the ones bikepacking for days and weeks in sub-zero temperatures, climbing up and over Colorado mountain ranges, and accomplishing untold feats without fanfare or film crew–are accomplishing these astounding feats self-supported. The true adventurers rely on themselves wholly in the midst of the unforgiving mid-winter landscape: they can’t stop and get a water bottle handup from a support crew or a mechanic to adjust their tires’ air pressure for them. The true fat bike explorers are indomitable freaks of nature accomplishing insane feats with no outside assistance, but if they so much as write a blog post about those feats, that may be the most you hear of them.

For his part, Johnson doesn’t seem to give too much hype to his “achievement”: “but it’s really not that crazy, you learn when you start to travel. It’s 6,288 feet, so by numbers it’s really not that tall, but the way the weather works in that area makes it a really dangerous place.” But Red Bull’s coverage of the ride is a different story. As an example of how they’ve exaggerated the difficulty of this ride to the extreme, check out this infographic that Red Bull produced that compares this Mount Washington ride to a loop in Central Park, New York City: 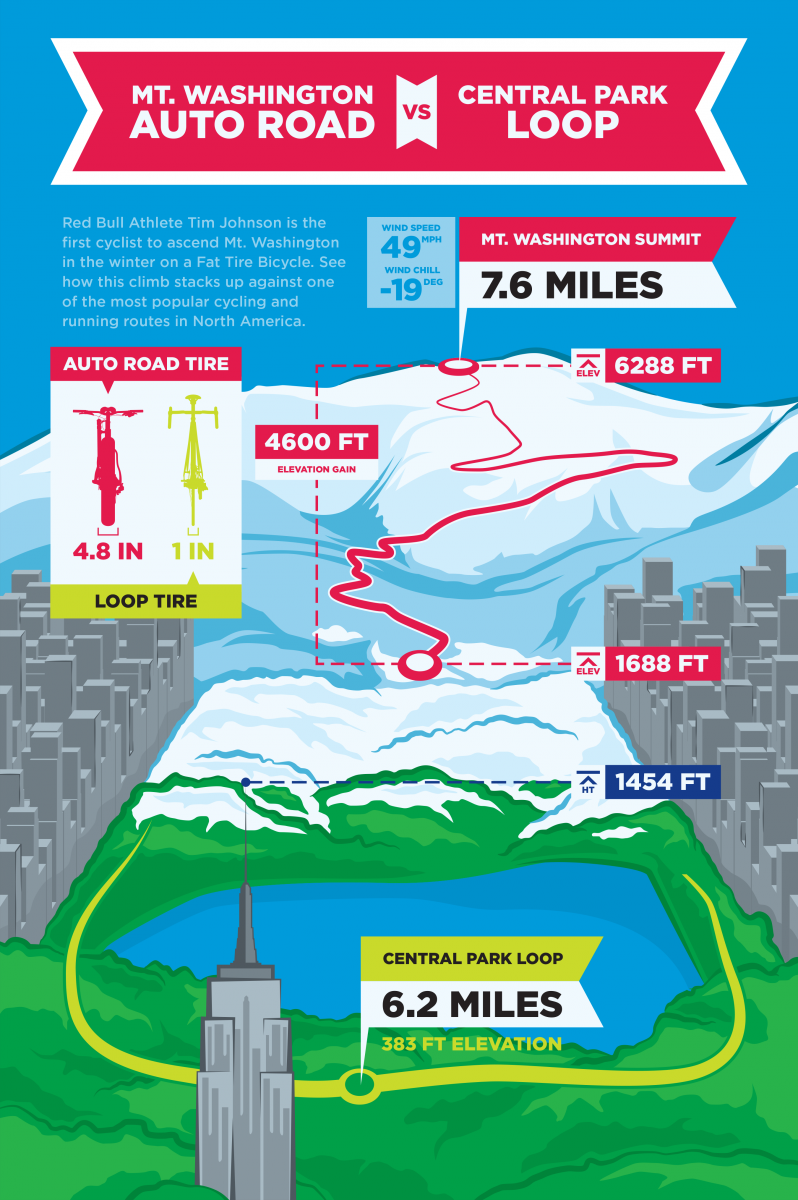 While I do appreciate the spotlight that Red Bull continues to shine on our sport of mountain biking–heck, we get plenty of page views out of Red Bull Rampage coverage–Red Bull needs to dial down overly-sensationalized videos like this. This sensationalization of the mundane is a trend that has markedly increased over the past year, and this recent so-called historic accomplishment only emphasizes the unfortunate trend.

While we love to share the coolest, most outstanding videos with our readers here on Singletracks–and at times, we let our readers pass judgement, with your comments, about whether or not a video is up to snuff–at some point we just need to draw a line in the sand. This is that line.

First, the positives about this accomplishment: great photos and from what I can tell, a really fast time.

But I agree with you, Red Bull really made this look pretty lame by overhyping and comparing it to a ride around Central Park in NYC. Maybe they could have turned it into a race instead? That could have been interesting…

Yeah, that’s way more entertaining! Also, note the lack of a sensationalized headline on this 2010 video.

Couldn’t agree more! Self sufficiency is key and the athleticism that mtb/ fat biking takes is in a whole different league than road riding.

This may be a bit off topic but I see too many roadies trying to jump on this mtb train lately. You see them out on the trails completely clueless. I came across a guy a few months back riding a brand new Santa Cruz 5010 in spandex and road bike shoes rubbing his sore arms and asking us “how the hell do we climb up these kinds of hills? How do we go down? Is there any trail that doesn’t have rocks and logs on it? How do you not get bounced off the bike? How come I can’t stand up to climb? I can ride a bike damnit! I’m a trophy winning collegiate road racer! I can power up climbs! I don’t understand why these bikes are impossible to ride!”
True story no exaggeration. When we tried to help explain a little technique to him my buddy gave his front tire a squeeze and asked how much pressure he was running. His reply was 60 lbs! He heard that you need lower pressure on a mtb so he decided to drop it down from 90!! All the while rubbing his sore arms. I’m not making this up this is a true story.
While I applaud them for trying out our sport folks need to understand how different it is from casually riding a bike down the street or from road riding. The same rules don’t apply.

A supported ride up a mountain by a pro roadie with all the road race trappings does nothing to explain what our sport is about and will simply encourage more foolishness like the tale above. That guy was so lucky he was in one piece. It needs to be understood by everyone in the media that road biking and mountain biking are entirely different sports.

First rule of mtb… Is be prepared, self sufficient, and educated.

Excellent point. I kept wondering why he would want/need all that support. I had failed to consider that he was a roadie, and it’s standard roadie procedure to have chase cars carry anything you need. That also makes sense why he said he could bail any time he wanted to.

All that support seriously detracts from the accomplishment.

I’m not quite at the level of outrage over this as this article seems to get to, but I do agree though that this short clip of an almost 8 mile ride pales in comparison to the accomplishments of people who do something like the 1000 mile Iditarod self supported race.

Coincidentally there’s a great interview Fatcyclist.com did with someone who is doing that race: http://www.fatcyclist.com/2016/01/19/jill-homer-on-the-fattycast/ The challenge with highlight that endeavor is actually discussed in the podcast and its an interesting take in my opinion. The problem lies in that there is just no easy way to make a video that tells the whole story for a race like that. The true problem, is if you were going to make a video that is representative of that race, you need somebody to shoot it while riding by themselves. Then you have to figure out how they can even carry that equipment and all their regular stuff, and also power it and keep it safe from the elements.. No small task.

I think you make a good point. If a video even exists of an endurance/survival feat, then how tough was it to begin with? I guess what I’m saying is, the true endurance accomplishments happen at the edge of a human’s abilities and dragging a camera along sucks up some valuable energy that could’ve gone into accomplishing something even bigger.

Another related issue is that no one wants to watch a video of a sufferfest–it’s painful to go through and nearly as painful to watch. The videos that tend to grab the most attention are fast paced and full of action, not of somebody gritting their teeth at the edge of exhaustion.