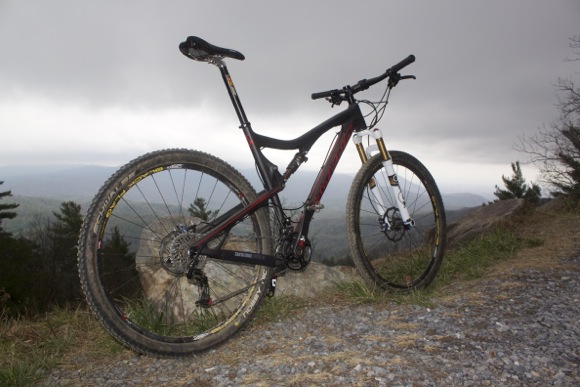 A 100 mile mountain bike ride is totally doable – you just need to train for it. While there are plenty of training plans out there, I’d like to share my finisher’s plan for those who, like me, are only competing with themselves. Let’s face it – racing 100 miles is out of reach for most of us but riding 100 miles on a mountain bike – we can do that. No excuses.

I don’t have time to train for a dirty century.

Truthfully, no one has time to train for a dirty century. Even professional athletes spend less time training than you might think and everyone suffers at some point during the race. We all wish we could train more but there isn’t enough time.

In the early weeks of your training plan the time commitment is pretty minimal – 6 to 8 hours for the whole week. For 12 weeks I basically rode just twice a week – one 25 mile ride on Tuesday nights and a long ride on the weekend. With a job and a family, the Tuesday night ride was the best I could do during the week and I often started my long weekend ride before sunrise so I’d be done by lunchtime. True, toward the end I was spending most of the day on the bike but that was really just a couple times.

I’m not in good shape.

Duh – that’s why you need a training plan. My plan was only 12 weeks long which in hindsight wasn’t quite long enough (see what I mean about always wishing you had more training time?). Before my plan officially started I built up a base by going on a few long rides – 20-30 miles, up to 4 hours at a time. You may need to work up to this if you don’t ride a lot so plan accordingly.

Ok, now that you’re out of excuses it’s time to get busy. You’ll want to come up with your own training plan based on your schedule and access to trails but here’s the jist: every week you need to do one progressively longer ride until you reach 75-80 miles on a mountain bike. Road bike miles aren’t the same so if you plan on riding on the road a lot for your training, shoot for 75-80% of thetime you expect it to take you to ride a dirty century. For example: if you think it’ll take you 12 hours to ride 100 miles off road, your longest road ride should be at least 8 hours. My longest ride before the race was 71 miles in 8.5 hours.

Start mapping out your training schedule by choosing the distances for your weekly long ride, keeping in mind that you don’t want to increase your mileage more than 10% from week-to-week. It’s also a good idea to plan for a “recovery” long ride every third week that decreases your mileage 5% or so. Here’s an example:

For my own training plan I neglected to include recovery weeks which resulted in a crunch for time toward the end. Don’t build your training plan with a specific timeframe in mind – start with the distances and work backward. If you set up your distances correctly you’ll end up with just the right amount of time you need. Start tapering 2-3 weeks before the race; I suggest 60 miles for the second-to-last long ride and 40 miles for the ride the week before the race.

In between your long rides it’s really up to you and your schedule to see what fits. For some, bike commuting five days a week could be enough. For others (like me) a single 2-3 hour ride is all you can swing. Or maybe you can do two 1.5 hour rides after work. Overall I’d recommend getting in at least half as much riding during the week (total) as your long ride on the weekend.

Cross training is helpful but I wouldn’t count these workouts toward your saddle time. I found some time to jog every now and then during my 12-week plan which made the long rides feel better than on weeks I didn’t jog. Experiment and see what works for you.

My training log from Strava(my plan officially began in February).Note the progressively taller spikes leading up to the last one, April 30. The really short bars are jogs.

A solid physical training plan is an important part of meeting your goal but for me, mental conditioning was just as important. During some of my longer rides I often found myself feeling like I wanted to quit or that I couldn’t keep going, especially around the 2/3 point of the ride. Sure enough, looking at my speed data back at home I could see a dip in my pace at that point and a “miraculous” recovery to end the ride. Clearly my body wasn’t giving up – it was my mind – so I needed to be aware of that during the race.

Imagining myself finishing the race was a helpful visualization and I also promised myself I wouldn’t quit, no matter what. In fact I planned to put a set of lights in my last sag bag in case it was going to be dark, even though darkness would mean an official DNF. It was important for me to finish, no matter how long it took so I never even entertained the thought of quitting during the race.

Nutrition during long rides and the race itself is key. Pro riders recommend taking in 400 calories per hour which is a ton – a single Clif Bar has just 250 or so. Sugary sports drinks can get you the rest of the way but remember – 10 hours on the bike is a lot of Clif Bars and Gatorade! Long training rides offer a great chance to experiment with different snacks to see what works for you. During one road ride I stopped at a gas station and bought beef jerky which turned out to be great! Who would’ve thought…

Now, even with the perfect training plan you’re going to run into snags. Injuries, bad weather, and even unexpected schedule changes can throw a wrench into your plans. If you can’t do your long ride for whatever reason, try doing two medium-length rides on consecutive days and adding a little distance/time. I ended up using this trick toward the end of my training and it actually worked well. Instead of a single 9-hour mountain bike ride, I did two 5-hour rides on consecutive days and man, the second day was tough! You may even want to incorporate a few back-to-back days into your plan from the beginning.

Finally, try to incorporate race conditions into your training rides. If your race is being held in the mountains, make sure to add hill training and plenty of elevation to your rides. If it’s going to be hot, don’t do all your training rides in the morning – spend a few hours riding in the heat of the day to condition yourself.

Riding 100 miles on your mountain bike is a big accomplishment precisely because of the dedication it takes to get there. Putting together a training plan and a finisher’s mindset is critical to reaching your goal.

Coming soon: a list of major 100-mile mountain bike races with key stats like elevation gain, dates, and locations so you can commit to riding a dirty century!

Singletracks
Get Ready for a Bikepacking Adventure with these Gear Picks
Gear
What is 'Too Heavy' for a Mountain Bike?
Videos
Enduro Racing from a Photographer's Eyes [video]
Gear
4 Mountain Bike Saddles, Reviewed for 2020 [Review]