Some of you may know I’ve been busy training for my first 100-mile mountain bike race, the fabled Cohutta 100 on April 28. The race is now officially sold out with 305 registered riders and as the National Ultra Endurance Series opener it promises to be an exciting event. With 57 days to go I wanted to share my progress so far in terms of equipment, fuel, and my engine. 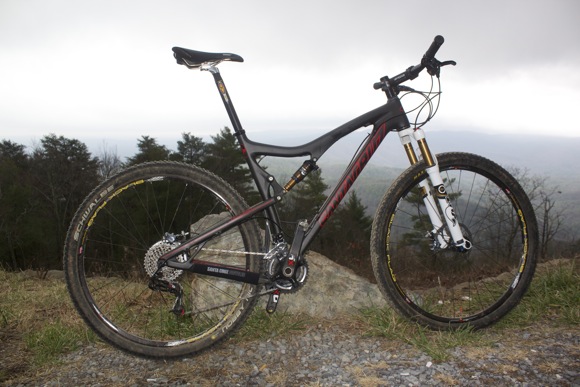 Before I started training I really wasn’t sure which bike I’d be riding in the race: my 1×9 hardtail 29er or my 2×10 full-suspension 29er. The hardtail is obviously lighter and climbs better and I figured if the gears weren’t enough I could even switch the 2×10 drivetrain over. Then I started my long training rides and realized it was a no-brainer: I’ll be riding my full-suspension Santa Cruz Tallboy. Spending hours in the saddle can be brutal and having every extra bit of cushion helps. I feel like I can ride all day on my Tallboy which is good because it will take me all day to ride 100 miles. Plus, at 26.5 pounds the weight penalty over my hardtail is pretty minimal.

I’m up to 5 and a half hours for my training rides now which means I need access to a lot of water. Before I started training hard I had been riding without a hydration pack, just using bottles for water and my jersey pockets for tools. Now that my rides are getting longer, I need to bring more gear (extra clothes, lots of food, tubes, etc.) so I found a compromise. Water goes in bottles on the bike while all the gear goes into my Osprey Raptor 6 pack. I took the hydration bladder and stiff inserts out of the pack, making the whole thing super light and hardly noticeable during the ride.

Two water bottles isn’t nearly enough hydration for rides longer than about 3 hours so I’ve been designing my training routes to loop back to the car every 15-20 miles so I can refill my bottles. After a long climb up to Cooper’s Gap during my ride yesterday, I was stoked to find an unlocked Army water buffalo at the intersection with the Appalachian trail. I filled up my empty bottle and kept going which allowed me to stay away from the car a bit longer. 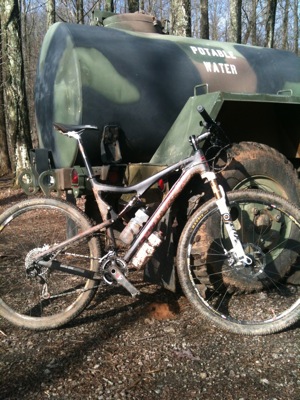 Now I’ve never been a big ‘ipod rider’ but on some of the longer rides it’s been helpful to listen to some tunes along the way. I keep the volume low so I can hear cars crunching the gravel roads behind me and it’s been fun to use my iPhone’s camera to take pics and post updates to Facebook.

This is the area where veteran riders suggest focusing the most and over the first several weeks of training I’ve learned a lot. I don’t do gels and sugary drinks can get old quickly so I’ve been packing Clif Bars, PB&J sandwiches, and plain old water. During my first 4+ hour ride, I was hungry near the end so I packed an extra bar for the next ride. On the next ride (4.5 hours) my legs started cramping at around the 4-hour mark so I knew I needed to add some electrolytes to my trail diet.

At Interbike last fall I picked up an electrolyte product called elete that claims to provide “nutrients for hydration, heat tolerance, muscle function, and energy conversion.” I mixed about 1.5 teaspoons of the stuff in two of my water bottles before yesterday’s ride and starting drinking it early and often. The stuff tastes pretty bad (salty plus sour) but the idea is it provides the electrolytes in a sports drink without all the sugar (which covers up the bad taste). The upshot: no leg cramps yesterday despite high temps in the mid 70s and 5,700 feet of climbing. I’ll definitely be spiking my bottles with elete on upcoming rides. 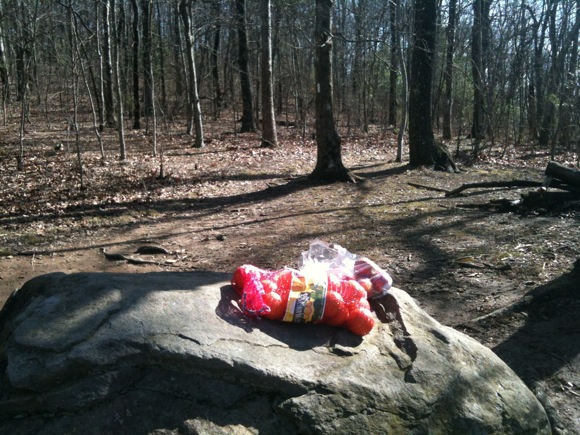 I’ve been trying to eat an energy bar or sandwich every 1-1.5 hours during long rides and that starts to get old after the third or fourth bar. Yesterday I stashed a banana with my water at the car and I also got lucky, finding bags of apples and oranges near Springer Mountain, left by “trail angels” for Appalachian trail hikers. Neither bag was open yet so I helped myself to an apple and made a mental note to pay it forward another day. Sometimes you gotta take advantage of whatever fuel you can find.

Aerobically things are going great so far and I’m finishing my training rides strong. However, my legs are the weak link at this point, though slowly getting stronger. I’ve found that going for a short recovery ride (an hour or less) a couple days after my long ride makes a BIG difference.

Legs and lungs are a mountain biker’s engine but your onboard computer (brain) can be just important to a successful training ride. I already mentioned listening to music during the ride but I’ve also tried to incorporate some exploration into each of my rides so far. At Harbins Park I rode the new loop for the first time then biked on the road to Tribble Mill, something I had never done before. At Bull Mountain I took a detour past the entrance to Winding Stair and checked out the Springer Mountain trailhead, the southernmost point on the Appalachian Trail. And on a local ride starting at my house I explored an overgrown trail network behind a school I didn’t know existed.

Looking over the data from my long rides so far it’s clear I need to reduce the amount of time I spend stopping for things like eating, adjusting gear, etc. I’m getting better at eating and drinking on the move but there’s still plenty of room for improvement. Incorporating a few long road rides should force me to keep up continuous movement.

I also need to incorporate more climbing into my training rides. Yesterday’s ride was my first in the mountains and even though I rode 30 minutes longer than last week, I still clocked the same number of miles. The Cohutta 100 course claims to cover 14,000 feet of climbing so I need to step it up.

I’m pretty happy with my progress so far but there’s still a long way to go (literally). I’ve already learned a lot, dialing in my kit, working out nutrition, and focusing on my fitness – can’t wait to see what’s around the next corner!

Few questions that just crossed my mind: How many hours are you planning on for race day–10-12? What’s the longest ride you’re aiming to do before yous start tapering? How long do you think you’ll taper for?

I am in the same boat as you as far as training goes, but I have the advantage of being in a University setting currently. I have been greatly utilizing different resources of the Exercise Science and Athletic Training department to get a better idea for training. From these resources I have learned a few important things so far.

1. Try and increase your rides by 10 percent each week and every third week taper back 5 percent. Without this taper your body doesn’t fully recover.

2. Sounds like you have the eating thing down. Eat lots of carbs to keep your glycogen stores topped off. 60% of your daily calories should be wholesome carbs.\

3. Make sure to taper off to 75% and 50% respectively for the two weeks leading up to the event. You have already done the hard work at that point and you want to show up to the event fully recovered from the vigorous training.

I am a little behind you since the event I plan on riding won’t be for another couple weeks after Cohutta, but these tips seem very helpful.

Good tips treky! mudhunny actually said the same thing about increasing 10% and decreasing every third week based on her marathon training. I’ve also built two weeks into the schedule for tapering.

@MTBGreg – I’m shooting for 10 hours on race day. Not sure what my longest ride will be but I want to do at least 8-9 hours to feel comfortable.

I would try HEED electrolyte drink from Hammer Nutrition. It isn’t as sugary as the off the shelf drinks, but it has just a hint of flavor to make it go down easy. They are an official sponsor at 24 Hours of Moab, and I had zero cramps when I used it there. A friend of mine also uses it in the Leadville 100.

As for food, I always find ‘real’ food to be too time consuming, and if I happen to be at high altitude I can’t eat it. (I realize altitude is not an issue for your race) I use Hammer Gel in the 5 oz flask for on-the-bike nutrition and take a 1oz hit about every 30-40 mins, depending on the level of exertion. The flask drops nicely into a jersey pocket and can be worked with one hand while riding. I also stash Jelly Belly Sport Beans and Clif Shot Bloks for when I feel like chewing on something.

Another (non-food) tip I picked up from veteran racers: wrap some duct or gorilla tape around your stem. It WILL come in handy at some point.

Wow, you must be really lucky to ride somewhere where you can just find free water and food lying around 😛

Yeah robomekk, I think I got lucky because it’s “through hiker” season here in Georgia. All the folks who hope to hike the entire Appalachian trail this year are getting started right about now… I’m definitely not relying on these food and drink options for my training. 🙂

trek7k…keep the training informaiton coming in. After all is said and done perhaps you can sum it all up with what worked…and maybe what did not. Thanks for the info!

Hey that idea to taper off 5% after increasing 10% seems to work. I found out by accident as I have not been riding as much do to running out of time. I went out today and was expecting a lousy ride but it ironically was my best as my body needed to recover.

Another drink mix to consider: Gatorade G-Pro, only available at GNC I think. I mix 1 scoop per approx 25oz of water. Stronger flavor than HEED, but not as strong as regular Gatorade. I don’t like HEED, the flavor is too weak, tastes more like I didn’t clean the bottle/bladder well after using Gatorade last time. A lot of people do like HEED tho.

+1 to the gel flask. I can’t eat most solids while riding, I stick to gels and sometimes shot blocks. I like the espresso flavor and apple cinnamon flavors best.

I eat every 45mins. If I go longer than that I start fading quickly around 4hrs into the ride. Look into getting a small frame bag, there’s a few that mount on top of the top tube behind the stem, they’re great for storing food, and much easier to access than jersey pockets.

Sounds like things are going well! Keep it up, and stay injury free!

Oh, a question: have you thought about doing a 6 or 9 hour race as a training ride? Good chance to ride at ‘race pace’ in a race situation, but with support of having a pit every hour or so. There’s one at the Horse Park in two weeks….

Yeah, I thought about doing a 6 or 9 hour race, will have to look into the one at Conyers…