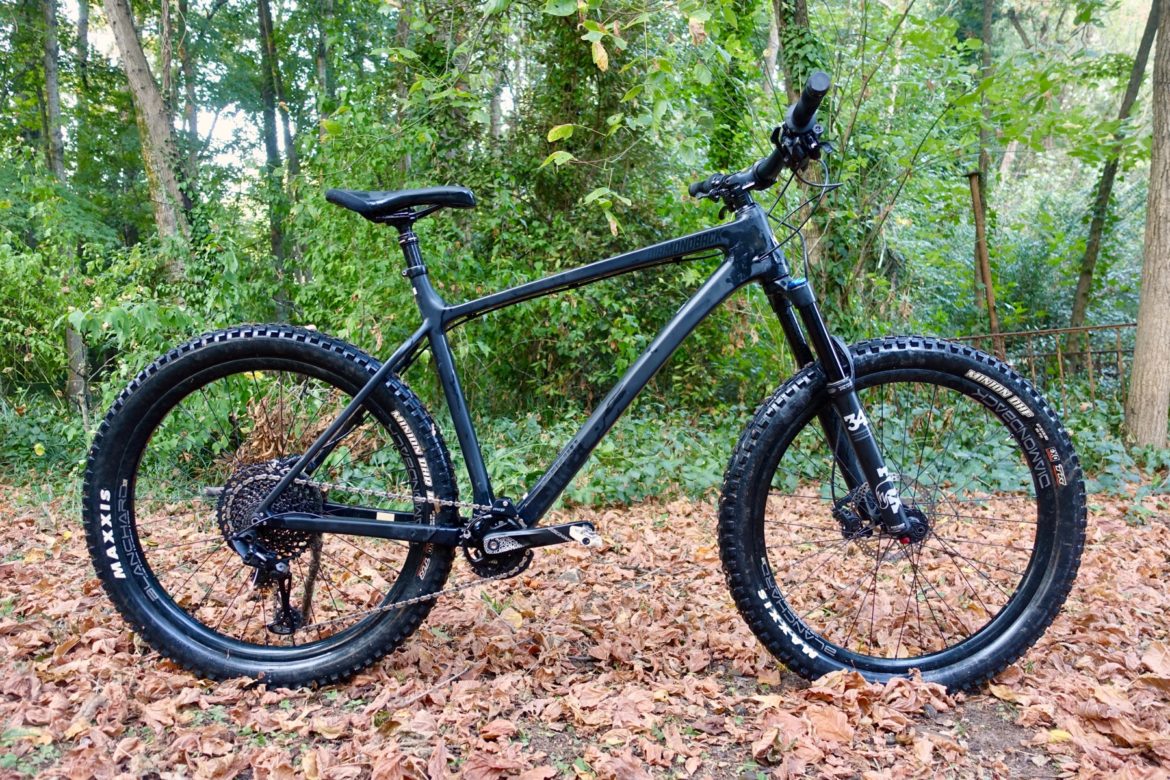 The Diamondback Sync’r Carbon is a carbon fiber, hardcore hardtail with a solid build kit and rugged good looks. I’ve been testing this bike for a couple months now, and here’s what I’ve learned. 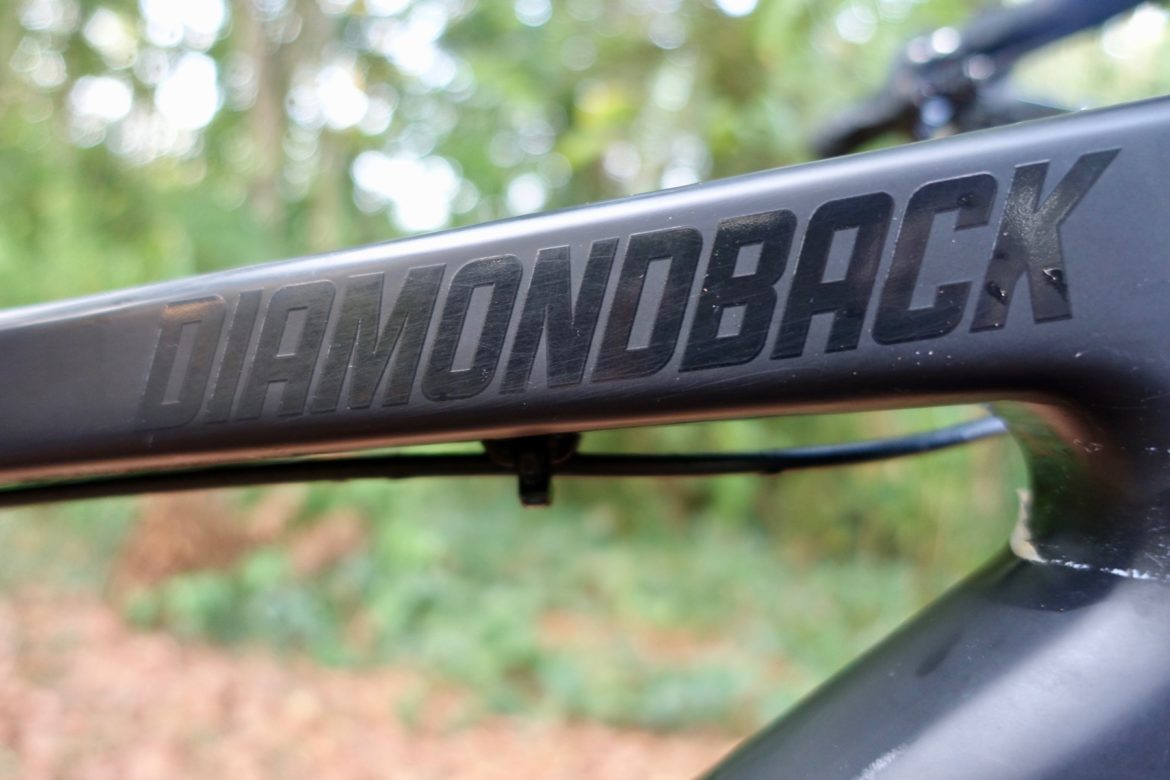 Diamondback is known among mountain bikers as a value brand, offering mostly alloy bikes — both hardtail and full-suspension — priced under $2,000. The Sync’r Carbon is just one of two carbon hardtails in the entire line, and at $3,000 for the complete bike, it’s priced $1,000 more than the brand’s other carbon hardtail, the Overdrive 29C.

Starting with the frame construction, the Sync’r Carbon has all the features buyers expect from a high-end carbon mountain bike frame: internal cable routing, monocoque construction, two water bottle mounts, and a threaded bottom bracket. Diamondback plays it safe with a matte black finish and black-on-black decals, with just a couple small pops of tan on the head tube, top tube, and inner chain stays. 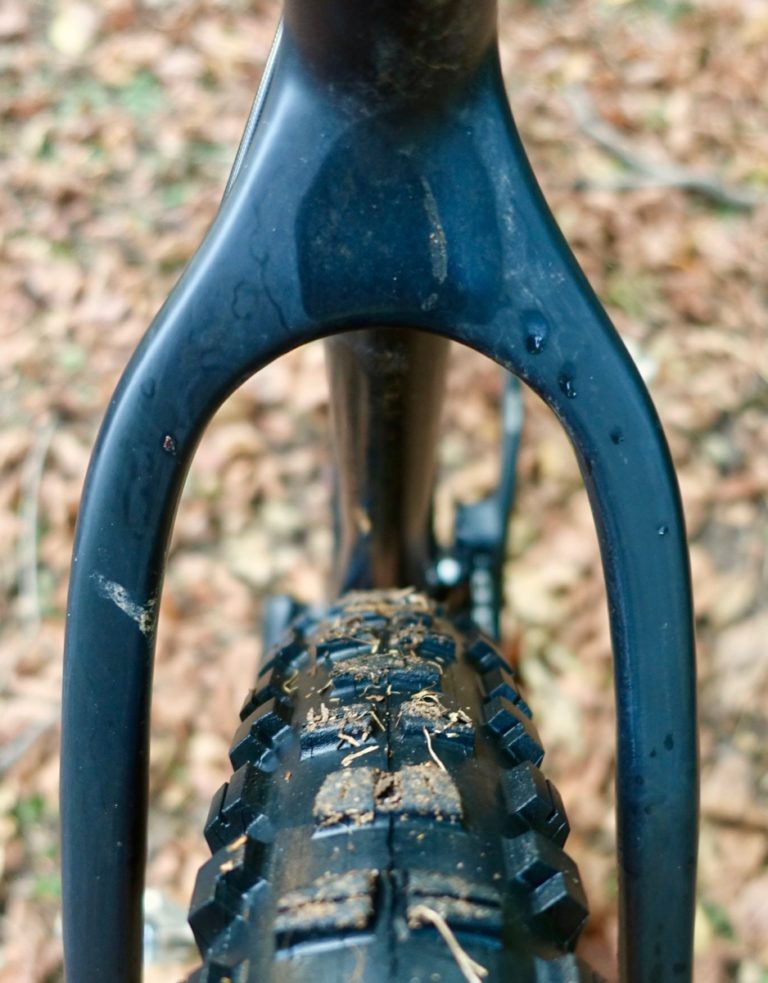 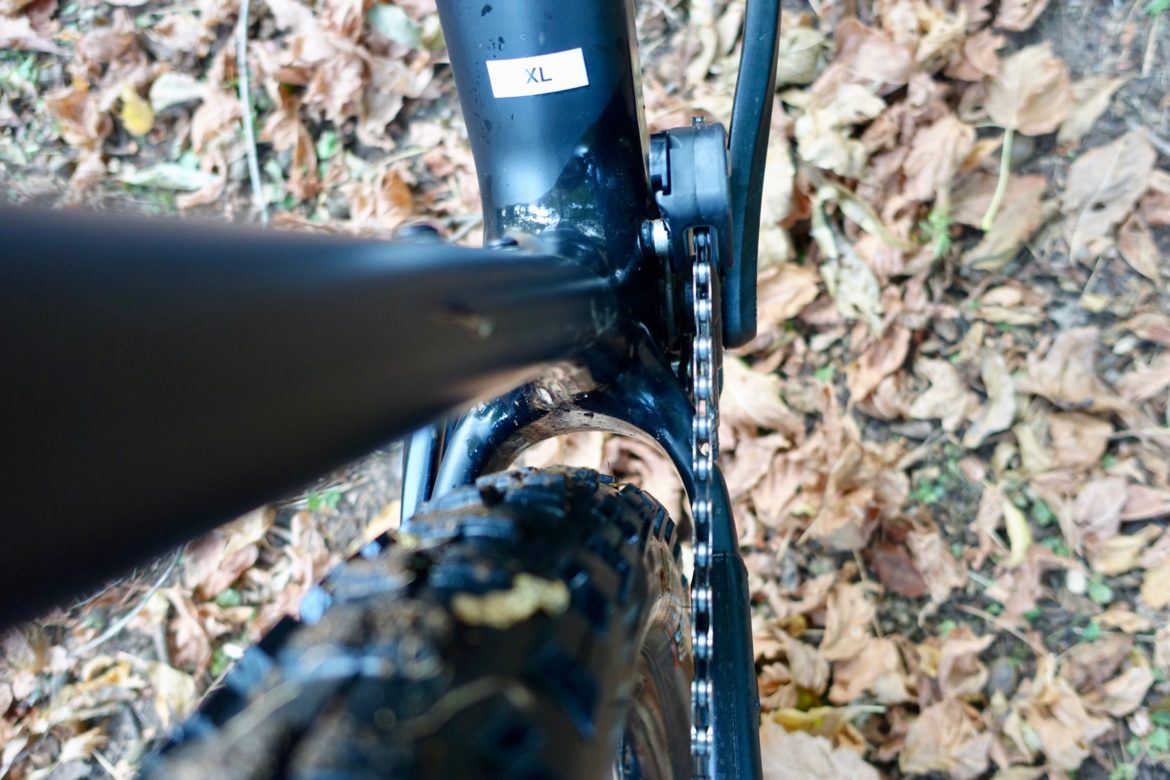 The geometry is fairly progressive, with a 66° head tube angle and a 74° seat tube angle. The bike is designed around a 140mm suspension fork and 27.5+ wheels, though eye-balling the rear wheel clearance, 29er wheels will probably fit easily. 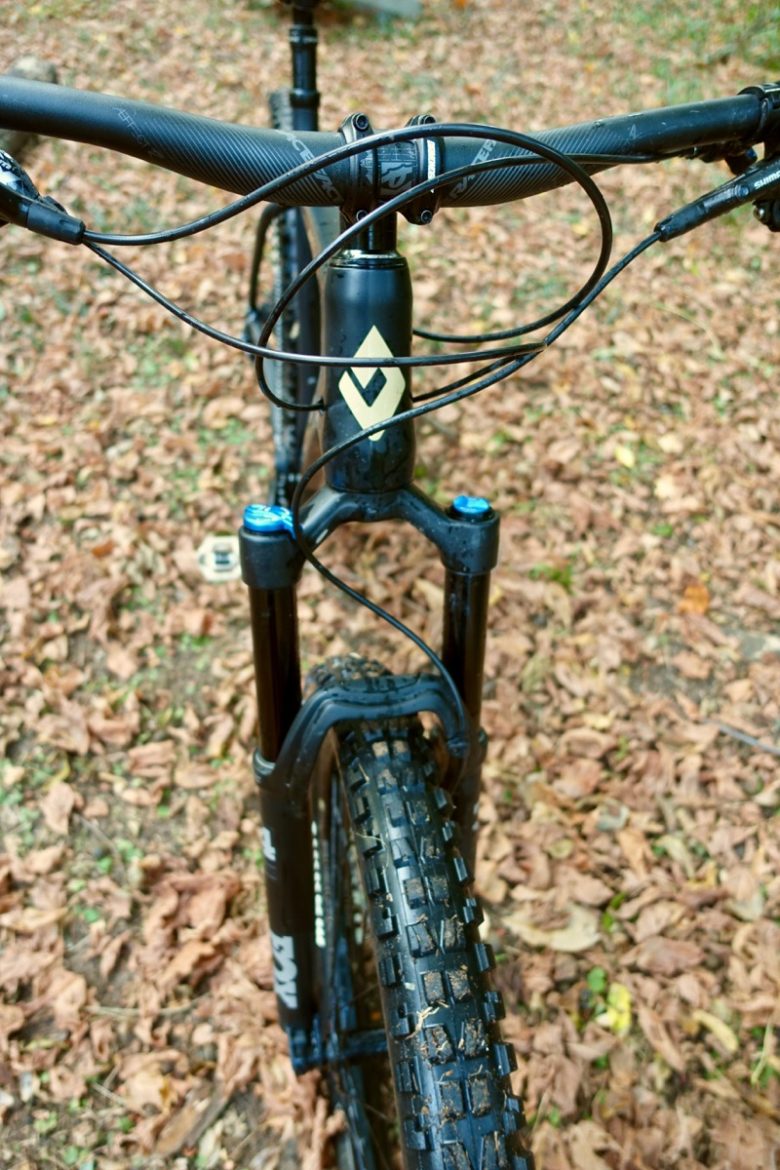 To keep bikes affordable, Diamondback builds generally top out at the mid-range compared to other brands. That means you won’t see blingy Kashima on a Diamondback, or race-light drivetrain bits. I like to imagine the the Sync’r Carbon build sits at the top of the price-performance bell curve, where upgrading any of the parts would result in diminishing returns.

Starting at the front of the bike, the Sync’r Carbon ships with a 140mm Fox 34 Performance fork with a FIT GRIP 3-position damper. The two-piston, Shimano MT501 hydraulic disc brakes grab a 180mm rotor up front and a 160mm rotor in the rear. 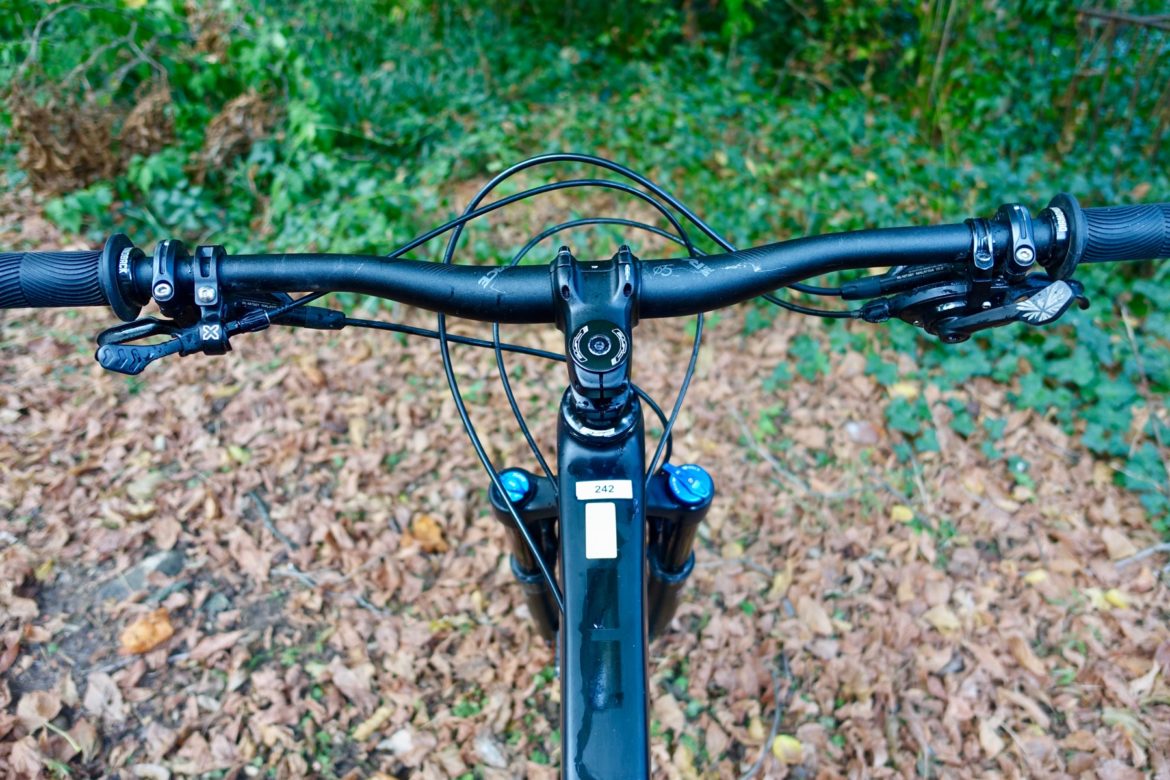 The 780mm alloy bars feature a 35mm clamping diameter for improved stiffness. Diamondback touts their new “flanged” lock-on grips, but I have to give these a big thumbs down. I can appreciate the throwback, playful style of flanged grips, but they just aren’t practical for working the shifter and dropper post lever. For my tests, I slapped on a fresh set of Lizard Skins Charger EVO grips and my thumbs were much happier. 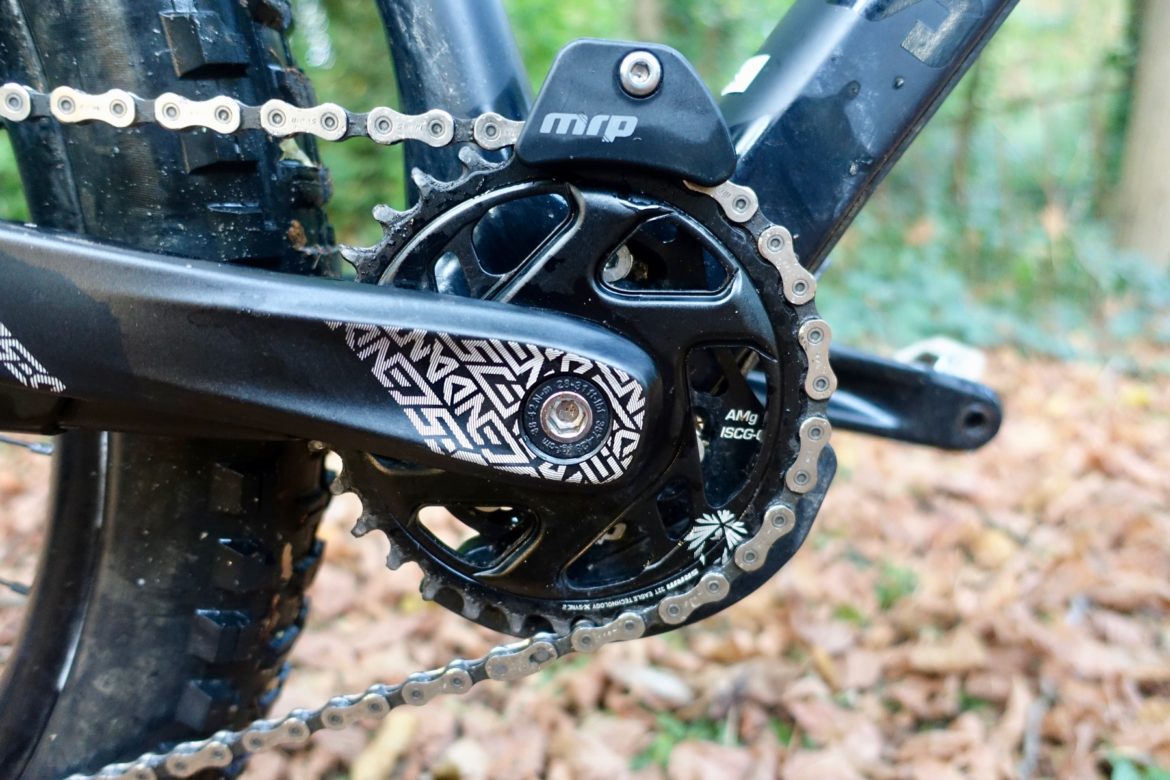 The Diamondback-branded saddle features fairly thick padding and a decent shape. However, I found the cover to be too slippery so I swapped out the stock saddle for an SDG Radar.

The saddle is attached to an X-Fusion Manic dropper post, offering 150mm of travel on size large and extra-large builds. The dropper lever is easy to use, though it does have a bit of play in it which makes it feel a somewhat cheap. 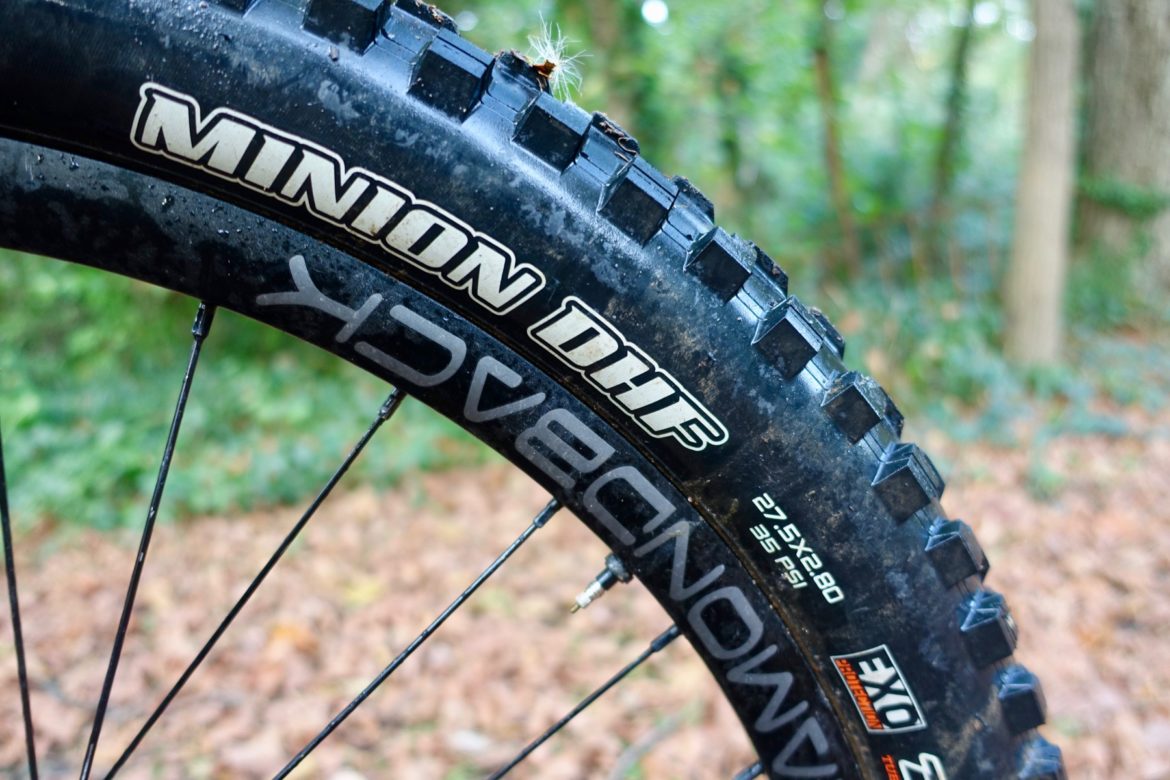 The wheels are built up with Diamondback Blanchard alloy rims and 32 steel spokes front and back. From what I can tell, the rear hub offers about 9-10 degrees of engagement.

Diamondback notes the wheels are tubeless-ready, and my build shipped with (heavy) 27.5+ tubes installed. Luckily I had a spare set of tubeless valves, though they were barely long enough to reach through the tall rim profile. Setting up the 2.8-inch, Minion DHF and DHR II tires tubeless at 19psi was a cinch with a little bit of sealant and an air compressor.

All told, with pedals on and the tubes removed, the size XL Diamondback Sync’r Carbon I tested weighs about 28.5 pounds. It feels a bit heavier than I expected for a carbon hardtail, but for a plus bike, it’s not bad.

Hardcore hardtails have a reputation as bikes that are better suited to rowdy parties in the woods than racing any particular discipline. Plus, since hardtails are less expensive than equivalent full suspension mountain bikes, they tend to attract younger riders with heavy hands and limited budgets.

Yet, I found the Diamondback Sync’r Carbon pushes back against this stereotype.

While the 140mm fork and 66° head tube angle are both long and slack as far as hardtails go, the Sync’r Carbon is surprisingly stiff and responsive to pedal input. In a way, it has a fairly racy feel to it, offering quick acceleration and precision in corners, even compared to other hardtails I’ve ridden this year. In other words, it’s not just the fact that the rear end is rigid; the Sync’r Carbon is also laterally stiffer than the others, making it a super efficient pedaler.

Going uphill, that pedal efficiency is welcome, especially to balance out the heavy, slower-rolling plus tires. The geometry provides a comfortable climbing position, and I found even longer climbs sailed by faster than expected. The 66° head tube and 74° seat tube angles ensure the front wheel tracks fairly well, yet intentional wheel lifts feel pretty effortless. (I’m getting almost decently OK at wheelies, and I put in a lot of practice on this bike.)

As a technical descender, the Diamondback Sync’r works great. The 150mm seat drop makes it easy to get back and low, and the wide tires roll through just about everything.

It’s rare to see anyone riding a hardtail in an enduro race, and for good reason. Hardtails just can’t track over rough terrain as fast and as confidently as a full suspension bike. The Sync’r, however, has a few tricks up its sleeve to let riders push the speed envelope.

For starters, the plus tires smooth out many smaller roots and rocks, and the 140mm fork soaks up larger hits. Plus, this build is just rugged. The chain guide may seem like overkill, that is until you bomb down the rocky trails at Coldwater Mountain as I did during my testing. There’s built in frame protection on the chainstays and underneath the downtube as well, allowing riders to push the envelope without worrying about wrecking their ride. 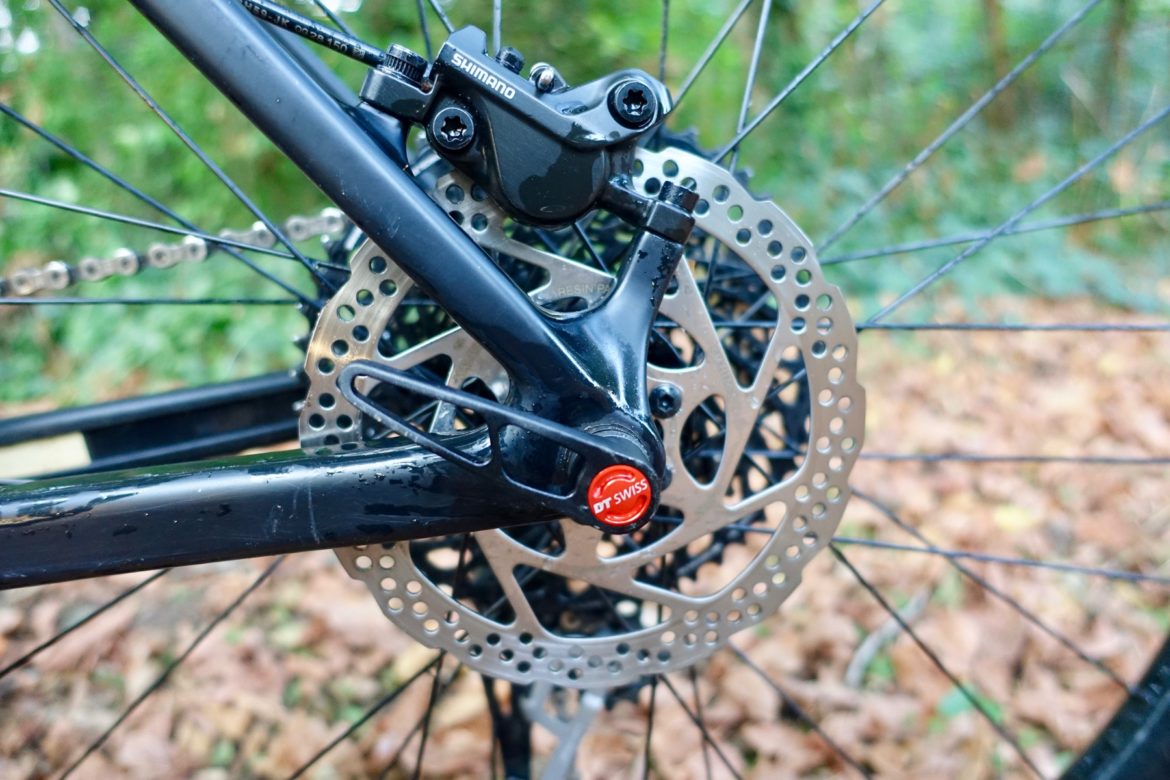 Perhaps the one area where Diamondback seems to have gone softcore is the brakes, choosing 2-piston stoppers over a 4-piston set. Additionally, while the stiff carbon frame is nice and light, it can feel a little harsh on descents.

Overall, the Diamondback Sync’r offers a solid build with components that maximize their price-to-performance ratio. The progressive hardtail geometry, paired with a rugged and durable carbon frame, should last most buyers through the next two upgrade cycles, at least.

Check out Diamondback.com, where the Sync’r Carbon is available for purchase, to get more info.

Gear
What is 'Too Heavy' for a Mountain Bike?
Trails
Surfing Duff, Making Connections and Chasing Foxes in McCall, Idaho
Gear
The Full-Carbon 2021 Giant Trance X Advanced Pro 29 is...
Singletracks
Get Ready for a Bikepacking Adventure with these Gear Picks