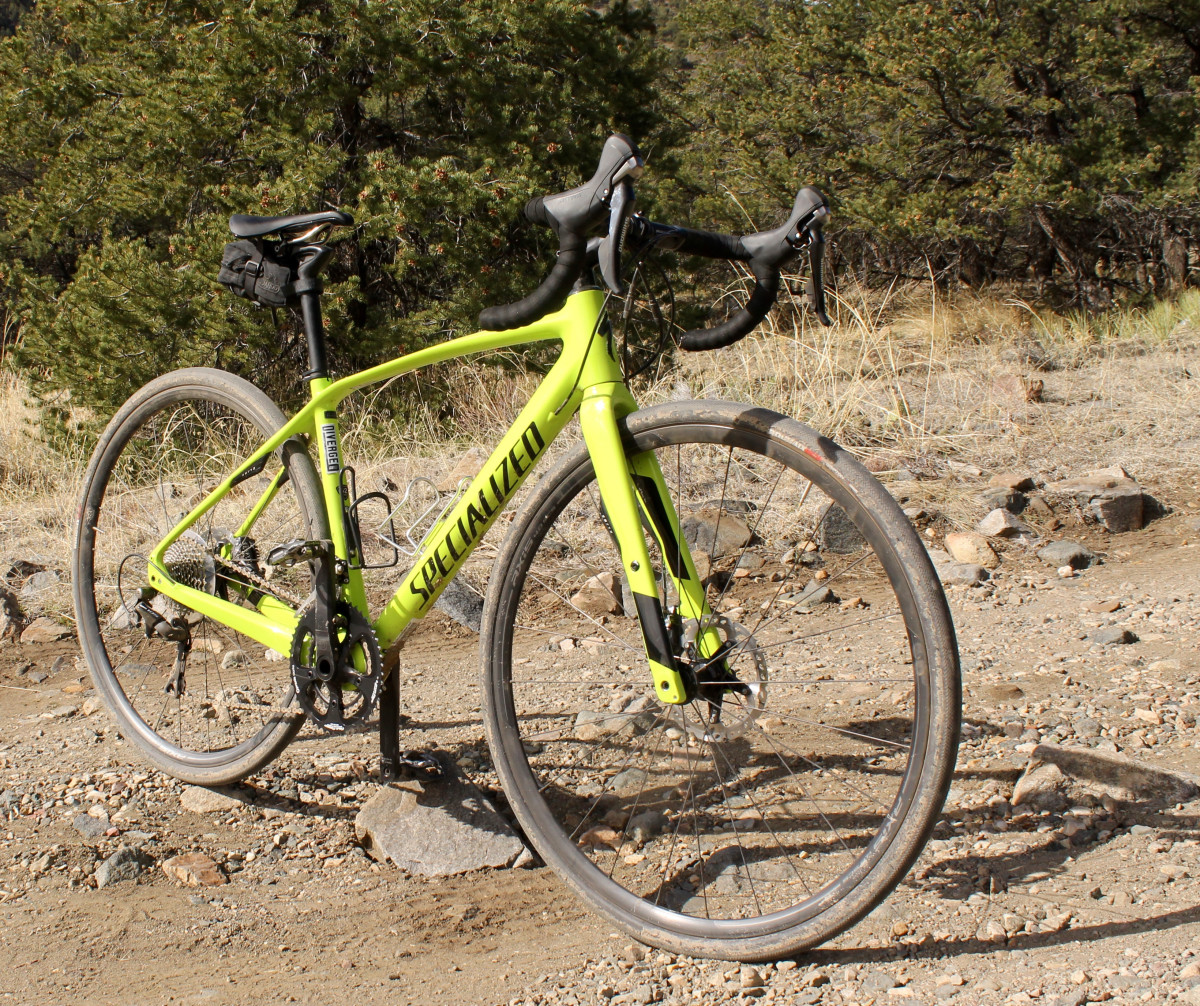 As I recovered from ACL repair surgery, the doctors told me that biking was great for my range of motion, and an excellent way to stay in shape with a vulnerable ACL. The catch? I couldn’t fall, or power out of the saddle, or do any intense movements on the bike.

In short, I was relegated to riding roads.

Being the rebellious boundary pusher that I am, on my first “road ride” after surgery–maybe a month before I was even supposed to be riding pavement, but shh, don’t tell my surgeon that–I found myself on a dirt road detour from my planned route. So in an attempt to do something more entertaining than flat pavement, yet not as daring as singletrack riding, I dropped by Absolute Bikes in Salida, CO to see what their gravel grinder situation looked like. 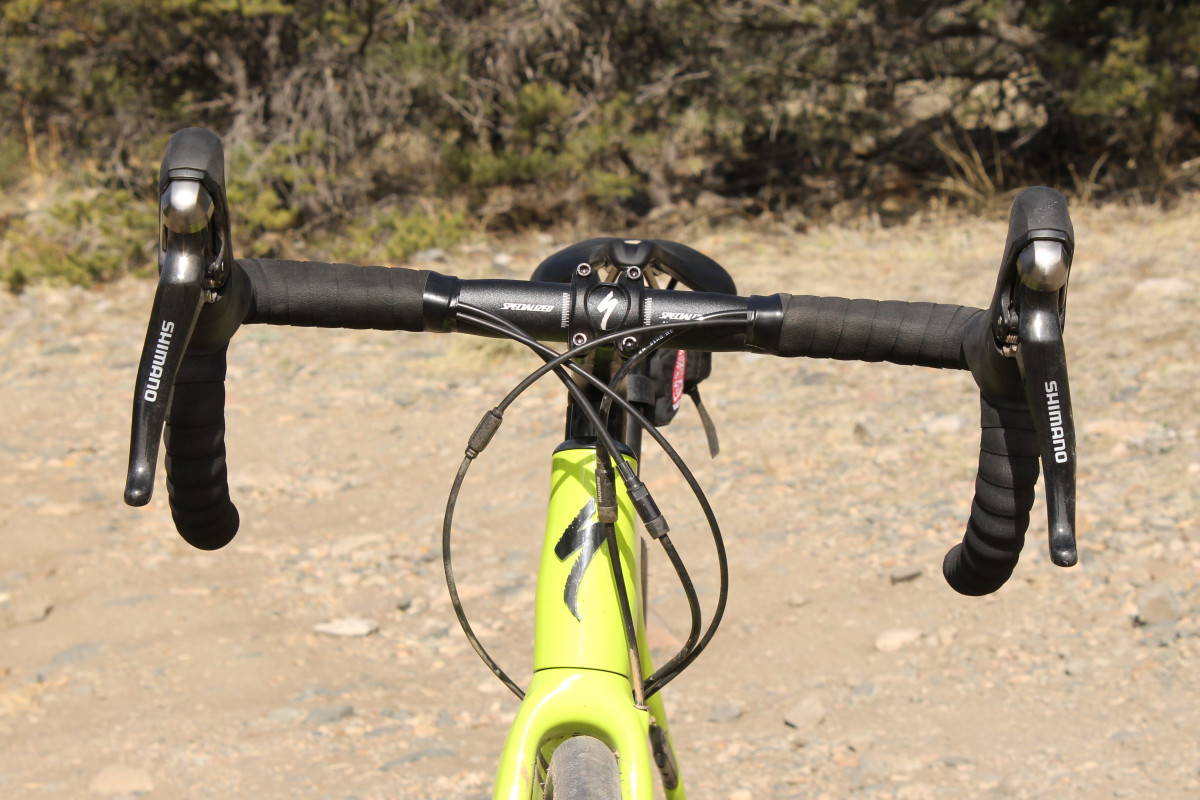 Absolute is home to an absolutely massive fleet of rental bikes. As a mountain biker I hadn’t really considered that they would rent anything besides mountain bikes, but after chatting with Shawn Gillis, Absolute’s owner and founder, about my plans, he informed me that they do indeed have an entire size run of drop bar gravel grinders available for rental. They also rent road bikes, townies, kids bikes, fat bikes, and any kind of mountain bike you could imagine–hardtail, full suspension, plus bikes, cheap, expensive, you name it. So if you’re ever in the Salida area and you need to rent a two-wheeled pedal-driven vehicle of any sort, Absolute Bikes is your one stop shop.

Shawn was kind enough to lend me a Specialized Diverge Comp adventure bike for a week of gravel grinding. 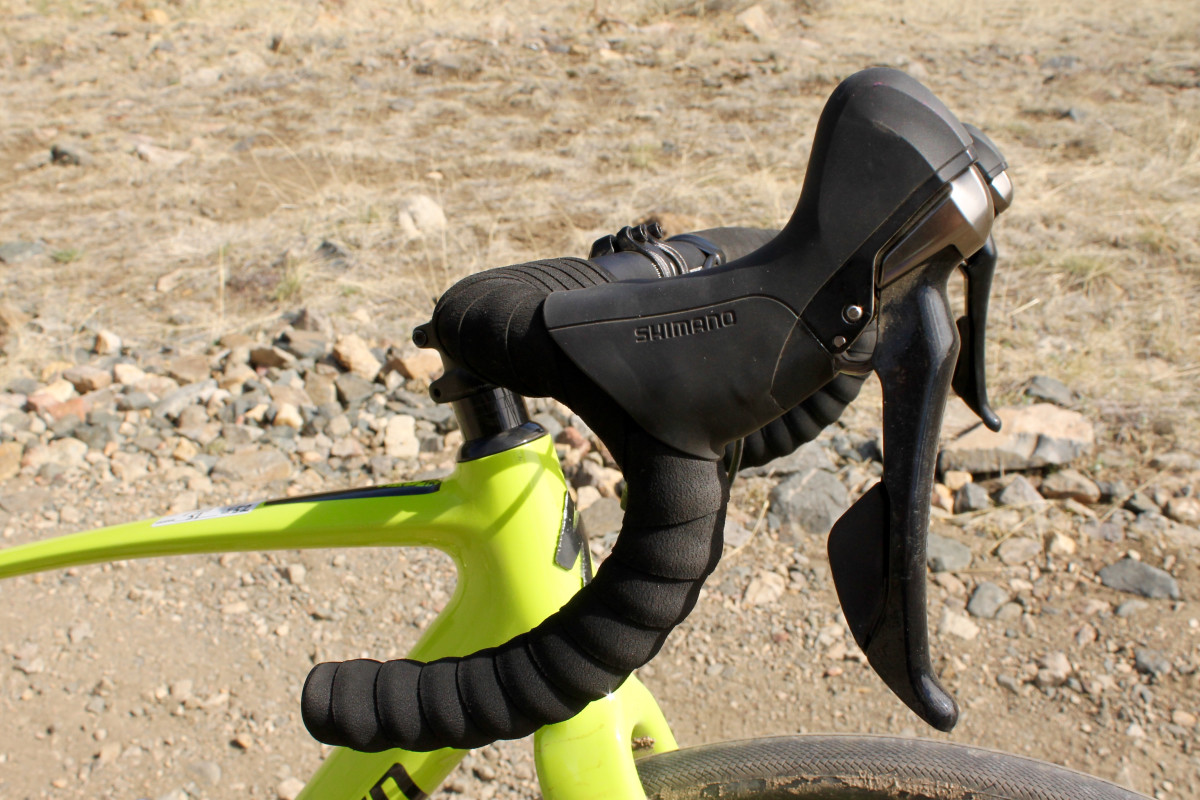 The Diverge Comp features a carbon frame and bladed rigid fork, with thru axles front and back, and disc brakes. In short, this is the latest-and-greatest in drop bar bike technology, with obvious cues and tech taken from mountain biking. The familiarity of the thru axles, disc brakes, and other bits almost made me forget that I was riding what was technically a road bike… almost. 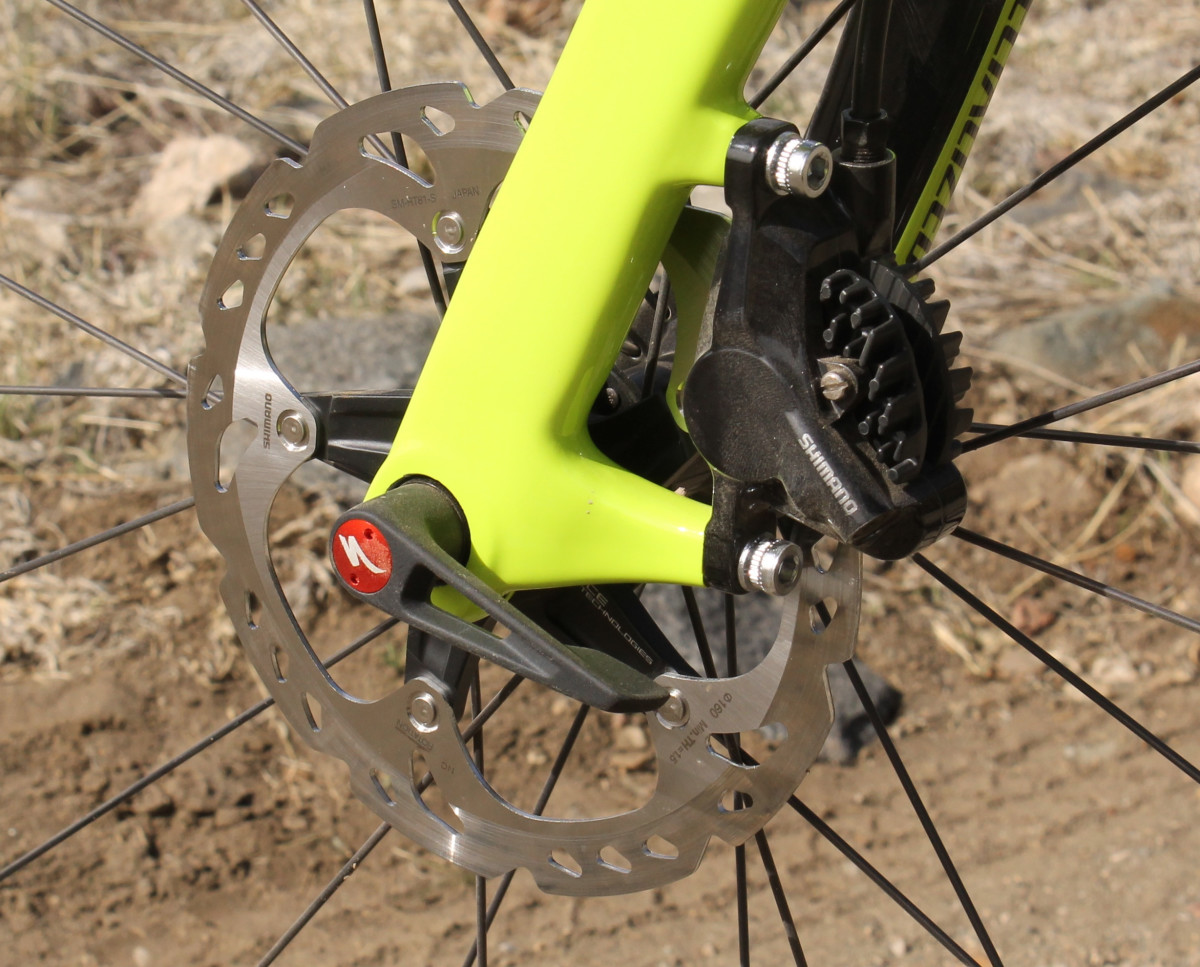 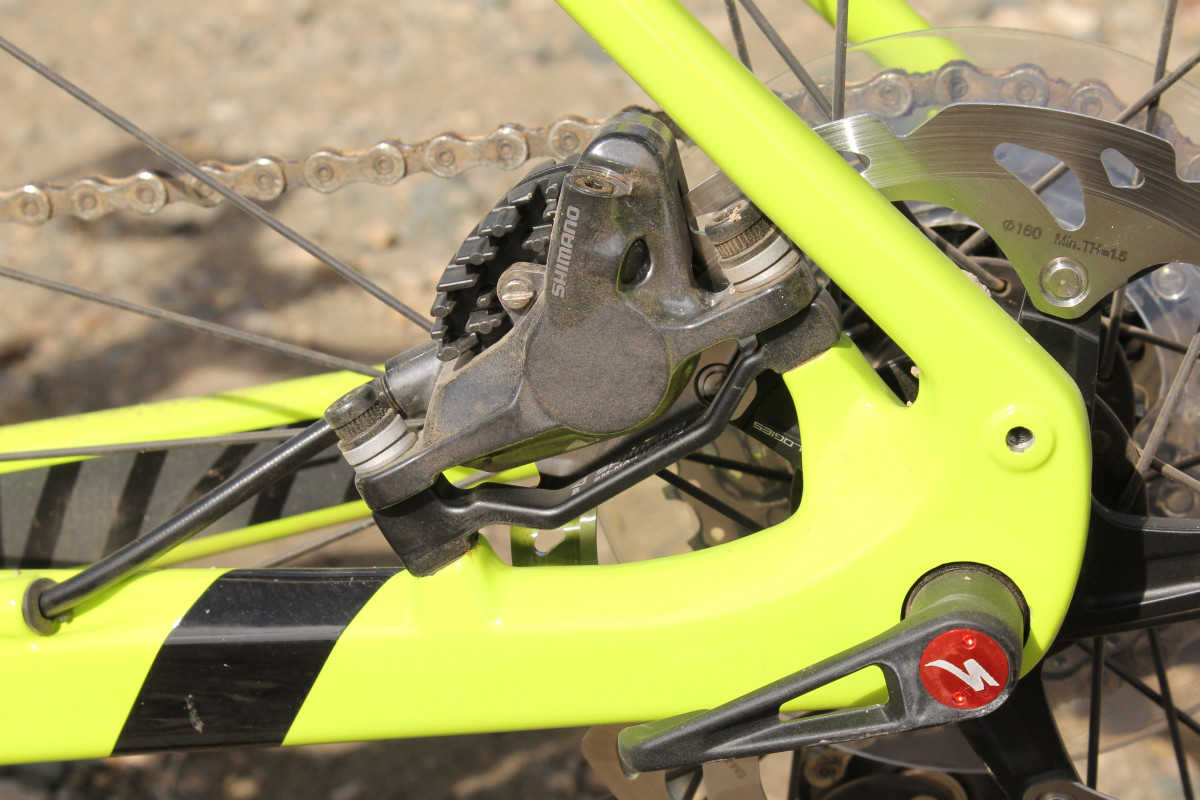 The disc brakes themselves are Shimano BR-785 hydraulics, and the shifting is handled by a Shimano 105 2×11 drivetrain, with a 50/34T Praxis Works crankset and an 11-32t rear cassette. 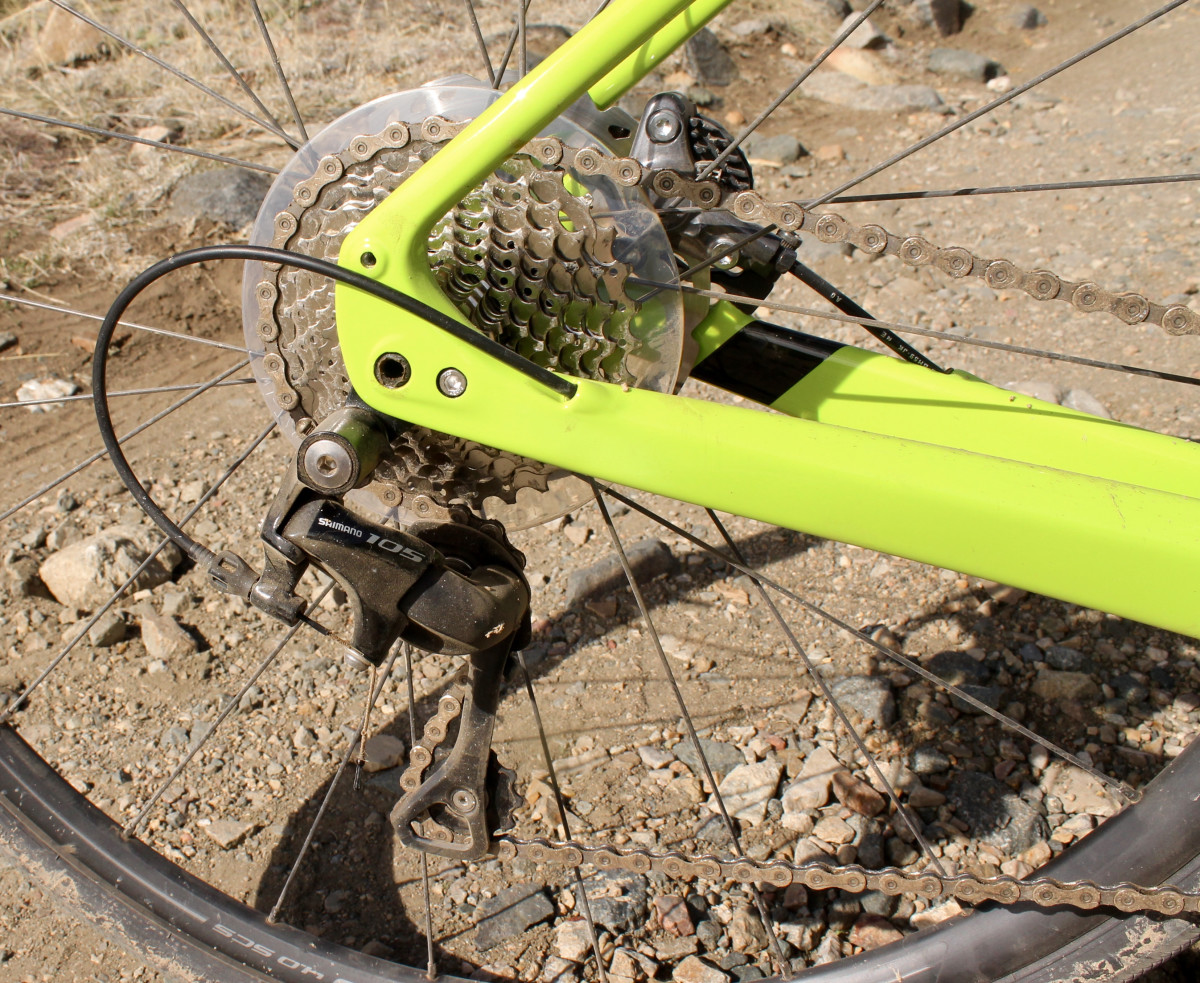 The wheels and tires are one of the key differences between an adventure bike, or all-road bike, and a classic road bike designed for pavement. The tires were Specialized Roubaix Pro, 120TPI, folding bead, BlackBelt protection, Endurant casing, 700×30/32mm; the wheels were AXIS 4.0 Disc SCS. 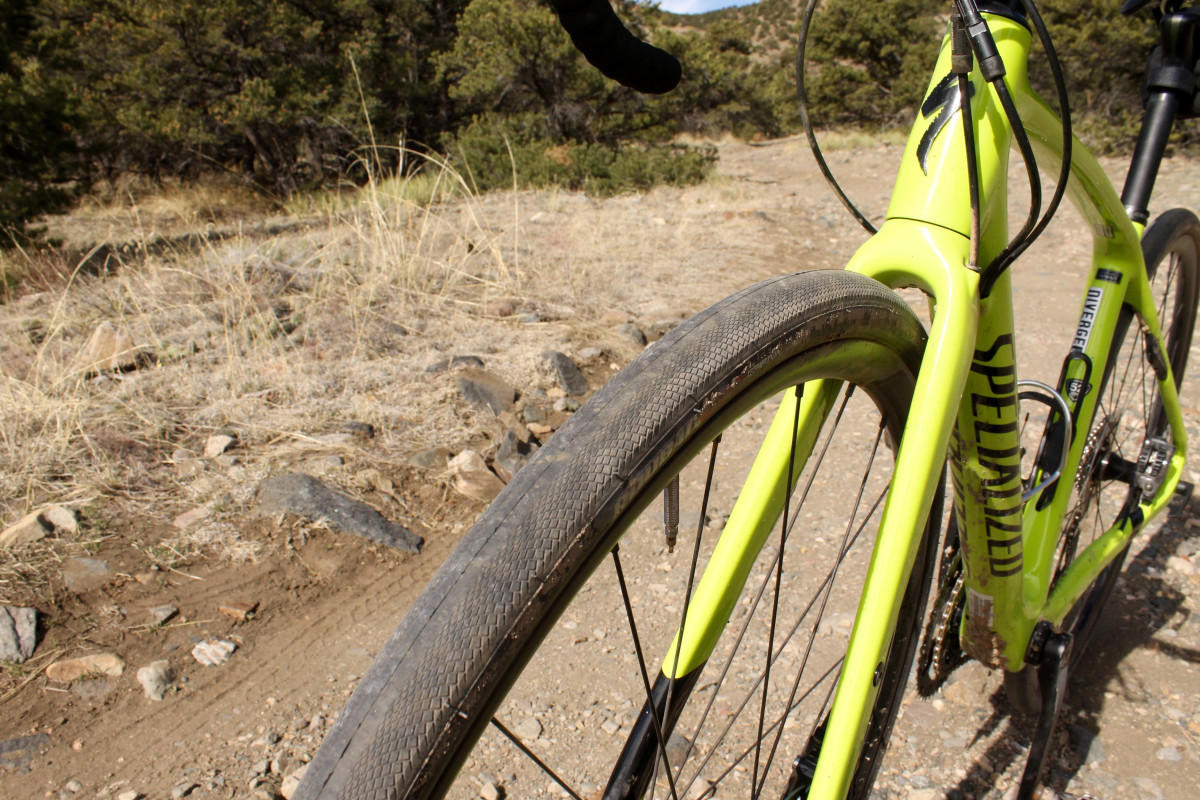 One other standout component was the Specialized CG-R FACT carbon seatpost. More on that in the review proper. 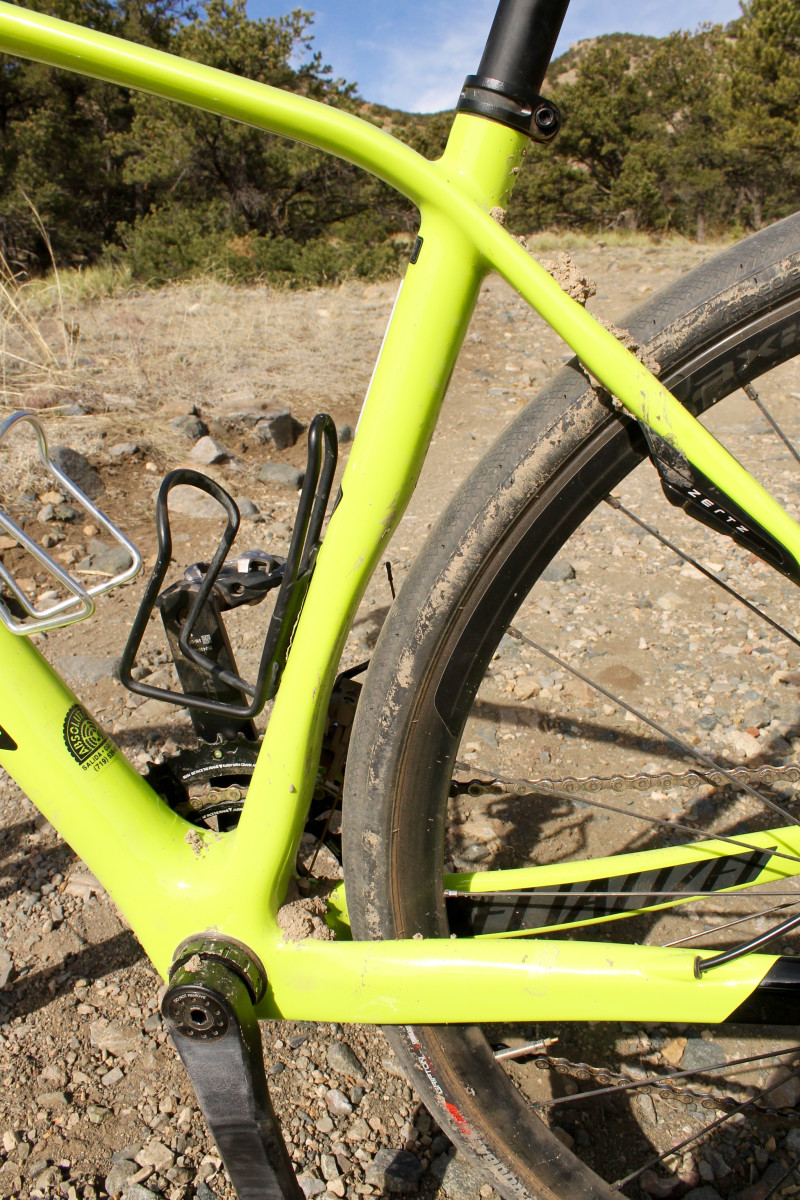 Out on the Dirt Road

Specialized refers to the Diverge as an “adventure bike,” but in recent years these sorts of bikes have gone by a variety of names, including: gravel grinder, gravel bike, all-road bike, and more. Whatever you choose to call it (adventure bike is actually gaining popularity with a variety of brands), these sorts of bikes are designed to tackle roads of all surfaces, including gravel, dirt, rocks, gnar, and yes, even pavement, if you so choose.

Historically, most riders would use a cyclocross bike for these applications, and frankly there are a ton of similarities between an adventure bike and a ‘cross bike. I was unclear about the actual differences, so I asked some skinny tire-minded friends for an explanation of the differences. In short, adventure bikes have a lower bottom bracket, longer wheelbase, and slacker head tube angle than a ‘cross bike. The components are also slightly different (tire tread, tire size, gearing, etc.), but to this mountain biker, the two types of bikes look pretty dang similar. So, due to my relative unfamiliarity with bikes of this breed, I decided to simply test the Diverge as-is, in its intended terrain. 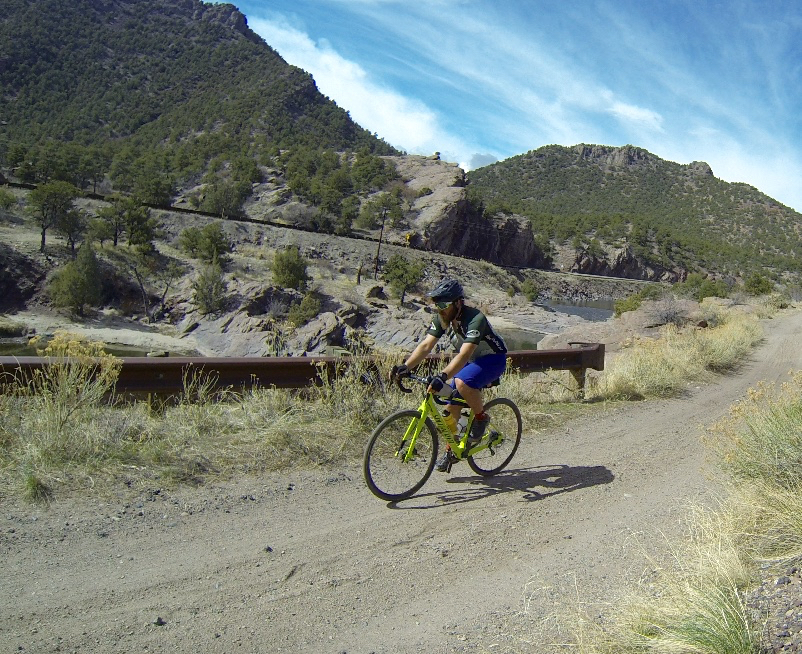 The larger volume tires of the Diverge proved surprisingly capable even from my first ride. I had been doing some gravel grinding on my standard road bike already, and instantly I could appreciate the smooth ride feel and decreased vibration that the Diverge provides.

While most of this is due to the larger tire volume and consequently, the ability to run lower tire pressures, the frame and the seat post also offer great damping. The carbon frame and fork helped smooth the ride, and the unique elastomer seat post isn’t just a gimmick. If you press down on the post, you can quite literally see the seat tilting down and back, soaking up the vibrations and impact. 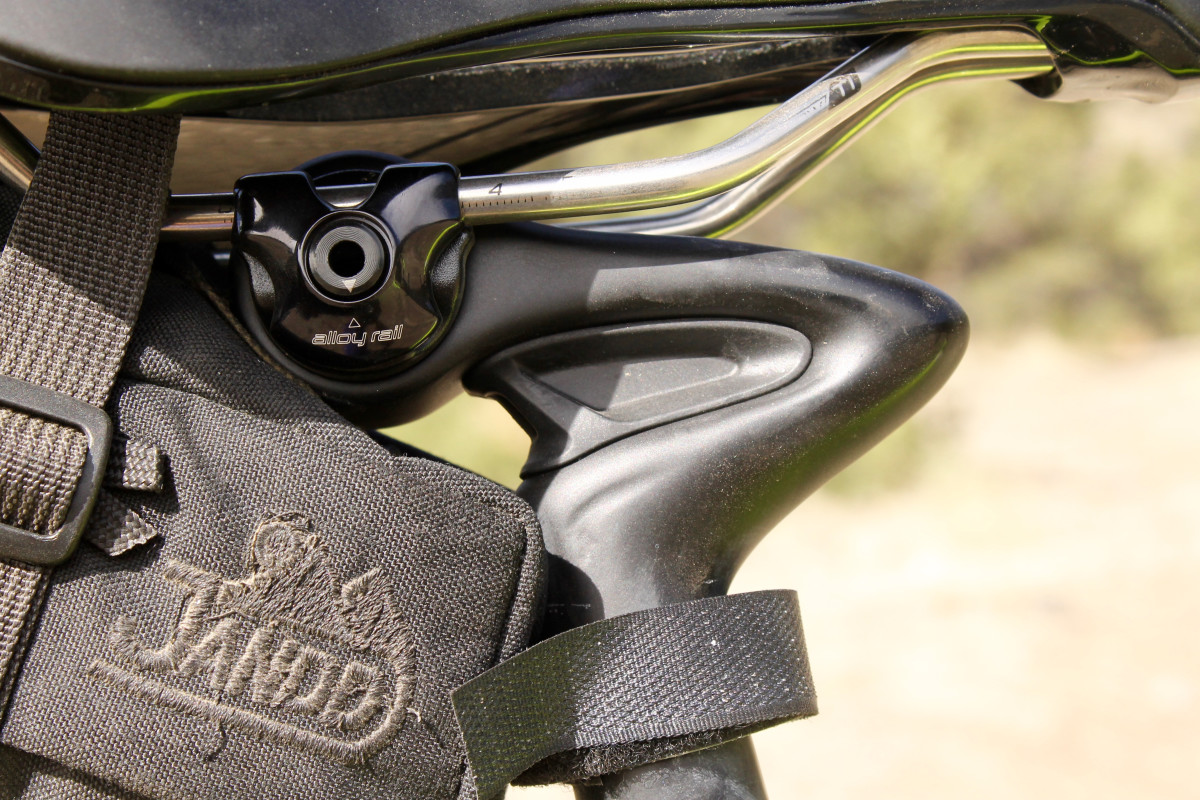 So the ride quality is signifcantly improved over a road bike—that should be obvious. But how adventure-worthy is this bike… really?

I tested the Diverge on a variety of surfaces, including gravel, hardpack, sand, mud snow, slabby rocks, rounded river stones, pavement, and just about everything you could imagine finding in even a primitive road surface. Through it all, the Diverge persevered, although it did have obvious limitations when compared to a mountain bike.

Once the going got too rocky, the skinnier-than-a-mountain-bike tire would skitter on smooth rocks and proved difficult—but not impossible—to control. That said, on one descent I nailed a dragon’s spine slab of rock sticking out of the road at top speed and not only did I not crash, but I didn’t pinch flat or break anything. Impressive.

I did find the smooth tread of the tires surprising. When slogging in mud, there was little purchase with this tire—but upgrading to something knobbier for muddy and snowy conditions is an easy solution for even the novice mechanic. While in loose and wet conditions the tires weren’t the best, they were surprisingly capable on gravel roads, providing confident cornering and gravel-crushing prowess.

While the stock tires weren’t set up for mud, the frame and components are ready for it. I had plenty of tire clearance to evacuate the mud, and since the bike comes stock with hydraulic disk brakes, not only did I have plenty of stopping power totally unaffected by the muck, I experienced absolutely no wheel-stopping mud build up like you might on a classic cyclocross bike. 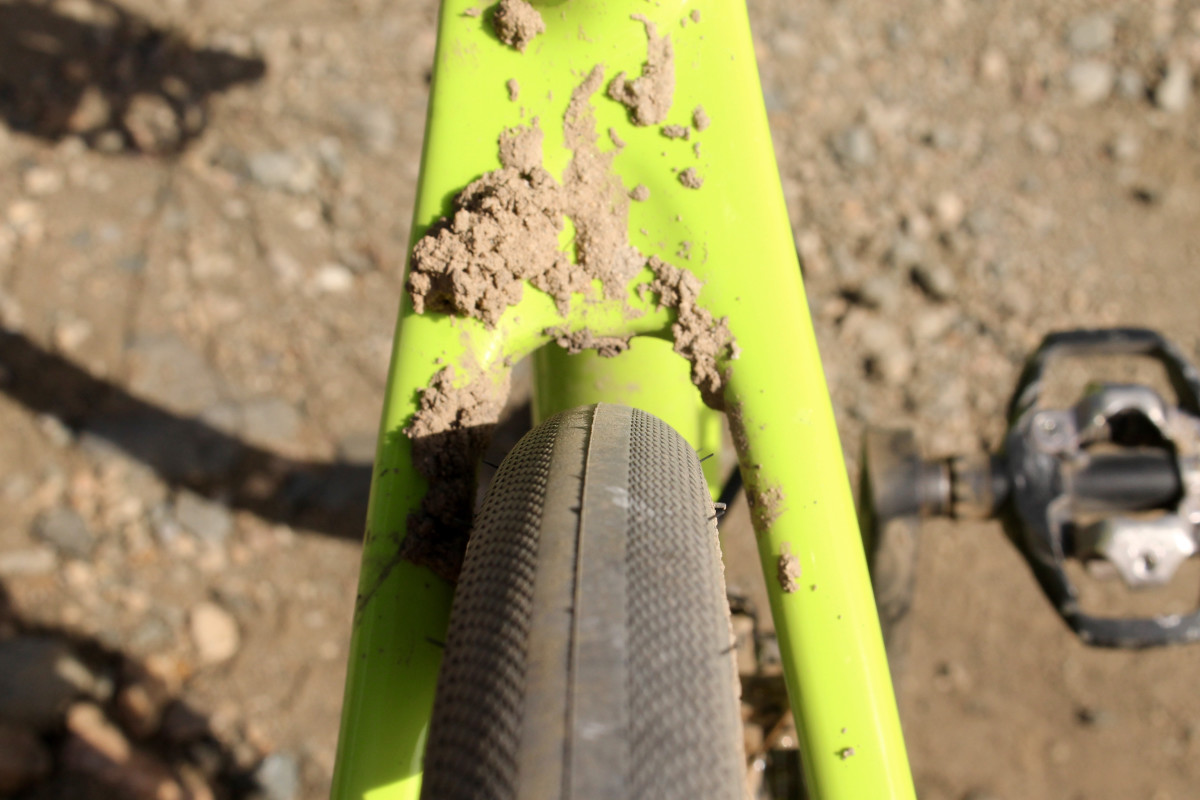 As for the bike components, I have absolutely no complaints. The drivetrain performed superbly, the brakes were bomber, the bars were comfortable, the wheels just trucked along—thumbs up all around. I am personally a fan of Shimano’s road shifters VS the SRAM double tap system, so the fact that the Diverge comes stock with Shimano components was a plus for me. 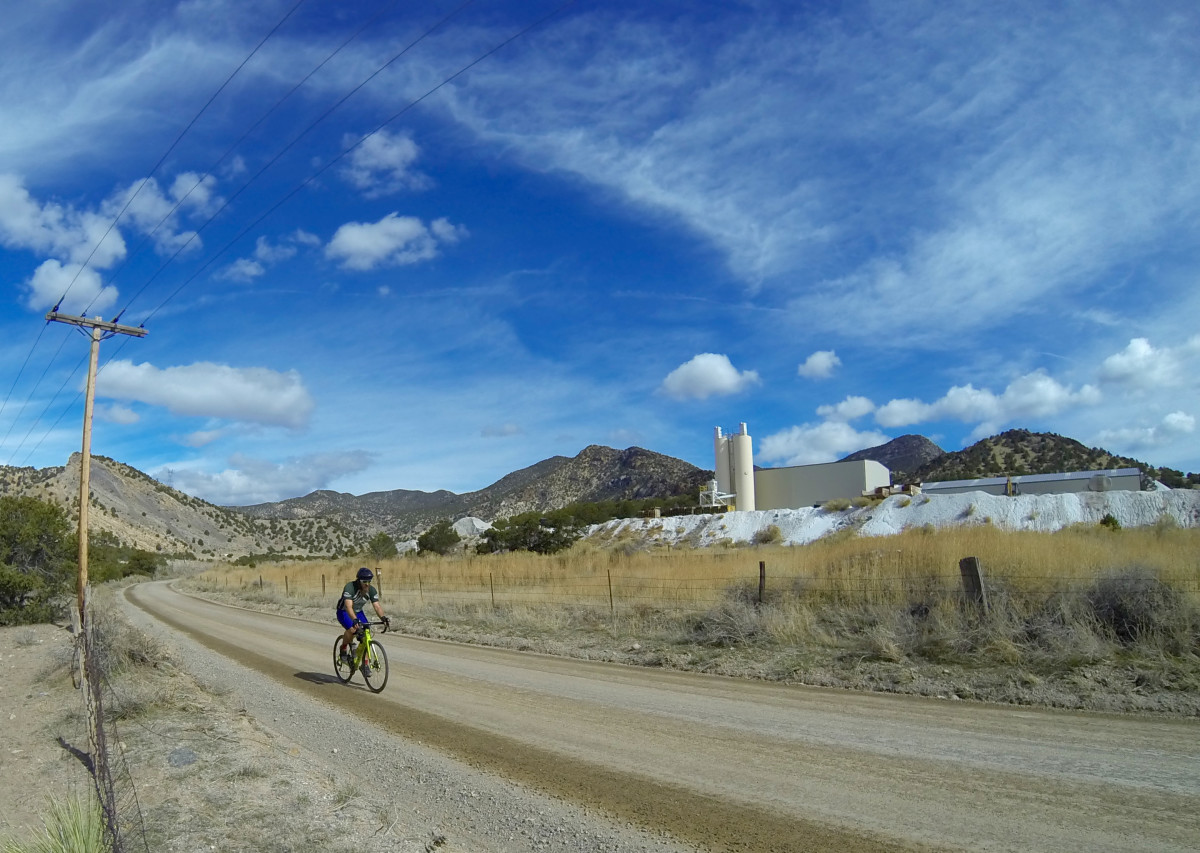 So at the end of the day, where does the Diverge fit in the life of a mountain biker? Well, in no way am I saying that you should ever give up your mountain bike—the Diverge isn’t that adventure worthy. However, I can say that I will never buy a standard road bike ever again. If I buy another drop bar bike, it will be an adventure bike like the Diverge. This capable rig can tackle any dirt road surface that you throw at it, and it’s also not a slacker on pavement. Even with a bum knee and minimal fitness, I was able to pull down an 18mph average into a headwind on pavement.

If you’re a mountain biker looking at a road bike, do yourself a favor and buy a roadie that you can ride on ALL the roads… not just the paved ones.

I’m really glad to see you’re back in the saddle! And this review is perfect. I just recently bought a new rig (plus size hardtail, that I love), but for my next bike I want to go this route. I was wondering what the difference is between cyclocross and adventure bikes is though. You really made it clear! I feel like adventure seems like the perfect bike to gravel grind, go for some rail trail rides, maybe dabble a bit in ‘cross, or be able to ride on the road. Thanks for the review and confirming my assumptions!

Hi Dan, thanks for the kind words!! Glad to be back on the bike!

Also, glad you found the review helpful–a bike of this nature is truly quite versatile. Good luck on your next bike purchase!

New bike won’t be in the budget for a little while, but I’ll be thinking back to this when I am ready to buy!