If you caught my previous plus-size article, you know that I think plus-size tires are the future of mountain bikes. You also read about my impressions of the Scott Genius LT Plus Vs. the standard Genius LT. But Scott is releasing several other plus-size bikes, including a couple different versions of the Scale hardtail and a myriad of Geniuses in different build levels.

Having just finished a review of the current model year’s Genius 930 29er, I was eager to test out the more comparable version of the shorter-travel Genius Plus. 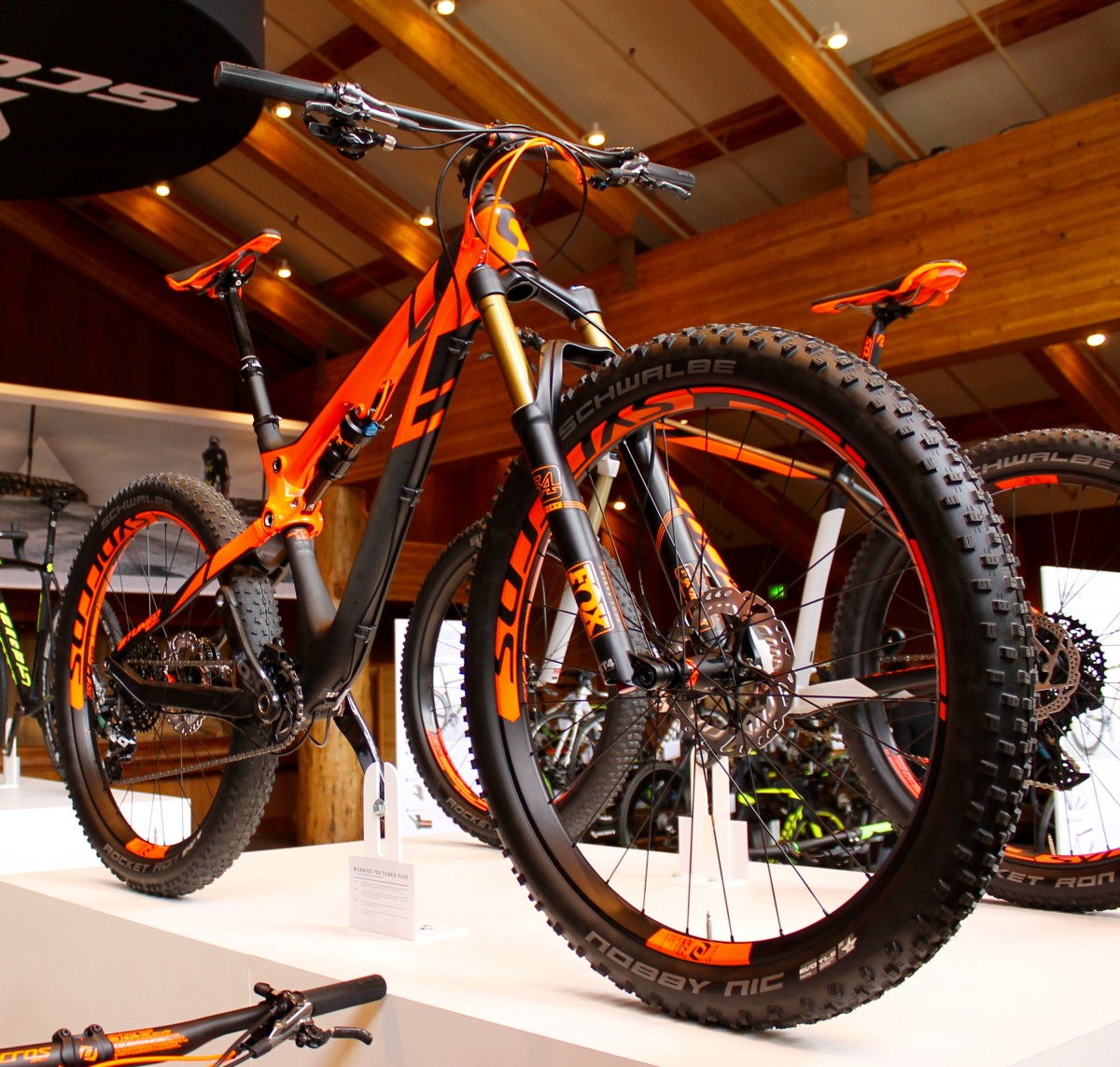 The Genius Plus’s geometry has been redesigned to perfectly accommodate the new plus-size tire measurements and standards. The rear end is the key feature, and while even in the top-tier models it’s currently an alloy rear triangle mated to a carbon front triangle, the clearances have all been adjusted, allowing for plenty of space for even a 3″ tire in the rear chainstays. The rear chainstays measure 445mm long, which are even shorter than the stays on the Genius 900–no small feat. Of course, the rear hub spacing utilizes the new Boost 148 standard, which allows for plenty of tire clearance while still maintaining the same Q factor as previous Genius models. Thanks to all of this clearance, the Genius Plus can run standard 29er wheels if you so desire.

The headtube angle on the Genius Plus is a slack-and-stable 67.5 degrees, and the bottom bracket is a tad lower on the plus model than on the previous 29er model.

The Genius Plus sports 140mm of front suspension and 130mm of rear, courtesy of the new Fox 34 FIT4 Factory fork and the new Fox Nude shock. I really appreciate the increase to 34mm stanchions up front, and the new Nude shock sports a larger air canister, which promises more plushness.

Of course, you can still easily control the shock and fork simultaneously with Scott’s 3-position TwinLoc lever. New for 2016, Scott has redesigned the lever to sit below the bar, to make use of the space often vacated by the front shifter when a 1x drivetrain is installed. This new lever is much easier to reach and provides a much more natural feel. Also, the lever integrates with Scott grips, functioning as one of the grip clamps to cut down on bar clutter. Of course, if you purchase a model of the Genius with a 2x drivetrain, the previous top-of-bar remote is used.

The Tuned model comes stock with a SRAM Boost X01 1×11 drivetrain with a chainguide in place of the front derailleur. Brakes are Shimano XTR with 180mm rotors, and the seatpost is a RockShox Reverb Stealth 125.

The wheels are Scott’s in-house Syncros brand, sporting carbon 40mm tubeless ready rims. Tires, as discussed in my previous article, are Schwalbe, with the 2.8” Nobby Nic EVO up front and a 2.8” Rocket Ron EVO in the rear.

While I tested both of the Genius LTs in the bike park, I had the opportunity to put the standard Genius Plus to the test in its native habitat: a big-mountain ride with flowy trails, gorgeous views, and high-speed descents on the revered Wasatch Crest.

The 140mm Genius proved to be the perfect tool for this job. With some substantial climbs despite the shuttle, fast turns, and plenty of descending (that wasn’t too technical for the most part), this bike was perfectly suited to the terrain. The plus-sized tires provided gobs of traction, rolled along quickly (read more about plus-sized wheels, here), ripped through the corners, and provided serious confidence–even when descending at warp speed on new-to-me trails.

The 2016 Genius is significantly improved from the current-year model 930 that I just finished testing. In my review a couple weeks ago, I noted that I’d have preferred 34mm stanchions up front, possibly 10mm more front travel, along with a dropper post and meatier tires. The Genius Plus offers all of those items in an aggressive package that handles well on all terrain. With all of my questions answered before I could even pose them, what more could I ask for?!

I’ve written extensively about chainstays on various plus-sized bikes and fat bikes, and I’ve had both positive and negative comments to impart at various turns. Specifically, my short stature and muscular build has given me very wide calf muscles, which tend to bang into the chainstays on many plus-size and fat bikes. I personally won’t abide with unnecessary pain when I’m riding my mountain bike, especially when it can be completely avoided.

You know how I know it can be avoided? Because Scott has produced several plus-size rigs that don’t exhibit any such problems. I had no calf or heel bang on the chainstays of the Genius Plus or the Genius LT Plus. Despite maintaining the same Q factor as a standard mountain bike and adding enough clearance for 3″ plus-sized tires as well as 130mm and 160mm of rear suspension respectively, Scott has managed to engineer a pain-free rear end on their new bikes.

As I was chatting with some of the other journalists at Scott Week, a couple of guys mentioned that they thought the rear ends were too long on these bikes. Well, I personally didn’t have any concerns about the length of the rear ends to begin with (I appreciate a fast, stable bike), but it seems to me that maybe we’re reaching a point where we can’t have absolutely every single feature that we desire in every single mountain bike. (Note: despite the complaints that some people voiced, as mentioned above the chainstays on the Genius Plus are actually shorter than those on the standard Genius 29er.)

For riders such as myself, it appears that we’re reaching the limits of what we can anatomically fit into a mountain bike without suffering serious drawbacks. Some companies are trying to produce bikes with uber-short rear ends, super-fat tires, and a Q factor no wider than a standard mountain bike. The fact is, you just can’t have all of those items in the same bike, so one (or more) will have to give. We’ve pushed and pushed the limits of what’s physically possible, and now it seems that we’re reaching the point where engineers must decide which elements are most important, and what needs to be sacrificed. It’s no longer a question of bigger-is-better–it’s now becoming a question of striking the best compromise between various factors.

While “compromise” might sound like a negative word, it doesn’t have to be. Know why? Because Scott, in their new plus-sized Geniuses, has struck the best possible compromise between all of these factors that I’ve seen to date. A standard Q factor mated to confidence-inspiring 3″ treads and a perfectly-spaced rear end have all come together to create a balanced mountain bike that rides like way more than a 140mm trail bike.

With a component spec that you can’t argue with and performance that belies the word “compromise,” I could see the Genius Plus being the perfect one-quiver mountain bike for riders all around the globe.

Thanks for the nice review. My rig is a 2014 Genius 930 which I really enjoy. I really like the redesigned twin-loc lever on these new bikes. Do you think that lever would be compatible with the suspension on the 2014/2015 bikes? And about the integration with the Scott grip…is that required? Could the lever be used without the grip so we can use a grip of our choice? I use extra chunkys… I will have to settle with running Ardent 2.4s up front and High Roller 2.35s in the back on my setup, maybe 29r to 27.5+ kits will be available in the future.

Hey man, great questions! I’m really not 100% sure about backwards compatibility to previous bikes. I think that would be a question of how much the Fox suspension has changed, and if the amount of cable pull is identical across all of those model years of suspension. Unfortunately, there was no mention from Scott during the presentation or any of their marketing materials about backwards compatibility. It’s possible, so I’d say check with a Scott dealer about availability and compatibility.

As for stand-alone mounting, Scott bikes with the new lever ship with a spacer to allow the lever to mount on the bar by itself if you want to use a different brand of grips. The spacer goes between the metal clamp and the bar to take up the space that the grip would have occupied.

As for doing a 27.5+ conversion, there are several companies out there marketing conversion-oriented tires+wheels. If you haven’t yet, I definitely recommend that you read a few of Jeff’s articles on his 27.5+ conversion experience. Spoiler alert: he hasn’t put his 29er wheels back on yet:
http://www.singletracks.com/blog/mtb-gear/how-to-convert-your-29er-to-a-27-5-all-trail-bike/
http://www.singletracks.com/blog/mtb-gear/27-5-tires-these-are-for-your-29er/

When I reviewed the Chumba Ursa 29+, I was sold on the plus size tire concept.

It seems to be having good results even when unintended. Rocky Mountain came out with the Sherpa as a fully for bikepacking and decided 27.5+ would provide the best platform for this application. When I demoed one, not backpacking but just throwing it around a variety of trails, it turned out to be a great ride. It was stable, confidence inspiring, and still tons o’ fun.

I thought this article represented more how I might feel about a 27.5 bike and some of its benefits and drawbacks.

I am not sure anyone will read this in time, but here goes. I currently have a 2016 Scott Genius 720 Plus, but I am wondering what would be the difference between that and the LT version of the same bike. Is the 20mm gain in suspension travel that big of a deal? I am currently ride technical trails with roots and rocks here in New England. What would that 20mm of travel get me in the future? Do I need it?

I don’t think anyone ever “needs” more travel or more burl. It’s more of a “want” situation.

So is the LT different than the standard bike? The answer is “yes.” In addition to 20mm of more travel, it’s slacker, and the component spec is burlier–it’s a bigger bike for bigger riding.

But do you NEED it, especially when you already have a very similar bike? The answer is “no.” Do you WANT it? Only you can answer that question.

Greg,
Thank you so much for the reply. You are correct, I don’t need it since I have the already very capable bike in the Genius 720 Plus. It is a great bike, and I love it. I just happened to see a 2016 Genius 720 LT Plus, and it got me thinking. Pretty good deal too. I can only ride one bike at a time so it really makes no sense to add another bike that is not that much different. Maybe down the road I can add it, or get a downhill bike like the Gambler. For the riding that I do here in MA, rail trails with friends, to my off road single tracks with roots and rocks my Genius 720 Plus is probably perfect.

Right on, that sounds like an accurate assessment, Don!

I am contemplating purchasing the LT model off of eBay if I were to gain something that I don’t have with my current Genius 720 Plus.