The Torrent 7 is Norco’s rookie card in the increasingly-popular plus size crop of mountain bikes, and after hashing it out for a couple months aboard this aggressive, mid-fat beast of a hardtail, it was clear nothing in its design was rushed simply for the sake of meeting yet another impending new standard of wheel size. After seeing the sub-$2,500 price tag on the highest spec’d Torrent (7.1) equipped with a burly alloy cockpit, a tried-and-true WTB Scraper wheelset, the highly-praised SRAM GX drivetrain, and a KS E-ten dropper, you may feel the rush to get your grubby little hands on one.

Check out my On Review for details on specifications, geometry, and components as well as some up-close photos of the Torrent 7.1.

Bottom Line: with aggressive trail geometry and stout componentry, the Torrent 7.1 all-mountain 27.5+ hardtail rewards those who get fast and stay fast, aren’t afraid to trade some weight for performance, and want to have the most fun they’ve ever had on a hardtail.

As more and more bike companies roll out their plus size competitors, much of what you read this year on the matter may tend to focus more on certain inherent qualities of the new wheel width and tires rather than the bike itself. So, before we dive into the final take on the Torrent 7.1, it’s worth mentioning some of the common threads woven throughout the current spread of 27.5+ bikes.

A 27.5+ is essentially a wider 29er, yet the way the mid-fat size actually feels tackling the trail is much more complex than this simple comparison lets on. If you ride a 29er, a 27.5+ feels familiar in terms of height, as an inflated 3.0×27.5″ tire measures about the same as a 2.25″ 29er. To start, this means you can run standard (that’s such a slippery word these days) 29er wheels on your 27.5+ bike. The width, however, is where the performance of a 27.5+ takes an interesting turn.

On a 27.5+-specific bike, Boost spacing necessarily expands the rear hub distance to 148mm, and a plus-specific fork now accommodates a 110mm hub. While Boost accommodates the new width, it also widens the spoke bracing angle to increase wheel stiffness. This is good, especially when more weight, width, and height have been added.

Lastly, a taller and wider 27.5 means a higher volume tire with the ability to run pressures flirting with the teens. Fat bikers know this translates into a larger contact patch and compressibility that provides both traction and comfort–two characteristics that are more than welcome on a hardtail like the Torrent.

These gains in performance, however, are not without some accompanying compromise. A taller, wider, and consequently heavier wheel is slower to accelerate and quicker to decelerate. While more initial effort is required to get the plus size moving, once up to speed, the rider who lays off the brakes while laying into the bike will be rewarded most. In other words, get fast and stay fast.

My maiden voyage aboard the Torrent resulted in mixed feelings about where this bike would shine, as I navigated a 25-mile backcountry loop. The heavier (than non-plus) tires coupled with the SRAM 1x GX drivetrain was definitely noticeable during the first third of my ride consisting of a long, slow gravel grind, which gave way to more climbing up slower, less-than-maintained singletrack. That said, the combination of massive Nobby Nic 3.0″ tire tread and the hardtail frame explained why, despite added rotational weight, the Torrent is an extremely capable and confident climber even on steep, technical grades. In fact, I was able to clear two loose rock and root switchback sections for the first time on the Torrent when, otherwise unable to on other bikes.

Flat and undulating sections are where the disadvantages of the wider, heavier wheel are most noticeable where carrying momentum punctuated by bursts of pedal strokes are key to keep from slowing. This accelerated rate of slowing is not a drawback of the Torrent, per se, rather an opportunity to adapt to a different style of riding, and was reminiscent of my days learning to ride a singlespeed 29er–not bad, just different. I also suspect the ambitious tread of the Nobby Nic tires had a lot to do with a slower feel.

With tire pressures barely reaching double digits, coupled with the increased area of contact under the gutsy Rockshox Yari, I found better control through corners, higher speeds and stability through chunky tech, an unabashed recklessness through rock gardens, and a heightened sense of confidence on the Torrent when a less-than-optimal line was forced upon me. Perhaps most surprising was how nimble the Torrent felt whether on or above the trail. It definitely rides much lighter than it looks, and I just couldn’t resist popping the Torrent off every lip, drop, and jump I could find.

Descending wide-open, fast, technical terrain (think “enduro”) on the Torrent is where I could begin to delineate the differences between this type of bike and others. Will it do everything an all-mountain full suspension bike will? In the hands of the right pilot, of course; and in the hands of a less capable rider (like myself), to an extent. The Torrent is still a hardtail bike, and there were drops and features of a certain height and nature I’d have felt more confident riding with a full squish. On the flip side, I never would have imagined descending as fast and aggressively as I did down the Cold Creek trail on a hardtail.

There is one major down side to the Torrent, and I would caution anyone to think long and hard about this one before trying a plus size bike: it’s very hard to look at your puny 2.4″ tires and feel the same way about them once you get a taste of the mid-fats. But hey, I guess people still ride 26″ bikes, too. The point is, plus-size bikes are no gimmick and while standard, non-plus will be around for a good bit longer (forever? Maybe.), the mid-fats are here to stay.

The overall setup of the stock Torrent 7.1 felt super solid. The frame is burly and unyielding and the geometry was spot-on for all-around ripping. The WTB Scrapers are laterally stiff, durable, and a great match for the aggressively-treaded Nobby Nic 3.0″ tires, which I might add are quite confidence-inspiring themselves. SRAM’s Avid DB5 brakes and GX 1x drivetrain were by far the biggest component surprise on the Torrent 7.1, and you can rest assured that even at the lower end of the component spectrum you will find quality and durability in these two systems. Although it may not be as snappy as higher end posts, the Kind Shock E-Ten 100mm performed admirably, but as aggressive as the Torrent begs to be ridden, I’d love to see at least 125mm of drop. As for the cranks… well, the Turbine is no exception to Race Face’s continued ability to churn out affordable, reliable products.

While not exactly a component, the threaded cable mount hardware running the down tube is a little chintzy and requires surgical steadiness to prevent stripping, as I did on one while mounting the dropper housing. Oopsy!

With stout 35mm stanchions, a 15mm thru-axle, and a generous 130mm of travel, the new Yari fork from RockShox was more than capable of reigning in terrain I’ve previously reserved for longer travel, full suspension rigs. The Yari is very Pike-ish in its plushness, but required a few tokens for better bottom-out and height support in the open setting. I mentioned in the On Review I would swap out the stock stem and bar ASAP, but that would sheerly be for bling purposes as the stock Norco brand performed flawlessly and also keeps the pocket book smiling.

The Torrent 7 borrows the traction and plow-ability of a fat bike, the rollover of a 29er, yet maintains the nimble handling of a 27.5″ non-plus bike while adding stiffness and stability to the the equation via Boost spacing, all wrapped up in spot-on, all-mountain geometry. In concert, the ride feels much more than the sum of its parts or theoretical comparisons. The Torrent tamed, softened, and essentially dumbed down any and every trail variation, while raising the bar in terms of what an all-mountain hardtail is capable of. 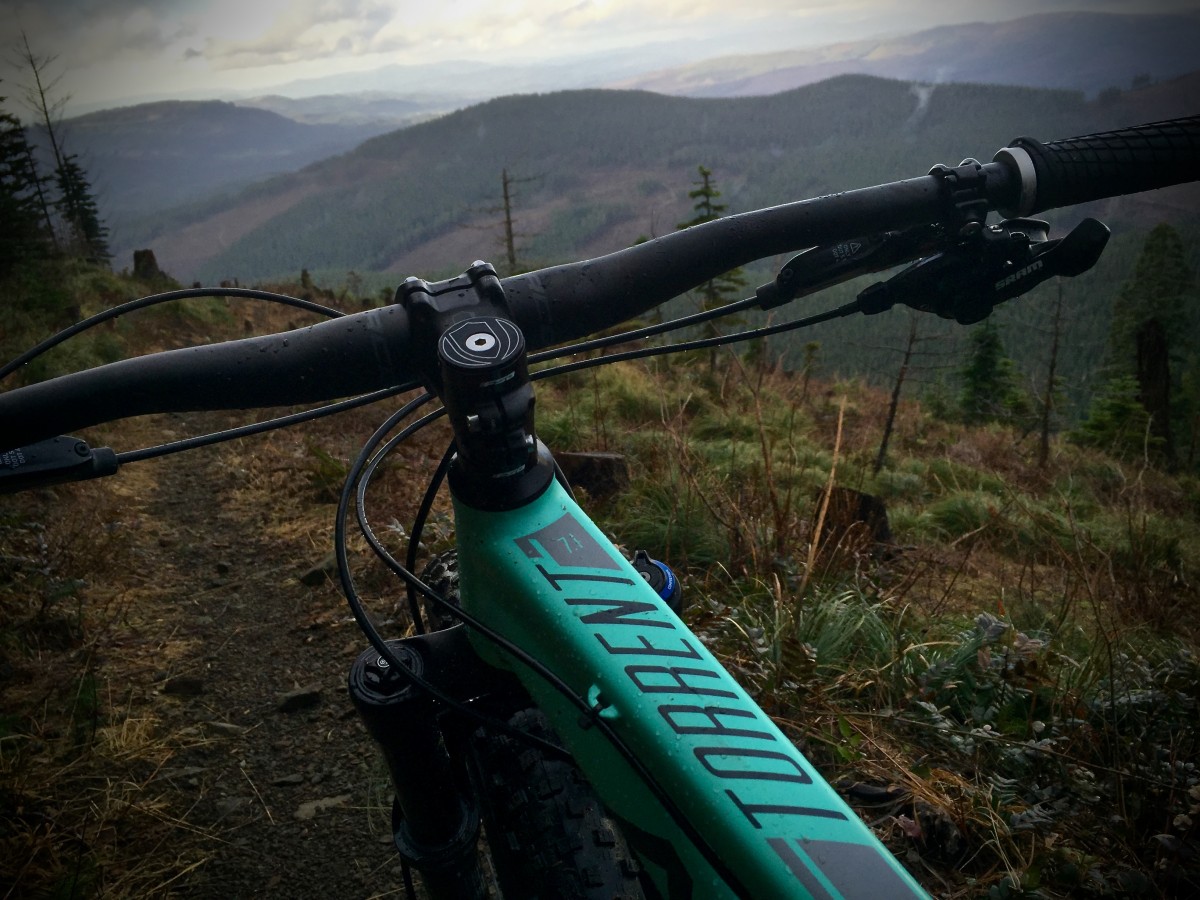 sweet bike, they have a FS model now.. maybe that will have they best of both worlds??

Can you run a 29er wheelset on this bike and fork setup? What is the widest 29er tire possible with this fork?

As long as you have a 110mm front hub and 148mm rear hub (Boost), you can run a 29er. I am currently running a set of Bontrager 29er wheels on the 2017 Norco Torrent 7.1 which has the same clearance as this, the 2016 model. I have a set of Bontrager tires 2.4″ and they fit with room to spare. I’m 99% positive you could go 29×2.5 with no problem. Note, it’s not usually the fork that’s the issue with tire clearance, but the drive side chain stay. To provide clearance, Norco had to thin the portion of the chain stay nearest the chainring and use an asymmetric design (most Boost rear triangles are like this). This also obviates 2x compatibility. Still, I’m sure you can run 2.5″ wide 29er tires on this bike.

Have you encountered any noticeable differences in the geometry when you are riding after going from the 27.5+ wheelsize to the 29ers? Thanks!