The 2020 Reign sees giant changes over last year’s model, giving the bike a flashier look and feel, moving exclusively to 29er wheels, and providing more aggressive geometry. I spent the better part of a day testing the new Giant Reign Advanced Pro 29 0 on a mix of natural and flow trails, and here’s what I learned. 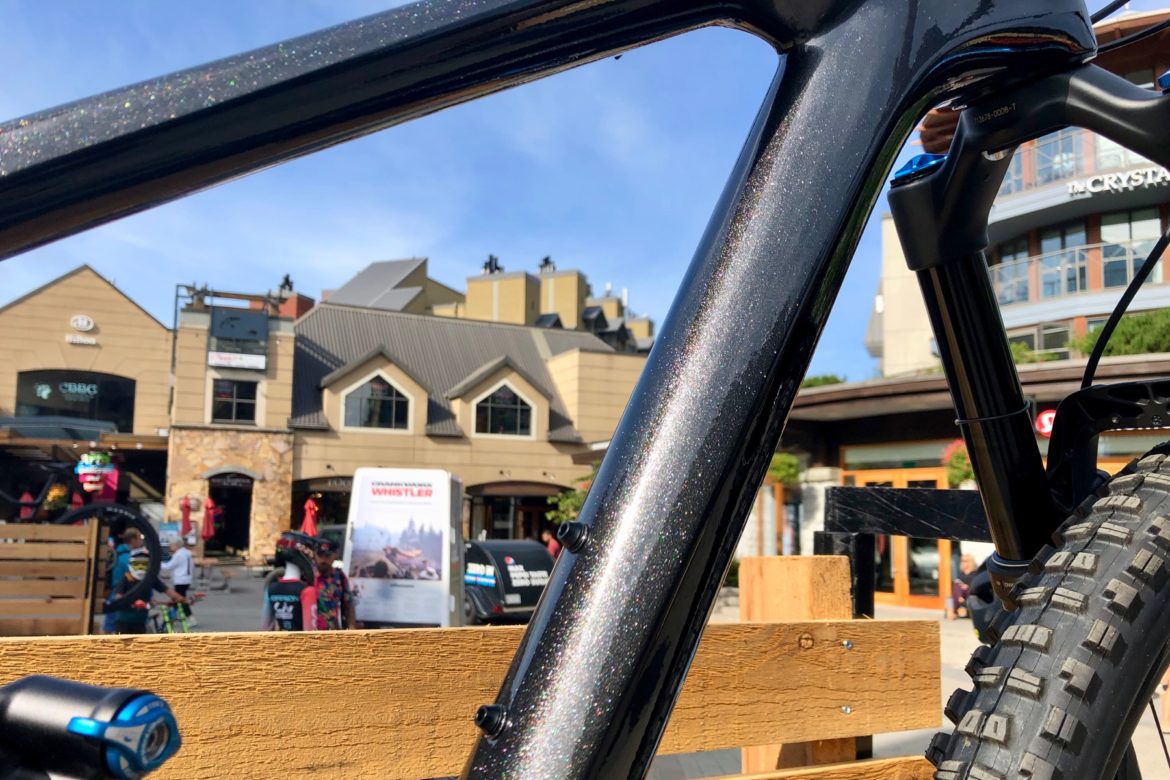 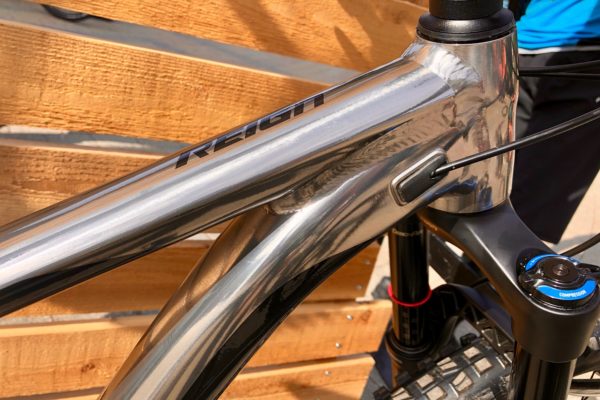 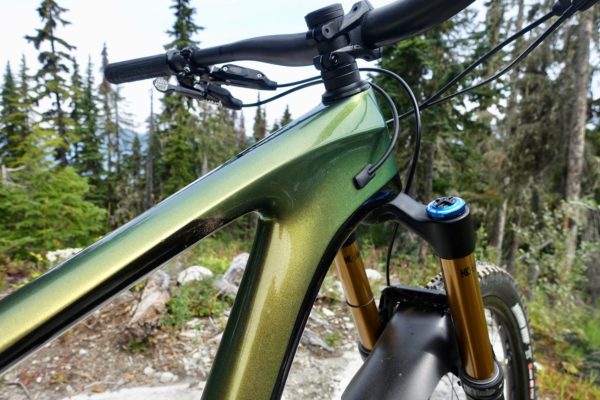 Perhaps the most obvious change with any new bike generation is the finish on the frame, and Giant appears to have outdone themselves this time. Everyone at Whistler seemed eager to comment on the new look, and most if not all were stoked on the presentation. The sparkly green paint job on the zero model I tested is known as Chameleon Saturn. The flashy finishes aren’t just limited to the top-end models. The aluminum model gets a chrome-looking finish while another model gets a sparkly black outer space look. 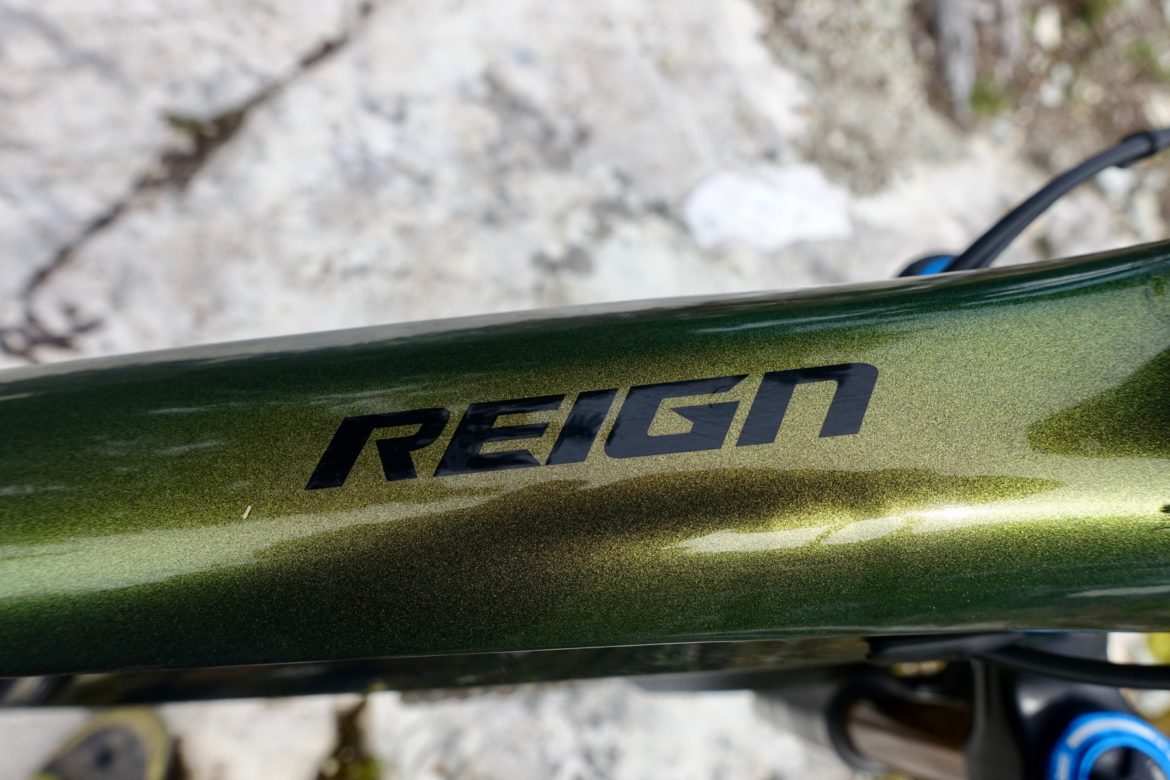 Even the tubing shape is more defined, particularly around the junction between the top, down, and head tubes. To me the lines evoke sort of the bird-like shape of the Giant logo, making the bike recognizable at a distance even without the fancy paint job. 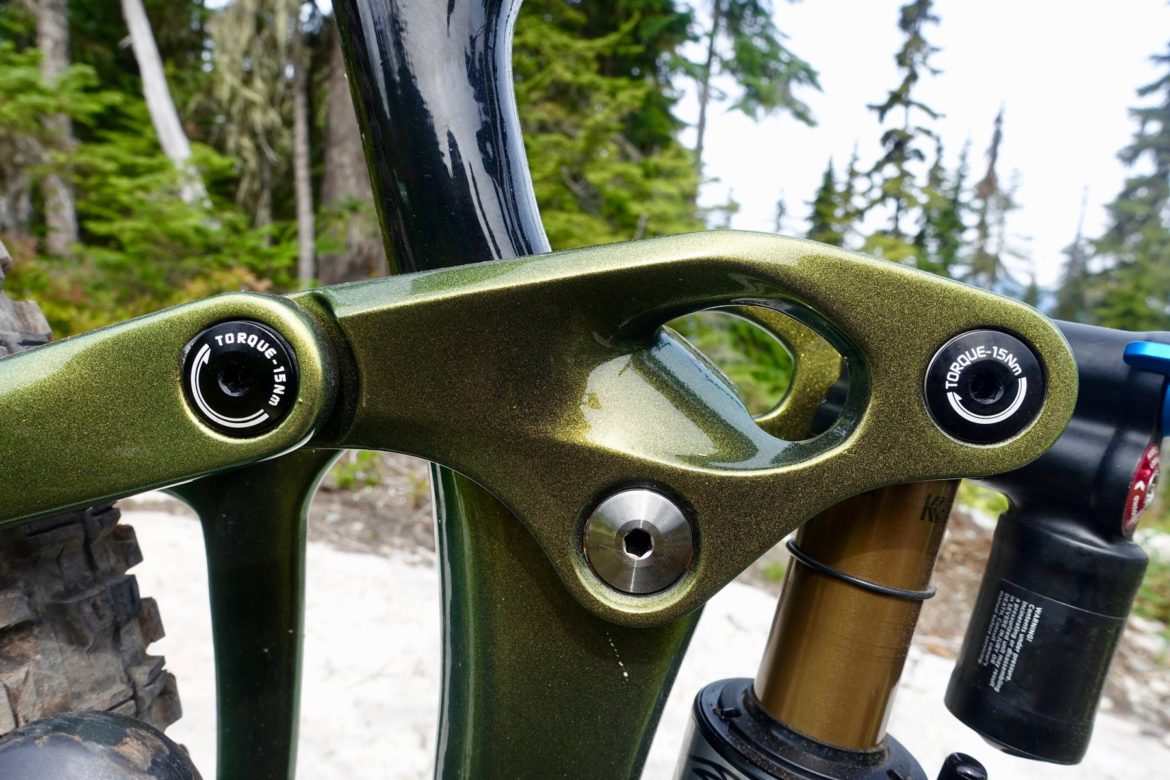 Both the front and rear triangle on the Advanced Pro models are made from carbon fiber, as is the upper linkage. This is a change from the previous generation, and Giant is actually using the same carbon linkage on all Reign models, including the aluminum one. Building the linkage from carbon allows more design flexibility, better performance, and some potential weight savings, plus using it on all models helps amortize the cost of the pricey molds. 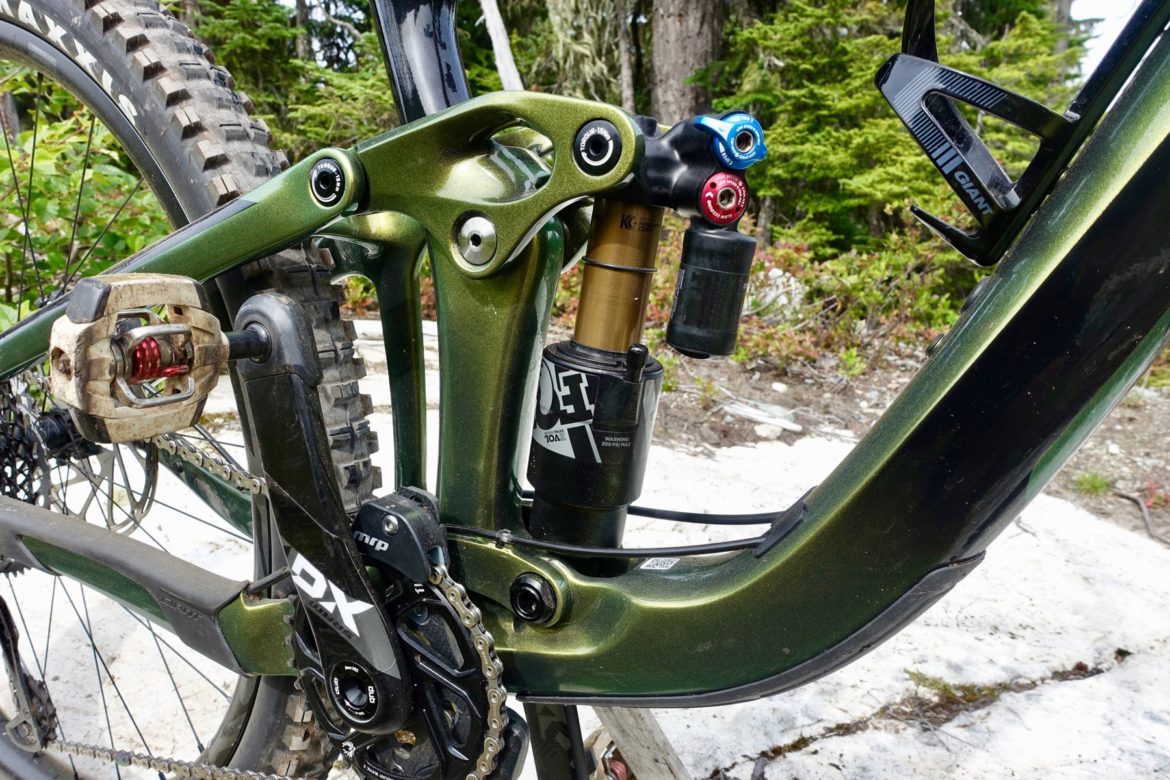 Like the previous Reign, the 2020 version features the Maestro suspension design in conjunction with a Trunnion mount. Maestro is designed to prevent braking forces from affecting suspension and the mounting position places weight low and centered on the bike for improved handling.

The bike has a 65-degree head tube angle and a 76.8-degree seat tube angle. I tested a size large bike.

Giant offers three builds in the Reign Advanced Pro line, and the “zero” model I tested sits the top of the line, priced at $9,000. For the same price, you could buy the Advanced Pro 1 model ($5,000) for yourself, and the Advanced Pro 2 model ($4,000) for your friend. All three choices feature a full carbon frame and the same geometry, just with a different component mix. Giant also offers a plain Reign build with an aluminum frame priced at $3,000, and two SX models with a spec geared toward more aggressive descending. 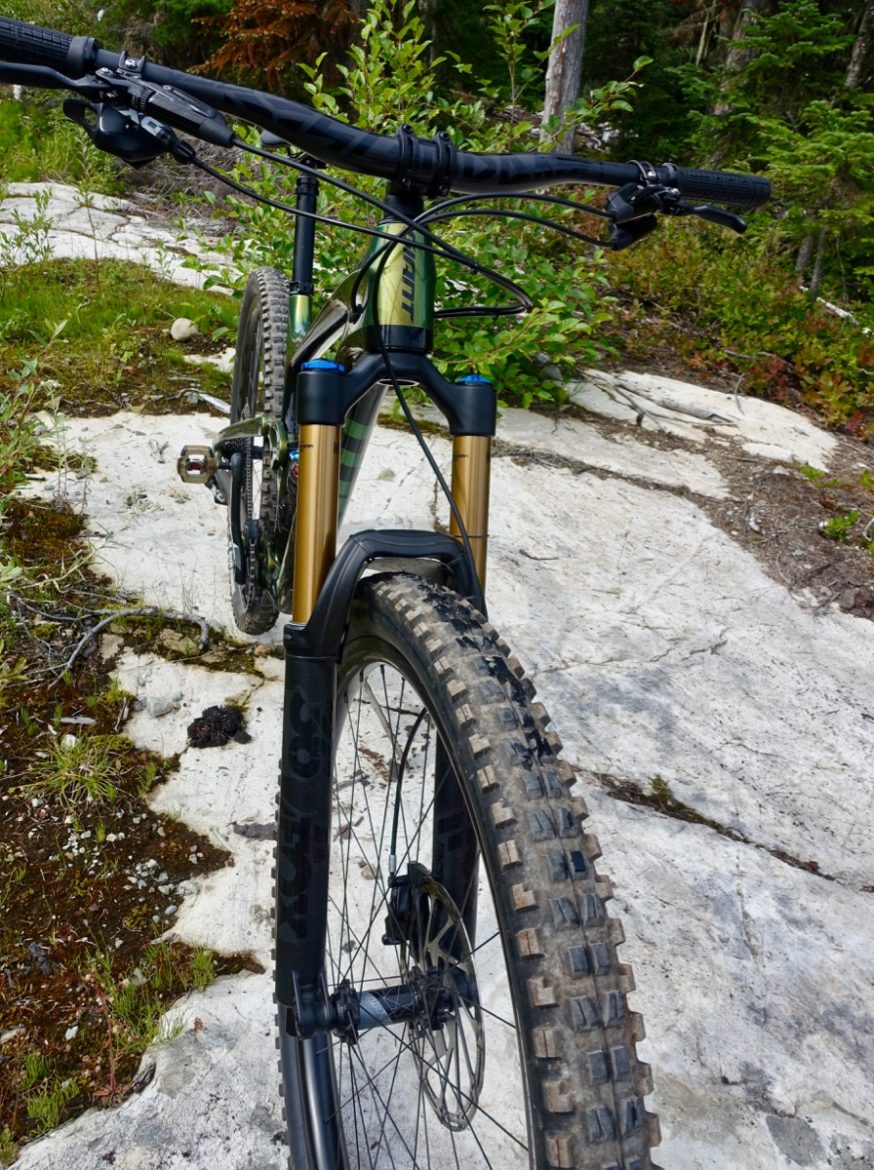 I could go on and on about how awesome the top-level Fox suspension bits perform, but you already know that. I could also write about how the carbon wheels and handlebars contribute to the ride feel, but my guess is you know that too. 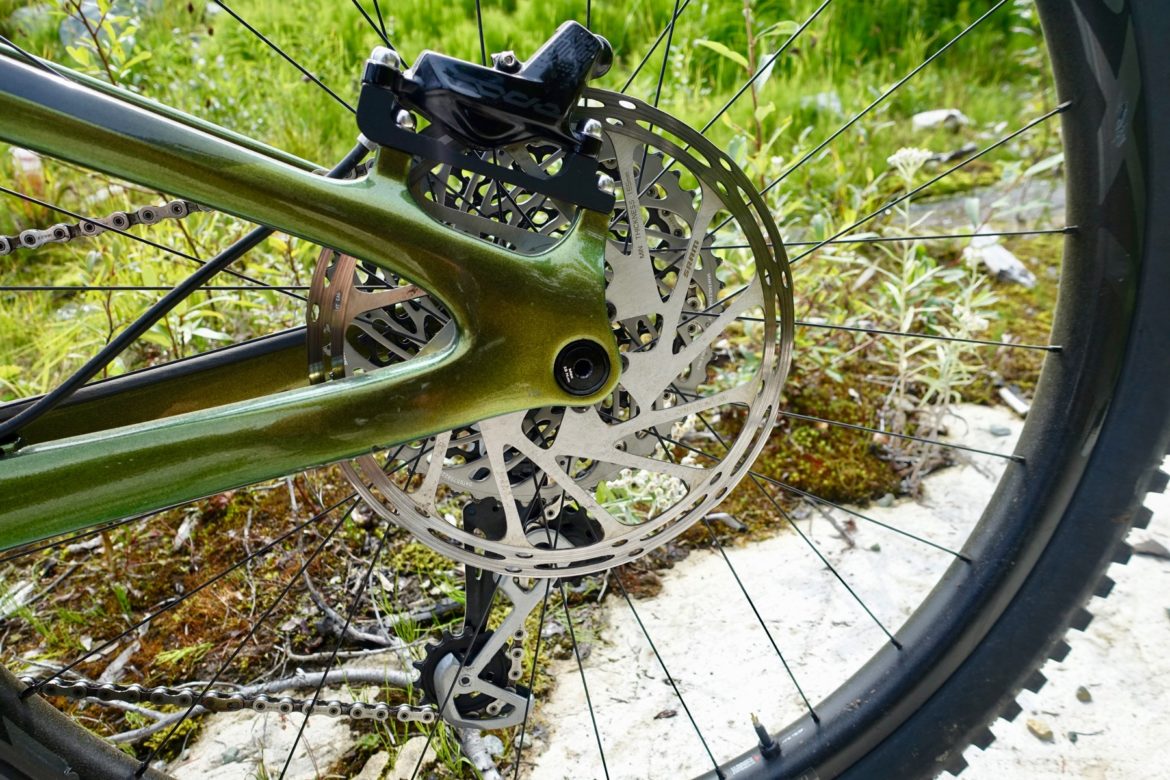 Instead, I want to point out two smart specs Giant has chosen to include that are available at all three Advanced Pro price points. Each build features 200mm+ disc brake rotors front and rear, for improved stopping power regardless of which set of brakes the bike is running. (In fact, even the aluminum model has big rotors front and rear.)

All three builds also include Maxxis Minion tires, with a 2.5-inch DHF up front and a 2.4-inch DHR II in the rear. This is a favorite tread pattern for many riders, and while the two more expensive carbon models upgrade to the 3C construction and EXO+ casing over the EXO casing on the least expensive carbon model, much of the handling performance remains the same.

Like most great rides, mine started with a climb. I pedaled up the steep fire road leading from the base of Whistler Blackcomb and was immediately impressed with the firm climbing platform offered by the Maestro Suspension design. Looking over the specs, I was concerned the 65-degree head tube angle would leave the front end feeling light and wandery on the steeps, but the near-vertical 76.8-degree seat tube angle worked to shift my balance forward.

Looking at the sizing chart, I actually fudged a bit when I said a large would work for my height. There’s an overlap between the large and extra large sizes for riders who are 6’2″ (I’m six foot two and three quarters), but based on my test ride, I would recommend sizing up for those who are on the line because the size large was too small for me. The cockpit felt cramped, and the steep seat tube didn’t do me any favors by pushing the seat even closer to the bars. Overall the reach on the Giant Reign is quite progressive, though the steepness of the seat tube angle appears to be an outlier among current generation 29er enduro bikes.

Still, I had no problem setting a quick pace up the mountain, and the only riders who passed me were those riding electric mountain bikes. As expected, the zero build is lightweight making it dialed for both climbing and descending.

My first descent on the Reign Advanced Pro was on the Dark Crystal trail, a steep, natural, and technical shard of singletrack that plunges over rock rolls and loamy root webs. Here the Maestro suspension platform really came alive, soaking up trail chatter without feeling overly soft and mushy through the turns. The overall frame stiffness plays a big role too, keeping the bike responsive in sticky situations. 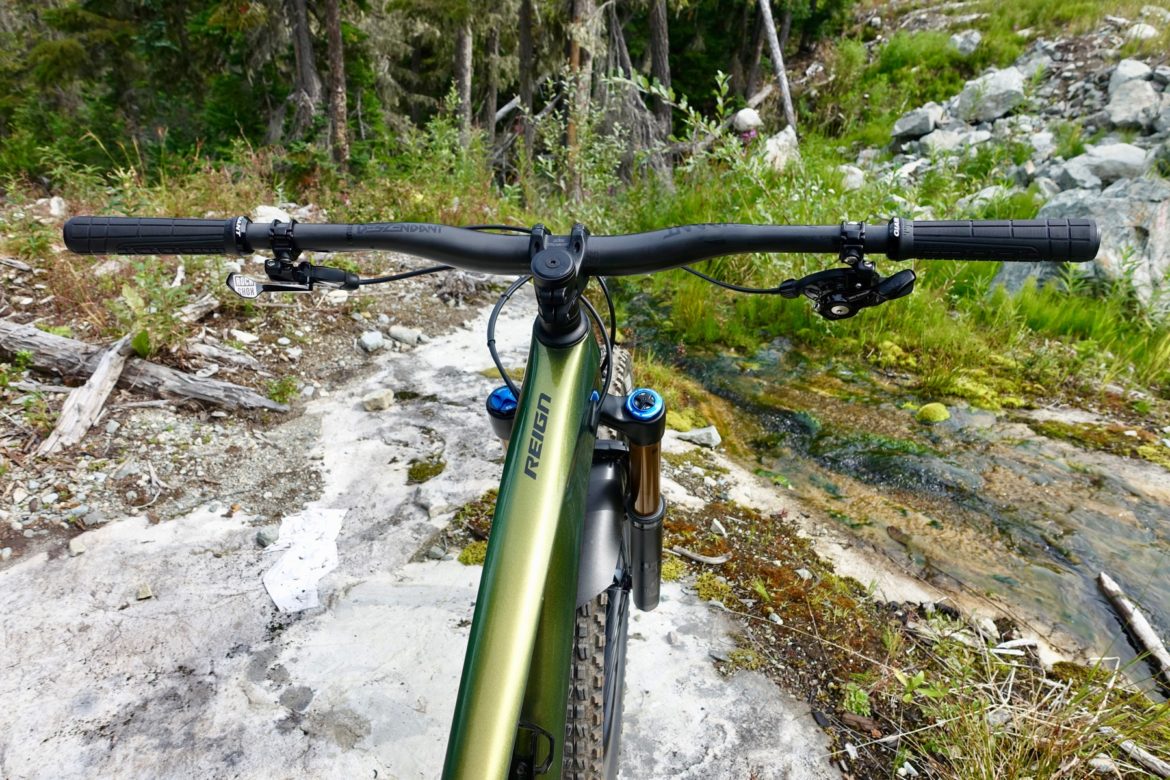 Coasting downhill the Giant-branded hubs were nearly silent, though the same can’t be said for the chainslap rattling the rear end. I’ve noticed other brands copying the ribbed chainstay protector Specialized rolled out with the new Enduro, and it seems like the new Reign could benefit from a similar device. If anything, it’s an easy aftermarket fix.

Switching over to the flowy trails in the bike park, the Reign Advanced Pro felt poppy and spry. The long wheelbase and big 29er wheels provide plenty of stability for descending full gas, and I had no problem getting the bike in the air over tabletops. Again, the overall lateral stiffness — thanks, perhaps to the improved linkage — lends itself to consistent, responsive cornering through big berms as well as sharp, technical turns.

So is the Giant Reign Advanced Pro 29 for riding technical trails or wide-open flow trails? Based on my test rides, I’d say the bike handles both with ease. Giant has done a nice job minimizing any performance hits to the bike’s climbing abilities while boosting its overall descending prowess, making this a fast, fun choice for almost any type of ride.

Videos
Enduro Racing from a Photographer's Eyes [video]
Gear
4 Mountain Bike Saddles, Reviewed for 2020 [Review]
Gear
What is 'Too Heavy' for a Mountain Bike?
Singletracks
Get Ready for a Bikepacking Adventure with these Gear Picks