At 21 years of age, Kiwi pro downhill racer Kate Weatherly has made a name for herself on the World Cup circuit. Having won New Zeland’s 2018 DH National Championship, and earning her first World Cup top ten in Andorra, she is leaning into 2019 with an eye toward the top steps of the podium.

Kate recently took a break from her regimen of gym work, riding, more gym work, bike shop work, and rest to chat with us about where her gravity career began, and where she hopes to take things next.

Kate grew up in the diverse New Zealand metropolis of Auckland, on the northern end of the country’s North Island. In 2012, at 15 years of age, a friend convinced her to give mountain biking a go, and a short time later she decided to check out the local gravity race scene. Kate recalls her introduction to mountain biking in a familiar tone that may resonate with other young racers. “I sucked pretty bad especially riding a cheap hardtail but I had a great time. After around a year of riding a hardtail, I saved up enough to get a downhill bike and started racing at the end of 2013.”

Her leap into racing was decidedly passion-driven and included all of the expected challenges. “I was pretty terrible. My first race, which now takes me around 3 minutes to ride, took me I think 8 minutes to walk/ride down. I loved it and I’ve never got on with a sport this well. I’ve raced pretty much every local race since and started racing the national races here in 2015. I was slow to learn and I didn’t start having much success until the last couple of years. I’ve always worked hard and I love putting my all into the sport and have enjoyed every second of racing.”

When she was younger Kate had a respiratory disease called bronchiectasis that prevented her from enjoying anything beyond moderate physical activity. As her body grew, and the tissue in her lungs began to heal, she gained an interest in being more active. Mountain biking was the first sport that fully grabbed her attention, and she has been pinned ever since.

Some readers may know the story of Kate’s gender transition journey, which she began at age 17. Today Kate’s thoughts on her identity related to her racing career are that “I am an athlete who happens to be trans. Not a trans athlete.” She mentioned wanting to be a role model for future athletes who may also be trans while maintaining a primary focus on racing at the highest level possible.

Kate started taking hormone blockers and estrogen three years prior to racing in a women’s event and she has met each of the IOC and UCI regulations for a transgender athlete to compete in elite level women’s events.

Kate’s primary sponsor, ADU Industries, is an importer for Devinci, Leatt, and other brands she uses. Apart from their support, Kate’s dad helps her with logistics at races, and she does all the rest on her own. From tuning and rebuilding her suspension to sorting out broken components during practice days, she is truly running her own show.

Maintaining focus on the steep chutes, roots, rocks, and drops of modern DH tracks, in addition to wrenching and coordinating travel, requires a mountain of focus. Kate recently completed a degree in product design at Auckland University of Tech and has since put all of her time and energy into improving her racing career. Most days she can be found in the gym working on overall strength, road riding to improve her endurance game, or on her trail bike focusing on dirt skills.

“I don’t currently have a skills coach but I ride with some other top-level kiwi riders [like Vinny Armstrong] and we learn from each other. For my strength training, I work with Jonny Thompson from Fit 4 Racing out of the UK. He trains the likes of Adam Brayton and has been amazing for getting me fit and strong this offseason. Although I’ve been in the gym for a few years this has been my first year with a coach and having the direction and specific racing focus has already made a huge difference.”

I asked Kate what she has changed about training and riding throughout her move from amateur to pro racing, and her response could be summarized in one word: everything.

“When I was riding more just for fun the biggest difference was the frequency of riding and training, and the style in which I rode. I used to take a packed lunch and go and push up trails and spend most of the day with friends at the local trails. Now I’ll go on my trail bike and ride for a couple of hours, go home to eat, then go do a road ride or hit the gym.

“Training for me is pretty much a full-time job. While riding as an amateur I would ride maybe once or twice a week. [..] Now I’m on the bike almost every day and in the gym regularly too.

“As with any high-level athlete I obviously want to control all aspects of my life and I take care to eat healthily. I don’t count calories, but I take care to eat lots of good food and get plenty of sleep. I also set aside plenty of time for stretching, massages, foam rolling, and yoga to help my body recover. One of the hardest things about upping my training volume was just getting my body to recover enough to uphold my training amount. Obviously, expectations are higher too, although I give myself at least one ‘fun’ ride per week. I used to spend a lot more time sessioning jumps whereas now I’m trying to push as fast as I can to get used to riding at race pace, which I love, but it’s quite different compared to when I started riding.”

Given the required time commitments and dedication to the strict training programs, I often wonder what motivates pro riders like Kate to wrap their lives around a cycling career.

“I think I always wanted to get better. I started training in the gym around 2016 to try and improve my racing and start winning, and last year I got to a point where I was starting to win races pretty consistently and my experience was starting to pay off. I realized [that] if I kept pushing I could reach the top of the sport.

“I’ve been blessed with a pretty much perfect body for downhill; not too tall with good natural strength, which helps. I do struggle with confidence sometimes but I just want to be the best rider I can be. I love the training and learning outside of riding downhill that pays off and I enjoy the process as much as the final result. It sounds a bit funny but I almost like being beaten as it gives me the fire to push harder and train harder.”

2018 season and a look toward the future

All riders have a soil type and track style where they feel at home, and Kate’s preferences fit well with modern World Cup tracks. “I definitely feel my strengths lie in loose riding conditions [like loam and sand] and when the tracks get rough and fast.”

With these strengths in mind, I asked Kate about races or tracks that really stuck out from the past season.

“Winning national champs here was a big highlight as that was when people finally started to notice me and I felt like I really could be a pro downhill rider. It was also an amazing run on the track and one of my fastest and cleanest of the year.

“My other biggest highlight was racing in Andorra. I had a pretty rough first day, blowing up a wheel on my second run and missing the whole day of practice. I then had to qualify on only around four runs of a track I’d never ridden before and I just managed to qualify. This pushed me hard and I rode harder than I ever have before on race day and managed to get my first World Cup top 10.

“Along with this, my first couple of splits [in Andorra] were podium contending which gave me the understanding that my strength was not where it needed to be to hold my speed to the bottom of the track, but that I had the skills to be up with the top girls. This just gave me even more fire to race next year and train hard this offseason.”

Just what does it take to finish in the top ten at a World Cup?

“If I were to try and pin down [the reason I was able to do so well], I would say my work ethic. I train as hard as I can and push myself on every ride. I often time myself on my local DH tracks and I consider it a bad day if I haven’t gotten faster on track. I’m always pushing myself and trying to be a better racer, whether through skills or fitness and I think my dedication to training has really paid off in these good results. I’m religious with my training schedule and keep track of every workout and ride and hold myself accountable for any missed sessions. It’s a lot of work but it’s clearly starting to pay off. Of course, I don’t want to stop and I’ll keep pushing to get better.”

When asked about role models Kate mentioned that she looks up to the best, “especially the likes of Rachel [Atherton]. Her skill and speed is incredible and I set my sights on being as quick as her. I’m also a big fan of Loic Bruni as he’s a pretty humble and down to earth guy and his riding style is effortless and beautiful to watch and really inspires me. If I’m honest though I’m just in awe of all the top riders!”

If you have plans to visit New Zeland in the future, Kate has a few trail centers to suggest. They more or less include the whole country.

“My favorite place to ride in NZ would have to be either Queenstown bike park or the Rotorua redwoods. I honestly can’t pick one. Queenstown is awesome and has big jumps and a lot of gravity riding, but for me, Rotorua just has such a huge variation of trails and I love the native forests you ride in at Rotorua.” 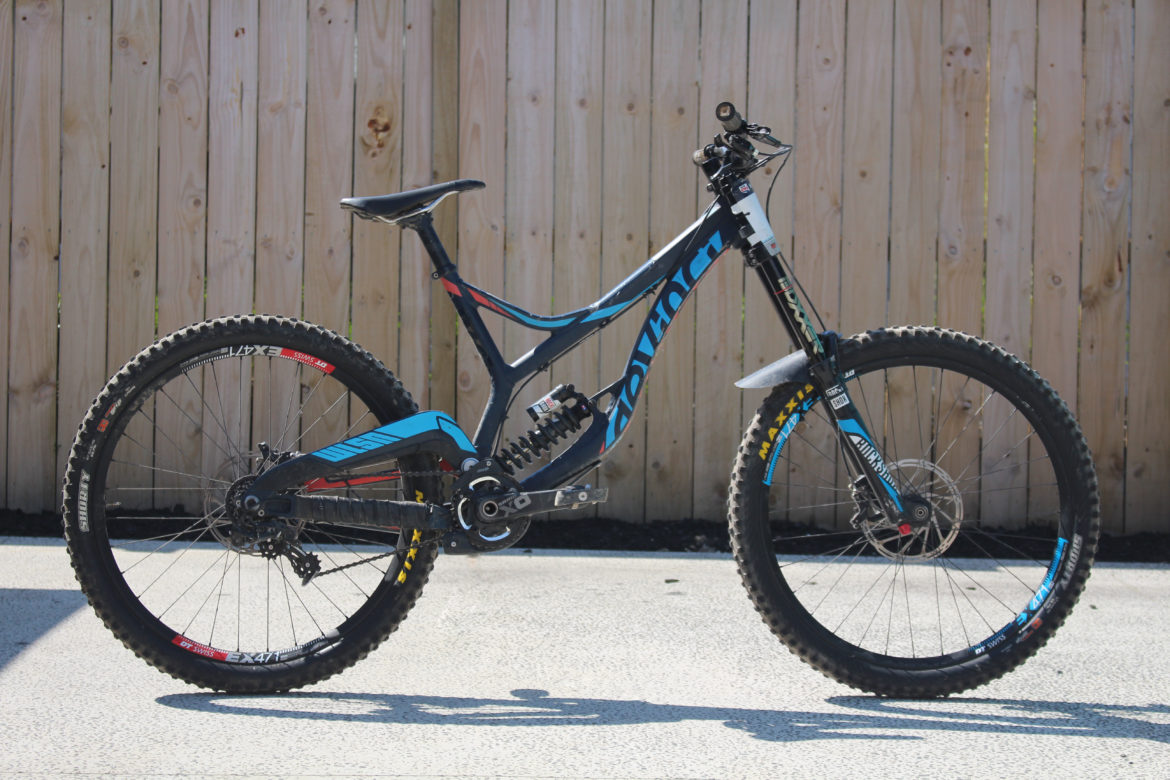 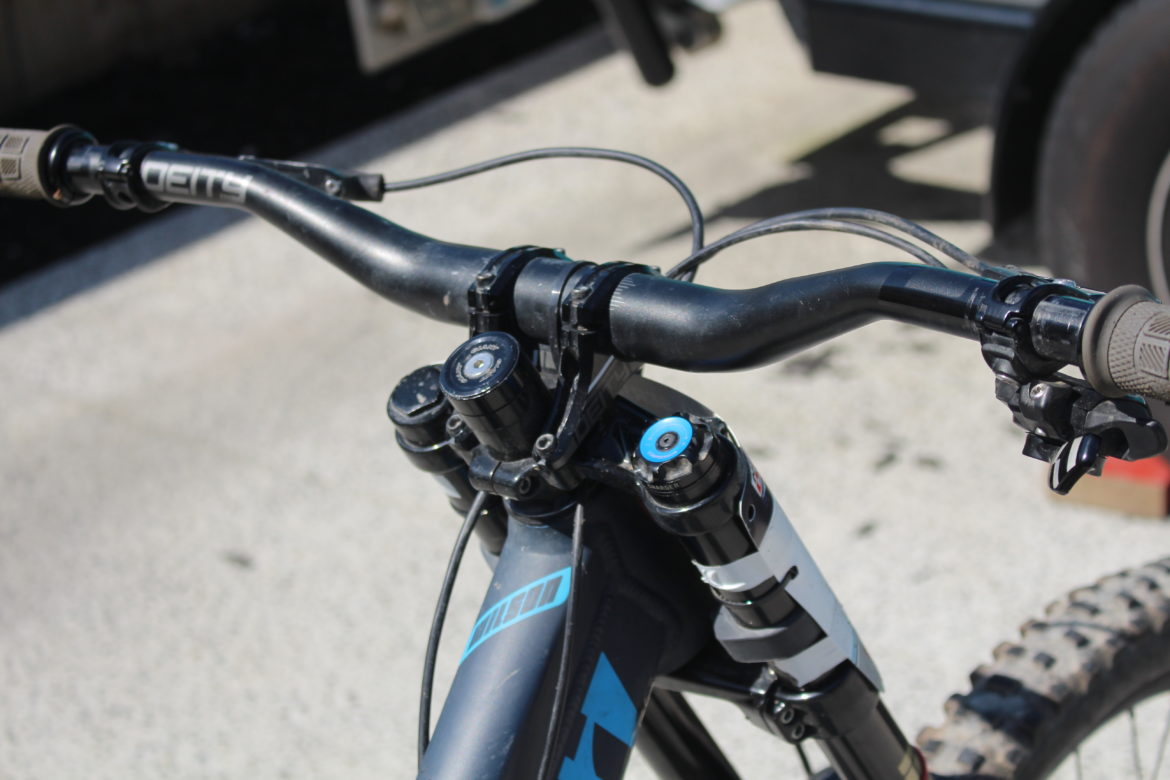 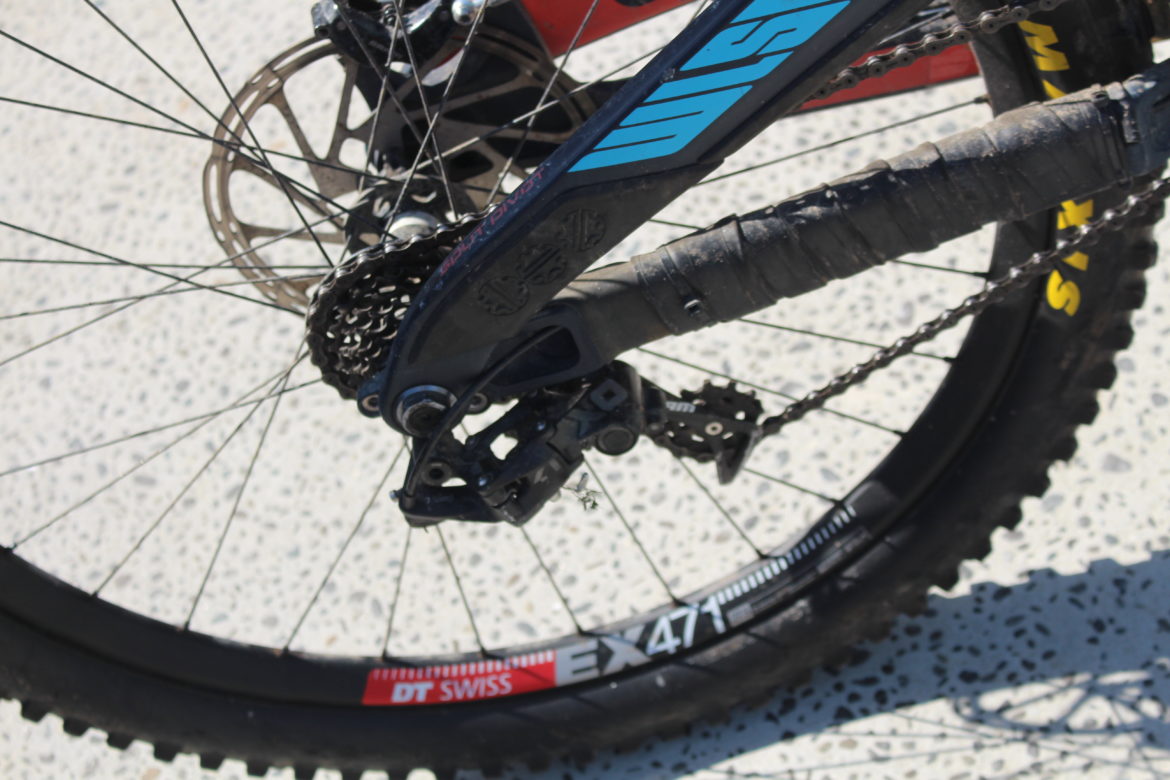 Additional details: “I run my brakes pretty flat, and bite point around the middle of the stroke. I run my rebound and compression pretty hard and fast as I’m fairly active on the bike and I find that harder suits me better. I’m currently riding a full Deity Components build kit (Deity Intake DM stem, Holeshot 35mm bars, Pinner DH saddle). [And for wheels] DT Swiss EX-471 Rims and 240 hubs, along with Maxxis tires. My favorite [tread] combo is a DHR rear and a slightly cut Shorty on the front.”

Slammed bars and a tiny, high-gear cassette: this bike is prepped for one thing, racing!

You can follow along with Kate’s training and racing updates here.

Gear
The Full-Carbon 2021 Giant Trance X Advanced Pro 29 is...
Gear
What is 'Too Heavy' for a Mountain Bike?
Trails
Surfing Duff, Making Connections and Chasing Foxes in McCall, Idaho
Trails
Crushed by Crosier: Searching for Singletrack in Estes Park, Colorado