Smashed kneecaps, broken forearms, skull fractures, gnarly, full-thickness lacerations and sutures. (“Woah, that’s my muscle fascia!”)  Sound familiar?  Is that because you’re one of the statistics?

If general participation in extreme and adventure sports required a blanket contract, this clause would most surely exist: “Ride at your own risk.”  A certain and expected amount of dare is foundationally intermingled with the attraction to the sport – this is known when the decision is made to partake.  But, everyone starts out inexperienced, and everyone has “off days.”  Plus, each time someone upgrades a category, or changes up their focus from XC to enduro, for example, fresh skills need to be obtained.  New is always new, and a period of learning cannot be avoided.  Because these stipulations exist naturally, any ride can become a gamble.

Mountain bikers have to be confident and comfortable enough to accept the risks of the sport while simultaneously maintaining sufficient awareness to avoid complacency. Complacency ultimately leads to defeat, a historical adage stated by many ancient religions and philosophies.   It definitely applies to sport.  The terrain will always win when pride or routine takes over.

Noticeable or sudden feelings of anxiety or uncertainty also follow suit – if the gut says to hold back, maybe you should listen to your primal intuition?

No matter how careful you think you are, a trip to the emergency room can happen like magic. (We’ve all had those moments where you crash because of “nothing.” Godsmack!) One thing ALL riders can do is armor up.  Helmets shouldn’t even need to be mentioned in an article about mountain biking.  That being said, many novices aren’t sure when it is appropriate (for lack of a better term) to start throwing on other types of protective gear, such as knee and elbow pads.

Furthermore, for riders that are new to enduro, downhill mountain biking, or freestyle, what about neck braces, spine guards, or even full-body protection?  And which brands are best?  All of these questions are legitimate and certainly should be addressed, but that is why there are bike shops and websites (llike singletracks.com) that provide quality reviews and recommendations by people that actually use the stuff.

The Dirt Can Hurt!

Still weary, or simply curious?  Here is a juicy lineage of the science behind injury reporting in mountain biking, along with current statistics from legitimate medical sources.

Researchers began analyzing injury rates associated with off-road cycling in the 1990s, about 10 years after the sport of mountain biking really started to take off.   One of the first major studies was conducted by Dr. Ronald Pfeiffer of Boise State University, ID, in 1994, done in conjunction with information provided by the National Off Road Bicycle Association (NORBA).  According to the data provided on that season’s elite/pro racers’ injury statistics–which did include both men and women–the legs were the part of the body that sustained injury most often.  In addition, the most common type of injuries seen were contusions and wounds.

At the time, inadequate information existed on recreational riders, which limited applicability of many study results to many that participated in the sport as a hobby, raced in a lower category (sport), or were just starting out.  Unknown were real numbers and risk factors associated with fractures and other soft tissue injuries, adequacy of helmets in the prevention of head trauma, etc.

By the year 2000, about 900,000 adults in the US had participated in mountain bike racing, and about 7.1 million adults rode in some fashion off-road, according to information derived from NORBA and USA Cycling.  Science followed the thriving trend. In 2002, Pfeiffer, along with Dr. Robert Kronish of San Jose State University, CA, conducted an updated, comprehensive scientific review of acute, traumatic injury prevalence in both competitive and non-competitive cyclists.

Overall, the data they compiled from the UCI, NORBA, and other international and national sources, suggested anywhere from 50-90% of riders have sustained some type of legitimate injury–mostly lacerations and abrasions, followed by fractures–and injury was significantly less likely to occur during a race or event.  Going over the bars (OTB) was reportedly the most common cause of serious injury, which correlates with the rise in downhill racing.  And, because going OTB was reported so frequently, it’s expected that head, shoulder, and upper torso/extremity trauma rates followed suit, with higher reported rates among riders without helmets.

In 2006, the Journal of Trauma-Injury Infection & Critical Care, published a 10-year review of mountain biking injuries that required trauma center admittance in the greater Vancouver area.  Between 1992-2002, 399 patients sustained 1,092 injuries that required serious medical attention at one of three trauma centers included in the study – that’s an average of three injuries per patient.  Approximately 66% of the patients required surgery, and one patient died.

The most frequent type of injuries were categorized as orthopedic (fractures, dislocations, tendon and ligament damage), followed by head (loss of consciousness and closed head trauma), and neck/spine injuries (mostly cervical spine, with 1 in 4 injuries involving the spinal cord).  The most commonly fractured bones were the tibia and radius.  In addition, the overall injury rate was increasing–it tripled over the investigated 10 years.

Another review of US emergency department admissions reported that 217,433 patients were treated for off-road mountain biking injuries between 1994-2007, which averages to be about 15,000 people per year (see figure below). The majority of patients suffered arm, collarbone, and shoulder fractures, and riders between the ages of 14-19 were most likely to sustain a traumatic brain injury (TBI).  However, in opposition to the Vancouver study, these researchers found that the total rate of injury significantly declined over the 13 years, even though the number of adults that have reported mountain biking at least once reached more than 8 million in the late 90s, but steadily decreased thereafter.  This could also be due to developments in bike technology (disc brakes, dual suspension), allowing for better bike handling, and improved helmet construction.

Progression of the Sport

Since then, many areas of the sport have branched out and flourished, especially downhill.  As bike technology has progressed, so have the challenges we are taking on – slopestyle, freeride, super D, urban downhill, and any Red Bull or Crankworx event–all complete with near-vertical drops and crazy-ass lines winding through historic villages and canyon lands.

Whistler Mountain Bike Park reported 898 injuries during the 2009 season alone, according to data from the Whistler Health Clinic.  Of the injuries, 420 were fractures, and 11.2% of the patients had sustained some type of TBI.  Nearly 9% of patients had to be evacuated to a higher-level facility, seven of them by helicopter:

A 2015 study published in the British Journal of Sports Medicine aimed to analyze the rate and cause of injury in elite/pro downhill riders over the course of one season.  Among the 249 riders involved in the study, the most frequent location of injury was the lower leg, and the pros had a significantly lower rate of injury when compared to the elite riders.  In addition, nearly 41% of the severe injuries kept the athlete off the bike for more than a month.

The majority of injuries were found to be caused by riding errors.  And, in opposition to earlier conclusions, an injury during downhill riding was more likely to happen during competition versus practice.

We Have Learned A Lot

Injury reporting and research techniques have improved greatly.  Scientific consistency is always essential, and fortunately, it is what we are receiving. In the last 25 years we have been able to determine that intracranial hemorrhages are the most common cause of death among mountain bikers, even though upwards of 90% of riders wear helmets.  In response, helmet technology has improved greatly, and fatalities are extremely rare.  In addition, most injuries occur during competition or other planned events (tricks, jumps), so safety guidelines established by researchers, manufacturers, and the sport’s governing entities have followed suit.

It is essential to note that many riders reported in these studies were wearing some additional type of body armor.  What does this mean?  If riders can get injured with armor, they can REALLY get injured without it.  Basically, if you’re thinking about it, wear it.

You have but one body, and being safe is way better than learning the hard way, even though a lot of us have ironically chosen to gamble.  What’s your excuse? 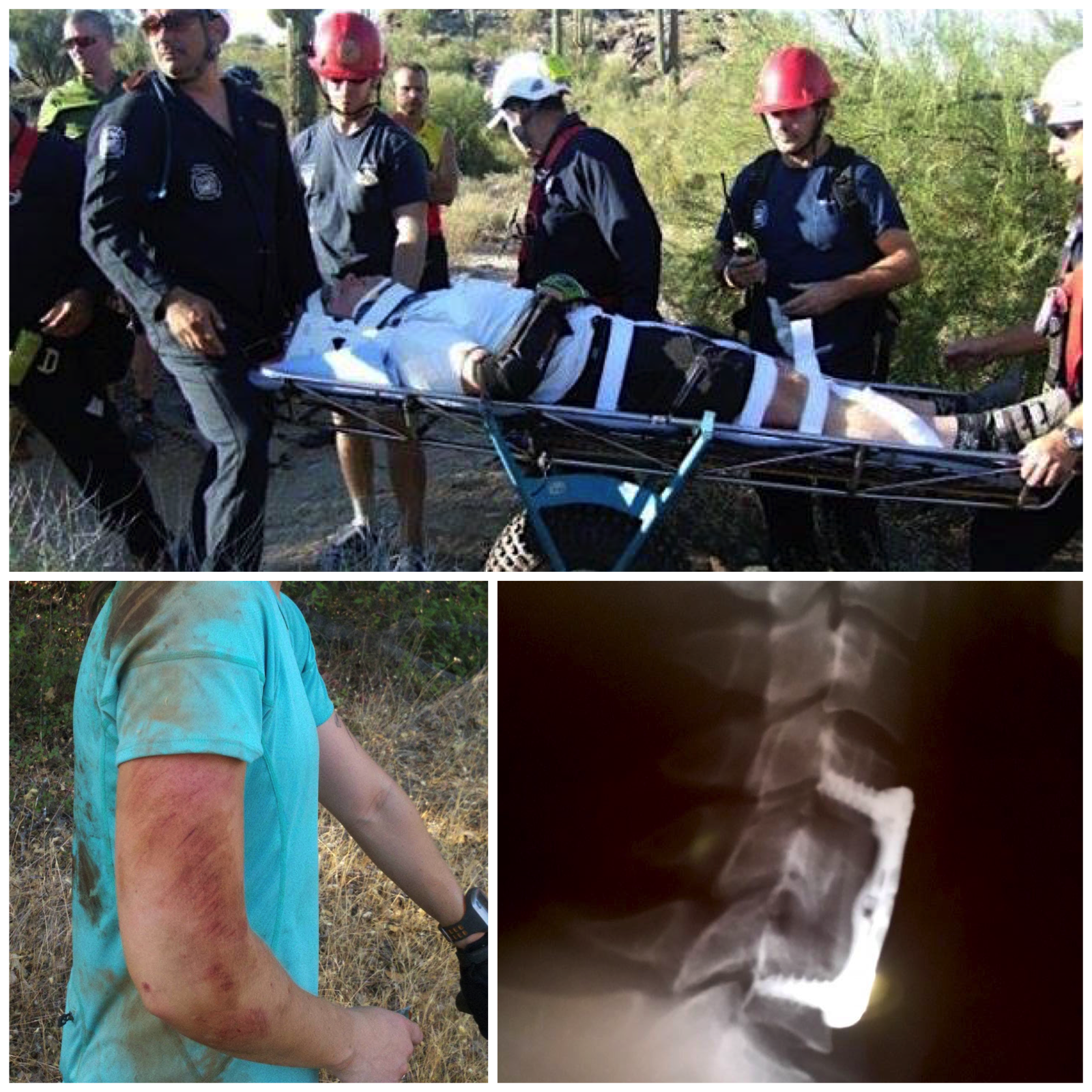 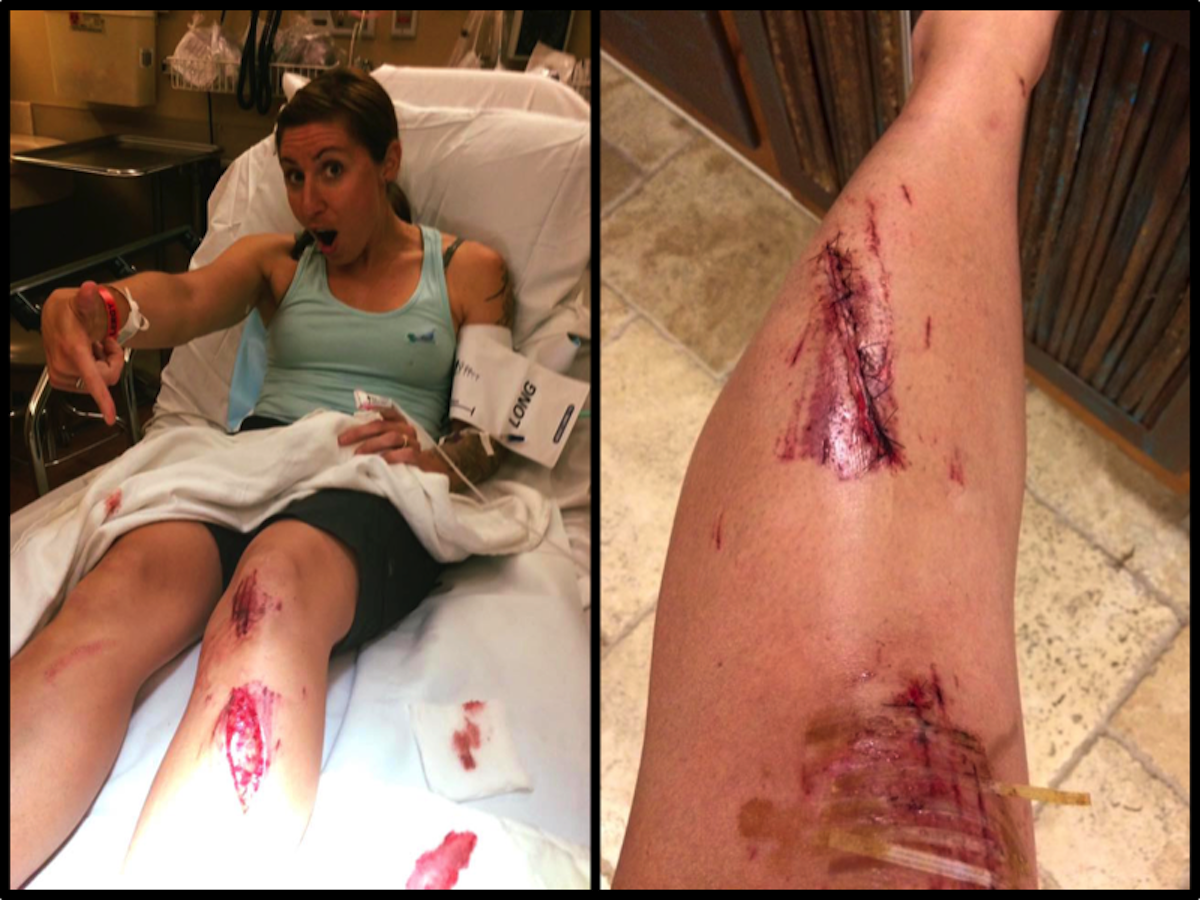 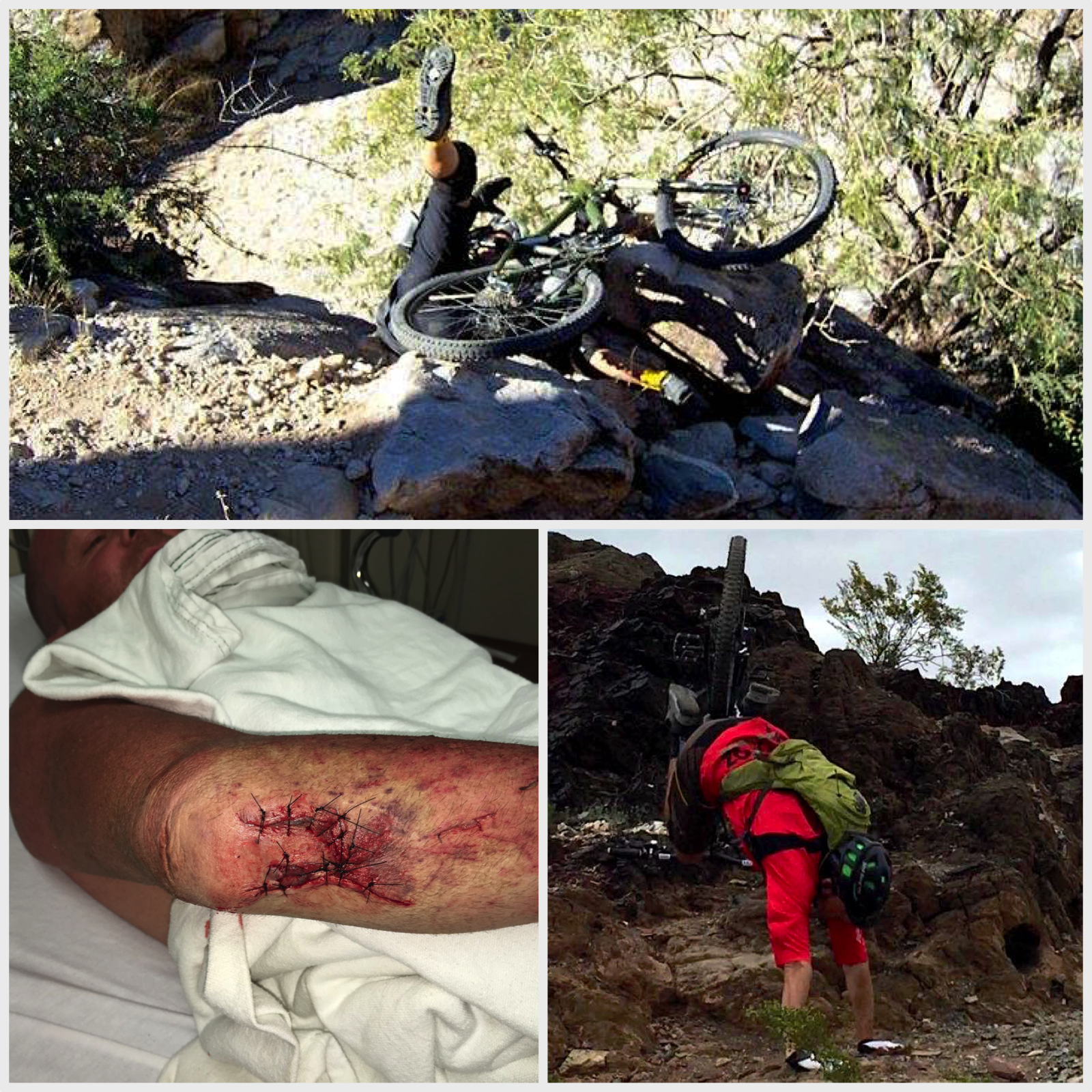 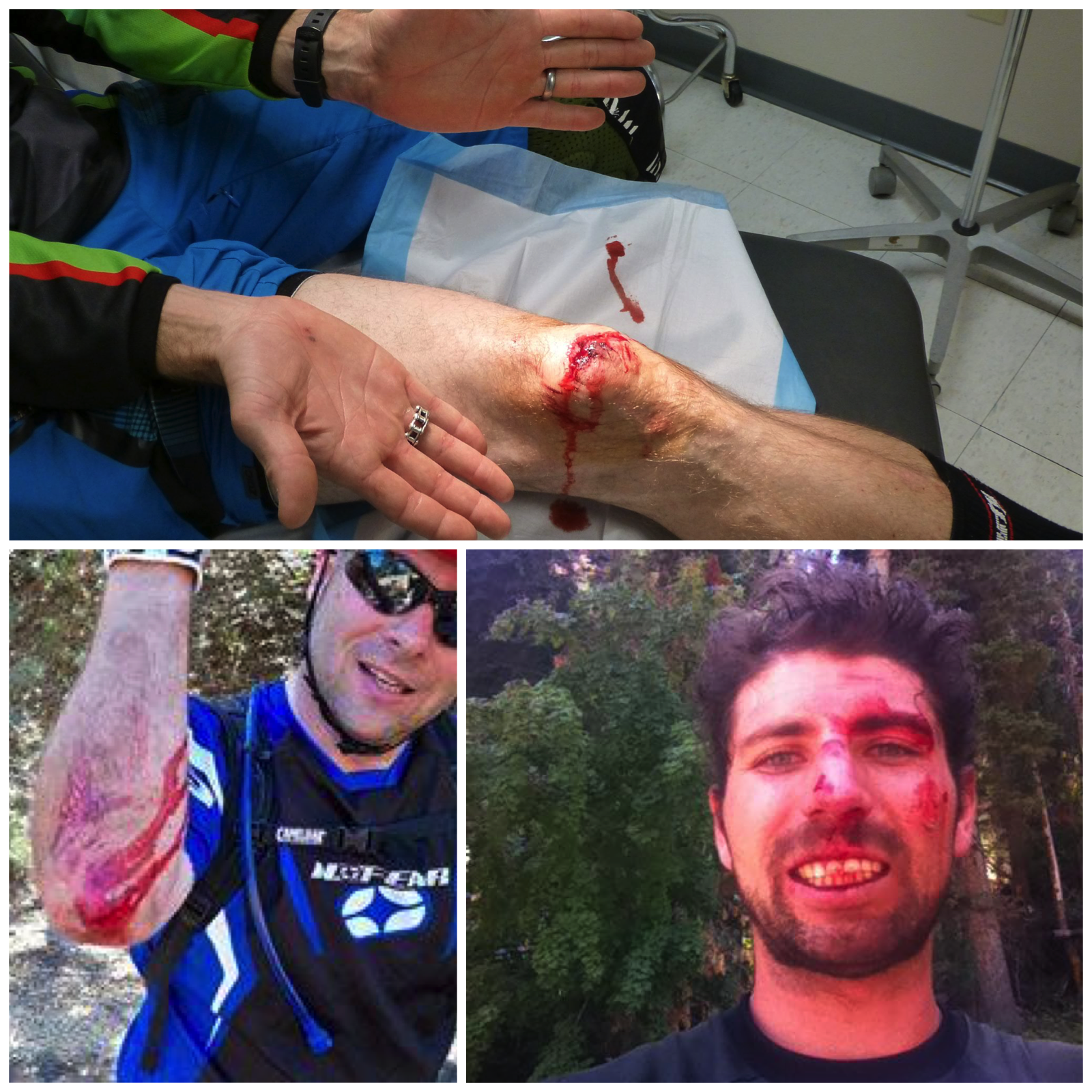 Jenny Corso
Jenny is a professional scientist, biochemical exercise physiologist and regular contributor on Singletracks.com. She is also the founder of truPhys, where her mission is to construct a bridge between the common public and health information published in well-ranked, peer reviewed scientific journals. She fell in love with mountain biking after leaving the military and moving to Chico, CA in 2011. She currently shreds trail all over AZ, where she's lived since 2015. You can follow her on Instagram @jenniferlynncorso. Happy shredding!