Adoption is one of the most altruistic acts that human beings can perform. By opening up their hearts and letting in those that have been neglected, people can demonstrate what it means to truly care.

I’m all for adoption in many forms, from a needy child to a rescue dog from a shelter, however, this tale of adoption deals with a mongoose. More specifically, a Mongoose of the two-wheeled variety.

While riding home from work on Earth Day, with the sun shining and the magpies singing, I couldn’t help but indulge my inner hippie and let my mind wander about environmental issues big and small. Should I pick up more trash that I see along the trails? Can wind energy replace coal power? If it’s yellow, does letting it mellow truly reduce water consumption? Should I pick up one of these bike frames that the hobo camp left behind?

Clearly, one of these questions is more pertinent to this website’s readership.

As I unclipped from my bike and rolled to a stop, the seed of a idea for a project bike began to take root in my brain. Having just watched the truly fantastic Hack Bike Derby, my desire for a klunker was at an all time high, though the more financially prudent section of my brain kept reminding me that I didn’t need to spend a potentially unreasonable amount of money to obtain one. What fortune, then, to have this pile of abandoned bikes sitting directly in my path. Of the three frames, only one seemed to be salvageable and worth keeping away from the scrap yard: an early 90s Mongoose Rockadile, a rad bike based on name alone. I slung the remains of the bike over my shoulder and pedaled the rest of the way home, pondering what parts I would hang from the newly-saved frame.

Though stripped of most parts that would be worth a quick buck, the Rockadile was in surprisingly decent condition. The frame was straight and the fork seemed unmolested, the only damage being cosmetic due to what I can only imagine was a hard past life spent (hopefully) ripping through the local singletrack before it was unceremoniously stolen, stripped, and abandoned in the woods. Only two components remained on the frame, serving as a bit of a reminder of how far mountain biking technology had come–an almost full set of linear pull brakes and the notorious, knee-destroying Shimano Biopace crankset. Essentially, I had been gifted a clean slate by the cycling gods (praise be to Merckx) and I wasted no time in removing the old relics of a time long since past from the frame.

In keeping with my desire to have a basic, low-cost klunker, I began poring through my boxes of spare bike parts in search of anything worth bolting on to the frame. A spare set of pedals, an old singlespeed chainring, period-correct Oury grips, and some miscellaneous hardware proved to be a good start to the project, but not nearly enough to make an entire bike. As word got around that I was building up a bike, a friend of mine who was going through the joyful process of packing up for a move told me that he had a bunch of old parts that were destined for an unceremonious donation to a local landfill. I did what any responsible bike scavenger would do–I threw on my largest backpack, pedaled over to his garage, and proceeded to clear out his spare parts bins. James, I owe ya a beer or five.

Though the parts pile was now substantially higher than before, there were still key items missing for the klunker build. When it comes to sourcing parts for bicycles online, I’m a bit inept, and the prospect of spending hours staring into the abyss that is Craigslist was far from appealing. I’m of an old school shopper who prefers the social aspect of bike shops as well as the tactile sensation of actually seeing things in real life and thankfully, Anchorage has a number of places that cater to people just like me.

Over the course of the next couple weeks, I made my rounds at some of my local favorites ranging from the higher-end shop, Speedway Cycles; to the gear consignment emporium, The Hoarding Marmot; and last, but certainly not least, the treasure trove that is the local bike co-op, Off the Chain. Between these three fine establishments, I was able to scrounge together enough parts and pieces to bring my klunker dream into reality.

The finished product of all my labor and $115 of money well-spent yielded something that would have had all the riders drooling if it was 1994. The chromoly steel frame and fork painted in eye-catching teal, topped off by the Marin 130mm stem clamping the shadow chrome riser bars adorned with Dia Compe 294 brake levers; the polished Campagnolo front and Shimano Parallax rear wheels wrapped in the finest of fine mid-90s rubber–the WTB Velociraptor; the Shimano RX crankset with RaceFace 32-tooth chainring and bash guard; the Paul Components Melvin chain tensioner hanging where a rear derailleur once was; oh yes, it is rad. However, to be a truly good product, a bicycle has to be more than a spec sheet to pore over–it has to be more than the sum of its period-correct and mismatched parts. In short, it has to be worth a damn out on the trail.

Thankfully, this bike is worth at least 3 damns. Maybe 4 or 5, given enough liquid courage. 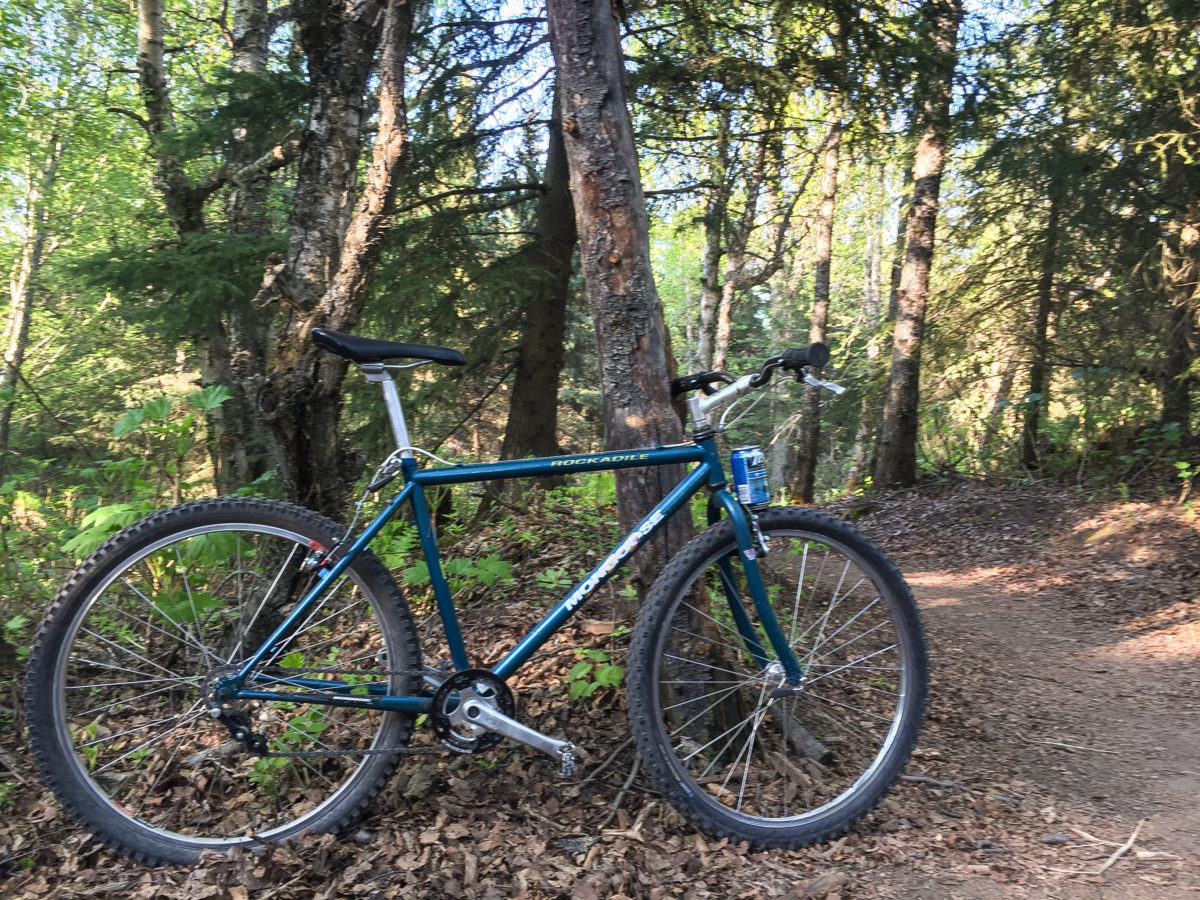 The first thing that I noticed when throwing a leg over this turquoise time machine is just how far things have come in the past two and a half decades. The Mongoose was like a distillation of all things mountain bike served straight, with no chaser. There was no suspension to mask your erroneous line choices on the trail, only one gear to pedal, and the brakes were about as reassuring as Bill Cosby offering you a drink at the bar. However, all these mechanical shortcomings brought a certain purity to the riding experience. Without a suspension fork, you truly have to pick a clean line or face the consequences; with only one gear, you experience the bliss of a silent drivetrain; with unreliable brakes, you get to spend much more time in the trees and on the ground testing your vocabulary skills. Overall, there’s some truth in what all the crazy singlespeed, rigid-framed yahoos have been saying all these years–the more you can simplify a bike, the better you will ride and the more “in-tune” with the trail you will become.

After experiencing the build process and riding the newest member of my cycling stable, I think that every rider should try to pick up and revive an old klunker for themselves. Collecting the components and installing them on to the bare frame instilled a new sense of appreciation of what all is required when a bicycle is assembled. Furthermore, the tuning that followed the initial build out solidified the satisfaction that comes from riding a bicycle whose parts all work together in complete (or somewhere near complete) harmony.

Along the way, I learned a number of useful mechanical skills, including but not limited to: packing a bottom bracket, properly routing cables, adjusting a headset, truing wheels–essentially if it has to do with bicycle maintenance, I now feel confident that I can figure out how to make it work.

If nothing else, riding a bicycle that was originally on a showroom floor 25 years ago brings an appreciation of how good things are now in the mountain biking world. Be sure to keep your eyes peeled while out riding–there may be a chance for you to turn what was once considered trash into a cycling treasure and experience the joys of building your own ride on a modest budget.

Great read!! Thanks for sharing. How did you feel after that 24 hour race?

Happy to hear that you enjoyed it! Let’s just say that the 24 hour race left me feeling a bit worse for wear haha.

Cool article! I have done the same with a few Diamondbacks from the early 90’s I gave one to my brother inlaw and the other I sold for 20$ which almost got all of my money back from the parts I bought. These bikes were more complete but still needed bars, pedals, cables and rear derailleurs. Pretty cool feeling to resurrect an old trail warrior.

There is a certain level of joy being able to ride something you built yourself, isn’t there?

Cool article. At first glance, I thought this was the same frame that I have sitting in my basement. My first mountain bike was a fully rigid GT Pantera AL, but I only had it for a few months before I happened across a 1994 Mongoose IBOC Comp with the bonded aluminum frame and state-of-the-art Manitou Comp fork. I quickly changed out the single elastomers in each fork leg for a Manitou 4 stack in one side and an Arlo Englund oil damper in the other. That ‘Goose went through many iterations during it’s life of trail duty and XC racing, eventually ending up with a dual-crown Rock Shox SID XL fork and Shimano mechanical disc brake on the front and XT V-brake replacing the old center-pull on the rear. Stem was a flexible CNC hollowed-out 150mm Critical Racing deal. Pedals started as Onza HO’s (elastomer spring) but were eventually swapped to something with more consistency. I still have the battle-scarred frame hanging in my basement. Still as stout as ever; heck, the rear dropouts on the trademark Mongoose loop-tail about machined from about 3/8″ thick aluminum plate. Lots of fond memories on that bike.