It’s been raining nonstop, so we’re going to talk about something different today. Clamping dropper posts.

Many of us use a repair stand for wrenching our bikes. Most of these stands hold bikes by clamping the seat post. From there, the clamp can be locked into whatever position is comfortable. Repair stands like these have been used in bike shops for many decades.

Except now, even mid end mountain bikes come with dropper seat posts. These rather expensive seat posts can be adjusted from a switch on the handlebars, which gives the rider the ability to get their seat out of the way on the fly. I personally think it’s the biggest improvement to trail bikes since the suspension fork, but that’s a topic for another video.

While they may seem like glorified office chairs, dropper seat posts are pretty refined. They’re compact and lightweight. They’re designed to endure the stresses of mountain biking, but it turns out those stresses are much different from those inflicted by a bike repair stand.

Let’s talk about how a stand can ruin your dropper post, and some of the ways mechanics deal with this. First of all you should avoid scratching the stanchion of your dropper post. Scratches can cause abrasion on the seals, which only worsen with use. If your stand’s clamp is covered in dirt from another bike, you could be forcing sand and rocks directly into the surface of your post, causing abrasions. This could potentially ruin your post.

Also, bike stands can be locked into different positions. Even on a featherweight road bike, there’s a considerable amount of force being put on the seat post for it to stay in this position. On a dropper post, that’s not good either, especially when it’s done repeatedly for long periods of time.

Sometimes you can avoid this altogether by raising the post slightly and clamping it on the body. Some even clamp the collar, which seems like a lot of stress to put on this little part. I’ve also seen a shop towel thrown into the mix to protect the stanchion.

Considering all the bad things that can happen from clamping your dropper post, it’s no wonder that people will generally tell you not to do it. There’s no guarantee that your jaws clean, and you most certainly can’t be trusted to clamp your bike in a stressless position.

That is, unless you clean your jaws and clamp your bike in a stressless position. In other words, it might be okay to clamp a dropper post if you understand the implications. Look, when you clamp your bike just leave the stand loose. The bike will fall into its natural position, putting no appreciable lateral force on the internals. Sure, the bike is pulling on the post, but that’s no big deal for one repair session. In fact, demo bikes hang from their dropper posts for entire seasons, and my bikes are always stored that way. This might not be so good though.

Nevertheless, I clamp my dropper posts, right on the friggin stanchions. But you didn’t hear it from me, you heard it from Alex.

A lot of you are actual bike mechanics, so chime in and let me know what you think. Let’s have an argument. Is this a lazy approach to bike repair? Should you just always raise the post enough to get the clamp on? Where else can you clamp a bike, specifically a carbon bike, without stressing an even more expensive part? Let me know in the comments. Thanks for riding with me today, and I’ll see you next time. 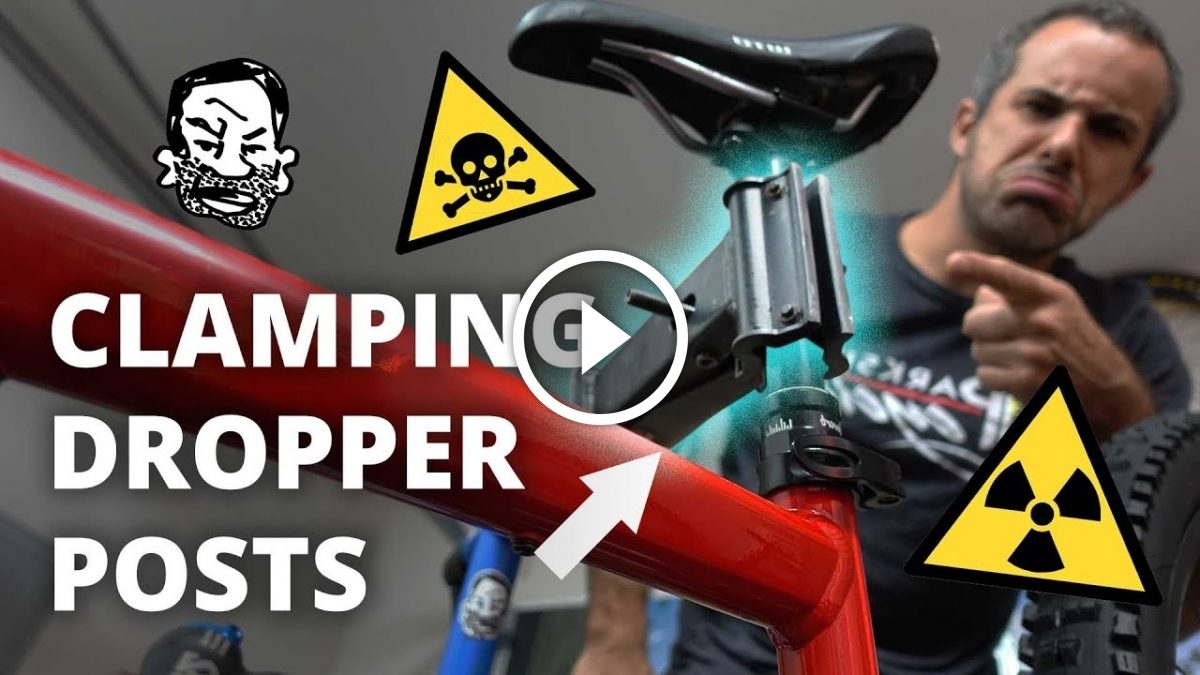 Culture
Amenities at the Sedona Trail House Include Guided Rides and...
Culture
Trek Releases New Fuel EX and Remedy for 2017
Gear
New for 2017: Scott Releases Two of the Lightest XC...
Gear
The 10 Best Hardcore Hardtails for Getting Rowdy

No idea if it’s *really* good or bad as I’ve heard and read arguments both ways. That being said, my personal observations are that most bike shops have NO ISSUES WHATSOEVER clamping directly on to the dropper portion (stanchion) of the post. Most likely because…..A) it isn’t their bike and B) it’s much faster for them

“Most likely because…..A) it isn’t their bike and B) it’s much faster for them”

Ha! I was thinking this as well