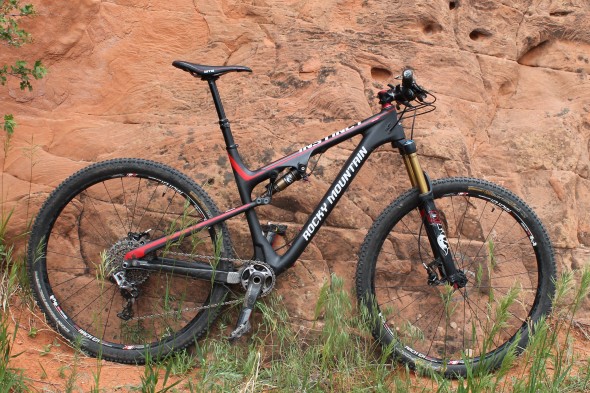 I rode a first generation Instinct in 2001, and it’s safe to say this is an entirely different beast. Back then, the Instinct was just a Rocky Mountain Element (their full suspension cross country racer) with disc brakes. While both the Element and Instinct lines have grown into 29ers, they have departed from each other in numerous ways, with the Element remaining a cross country racier, and the Instinct occupying the trail bike segment with a slightly burlier frame and more neutral geometry.

The Instinct 999 is made with Rocky Mountain’s patented Smoothwall carbon, which Rocky claims allows them to manufacture a frame with the best stiffness-to-weight ratio on the market. Upon pulling this bike out of the box, I was immediately struck by the light weight and, while I had no objective way of measuring it, the bike did indeed feel very solid.

Despite the obvious brawn, the frame is svelte and drop dead gorgeous with its satin black finish and lady-in-red accents. I would have been happy to just set the thing on a pedestal and stare at it all day. But the ride’s the thing, so it wouldn’t sit idle for long.

The Instinct features Rocky’s proprietary Smoothlink suspension, a true four-bar system which, unlike the Horst Link, places its chainstay pivot above rather than below the axle. The cynic would say this is just a clever way of avoiding violation of the Horst Link patent. Rocky claims it keeps the bike active across a wider range of gear ratios and enhances bump absorption without affecting pedaling efficiency. Only the coming rides would tell.

While the minor variances in pivot type and location are easily overlooked by the casual observer, a unique standout feature of the Instinct is its incorporation of Rocky Mountain’s Ride 9 ™ adjustable geometry system. Two interlocking chips may be rotated three ways each for nine possible locations for the mounting position where the head of the shock meets the frame. While nine possible geometries are possible, it’s not like any individual rider may reasonably have nine different frames.

Rocky Mountain went almost all out with the component package on the 999 MSL. The first thing one notices is Fox’s Kashima-coated suspension on both the fork and rear shock. I had been reading a lot of tech talk about this supercoating and was curious as to if it would actually provide a noticeable difference in suspension performance; after all, isn’t having suspension itself crutch enough?

The suspension also employs Fox’s climb/trail/descend feature. A quick press of a remote button on the handlebar runs the rider through all three possibilities in the rear shock, as does a simple turn of a lever atop the right stantion of the fork. Speaking of suspension crutches, the Instinct is also smartly spec’d with a Rock Shox Reverb adjustable on-the-fly seatpost. 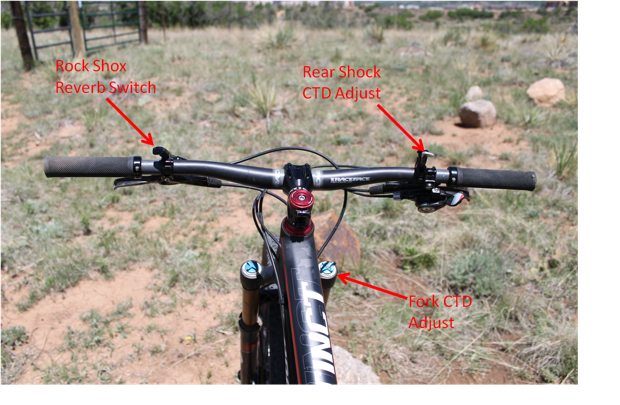 The extra features in the Rocky Mountain Instinct 999 MSL cockpit.

The rest of the component spec was, like the frame, chosen to provide the best possible combination of durability at minimum weight. Chief among these choices is the SRAM XX1 1×11 drivetrain. I had only ridden one bike previously with a 1x and found it lacking, but that was a burly 32lb Yeti Seven all-mountain monster. This smartly spec’d Instinct tips the scales at a scant 25 and change with pedals, so I was curious to see how tough it would run without a small chainring.

Race Face Next SL cranks round out the drivetrain and provide the power to the Stans ZTR Arch EX tubeless-ready wheelset. Part of the weight savings came in the 2.2” Continental Mountain King tires. I have recently become a fan of Mountain Kings for their combination of aggressive tread with reasonable weight and rolling resistance, but the 2.2s looked rather skinny on the big 29” hoops for an aggressive trail bike. Again, the ride would tell.

Sub-26lbs is crazy light for a bike supposedly up to the challenge of all-day epics over rugged terrain and the rigors of enduro racing. As you may guess, all this light weight durability comes at a price: in this case an MSRP of $7,599. After the panic of the initial sticker shock, I considered the bike in light of other high end offerings. This bike is just an Enve wheelset short of being one of those $10k superbikes everyone from mass merchandisers to boutique shops seems to be putting out these days. Considering that, the spec is actually quite good for the price, especially given the features of the frame. Beyond that, the Instinct is supposedly versatile enough that it could replace all the bikes currently in most garages. Again, only the ride would tell… stay tuned for the final ride report! 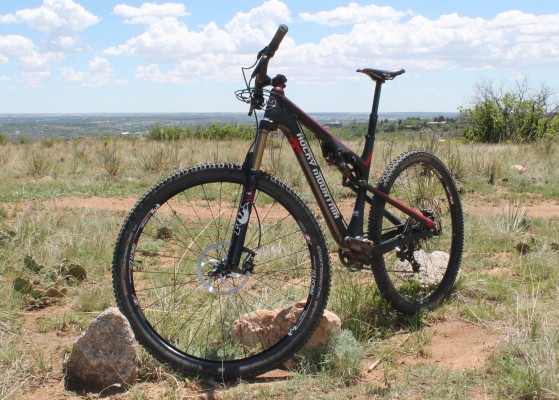 Thanks to Rocky Mountain Bicycles for sending down the Instinct 999 MSL for review!

Such a beautiful bike! I love the concept of the Ride 9 chip… everybody is different, and likes to ride their bikes differently, and this adds incredible versatility all in one bike!

Great pics! Love the idea of a 29er Trail/Enduro bike. I need to give this one a try!

That is crazy light. I am anxious to hear how stiff the bike is. Knowing Rocky Mountain it should be good, but you never know. Being that light doesn’t mean anything if you can’t hold a line through a rock garden.

I think the bike is spec’d really well except for the wheels and tires. While I haven’t owned a pair myself, everyone I know who had a bike with Stan’s wheels ditched them as soon as they could due to how flexy they were, but they very well could have changed that in the last few years.

I used to run the mountain kings as well but gave up on them. I kept having the casings fail. The tire would look like I really bent the wheel but it would just be the tire. I switched to Trail Kings and have been with them ever since. The rolling resistance isn’t as good as the Mountain Kings, but they grip really well.

Looking forward to your ride impressions.

What pedals are you riding on this bike? Thanks!

I ported over the pedals from my regular all mountain bike. Shimano PD-M424. Nothin’ fancy–entry level clipless/platform combo. Probably the heaviest thing on the bike!

Bike looks like it would be a great ride.. I run Trail kings and mountain kings and like them both.

It’s pretty, that’s for sure. The ride 9 chip sounds like a good idea, not sure if its for me. I’m too indecisive. I would go ride for 3-4 hours and only get a mile or two in because I would be tweaking the settings every 5 mins.